When Indigenous rapper Ziggy Ramo was asked to perform and speak on the ABC’s popular Monday night talk show, Q+A, he knew exactly which song he wanted to play.

It was a track called ‘April 25th,’ which compares the veneration of the ANZACs to the way Indigenous Australians have been displaced and oppressed, going to the heart of Australia’s tendency to selectively remember and forget parts of our own history. Ziggy wanted to make the point that there’s a double standard here and it’s rarely acknowledged. He explained the song and its importance to the producers at Q+A and he says they responded with encouragement. He was all set to perform it on live television, but 72 hours before he was scheduled to go on the show, he got a call from the producers who explained that he would have to play a different song.

For context, ‘April 25th’ contains some pretty controversial lyrics. Ziggy repeats the words ‘Fuck those wack blacks’ 14 times. He also says ‘Fuck those ANZACs’, and that was the part that the ABC was most worried about broadcasting. Ziggy offered to tone down the language, replacing it with ‘hate those ANZACs’ or ‘forget those ANZACs’, but the message from the ABC was clear to him: ‘They said, “You’re not allowed to do it. It’s not happening.”’

‘I was basically censored,’ he said live on Q+A during the discussion segment. ‘Me sitting on this panel ticks a box for the ABC that is cultural diversity. But if I’m not able to express my perspective, is it performative or is it actual cultural diversity?’

It was a tense moment of live TV. The footage caused a bit of a stir online and it was all over news websites the next day. At the end of the show, Ziggy performed one of his other songs, ‘Stand For Something’, and appeared teary and overcome with emotion. He later shared the footage on Instagram and wrote, ‘I blacked out during this performance. Was in deep trauma response.’

Four days after Q+A, I interview Ziggy over the phone and he’s incredibly eloquent and passionate, just like he was on TV. He speaks with the confidence and precision of a politician or an activist, relating his lived experience as an Indigenous man and quoting some of the specific laws and policies that have historically oppressed Indigenous people.

Of the Q+A incident, he explains, ‘If you are going to invite me onto the show to tick the box of cultural diversity but then not allow me to speak my culturally diverse truth which might challenge your audience, it completely undermines that act. I’m not grateful for a seat at a racist table, I’m going to sit at that table and speak my truth.’

He continues: ‘The song ends with: “Learn to love the blacks the way you love our ANZACs.” The whole sentiment is saying we need to love all parts of our history equally and recognise all sacrifices… In this country we say “Lest we forget” but then when we talk about indigenous issues, we say, “Get over it.”’

For many, the Q+A appearance was the first they’d seen or heard of Ziggy Ramo. But for those who’ve been following him for a while, the up-front, unapologetic honesty was exactly what they’d come to expect from the Sydney-based rapper. His debut album, Black Thoughts, was released in June 2020 and it’s a highly political and challenging hip-hop album from start to finish. Ziggy’s first words on the album are, ‘Race relations got my mind racing’ and from there he explores the theme by zooming in on numerous topics, ultimately holding up an uncomfortable mirror to white Australia. Between tracks, he interweaves soundbites from historical sources and news broadcasts, addressing blackface, Australia Day and genocide.

Sorry to let Andrew Bolt down but I thought it would be unsafe to perform on a street corner in the middle of a global pandemic. In unrelated news you can catch me performing live at the @sydneyoperahouse on the 29th of August. It will be live streamed. Link will be in my bio. This is 5 years in the making I can’t wait to show you the full performance of “Black Thoughts” with animated visuals by the amazing @kambarni ❤️

One of the most interesting parts about Black Thoughts is the delay of its release. Ziggy wrote the album five years ago, at a time when he was suicidal, and he has since described the record as an obituary. He didn’t release it back in 2015, partly because he was hospitalised and on suicide watch, and partly because he didn’t think Australia was ready. When he did finally release it, at the beginning of June 2020, he explained to his followers, ‘I wrote this album five years ago while I was hospitalized. I was in a dark space and on suicide watch. It was my obituary. I wanted to document my thoughts so that our stories could be heard after I was gone.’

George Floyd was killed by police on May 25, 2020, and as the #blacklivesmatter movement gained momentum, Ziggy decided that he shouldn’t wait any longer to put the album out. It was already five years old and yet still utterly, heartbreakingly relevant. He told NME at the time, ‘It wasn’t about how many streams I could get; if it was gonna get a Feature Album on triple j, or if I was gonna do this as my debut album… It was like, ‘This needs to be out now.’

Ziggy partly grew up in Arnhem Land, where he and his siblings were the lightest skinned kids in the community, before they moved to Perth where they were the darkest skinned kids. His parents are both teachers in the public system and their family moved around a lot. But when Ziggy was 12 or 13, he decided he wanted to go to boarding school in Sydney, applying for a scholarship at The Scots College, one of the most elite and expensive schools in Australia. It was a conscious decision on his part; he sought to understand the corridors of power.

‘I need to learn about my non-Indigenous lineage,’ he explains. ‘I need to know more about the oppressor. I need to know the language of power in this country. So I just felt that the only way to do that is to go to the elite. I need to understand what is being taught to these people who are going to end up in government positions.’

‘I think it’s very funny when people are like, “Oh, you should be so grateful that they gave you a scholarship.” It’s like, we literally built them an Indigenous program that they take millions of private and government funding from. I think it’s balanced out. And on top of that, these kids have basically never interacted with an Indigenous person in their life so every day I’m a spokesperson and an advocate and teaching people. I’m speaking at events, I’m doing the whole thing for them, I’m on their brochures because I’m an academically gifted Indigenous person that makes them look amazing.’ 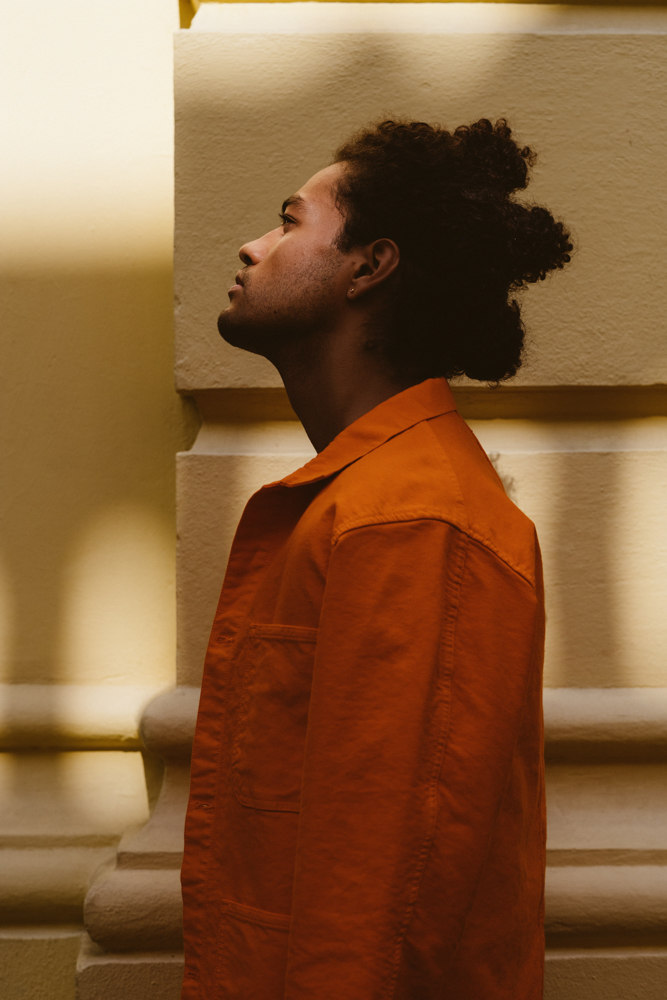 Ziggy went on to study a Bachelor of Science with a major in anatomy and physiology. His second major was Indigenous knowledge and heritage. He got accepted into postgraduate medicine but decided to be a rapper instead, reasoning that he could always pursue more education later. Ziggy has the powerful combination of being highly educated and confident in his ability to express his ideas. Going back to Q+A, he tells me, ‘I knew that I was going to be soft and gentle and eloquent for an hour, talking to Australia and they were going to be able to connect with my education and my eloquence and the fact that I could talk white.’ After that, he could hit them with ‘the sledgehammer’ of his music.

Ziggy’s next focus is a gig at the Sydney Opera House on August 29, where he’ll be performing Black Thoughts in its entirety via livestream. It’s part of a series called ‘From Our House To Yours’ and he will have a 10-piece live band behind him. For Ziggy, performing in the country’s most iconic music venue is an important opportunity for decolonization.

Ziggy Ramo will perform Black Thoughts at the Sydney Opera House in a live-streamed performance on Saturday 29 August at 9 pm. Featuring a 10-piece band and animated illustrations by Kamsani ‘KamBarni’ Bin-Salleh, it’s one not to miss. Head to sydneyoperahouse.com to add to your calendar.