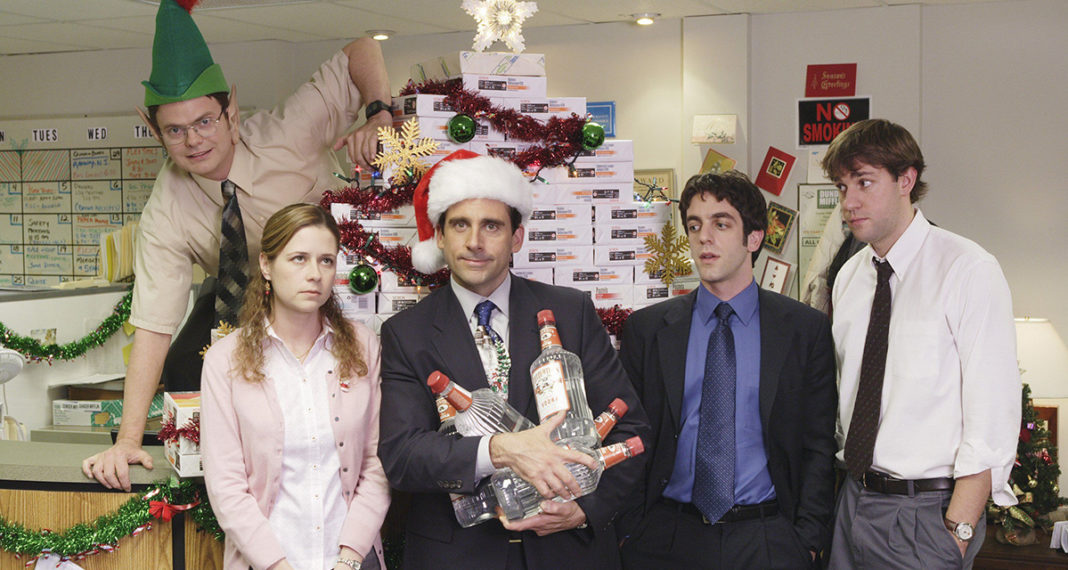 Deck the bloody halls because it’s that time of year again.

Debbie has her light-up Christmas wreath earrings on, Sally wants to know who you got for Kris Kringle, and Martin is asking if anyone knows a guy (wink wink). It’s all happening. But how do you make sure you don’t end up kissing a colleague or drinking 13 shots of Brendan’s homemade eggnog? Here’s some Work Xmas Party Do’s and Dont’s to keep you safe come Monday morning… Interspersed with some cheerful Christmas.

Do put some effort into the Kris Kringle gift. If you know who you’re buying for, get them something they might actually like. If you’re tasked with getting something broad and uni-sex, you can always double down on the funny—besides, Tina will probably re-gift the sexy-body BBQ apron anyway. If in doubt, almost everyone loves booze. Other not-shit gift ideas include scratches, disposable cameras, issue 69 of Monster Children, and that coffee mug.

Don’t do shots. Yes, it’s fun to kickstart a night with a shot, especially if you’re feeling a bit dusty from the night before, but if you’ve already had 7 beers, a sambuca shot is not the answer. Doing a shot with the boss probably isn’t going to get you a promotion—unless you work in finance and then maybe it will, I don’t know. If you like tequila, get it with soda, and remember that sometimes it’s always more to be the observer of the wasted colleague than to be the wasted colleague. Live vicariously through them and wake up with only a mild hangover and no emails from HR.

Do have a couple of cheeky waters for every couple of drinks. You don’t have to be a Sober Sally, but just because it’s an open bar doesn’t mean it’s a competition to drink everything. We all like to cut-sick, let loose, get rowdy—especially at this time of year—but it’s never cute to spew in the rubber plant and pass out under a desk before speeches. If in doubt, don’t mix your drinks, choose a beverage and stick to it. P.s. eating isn’t cheating but I’d probably avoid the seafood platter.

Do dress appropriately. I don’t mean demure knee-length skirts or Christmas-theme clothing, I mean read the room. If the party is on a boat, heels are going to be bad. If you’re having a casual pub lunch, you can retire the suit for a day, and you probably don’t want to wear your Cannibal Corpse tee shirt if the median age of the office is 55. It’s nice to look nice (if you want) but comfort is also important. If you’re uncomfortable, you’re more likely to have a few of the aforementioned shots.

Don’t forget that the mistletoe is for display only. Sure, Vanessa is cute and always remembers you when she goes on a coffee run, but now is not the time. If you want to utilize the liquid courage to ask her out, that’s probably okay because if she says no you can cushion the blow with another beverage, but that pash you’re considering is probably just going to lead to next-day anxiety, not a date.

Do know when to call it; you don’t have to be the last one standing. There’s a delicious smugness that accompanies leaving the party at 11 pm when things are starting to lean towards karaoke and someone is organising another completely unneeded bag. You’ll be listening to the recounted debauchery the following day, fresh as a daisy, while they’re moaning into a Gatorade. Also, do rock up the next day with Berocca, aspirin and coffee. Everyone will love you and you’ll get away with doing just as little work as the rubber plant spewer who somehow managed to make it in.

Don’t talk about work. You’ve all been in the office (or WFH, staring into a computer screen from your living room in a nice shirt and underpants), sitting through the same meetings about projections, etc. Talking about Covid is not a fun vibe and I don’t know what a KPI is exactly, but that sounds boring too. Also, probably good to avoid making a speech unless you’re one of the Big Dogs, in which case keep it short and sweet. Imagine you’re at the Oscars, which means you have a 45 second time limit before they turn the music up on you.

Don’t bring a partner. If they happen to be comfortable with the crew, then, by all means, bring them along, but too many times have I witnessed the awkward abandoned date-of-a-colleague hanging out near the bar, self-consciously fiddling with the half-eaten garnish in their empty drink. The flipside is also awkward because the staff party is a bonding exercise and you ain’t doing no work-related bonding by canoodling in the corner with your S/O and making everyone else feel weird. Save that for family Christmas, you animal.