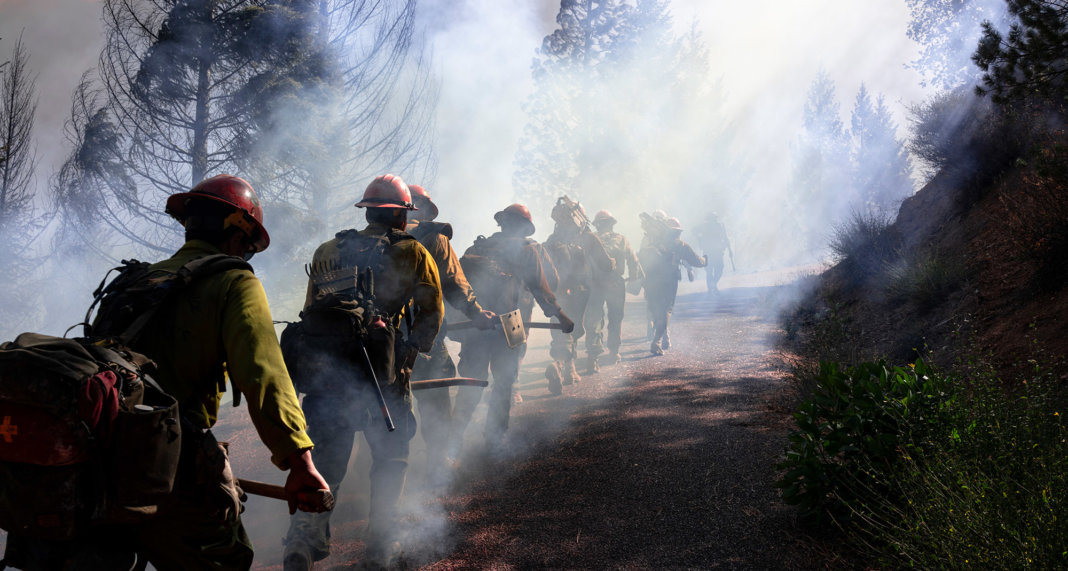 Words and photos by Robert LeBlanc

Something is humbling about the sound of a wildfire heading directly towards you.

Imagine the sound of a massive wave crashing on the rocks, combined with the rumbling of a powerful lighting storm. You can’t see it, but you can hear it coming; the air becomes engulfed with smoke, the light starts to slowly fade, and the roar becomes louder and louder. At a certain point, you have to face the fact that this might be it—there’s always the possibility that this massive body of orange rage will do whatever it damn well pleases.

I’ve been in my share of sketchy situations because of photography. Most of the time I don’t think too much about it; it’s something that I’m attracted to and if things get a little too dodgy, I can usually talk myself out of the situation or just pull a Houdini and get the fuck out. 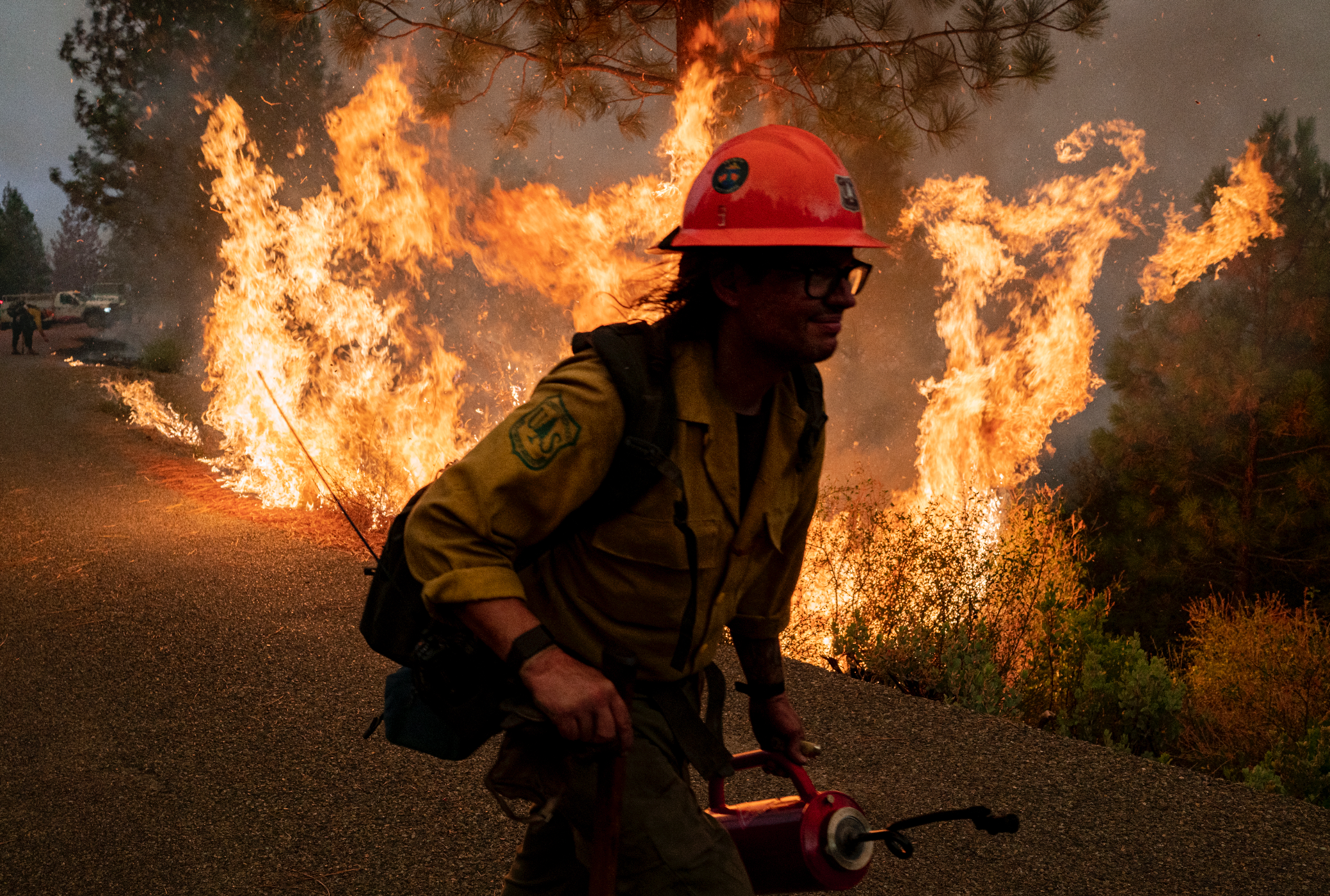 But when you are in the midst of a wildfire, both of those options are thrown out the window. I was sent out to embed myself with the Mendocino hotshots on the largest wildfire in California history. The August complex has burned over 1,029,110 acres across the Shasta-Trinity, Mendocino, and Six Rivers National Forest.

For all of you who don’t understand how large 1 million+ acres is, imagine 1,358,425 football fields or the state of Rhode Island. It has a post-apocalyptic feeling to it. Scorched earth as far as the eye can see, smoky fog that never goes away, ash constantly raining down, and when you are in the hot spots, the pillars of smoke block out the sun to create an orange sky as if an atomic bomb just exploded. It’s similar to the upside-down world in Stranger Things—everything seems like the normal world but nothing is really right.

Luckily for me, I was assigned to tag along with a crazy son of a bitch by the name of Mike McMillan who spent 17-years as an Alaskan Smokejumper, and we laughed as we ran straight into the pit of hell.  I completely put my life in Mike’s hands and I couldn’t have had a better person to do so.

Mike also suffers from the same love and obsession with photography as I do and he documented his whole 17 years of smoke jumping, so we had this common bond and understanding that the closer we got, the better the images would turn out. We hiked for days together with the hotshots, got rained on by fire retardant from a massive DC-10 aircraft, and even drove straight through the fire when a sudden windstorm pushed the Northern zone over six miles in one hour.

But there was one moment that really opened my eyes to how amazing Mike was. The second to the last day of my assignment, the fire got out of control. 40mph winds blew ambers over a mile and sparked spot fires all over our area. We had one that even started 15 feet from us. The fire moved over two roads that were essential for the entire firefighter crews.

Essentially we were trapped in a corner and had to find an empty river bed to park our vehicles and ride the night out. In the morning, we travelled back down the scorched piece of road to check on the status of the road and the community that lived alongside it. The road was still impassable and even looked more engulfed by the fire than the night before.

A man was standing on the side of the road across from a random dirt driveway that went about a 1/2 mile into the forest. The man said he and his dad were attempting to fight the fire and save the house from being burnt. Mike wanted to go in there and talk both of them from staying and to evacuate immediately. We ran down the road towards the house; even though this was 8 AM, it was complete darkness, the sun was completely blocked out and the only light was from the flames from random spot fires and the massive orange glow behind the tree line. 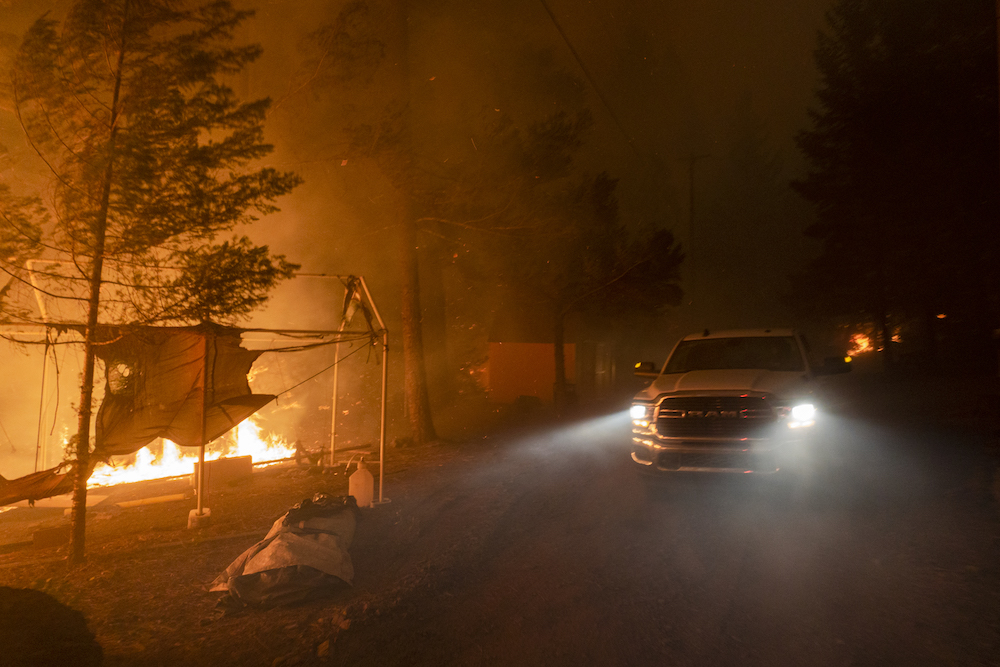 You could hear the rumbling of the fire coming towards us and the orange glow getting brighter by the minute. Mike calmly explained that there was no way they were able to protect their house and our main concern was to get them out alive. ‘Houses are replaceable, but you two are not,’ he explained in a soft, comforting voice. The father and son decided that Mike was right—the fire was about the take over this whole chunk of the land. We all began to run back down the road towards the main road when suddenly, flames engulfed the area. Two more firefighters had their trucks parked halfway down the dirt road and screamed ‘GET IN THE BACK!’ We jumped in the back of the trucks and I immediately decided to start taking photos because I didn’t know what the fuck else to do. As everyone powered through the mayhem, we made it out to the main road along with the father and son.

This moment pretty much summed up what these brave men and women do when fighting fires. Mike risked his life to save these two, even when they should have left days ago when the mandatory evacuation was enforced. Every firefighter has a husband, a wife, children, or loved ones at home, but they continue to make that sacrifice to save lives and homes in the process.