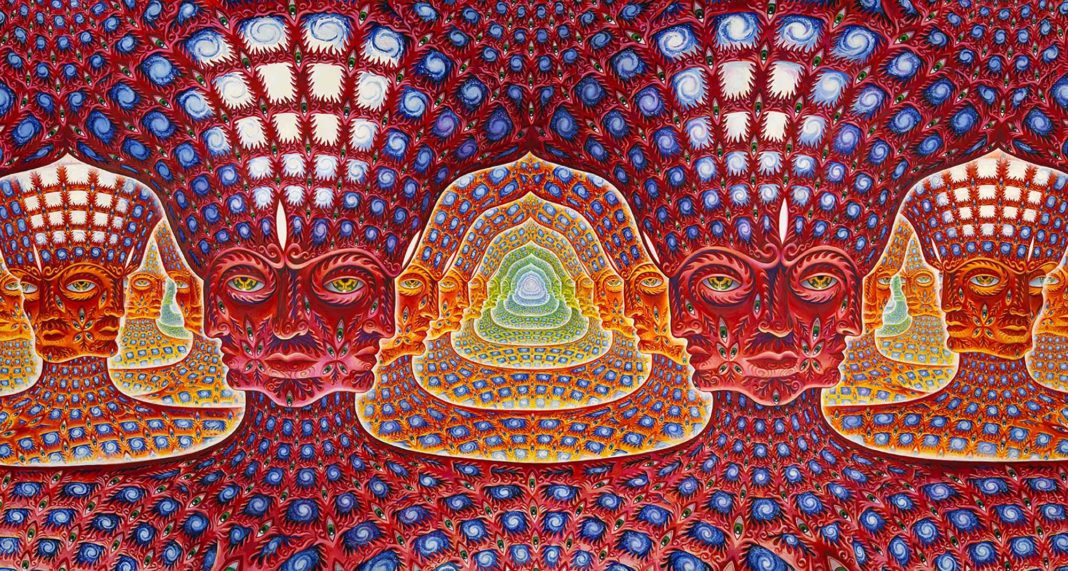 Do psychedelics let us visit other dimensions, or is it all merely a figment of our imagination?

Having worked in the cannabis industry for several years, it wasn’t uncommon for me to brush shoulders with people working in psychedelics. And while I considered cannabis to be underutilised from a medicinal perspective, the plant didn’t fascinate me nearly as much as psychedelics did and still do. As an adolescent, I would regularly listen to the late Terence McKenna, the nasal-voiced lecturer and psychonaut who would speak at length about his experiences with various psychedelic compounds. To me, McKenna’s most fascinating talks are those he gave about the ‘self-transforming elf machines.’

The machine elves, according to Terence, are entities that one encounters when they consume the requisite amount of Dimethyltryptamine—or, more commonly, DMT.
Here is Terence’s description of the beings:

‘You pass through a membrane of some sort, and you’re in a place. You’re pushed through, and you see the tykes, as I call them. The self-transforming machine elves that are singing in a hyperdimensional language. They surround you and say, “Welcome, we’re so glad to see you.”’

Using language, Terence says, these elves transform themselves and the objects surrounding them, in a fluorescent playpen of hills and flashing lights. Upon hearing this,  it’s easy to dismiss this description as mere drug-fuelled delusions, and they very well could be. However, what is perhaps most compelling about Terence’s description of these elves is that he’s not the only person to have encountered them.

Between 1990-1995, the first-ever U.S. study into psychedelics was undertaken at the University of New Mexico by Dr Rick Strassman (interview with Strassman later in the week), an associate professor in psychiatry. In these studies, Strassman administered DMT to 60 volunteers in a clinical setting and recorded his findings in his magnum opus, DMT: The Spirit Molecule. In the chapters entitled ‘Contact Through the Veil’ parts one and two, Strassman details the recurrent encounters that the volunteers experienced upon consuming DMT. Speaking on the bizarre reports of extra-terrestrial encounters by his volunteers, Strassman said:

‘I was familiar with Terence McKenna’s tales of the “self-transforming machine elves” he encountered after smoking high doses of the drug… I admittedly chalked up these stories to some kind of West Coast eccentricity. Therefore, I was neither intellectually nor emotionally prepared for the frequency with which contact with these beings occurred in our studies, nor the often utterly bizarre nature of these experiences.’

His book then goes on to describe various entities met by his volunteers while in the DMT realm, including elves, insectoids, reptilian humanoids, and clowns to name just a few. Some of the volunteers were welcomed by these entities with open arms and a loving embrace, others were plunged into a dystopic world, in which experiments were performed upon them. What is most interesting to me about these reports is that many of the volunteers described similar beings, without having spoken to each other about their experiences.

So, do humans tend to conjure up similar images when administered DMT? Or are we actually visiting a place where these beings exist? A study published last year in The Journal of Psychopharmacology surveyed 2,561 adults about their encounters with entities on DMT and 81 per cent of respondents described their encounters as being ‘more real than reality.’ Just 9 per cent of respondents to the study believe that the beings existed ‘completely within myself.’

During my time working with the cannabis industry, I was fortunate enough to interview Dennis McKenna—brother of Terence—an esteemed psychonaut in his own right. In our discussion, I asked Dennis whether he thought these recurrent visions or motifs of elves, mantises and other entities seen on DMT were simply archetypes that existed within the human mind, or whether he considered them to be autonomous beings that we gained access to through these psychedelic compounds. He responded:

‘That’s the $64 million dollar question right there—is it another dimension? [Terence and I] were convinced that it was a portal into another dimension. But now, I think it’s impossible to say. I think these are archetypes, but the crux of the question is, is it another place? It certainly has that feeling about it.’

Dennis is right, it is impossible to say whether these entities are real or merely figments of our imagination. But perhaps as our understanding of psychedelics grows we may be able to conclusively answer this question in the coming decades.