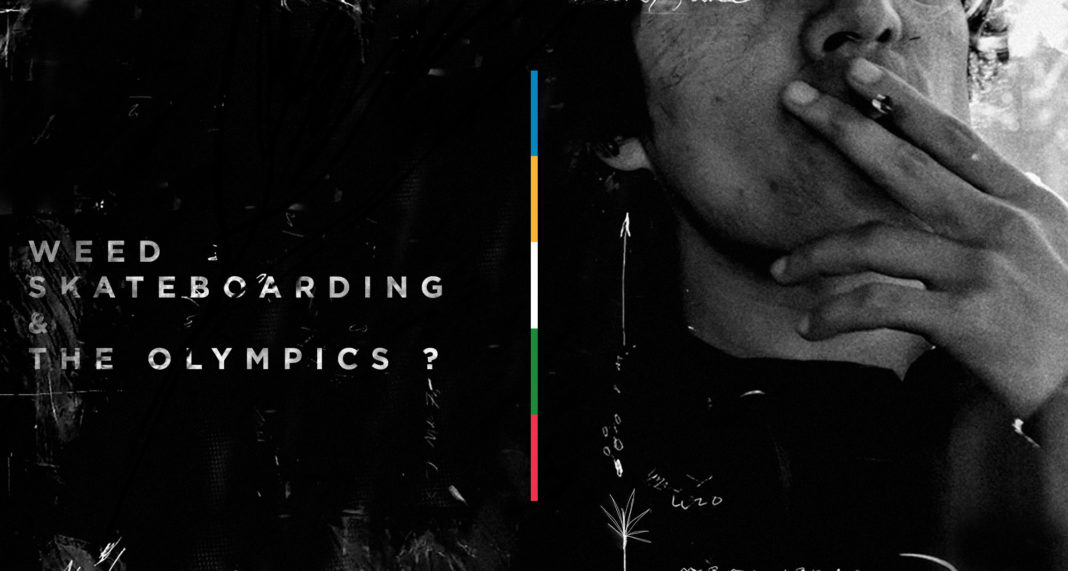 There are three things that people should’ve learned from skateboarding’s six decades of existence by now:

2. Change, progress, and evolution are not only inevitable, they drive skateboarding.

3. Don’t ever underestimate the will of skateboarders.

The following interviews comprise of a cross-section of six different perspectives on cannabis, skateboarding and the Olympics. And, as much as we wanted to appease the naysayers, we came up short.

Oscar Loreto, Adaptive Skateboarder and Athlete Representative for USA Skateboarding, the National Governing Body for Skateboarding in the United States

Tell us a little about your condition.

They say when I was in my mother’s womb, the amniotic bands wrapped around my hands, fingers and feet, preventing development. So I was born without my left foot and without nine fingers. Medically, it’s considered a congenital birth defect, but there are other theories—whether it’s just a fluke thing, or something like my mom being given some kind of bad drug during pregnancy. There’s really no concrete evidence regarding what caused it.

When did you start using a prosthetic?

Around two or three years old. There are photos of me as a young child just learning how to walk with it. Before that, I just crawled everywhere.

When did you discover skateboarding and figure out you could make it work with your prosthetic?

I always saw my cousin skating at family parties and I thought it was cool. But it was like eighth or ninth grade that I really picked one up and figured out that I could do it. Eventually seeing Jon Comer was the first time I saw somebody skating with a prosthetic.

Have you been prescribed medications for your condition or pain management?

I didn’t have the traditional phantom pains like amputees have. It wasn’t really until I started doing sports and being active that I learned about pain meds.

Do you use marijuana or CBD medicinally at this point?

The first time I rolled my ankle was first time I tried it out. It definitely helped with that, then a collarbone break and a bunch of other injuries. It’s just way more effective and soothing on the body compared to Vicodin or Oxycodone or whatever they would prescribe had I gone through a doctor or pharmacy.

I imagine you know a ton of adaptive athletes who benefit from medical marijuana?

Yeah. Especially athletes that have had amputation later in life… they definitely use marijuana as a form of pain medicine.

Have you come across anyone whose treatments have been affected or has suffered due to marijuana being illegal?

Oh yeah, for example, my friend Andrew. After his snowboard injury, he had to move back to Florida with his mom and they hadn’t passed their medicinal marijuana laws yet. He used that to combat his pain because the stuff that they were prescribing for him had negative side effects. He knew from being an amputee already, even prior to his more recent snowboard injury, that weed helped him. But I think he had to go a year or so living in Florida until the laws passed.

My friend Evan was using marijuana medically for a long time and he stopped cold turkey when he found out he had the opportunity to compete in the Paralympics.

These people are given these great opportunities and even if the marijuana helps them, they’re gonna do what they need to do. And from talking with Evan, for example, that was really his priority—honouring that opportunity and proving that he can compete in the Olympics without taking anything. And I believe that most potential para-athletes would feel and act the same way.

What are your feelings as far as marijuana in the adaptive/para community being performance enhancing versus a medical necessity? And do you think there should be a difference between the athletes and the para-athletes as far as what is allowed medicinally?

No, I think it should equal across the board. Able-bodied athletes, for lack of a better term, experience some really gnarly and debilitating injuries and benefit from medicinal marijuana too.

As to whether or not it is performance enhancing, I’m kind of on the fence about that. I advocate for weed, obviously, but if it’s not possible to get an exemption or if they don’t change the rules regarding marijuana and competition then, like I mentioned earlier, I’m the type of person that will abide by the rules because the opportunity and the bigger picture are worth it. But at the same time, I feel they should look at it on a case-by-case basis, or if they considered a compromise like allowing a smaller amount in your system. If they can meet halfway with the athletes, that’d be pretty cool.

Tell me about Miller Healer and why you started it.

A long-time family friend who is a CBD guru saw me falling a lot in one of my skate videos and asked me what I did for pain management. I have always been natural—no taking pills, not even Advil. Us skaters, we just deal with the pain a lot of the time. So she let me try some CBD stuff and I definitely felt a difference, just not as much as I thought I would because it was a lower dose. So, together we came up with an extra strength version for athletes that’s super effective —tested by athletes but designed for everyone. And that’s how we came up with the idea for Miller Healer. We have topical products, like a push up stick and pretty much the best CBD patch out. We have edible gummies and a tincture as well.

Are you into smoking?

I definitely smoked here and there but I only liked the medicinal benefits. I’m not against it, but I prefer CBD because it’s non-psychoactive and I just feel right after using it, and seeing the amount of people CBD helps is why I started this.

How about the risks for athletes using CBD during competition? There’s the potential for THC to be present and show up on a drug test, right?

Yeah, they call it the Green Rush right now. There are so many new companies coming up and sometimes you just don’t know what’s in the products. There are a lot of companies that don’t get lab tests, or that say they have certain things in their products and don’t. But there are a lot of reputable companies out there and we are one of them. We spent the last four and a half months doing research and development, making sure everything’s done correctly and legit.

I’m sure the Olympics have a higher calibre of drug test too, but on a standard test CBD might never show up as marijuana. But as far as the Olympic testing is concerned, I would recommend the topicals because that’s the safest. If I were in the Olympics I would never want to risk that. We make these eight-hour time-release patches and a salve stick that are super good.

Do you consider THC to be performance enhancing in a competition?

I don’t think it’s performance enhancing. If there is a medical condition that would prevent an athlete from competing at their best, then I believe it should be allowed. I wouldn’t recommend consuming cannabis while actually competing anyway, due to the psychoactive components. That’s why I think CBD would be the best choice for competition since it has all the benefits, while being non-psychoactive.

Especially the Olympics, man! You gotta represent for the country and you can’t have little bruise or pain or something weird take you out, you know? And it’s great for anxiety. You just feel better, you get back to your homeostasis form and feel top notch.

It also seems like this Green Rush is providing a new option for skateboarders as their careers wind down. Since weed is something they have been passionate about and enjoyed, like skateboarding, now it’s an industry and they can start a brand in or work in it. We’ve seen so many guys not have anything for themselves after skateboarding stops paying the bills.

Totally. I had opportunities to start a skateboard company, a hat company, all these other things, but I always wanted to do something that helped people. Once this came about, all the stars aligned. We are sponsors for Epilepsy Day at Disneyland and things like that. The different range of people that CBD helps is amazing. Like you said, it’s my new passion just like skating is always my passion, but it’s dope that I’m doing something I don’t mind staying up all night and working on for my business, because it’s passion.

Also, realistically, skaters know day-to-day pain probably more than anyone. I know what works and what only kind of works. As a skateboarder or a professional athlete in general, you have understand skateboarding and that kind of pain to test the products and really know if they are going to work or not.

You want the people creating the products to have a high level of experience and authenticity.

Exactly. With our salve stick, patches and topicals, I’ve done so much research and development with all my pro friends who’ve hurt themselves. Yesterday I was with Kyle Walker and he was using the patches on his heel bruise. There’s really been nothing for heel bruises in the world of skating thus far, and that’s just one thing we deal with. These patches are actually working and helping people heal quicker. I’ve had skate doctors rub my heels out for three weeks straight trying to get rid of my heel bruises and the result was just more pain. Now I put these patches on or use the topicals and my body has natural receptors to heal itself.