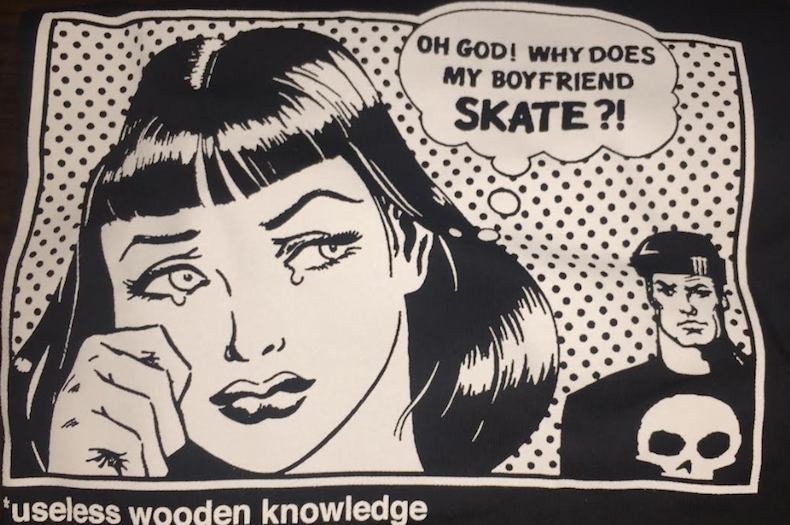 You’re not really a nerd until you show up half an hour early to an empty room on skate trivia night.

You and your buddy down a couple of beers and 45 minutes later, things are beginning to pick up a little steam as the hosts arrive and start setting up shop. Give it another 30 and there’s a healthy crowd. “You always have to put the time an hour early on the flyer,” co-host Andreas Trolf explains, “otherwise you’re not gonna get anything going with a group of skateboarders.” I should know this, but like any good nerd, I arrived dutifully early.

If there’s any category I can say I know the most useless trivia about, it would be skateboarding. Even though I’ve never worked in the industry and have never been sponsored, I’ve spent more hours watching skate videos than any fully developed adult should scientifically be allowed. And I brought my good friend Graham who’s a bigger nerd than I am (he wears glasses full-time whereas I only need them to see long distance), along for support. Should’ve been no problem. But skateboarders have an encyclopaedic knowledge of the scene’s past and show it with pride. Being de-nerdified is a humbling experience.

“Lots of people leave their established sponsors to strike out on their own in the overpopulated wasteland of independent board brands. What did Steve Saiz and Mike McGill call their attempt?”*

“Which two titans of skateboarding collided mid-air over a car in 411 Euro 1997 video right before Mike V went full on WWF on the same car, focusing the windshield with his elbow?”**

“Name literally anyone who currently rides for Theeve Trucks.”***

These are some of the easier questions asked at Useless Wooden Knowledge, a skate trivia night. If Graham and I hadn’t joined forces with a veteran team, Mitch Swongo (a spoonerism on switch mongo), we would have been done for.

This was one of the better showings, according to co-host Justin Strubing. “But the one we did in Long Beach after Agenda [trade show] was a good one. You’ve got Rob Welsh over here on one team, all the dudes from the Muckmouth Instagram over there, Willy Santos was there. Everyone was already down there.”

Along with Andreas and Justin, the night is co-hosted by Daniel Shimizu and Clint Peterson, so you know the nerdery runs deep. Many of the questions tended to lean towards the late ‘80s/early ‘90s era, which was hard for the attendees who may still have been learning how to walk at the time. The clipboards we used were made out of old skate decks. There was an all 411 Video Magazine round. A bunch of worksheets were featured, including one with just images of haircuts which asked us to identify the skaters presumably attached. A personal favorite, the skate art, AKA ‘skart’, worksheet asked us to match specific artworks to the artist/skater.

Latching onto an established team proved to be a successful strategy. We came in second place and even got the chance to contribute a few answers toward our final score—notably, Graham came through with “Drehobl” as an answer in the ‘skateboarder starter pack’ round. The question provided three recognizable personal characteristics and asked the audience to “name that skateboarder” (Drehobl’s were insulin, Dockers, and cigarettes).

We ended up losing to a team full of industry veterans including Aaron Meza, Greg Hunt, Reda, and Ben Colen, but thems the breaks. “That’s just the way it is sometimes,” Andreas exclaimed on the mic in response to a complaint that there was a question about Jeremy Wray, who was in attendance and playing, “you’ll get it on the next one.” Later, he recounted a story from a previous trivia night where Rob G was sitting at the bar, totally stumped with the question, “What team did Rob G, Chad Fernandez, and Steve Olson all ride for?” I don’t remember the answer myself.

Most frequently done at Black Bar in Hollywood, Useless Wooden Knowledge just ended its 7th edition in just under a year. “We all would go to regular trivia night—which we were bad at—and realized we could just be bad at skate trivia instead,” Andreas told me after the scores had been tallied while he and some of my childhood heroes geeked out about mini ramps on the bar’s back patio.

With hopes to travel to San Diego, Austin, and New York as well as a north-east version already in existence in Toronto (with all the questions filtered through Shimizu for authenticity), Useless Wooden Knowledge is sticking around. Follow them on Facebook or Instagram @useless_wooden_knowledge to find out about the next dates and start brainstorming team names. Sorry, “Millennium Todd Falcon” is taken. Graham thought of it.