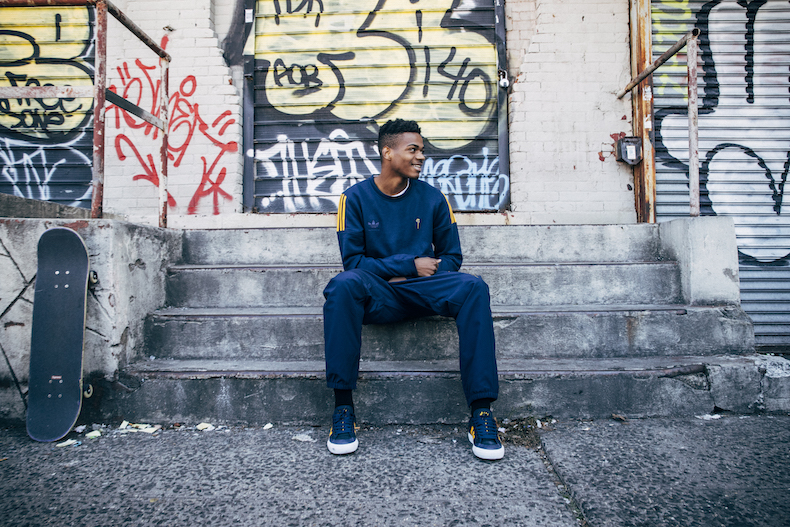 Soon after borrowing a copy of EA Skate in 2009, Tyshawn Jones graduated to an actual skateboard and quickly put New York’s Tri-State area on notice, by simply being himself.

The 18-year-old who split his childhood between New Jersey and the Bronx credits his rapid success to skating for skating’s sake, rather than the pursuit of sponsorship. His ability, bolstered by a natural confidence and ease, caught the attention of Supreme, which lead him to appear in several clips for the brand and eventually William Strobeck’s full-length video, cherry. Between his shirt tearing post-trick celebration and absolute destruction of NYC’s Courthouse, Jones had not only arrived, but did it with an undeniable Uptown panache.

Following cherry, he co-founded his own hardwear/apparel company with teammate Na-Kel Smith, as they both culled footage for adidas’ first true full-length team video, Away Days. Appearing roughly a foot taller, Jones delivered on all expectations for his debut solo part, including a blinding white-on-white outfitted NBD down Philadelphia’s infamous Love Park gap.

Smith and Jones’ company recently collaborated with adidas for a limited apparel and footwear capsule, launched in tandem with a short web clip, featuring NYC’s infamous dirt-bike crew, the Go Hard Boyz. From the Matchcourt silhouette emblazoned with the Hardies “fist,” to the crewneck, hat, and track pants in bold blue and yellow, the collection is another symbol of the duo’s punching their way into skating’s collective conscious.

Launching officially on February 3 in select accounts, I caught up with Jones to discuss impact, influence, and ambition. 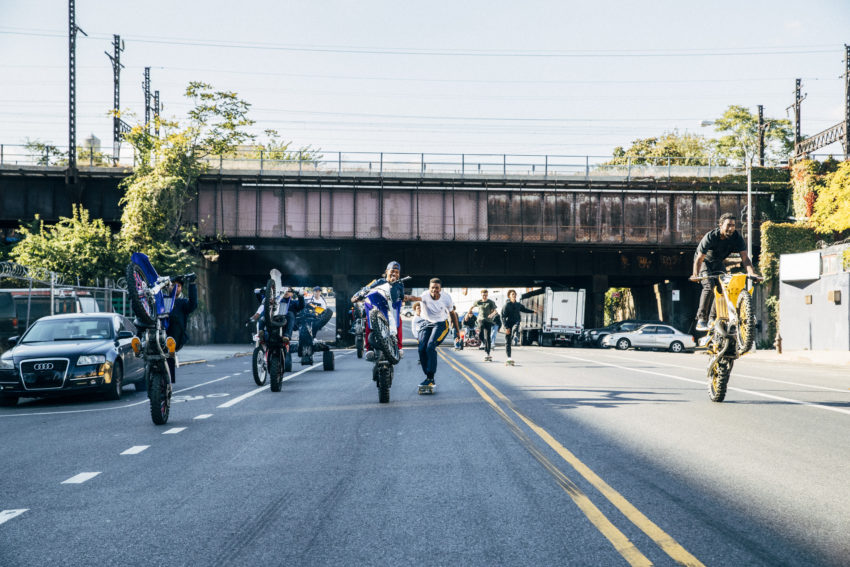 Do you remember the first time you bet William Strobeck?

I do actually, (laughs). It was at Supreme, because we had to go film for this short clip called buddy. I don’t know how he got my number, but he texted saying, “Yo, we gotta film this thing.” We skated for two days and it got a lot of hits when it came out. Supreme liked the feedback so much that it lead to cherry.

Does he turn you onto stuff from his era?

Yeah, it’s tight. I like the videos, they’re cool to watch and see how skating has changed so much.

It’s a lot easier to get exposure now, which in turn, makes it harder to stand out. How important has it been to have mentors like Bill and Jason Dill around you?

Definitely, because they’re legends in the game, so they school me to all the right and wrong things to do—it’s better to have that help and have people to show you the way.

What’s the best advice Dill’s ever given you?

The only advice he ever gave me was, “Don’t trust white people over 30.” (laughs)

Not only did cherry showcase you to a massive audience, but you absolutely destroyed the Courthouse. Did you have any pressure to follow that up with your first real solo part?

I don’t know, because after cherry came out, I still wasn’t on adidas yet. My motivation for Away Days was to put out something that people would like. Hopefully they did like it. I wanted my first part to be one of the good ones. I had first impressions in the other videos, but those were montages—you know how Bill does his thing. Your own video part is you, you know what I mean? You’re showing everyone what you can do on your own, not being followed up by everyone else’s clips (in a montage). 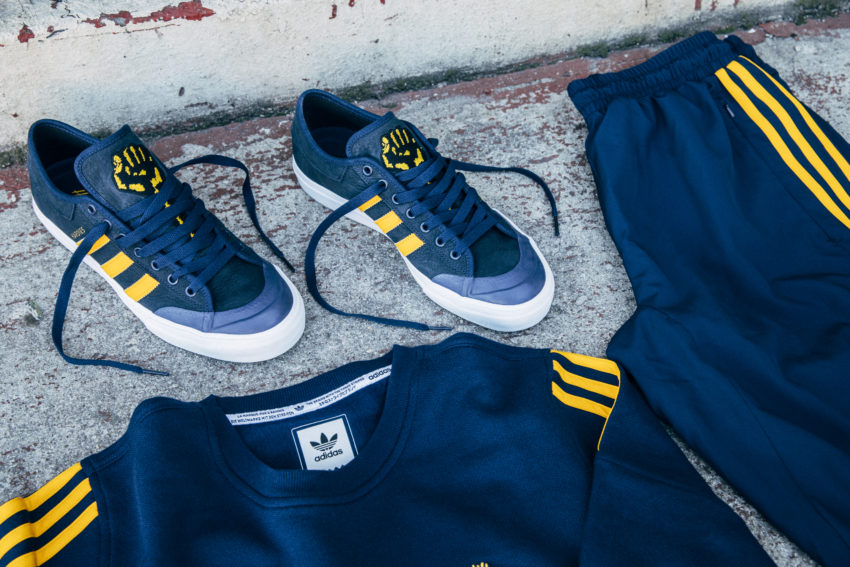 On the flip of that, you have a whole clique you’ve come up with and turned into Hardies with Na-Kel. How important has that been?

Yes, I could do it on my own. Skateboarding’s always fun, but it can become a job at times, but when I’m on a trip with Nak we just laugh—it’s not super serious. Nak is one of my very best friends—he’s like my brother. It’s not like… you know when you come to new job, you gotta meet new people and all that. We came into it together, so it makes it more comfortable—it’s way easier.

Is Hardies more of an extension of that friendship than a company, per se?

Yeah, that’s how it all came about. It’s just a game we played—it’s like, “Two for flinching,” but you say, “Hardies.” We were trying to think of a name and we just said we were gonna call it that. Then we started an Instagram for it and people liked it, so from there we decided to make it a real thing. 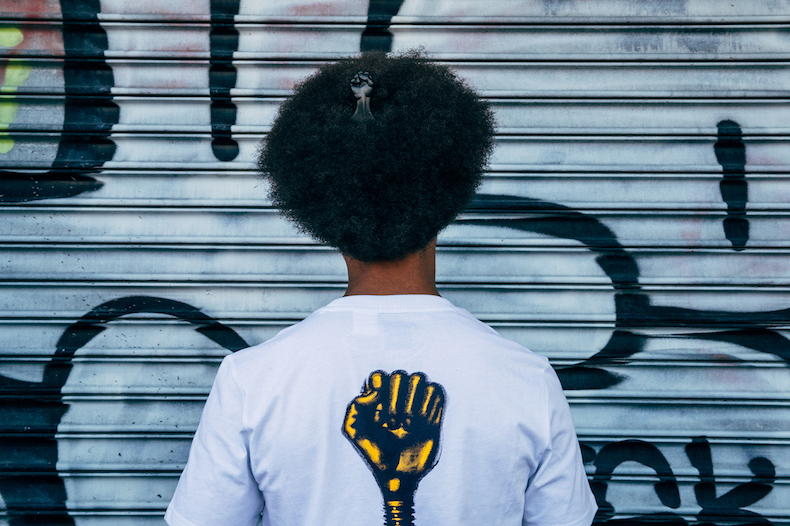 Who came up with the fist logo for the brand?

My friend actually came up with it. The fist is from the game—you know, just punching each other—and the screw is for the hardware. That’s how it came together. Everybody is always thinking they’re gonna get a pack of hardware, with a big fist sticking out and a screw, but it’s not like that. (laughs)

What inspired the gold and blue colorway for the adidas x Hardies collab?

At first it was black and yellow, then it changed to black and neon. The one we went was just something I came up with in my head—there wasn’t really a reason. I really liked it when we got the samples. For the shoe, I really wanted to do the full logo on the tongue, because I had never really seen anyone do that before. You know, normally they just write a word or put a name on the top of the tongue, so I wanted to really use the whole thing.

The street bikes really stand out in the clip. Who pushed for that?

That was my idea. I really like that culture and saw some videos on Instagram and thought it was really dope. I wanted a bike so bad, but I got too much to lose to get one. If I bust my ass or something, my career is over. So, because I can’t do that, I want to live through them. I thought it would be sick to bring that in with skaters—it’s two different worlds, but that’s the street culture. It was cool to let them shine. Even before the collab got approved, I had been telling my friends forever that I was gonna do something with dirt bikers in New York and it’s gonna be crazy. Now it’s here. That was one of the craziest days of my life (filming). The bikers are just so insane and so good. 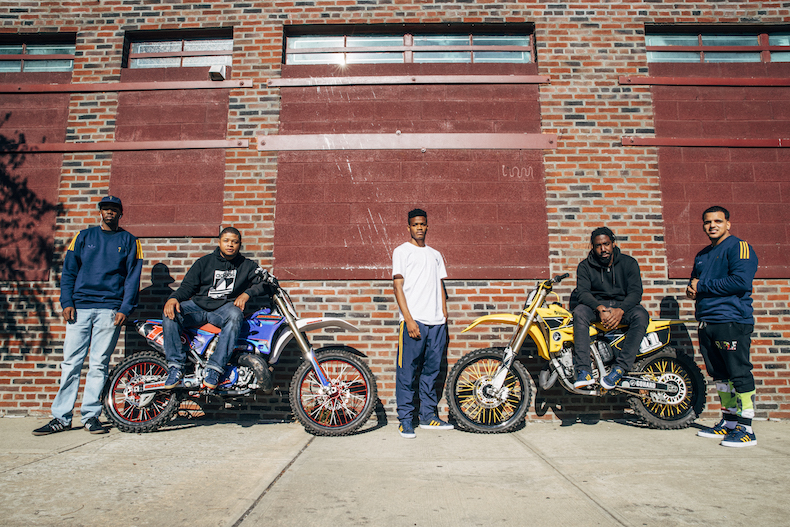 It’s also such a specific and unique thing to Uptown New York culture in general.

What do you look for when you’re picking out or designing a shoe?

I feel like some people try to design shoes for other people. I just design for myself. I just put my colorway on Instagram the other day and I got a bunch of comments. Kids were saying, “Oh my god, that’s super cool!” It’s cool to see it. When I go in there, I always pick out what I think will look good on me and hopefully it will look good on other people. I never got any really bad responses. 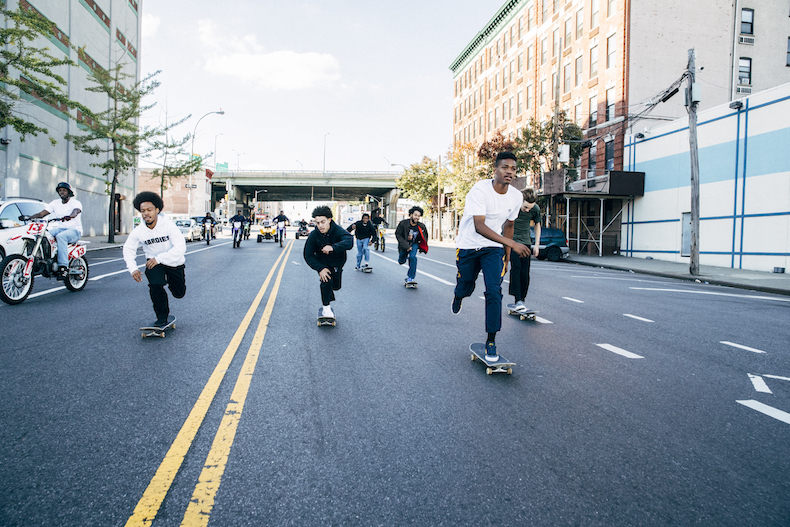 What’s a trick you’ll never do?

Like I wouldn’t do cause it’s wack? A benihana. (laughs)

Favorite clip you ever got?

When I almost fell off the monument. I like that one because I saved my life. I could have broke my neck.

What did you buy with your first check.
Nothing. Them shits is in the bank.