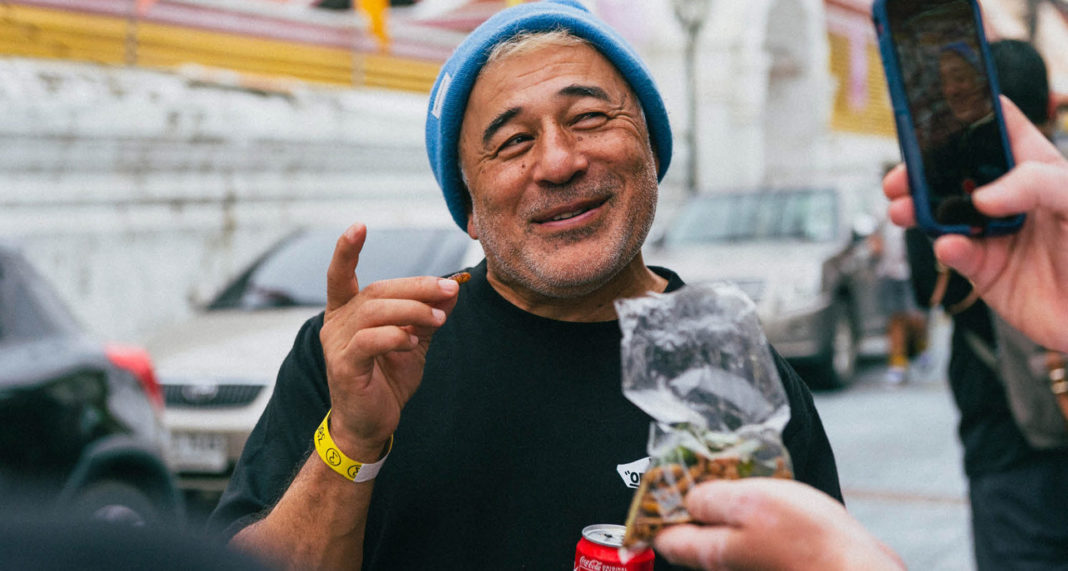 Life has taken me to many strange and wonderful places, but none more so than sitting aboard a tuk-tuk in Bangkok with Steve Caballero.

Cab requires no introduction, but of course, he’s one of the most endearing and respected skateboarders of all time. He invented the frontside boardslide, for instance (as well as the Caballerial and the half cab, duh). On the occasion of the 30th anniversary of his namesake pro model shoe, the Half Cab, Vans flew a bunch of us to Thailand for a few days to skate and celebrate. So there I was, in a tuk-tuk, with Steve Caballero.

Steve, what are we doing?
We’re tuk-tukking around Thailand.

You have Thai tea, I have Thai coffee.
And we ate cocoon larvae. That was very… interesting. But when you’re in Rome you gotta act like the Romans.

How does it feel having everyone pointing a camera at you?
I’m used to it. It’s been part of my life since I was 15 years old; just different scenes, countries and situations. It’s just a part of what it is to be someone in the limelight of the sport.

You’ve been a part of our lives for a long time, too. It’s a pretty heavy thing.
I don’t know anything different, you know? I guess I would say I don’t know what it’s like not to have a camera in my face.

I wonder what would happen if one day it just stopped.
I know that will happen eventually. 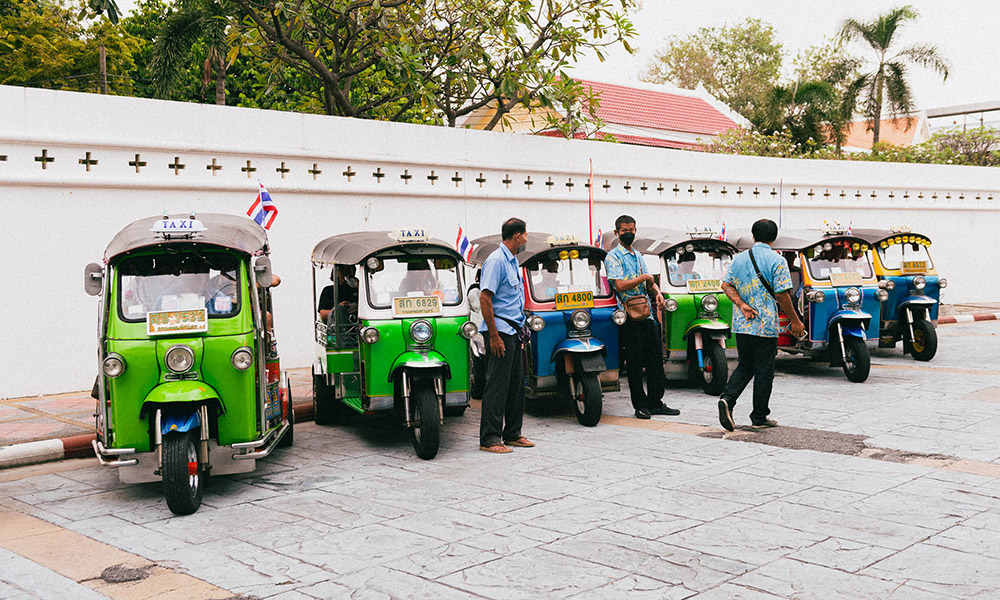 I don’t know if it will, as long as you keep skating.
I always try to stay as current as I can, you know? I love the sport, I love the opportunity I’ve been given to keep skateboarding and living this dream. I don’t want it to end, so I make sure I do my part to keep it rolling.

That’s rad. And I think it speaks to how you’ve maintained your career over the years. You were doing pressure flips at Embarcadero in the early ‘90s.
I was always trying to fit in. If anything, I would be considered a ‘trendy’ skateboarder because I would always try to go along with the trends. I think if you avoid the trends, sometimes you get left behind. I always wanted to be current, to participate in this industry. I feel like that’s let me have longevity in the sport, and also my loyalty to the companies that have supported me over the years helped me pave the way. 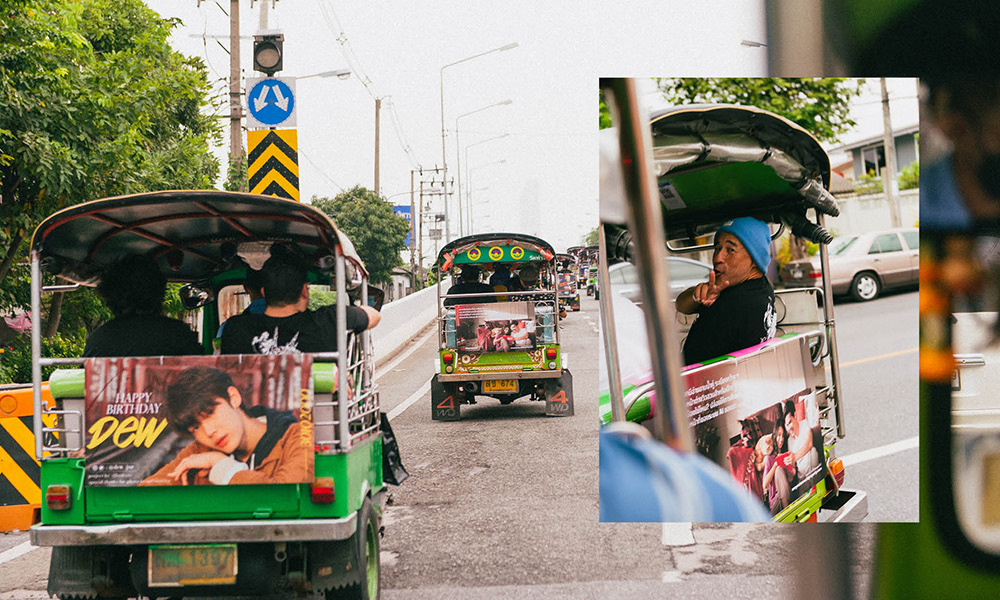 Absolutely. It’s cool you say that because some people deny the role trends play in skateboarding, and it’s actually a really important part of it.
You’re either inventing the trends or you’re following them, and I think you should do both. It’s a balance. As long as you’re following or inventing a trend, you’re along for the ride.

It’s a big part of creativity in general, right – feeling connected to something?
Skateboarding adheres to a lot of creativity. It’s amazing what the human mind can create. It’s taken skateboarding to new levels. Here’s a perfect example: when Tony Hawk’s Pro Skater game came out, there were a lot of people who were against it. They were like, ‘That’s not skateboarding. You’re not skateboarding, you’re just playing a game based on skateboarding.’ That was so short-sighted because it became a mainstay and actually contributed to the progression of the sport. When I see the tricks kids do today, I’m like, oh my goodness, I was doing that combo in 1999 with my thumbs. Now these kids are doing it in real life. Kids saw that, they dreamt it and said, maybe I could do that.

I’ve never thought of it like that. Like Shane O’Neill, he literally skates like that.
Exactly. Back in ‘99 or 2000, people wouldn’t be able to imagine doing a combo like that in real life. I think it’s because of the video game era.

With music and art and the other parts of your life, do you apply that approach of staying current and adapting?
Staying creative, whether you’re on or off your board, it helps build communities around what I do. Music and art have always been a part of skateboarding, so why not participate in those avenues? Why not use my ability to apply myself like I have with skateboarding to music and art? All these lifestyles mesh together and it always leads back to skateboarding. It’s touched so many people’s lives in all countries and eras. As a person who wants to experience life to its fullest, why not indulge in those things and see where I can take it? 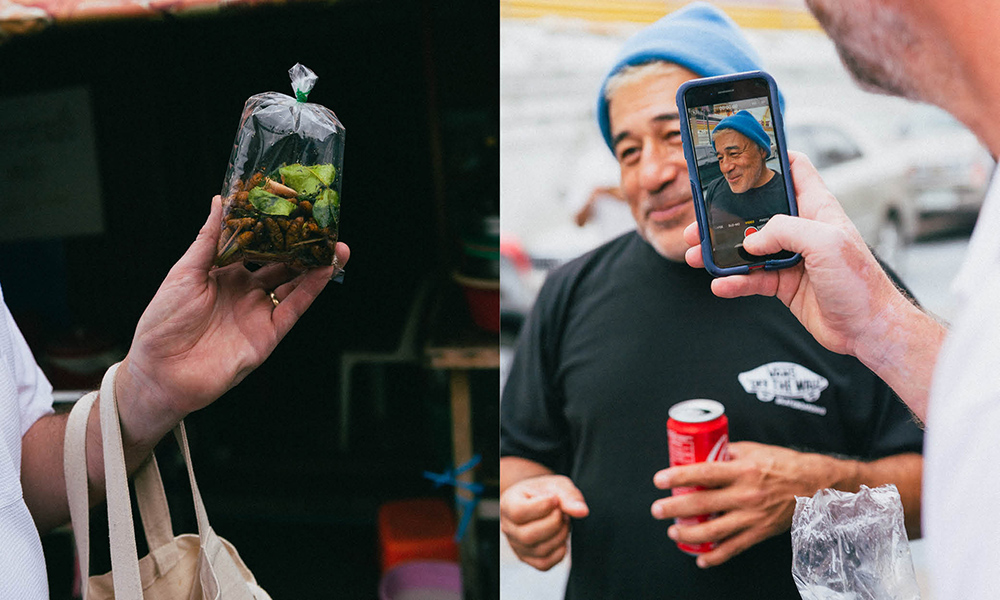 I discovered a lot of culture through skateboarding videos. Connecting the energy of the music with the act of skating, like The Incredible Rubber Boys.
What’s awesome is that in my new band Urethane, we actually cover that song. And when we play it I say, ‘We’re going to play a song from the ‘80s, it’s from this film called Public Domain. This is for The Rubber Boys and it’s a song by McRad.’ People get hyped.

I bet they do! When I saw that, it blew my mind. I hadn’t known skating could look like that. Ray Barbee was like a magician or something.
He has a nice flow. It looks very fluid and natural, just cruising down the street. I like anyone who makes skateboarding look natural and fun. It’s like poetry in motion.

So this year the world has opened up a little bit more, and it’s coincided with the 30th anniversary of your shoe. Have you been travelling a lot?
This trip to Asia is one of the first trips for Vans to celebrate the Half Cab shoe. But I’ve been travelling with my band, we just did a two-week tour to Germany, Austria and Belgium. So I’ve been on the road with skateboarding, art and music.

Are you particular about your setup? Is there anything you have to do to make your board feel right, or can you just ride it stock?
I change out the bushings in my Indys for Bones hardcore bushings, but that’s about it. I always have rails on my deck because I like the consistency of the slide. I have two boards: one board for vert and bowl, and one for street.

Were they both in your bag which went missing?
Just the vert board. I’m going to Japan after this trip to go skate with this little 8-year-old at one of our art shows in Kobe. The park he skates is right near the event, so I brought my vert stuff so I can skate with this amazing kid who can do 540s and 900s on a vert ramp.

How do you feel about the evolution of skateboarding to the point where whole families are dedicating their lives to making sure their children reach some Olympic goal?
To each his own. Everyone is attracted to skateboarding for different reasons. As long as you don’t try to put skateboarding in a box, it will be more enjoyable for you and everybody else. Just care about why you like skateboarding and apply yourself to that, but don’t judge or criticize people who are very serious and into competitions or a certain type of skateboarding. If they choose to do that, you should allow them to, without hoarding skateboarding to yourself and defining what it is and isn’t about.

It’s like the people who hated on the video game all over again.
I see it all the time on social media—hate, hate, hate. I think it’s a very narrow-minded view of what skateboarding really is. They’re actually making skateboarding smaller than it really is. In their mind it’s small, so they want everyone else to think of it the same way. Skateboarding is way bigger than that person. It can’t be contained like that.

Skateboarding is every person who skates.
I’ve also been open to allowing skateboarding to grow in any kind of way. I’ve never put it down when I see it on social media or the news, or commercials—more power to it. If you wanna throw money at skateboarding, go ahead, we’ll take it. You wanna leave? Go ahead, leave. We’ll still be here. That’s the thing. Whenever I’ve had the opportunity to skate with one of these amazing young kids, it’s always super fun. They love skateboarding, just like we all do. Just have a love for the sport, love what you do, and don’t care what anyone else does. 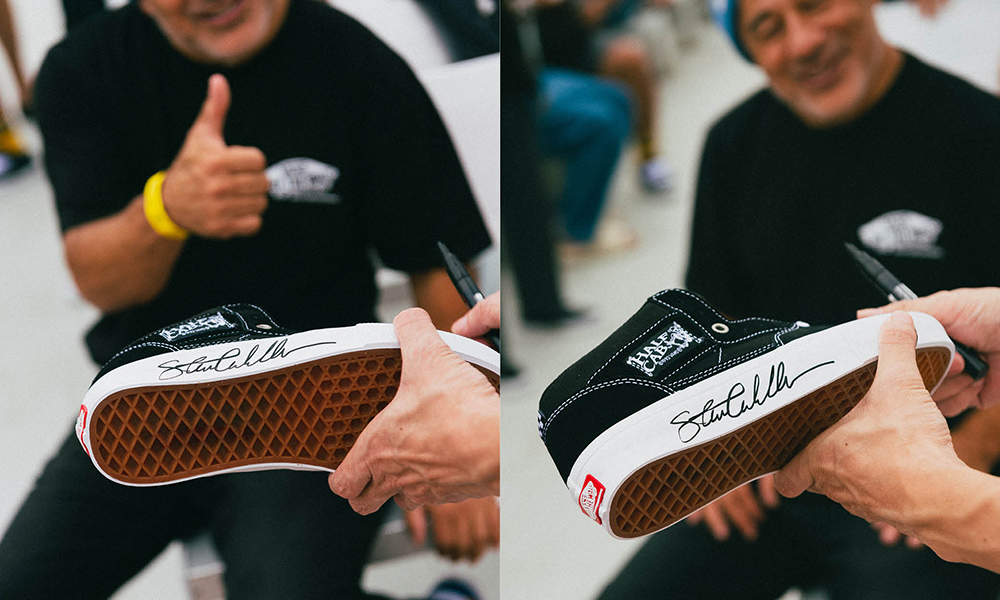 I wanted to ask you about Batman.
Batman! It was something I was really into as a kid, then in the ‘80s when I was really into being fashionable and people were looking at what I was wearing, I always wanted to look different. It was to the point where even Powell-Peralta noticed and gave me crap. I was just trying to be myself.

I loved it, and the reason I bring it up is I just caught up on the last two Batman-related films on the flight over here.
Oh, the latest one is really good. I think it’s very authentic to the real story, I really like the way they produced that movie.

And Joker as well, that was full on.
Yeah, those two movies are amazing. I grew up with the cheesy 1960s Adam West Batman in the leotards, I loved that too.

Boom! Thwap!
Yeah! But I’ve always loved the character of Batman because he’s more human than anyone else. His superpower was all his trinkets, and basically, he had a lot of money. His superpower was money, I guess. When the first movie came out in 1989 with Michael Keaton, that’s when I stopped wearing all the Batman stuff because everyone was wearing it. It wasn’t as special as it was before, so I packed away all those shirts. 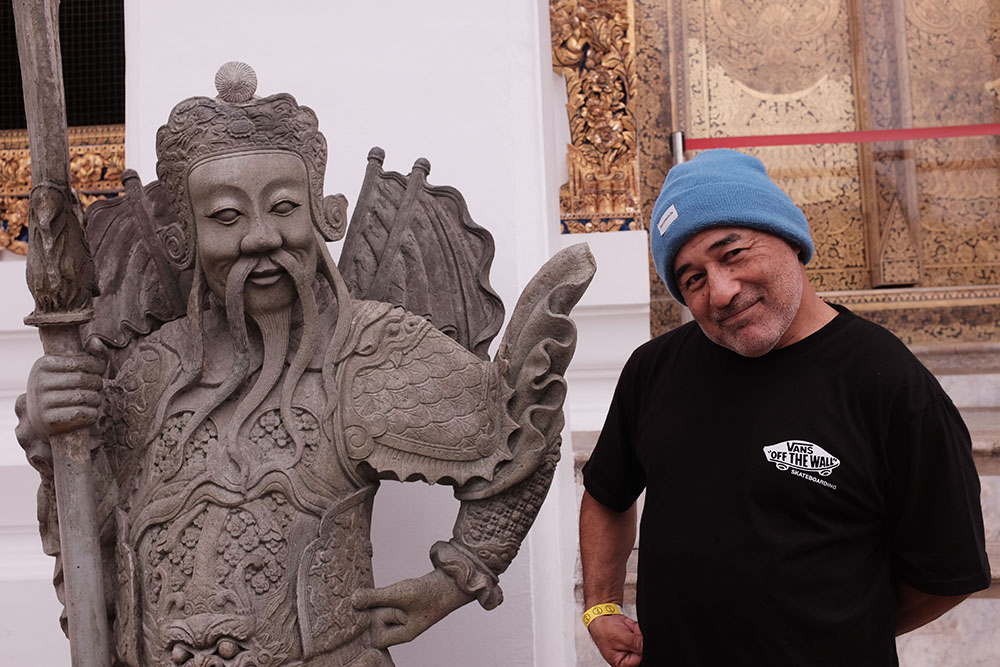 You kept them all? Start putting those things on eBay! Well, we’re about to get off this tuk-tuk. Is there anything else you’d like to say?
I just want to say thanks to all the skaters who’ve supported the Half Cab for all these years. I’m really honored and blessed the shoe has stayed in the line for this long. The skateboarders came up with the idea to cut down my original shoe, and I just relayed it to Vans, like, ‘Why don’t we make the shoe like this?’ They said yes and they could’ve said no, and we wouldn’t be sitting in Thailand 30 years later. The fact Vans listened to the skaters and listened to me says a lot. Here we are, 30 years later, sitting in a tuk-tuk. Pretty amazing.