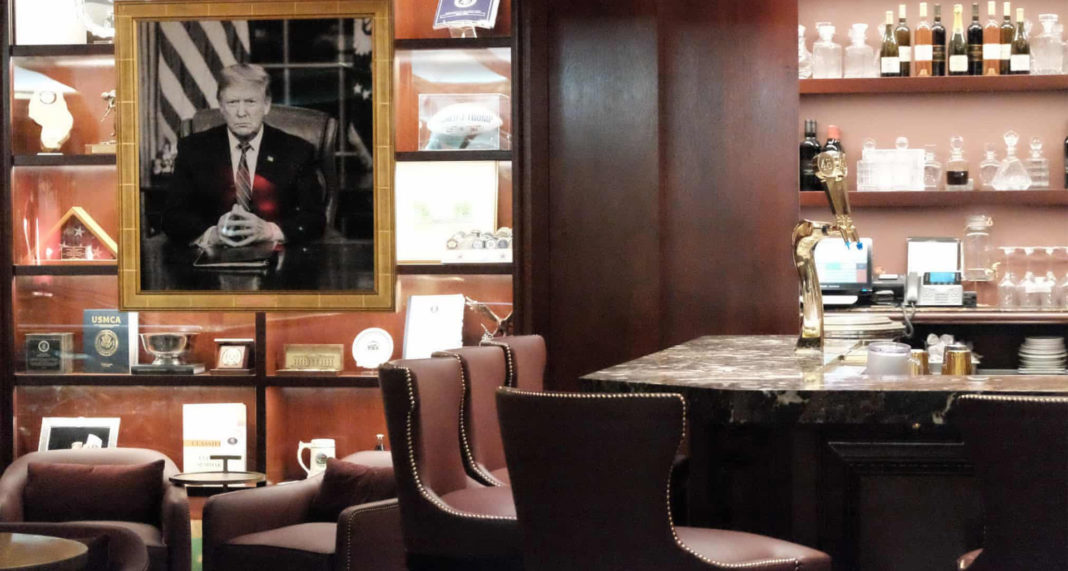 US writer Adam Gabbatt went for a drink at Trump’s new hospitality venture, and it’s the perfect understated roast.

If you’ve caught yourself recently thinking, ‘I wonder what Trump’s been up to?’ then this is for you. Aside from hanging out in Mar-a-Lago, he’s been trying his hand at the whole entrepreneur thing again (who’s gonna tell him?) with refurbished bar, 45 Wine and Whiskey, set in New York’s Trump Tower. And yes, that’s 45 in reference to his ex-presidency, but if you think that’s where it ends, think again.

In Gabbatt’s piece for the Guardian, he counts a total of 39 photos of Trump in the bar, including photos of him meeting with Kim Jong-un and Queen Elizabeth. According to Gabbatt, the bar ‘mainly serves as an ode to narcissism, or as a world record attempt to cram the most black-and-white photos of one man into quite a small space’. Ouch.

Aside from noting that during his one-hour stay at the bar, he was the only customer, we also discover that the drinks are as insane as their intended clientele: ‘The Forty Five – a whiskey with syrup and bitters, served with two small hamburgers and, bizarrely, a Diet Coke – is $45,’ writes Gabbatt. ‘The Flotus – a potent white wine and gin ensemble that could hint at Melania’s lack of activity while in the White House – is $29.’

A quick peruse of 45 Wine and Whiskey’s Instagram also reveals that patrons can also expect ice cubes emblazoned with the letter ‘T’, and Trump brand rosé.  You can’t make this stuff up. If you’d like a giggle, check out Gabbatt’s review here.