“I do well with people but I also consider humans to be a cancer.”

It’s a pretty heavy thing to say, but Todd Francis somehow says it without a trace of nihilism or bitterness. “I think there’s too many people doing too much damage and animals have to endure a lot of the impact of that,” he explains. “I’ve always been an animal nut—I like cats and reptiles and things that might bite you.” 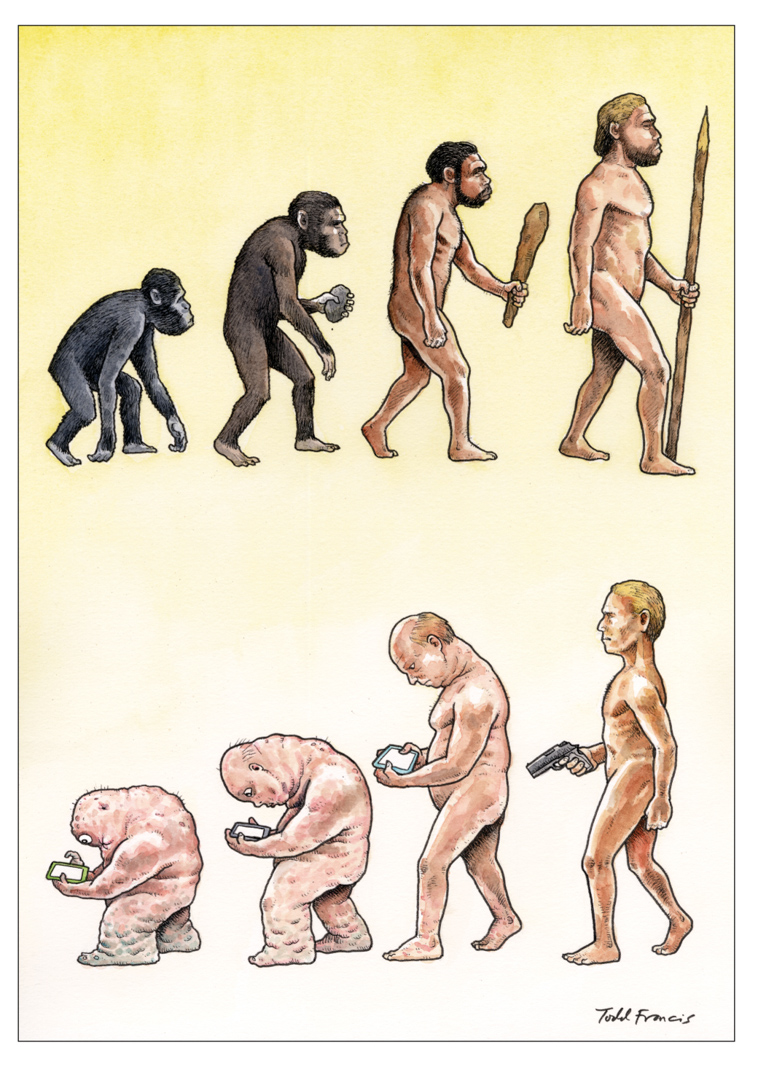 Todd’s work is by no means safe, rather it’s provocative and controversial—not in a particularly avant-garde or pretentious way, but in a way that forces you to interpret the meaning of it. His art is simple and literal. It’s generally the kind of stuff that can be easily digested and understood, like a good joke with a punch line. Between images of brutal animal attacks, jokes about human evolution and anti-Trump cartoons, it can be pretty divisive stuff. 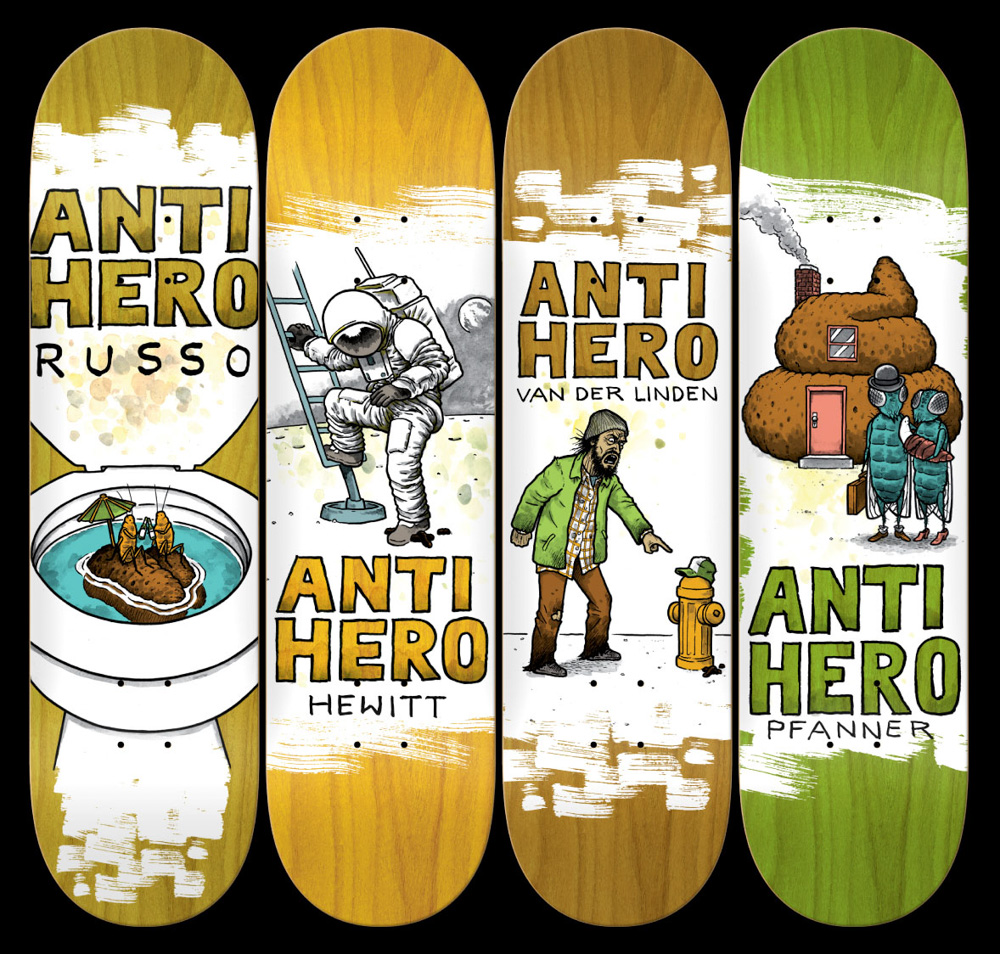 Todd clarifies that the enjoyment for him is really just having a laugh at home, and maybe posting a kiss or heart emoji in response. He describes arguing online as “a tremendous amount of energy wasted” but accepts that this is the nature of the Internet era: conflict happens more regularly than ever, but from a safe distance. “I could never think of a time where people were more argumentative and where people were less willing to actually debate and listen and read,” he says.

“Someone from across the country or across the planet can yell at me from their fake account and talk a bunch of shit and then log off. There’s no repercussion; there’s no accountability. I’m not saying that I’m always right but I’m willing to put my name on what I stand for or believe in.” 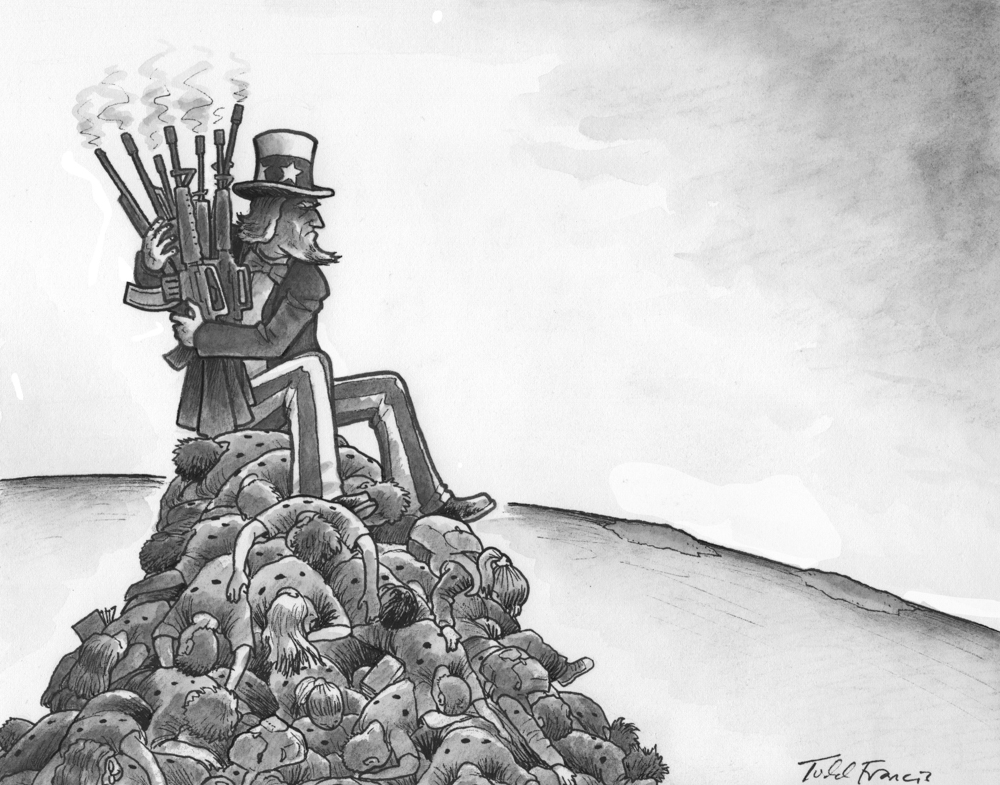 Standing up and making a statement is obviously a fundamental part of Todd’s shtick and it usually comes out in the form of sarcasm. Much of it is anti-corporate, anti-authoritarian and macabre. Whether it’s an Antihero board graphic of a dog biting off a cop’s face, a boy with no limbs or a cartoon of Uncle Sam stockpiling guns on a pile of dead children, it’s the sort of stuff that makes heads turn.

For me as a young skater, Antihero’s board graphics were formative. I tell Todd that it’s interesting to see his political cartoons for Penthouse because they’re much more refined— almost like the cartoons in The New Yorker. He explains that back when he was in college, he actually worked at a local newspaper, illustrating daily political cartoons. “There was a time, when I was 20, where that’s what I wanted to do for the rest of my life,” he says. But soon he was watching print media “wither away” and surprisingly, it turned out that skateboard graphics were a safer bet for making a living. 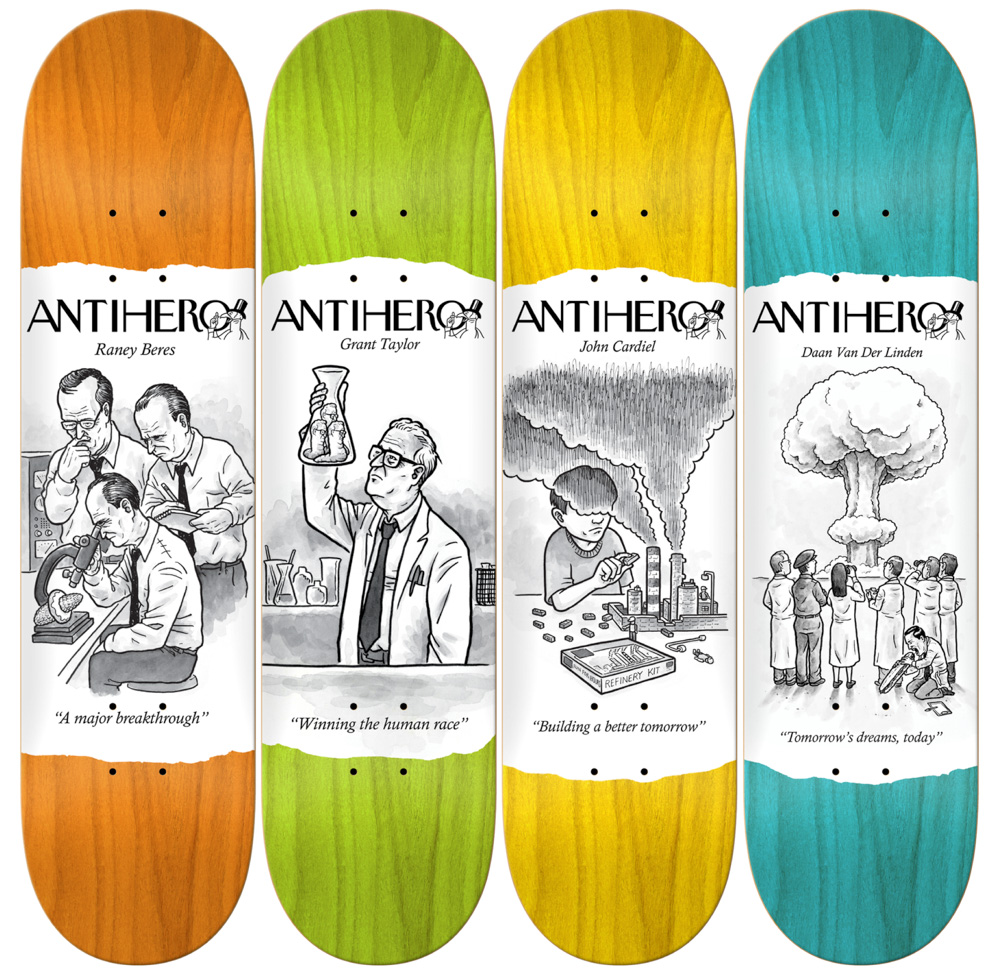 After college, Todd found himself living in San Francisco and working an entry-level job in the art department at Deluxe Distribution, a huge skate distributor for Real Skateboards, Stereo, Spitfire Wheels and Thunder Trucks, amongst others. It was the mid-‘90s and skateboarding was much smaller than it is today—there were literally three guys in a room, doing all the designs for the whole company. Todd was one of them and after a few people quit, he became the art director.

Todd explains the beginning of Antihero this way: “[Deluxe] decided that they wanted Julien Stranger—who was riding for Real at the time—they wanted to give him his own company because he’s just such an interesting, smart person who had enough ideas and motivation to deserve his own thing. And so he grabbed John Cardiel and they assembled a team and it was off to the races.” 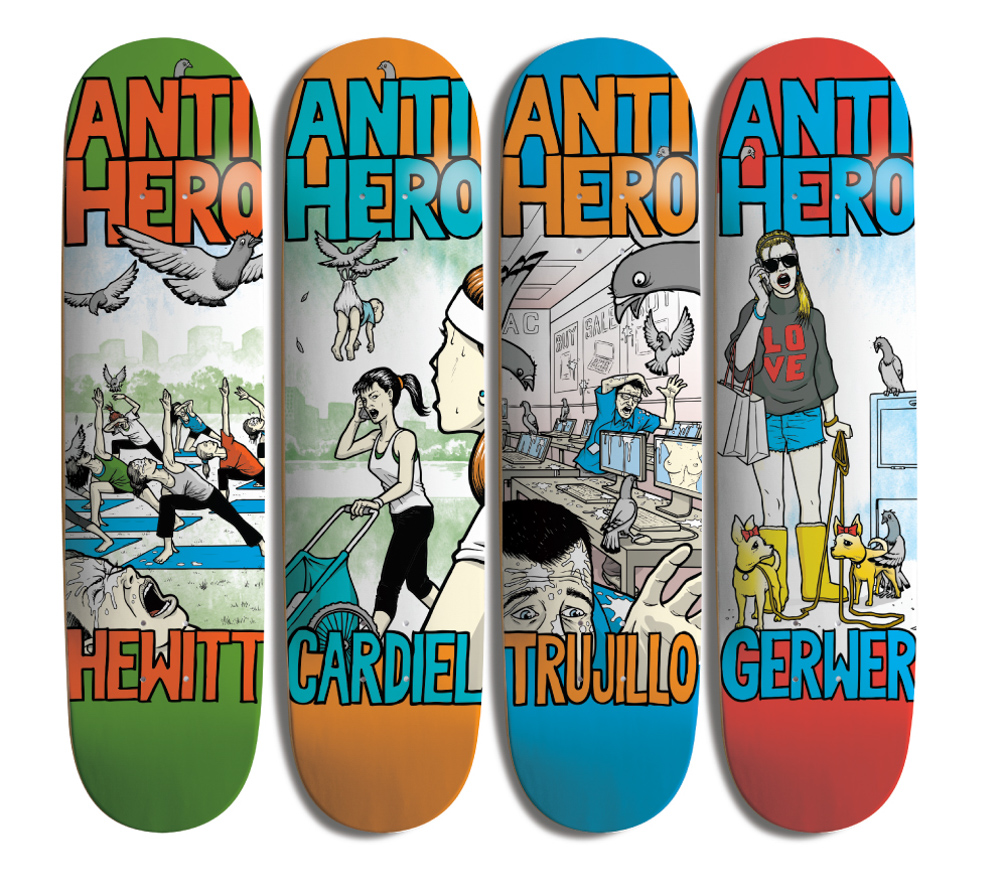 “I was there,” Todd adds. “I’d been working with Julien on all his Real graphics for a while and he was sort of stuck with me.” Now in its 23rd year of operation, Antihero has an almost cult-like following and a reputation for rawness and grittiness that is unseen elsewhere. As the industry continues to grow and inevitably get more corporate, Antihero still retains a totally DIY punk-rock approach to their skateboarding, their attitude and their artwork.

Now in his 40s, I ask Todd what it’s like to live through multiple eras and trends, both in skateboarding and in art. “If I were to say that I just stick with one thing and cling stubbornly, I think that’s how you get old overnight and no longer remain relevant,” he says. “We all pay attention to what everybody else is doing and then we do our version of it. Fortunately, no one else really does what we do with Antihero graphics—no one else has the same things to say.”

While some of the older companies seem to be falling by the wayside, newer ones are pushing the skate-art aesthetic in different directions—I mention companies like Fucking Awesome, Polar and Pass~Port, wondering how Todd views them.

“I love looking at a lot of that stuff,” says Todd. “A lot of what you see with the new art-school graphics is a pure design and it’s not really message-driven. A lot of the time they look great so I’m not going to make fun of any of that. They don’t do what we do and we don’t do what they do and there’s room for everybody.” 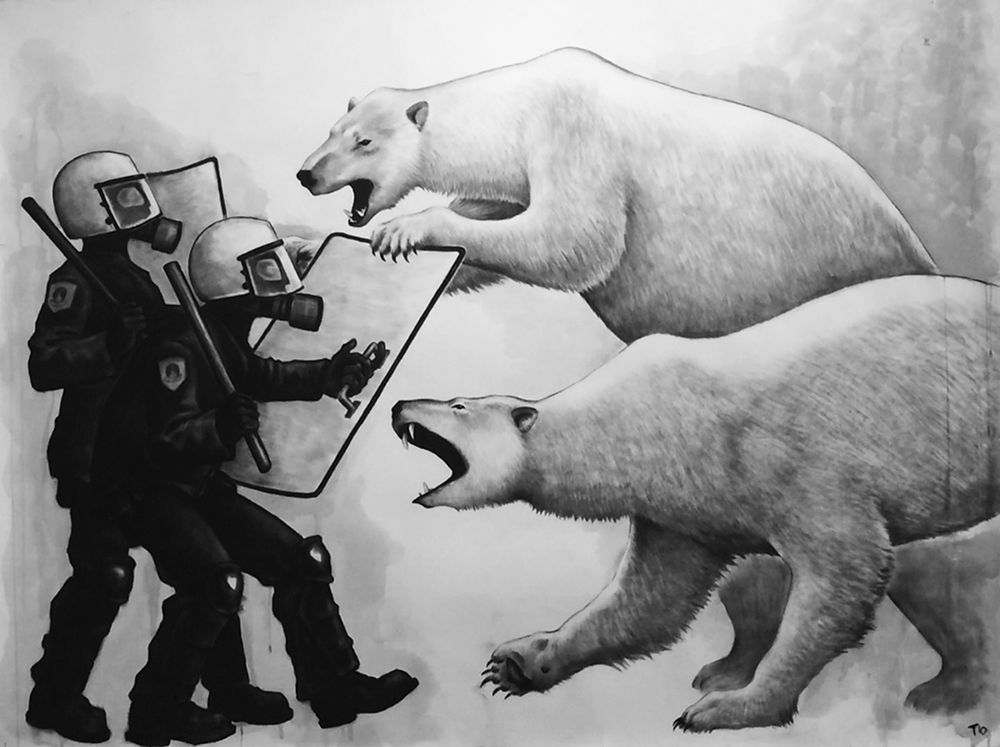 Skateboarding is not only bigger than ever, but also becoming more divided in terms of different genres. “It would be stupid to sound stubborn and say that you ignore it but for Antihero it would also be really stupid to look like you’re trying to fit in,” says Todd. Evidently, Antihero’s ‘fuck authority’ approach still seems to be a safe bet among a lot of skaters, especially those who tend towards shredding tranny and swilling beer. “Conflict with cops is nothing new to anybody who skates,” says Todd. “So it makes perfect sense to have that on skateboard graphics.”