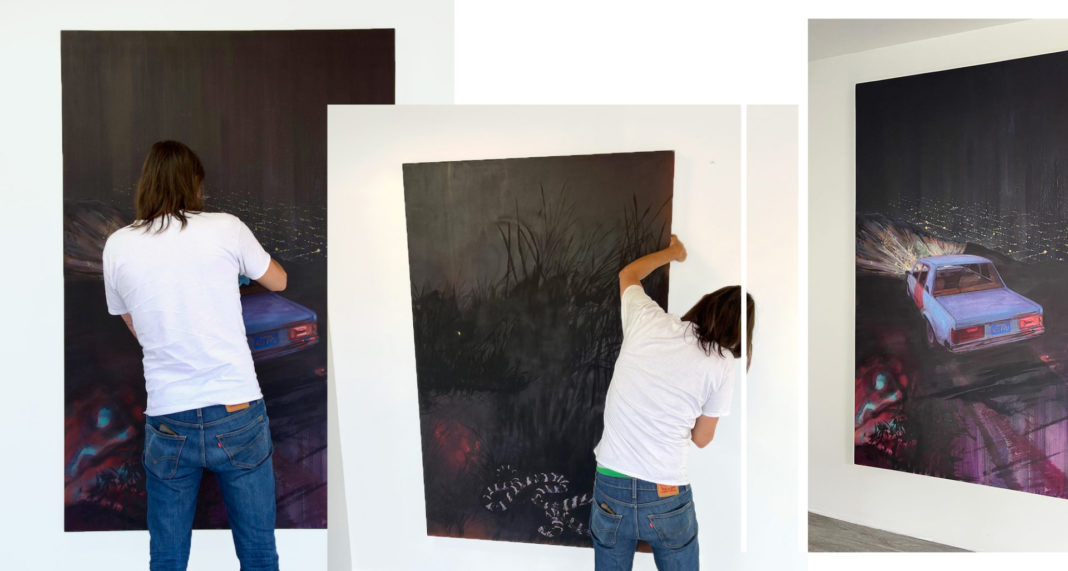 Timothy Ernst is an LA-based artist showing at Oolong Gallery, CA right now, and we really dig his recent work.

Here’s why: it’s nighttimey. It’s dark and kinda spooky-beautiful, but also comforting and cozy in a weird way. They’re also very LA. One painting (not yet finished) features a couple of coyotes sniffing around the backdoor of someone’s home, and if you’ve ever been in LA, you know that’s a thing. Spooky. But also cool. Which, I think, is the best way to describe the new painting coming out of Tim’s studio. I had a chat with Tim about his process, inspiration and whether he’s related the Surrealist Ernst, first name Max.

If I am, I’m not aware of it. I had a drawing professor in undergrad who joked to the class about it once. We were at a museum looking at Max Ernst work, and he said, ‘And here’s Max Ernst—Tim’s Uncle.’ Several classmates came up to me afterward asking me if it was true.

So, you’re definitely not?

How good would that be, though?

Could be a good thing but could be a curse. It’s always complicated when someone is related to or gets compared to someone successful. Would be an easy path for finances and it wouldn’t hurt having Aunt Peggy too!

Tell me if I’m wrong but your most recent paintings are dark and sorta canyons at night vibes. Can you talk about the feeling you’re going for?

Mystery, memory, contradiction… maybe some magic. I like to set up environments that codify those things. The night colors, the light, the familiar, the strange. You never know what you’ll see. It all finds a way into my work. Watching life cling to the inhospitable, and then the bending of objects—and people—to accommodate harsh conditions. It’s all in there. 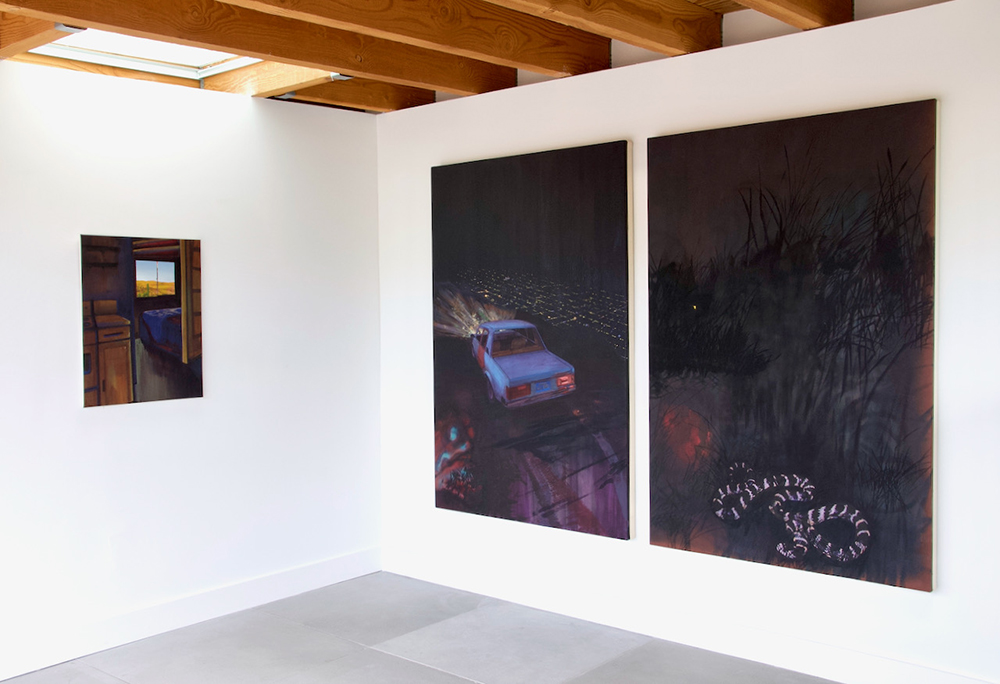 Right on. And they’re very LA-centric paintings, right? Like there’s one I’ve seen that had a couple of coyotes hanging around a back door in the dark.

Yeah, mostly. It is where I live and work, after all. I travel around the city and nearby areas a lot and there’s so much material. There are so many different microcosms here. I love the contrasts, and l love creating that in my work; the contradictions and the cultures are vast and fascinating. LA is loaded with opportunities for narrative. Places I can insert my memories and magic. The mysteries and contradictions usually handle themselves.

Are you from LA originally? What’s your story?

I was born here in SoCal. Corona, CA. It was orange groves and ranches back then, but now it’s a wasteland of condos and traffic. We moved to the wilderness of Lassen County when I was four to live on a sort of commune. I started school there, but after a couple of years I moved to New Mexico, a few other places, and finally to Louisiana when I was 13.

So, you’ve moved around a lot?

Yeah. I lived in Louisiana then until I attended college, then I took a break and met my ex-wife. We traveled out to Portland, OR for a few, then I went back to Louisiana to finish college. After I graduated, we left New Orleans and moved out to SoCal, and I worked at a blue-chip commercial gallery until I couldn’t stand it anymore. Then we found a spot out in the desert for a while where I had an amazing studio but the area was so depressing, we left. We went back to Louisiana around the time of Katrina, buying a house and trudging along getting it restored until we had our fill of the backward political environment… So, then we returned to SoCal. My marriage fell apart at that point and I moved to Venice Beach as a bachelor. That was many years ago and I’ve lived all over this city since. I’m currently in the Pico Union area of Los Angeles and have been here for the last 4 years.

How did you get started painting? Was it something you were always gonna do, or…?

I’ve drawn, painted, and made things since I was a small child. It provided positive attention from my family, who weren’t as pleased with the direction as I got older and into college (laughs). I also received praise from schoolmates. The teaching staff wasn’t always happy about me drawing while they were teaching other subjects, but I was persistent. I remember drawing trucks, cars, and nude women for the bullies to keep them off of my back at new schools.

What does an average day look like for Tim Ernst?

Fairly average, actually. I’ve never been a fan of rising early, but I force myself to do so. I sometimes install artwork to help cover expenses, and that gets me up early but destroys your soul as the day goes on (laughs). Otherwise, about half of my days, I get up and make coffee and put on some music. That’s usually enough to get things going here in my studio.

Do you work on one painting at a time or?

I work on multiple artworks simultaneously so it keeps on moving. I take breaks and sometimes walk around the city at night time taking in everything around me: the light, the color of the sky, all the goings-on. It’s like a night-life film with no plot taking you for a ride.

Okay, what’s next for you, Timothy Ernst?

I’m excited to start another series of work that harnesses the blown-out sun-filled daytime of SoCal. 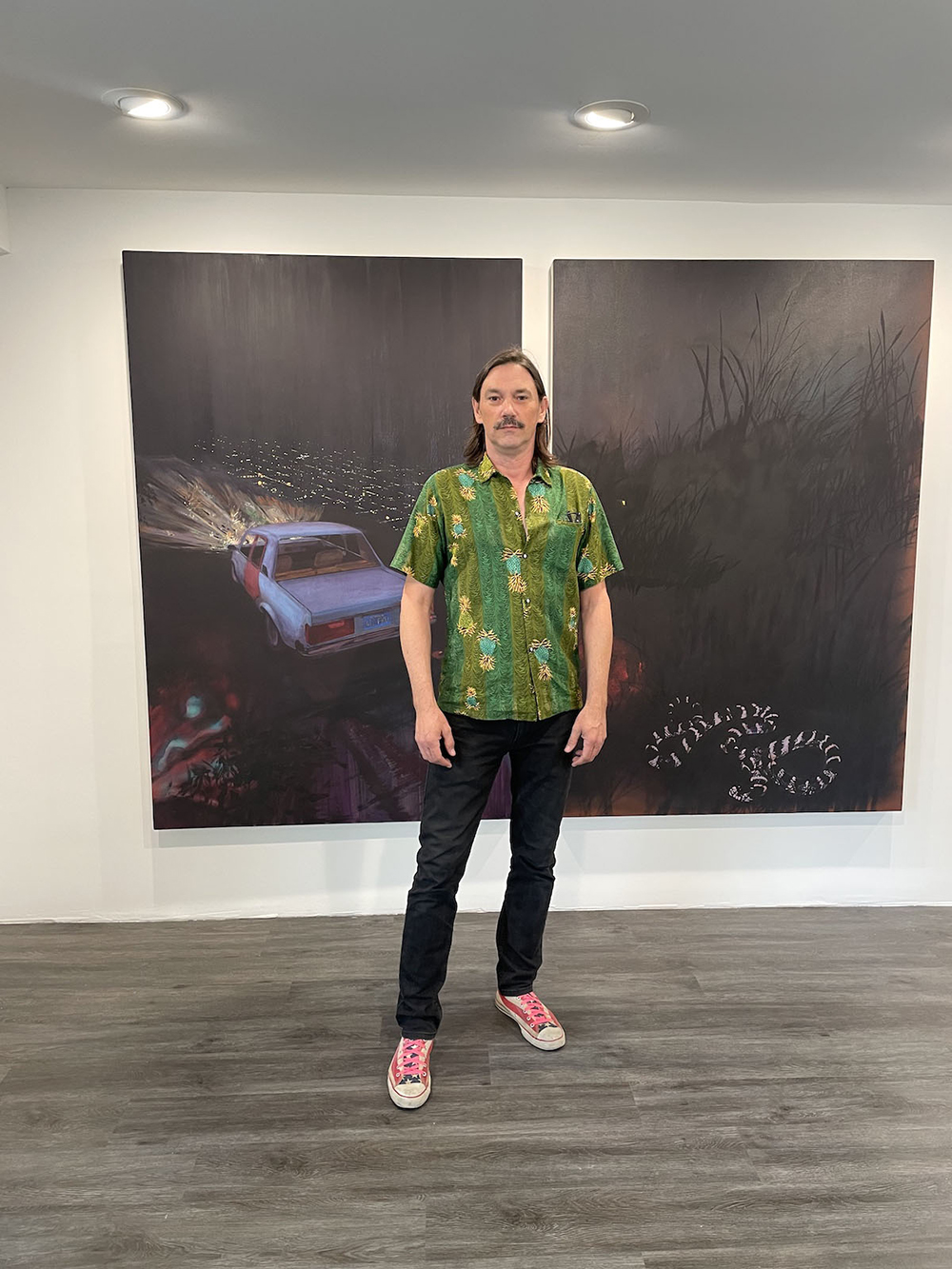