The artist Thomas Campbell has made a skate film called Ye Olde Destruction, and it sounds very different to what we’ve come to expect from a skate flick.

Sounds amazing, no? We gave Thomas a buzzzzzzzz. 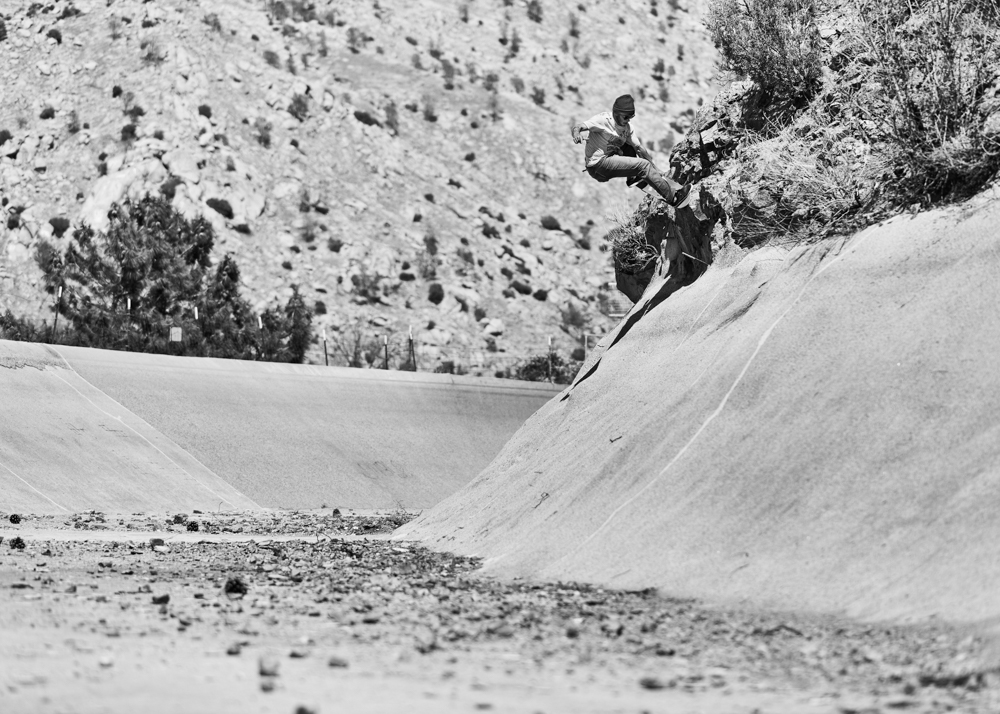 What’s the premise of Ye Olde Destruction? I know there’s two carloads of skaters, but is there a storyline?

So, you were going full Stacy Peralta narrative video, and then it changed?

I wanted it to be more or less what it is, with a minor altercation that leads to a smash-up derby at the end. I kind of came up with a different way of bringing them together and it being more natural and fun.

And it’s all shot on film?

It’s probably ninety-five per cent film and a little bit of other stuff.

How long is it?

I don’t know yet–it’s not done.

That’s amazing. So, is it edited together like a modern skate flick, or…

I think that’s probably one of the most interesting features of this film. When I started making it, I thought that it was going to be more of a quick-cut, modern-feeling piece. But, at the end of the day, that’s just not me, and I don’t edit or see things like that–especially when you have this beautiful 16mm film. So, the pacing is different to what you’re getting in modern skateboarding films, and the music will be more atmospheric. I’m not saying I’m reinventing the wheel or anything, but the feeling and experience is going to be different. Probably a lot of people might not like it, they’ll just be like, ‘What the fuck?’

Does it have that ‘skate everything’ kind of feel?

Yeah. Skating (everything) was what I always felt like skateboarding was. I started skating in 1974, and, coming through the 80s, I always just saw skateboarding like that; and it became more divisionary in the 90s. My feeling about it has always been ride everything, whatever. That’s how my friends and I always looked at it.

How do you feel about the current state of skateboarding?

I think it’s at this really beautiful point right now. People’s approach, they’re just like, ‘Yeah whatever, I’m gonna wallie off this.’ People like Evan Smith just don’t give a rat’s ass, he’ll just do anything he wants, whenever, he doesn’t care and I love that because that’s what skateboarding is: freaks just doing whatever the fuck they want.

And that’s how it should always be, right?

Yeah! Anyway, skateboarding is at a really great point, and (this film) is almost a celebration of what it is. There are some throwback ideas to it, and we did some fun stuff; we built a bunch of fun stuff. This one trip, we were down near the Mexican border with a nice crew, and I really wanted to build two quarter pipes on the car. One at the back and one at the front and people could do tricks from the quarter pipe at the front and across the roof. We were trying to go down to Slab City but it just felt weird, and we didn’t really wanna deal with the people there. Al Partanen, one of his friends gave us the coordinates to this, like, reservoir out in the middle of nowhere that no one ever really skates. Basically, we just went down there for two days, camped, built these quarter pipes and skated there for two days. It’s interesting cause we did go skate a bunch of other stuff on that trip, but that thing, that energy and feeling, and inclusiveness of that experience… I’m probably not even gonna put any of the other footage from that trip in the movie–it’s just that. The trip went for six or seven days, and that was just two days, but like everything else just falls to the side because of that energy. We’re making other edits that won’t be in the film but anywhere, it was really cool.

How did you finance the film? It’s not a branded thing, right?

So, what I did was, my friend Lee at Creature Skateboards, he has been really helpful with the film. He helped me get 50 raw skateboard blanks, like with the veneer sticking up, glue dripping off, no holes. Like big ones, big blanks. And then I gave those to all of my community from the art and skateboard world and everyone painted these blanks, then I’ve been auctioning them off. It’s a really long list and everyone really helped out, such a crazy, awesome group of people.

Who were those people?

Wow. And that paid for the film stock and everything?

The film was more or less six years in the making; we did a lot of trips. So, it didn’t pay for everything, but it really helped. I didn’t want to have sponsorship.

Is it all going to be in black and white?

Yeah, all black and white.

That’s going to look beautiful on the 16mm, all grainy and stuff.

It’s interesting because it gives it this nice continuity regardless. There’s this guy name Sergej Vutuc and he’s doing all the type for it, I think he might be from Czechoslovakia but he lives in Berlin. That’s interesting because I grew up making zines and trading them with Tod Swank and Andy Jenkins and Fred Conrad and all those people, and Sergej seems like the modern iteration of that zine idea. It’s cool to incorporate him; it feels like a really natural movement.

So, when is it officially coming out, when can we go watch it?

It’s going to come out in December with a book, and the only way you can watch it is by getting this little book with a download code.

Is it a photo book?

Yeah, people like Brian Gaberman and Jai Tanju, Arto Saari, French Fred, and Anthony Acosta and myself shot all the pictures. Once the book kind of sells through or it feels like the right time, we’ll release the film online for free.

When you say smash-up derby, were you literally smashing the cars into each other?

Yeah! It was really fucking awesome. It was an awesome spot in the middle of nowhere, with hills around it.

It was dangerous as fuck. I’m really happy that it worked out and no-one got hurt.