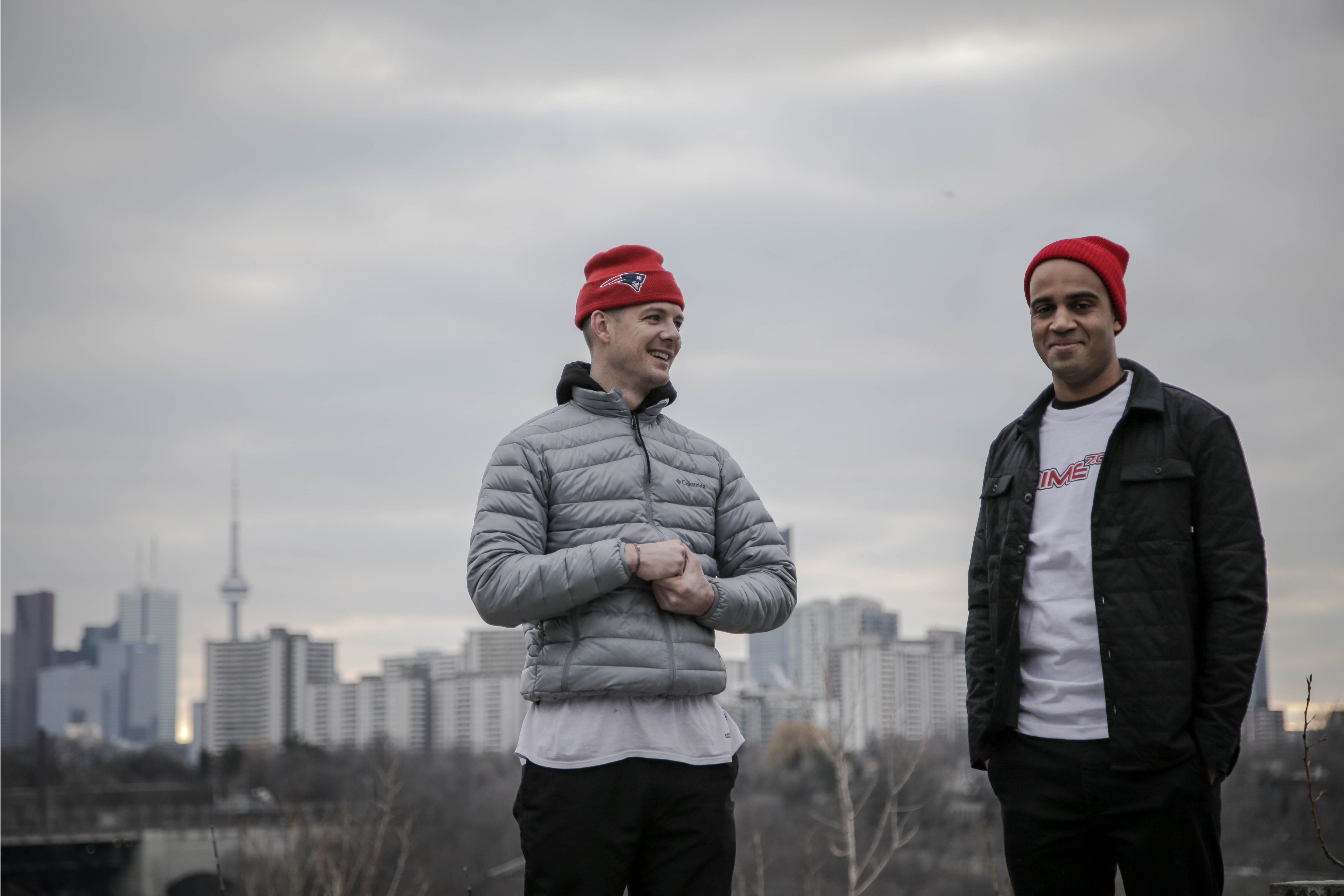 The third season of The Bunt kicked off earlier this month and the roster is already mighty as all fuck—episodes with Tim O’Connor aka “The Podfather”, man of the year Brian Anderson, and more dropping by the week (Mark Appleyard’s just hit the streets).

For a Canadian skate and sports podcast that hasn’t even been around for a full year, The Bunt—comprised of Cephas “The Ghost” Benson and Donovan “Dono” Jones—has made some tech-startup-esque progress in features, sponsors, quality and the show overall.

With support from Vans, a multinational cult following amassing and heavier pods being released every week, it felt like a good time to give the duo a shout and see how things first got, and continue to get, poppin’ in Studio E.

The Bunt has come a long way since jumping off seven months ago. Which aspect(s) of the show would you guys say fuel you the most in lining up and making the next episode?

Cephas: Getting to know a skater that I’ve looked up to or just really appreciated the way they’ve skated over the years is always fun. Get to ask stupid questions and get to the bottom of any nerdy things we’ve always been curious about. In our Tim O’Connor episode, he said that more often than not, skater’s personalities line up with the way they skate. I’ve always believed that to be true. It’s fun to do the interviews and experience that firsthand with some of the legends.

Donovan: It’s a lot of fun for sure. Every interview is so different, so you never know what you’ll get, but The Ghost kills me in the studio every week—nothing but laughs. We’ve been skating since we were like 13-14 years old and now we’re talking to some of the guys we’ve been watching in videos and seeing in magazines for all these years. Never thought it would happen this quickly.

Rewinding back to The Bunt’s genesis, how did you two originally link up, and can you remember your initial thoughts on each other during that first encounter?

C: I just remember this tall kid dragging his heel on manuals, lanky as hell. There weren’t too many kids street skating downtown in those days, so our friendship was inevitable.

D: Honestly we’ve been friends for so long I can‘t even remember how we met. We were probably some little kids skating Shred Central skate park or downtown Toronto. I was probably just in shock by the size of his ghetto booty for such a young kid.

Was the idea for starting The Bunt arrived at independently by one of you, or was it some psychic shit where both mentally conjured the idea simultaneously while sitting next to each other on a busted ledge?

D: Well we definitely think alike. I mean, we both showed up wearing red hats looking like the clowns that we are to shoot the portrait for this interview. A couple of years ago Ce’ put me onto the Jalen & Jacoby Show, best podcast out, and from there I started listening to pods pretty much every day. Being fantasy sports guys, we always bicker about players and teams so we joked about creating our own show. Knowing that no one would listen to us just talk about sports, the idea of interviewing some of our more well known skate friends might generate some actual listeners, so we came to this happy medium.

Vans recently came on to sponsor season three. How’d that get set up and who from the Vans team would you guys be most hyped on lining up for an episode?

D: Vans has a really strong presence in Canada. They do a lot for the skate scene so linking up with them has been great. We were already friends with a bunch of the people at Vans so the whole process happened pretty organically, seeing as some of the Vans homies already listened to the podcast. As far as getting some of the Vans guys on the show, definitely AVE and Dill, the thought of The Ghost and Dill chopping it up already has me laughing.

The Bunt has managed to put out 24 quality episodes in the past half year, making you guys both the hardest working skateboarders in podcast and hardest working podcasters in skateboarding. Are you guys focusing on the podcast full-time now or do you have jobs outside of The Bunt that help support things?

C: I’m thinking about taking my talents to South Beach with all this newfound fame, to be honest. Hard work pays off baby… Nah, definitely still working. I work as a freelance production assistant on commercial shoots which is perfect because it allows me to give as much time to The Bunt as needed.

D: In all honesty, we have three jobs: the pod, our real jobs, and our fantasy teams (the third being the most important).

Cephas always seems to find a way to hijack an intriguing part of the interview and unabashedly ask the featured interviewee’s sponsors to hook it up. What’s the current box-requested to box-received ratio?

C: Hijack!? How dare you? Making it sound like the guests are about to explain the meaning of life and I cut them off right as it’s all about to make sense I’m probably 1-for-15 or something? But boxes ain’t gonna ship themselves! Gotta keep fiending.

D: I think it’s like 3-for-27. Cephas is reaching new levels this season and asking people to create companies and send boxes in.

Of all the episodes you produced in 2016, which interview has been your favourite to conduct and why?

C: A lot of fun ones, but maybe Paul Rodriguez just ‘cause it was so early on and the circumstances were so randomly perfect. We hooked up with Spanish Mike (Primitive Skateboards team manager) at his hotel in Toronto. Went up to his room to do the interview with Spanish. About halfway through, Paul walks in and we’re like “oh shit”. He just sits there quietly on his bed giggling every now and then while we finish our interview with Spanish. The second we were done, Spanish says, “Hey Paul, want to chalk it up with these guys?” and he’s like “yeah, why not?” Knowing Spanish and Paul were sharing a room, we came prepared with some questions for Paul just in case. The rest is history. We walked out of there at 2AM super hyped. It was actually the sixth interview we ever did but we released it way later because we barely had a following at the time.

D: All of the in-person interviews definitely have a different vibe to them. This is a hard one. I’ll go with Brian Anderson. Never met or spoke to him before the interview, always admired his skating and style but never thought he would be on the show, so it was kind of surreal interviewing him. One of the nicest people I’ve ever met. I remember texting him on his wedding day about posting a video on his Instagram to promote his episode, he sent back a few photos of him and his partner saying “getting married today, will text you tomorrow,” when he definitely didn’t have to.

Best piece of feedback you guys have gotten on the show?

C: For me it came from my boy Ludovic Lolinga, who regularly emails the show and loses to me in fantasy basketball. We made a pilot episode that we never put out just to get some feedback from six friends. He said we sounded too scripted and to be ourselves. That really stuck with us and the more we did it the more relaxed it became, which I hope makes it easier for people to listen to.

Last one—it’s a double scoop. Are there any lost or damaged interviews you guys have stowed away on hard drives, and can you drop any tips on some of the upcoming heat that season three is packing?

C: Maybe we’ll put out our pilot one day because it’s so bad that people might find it funny. The other secret gem is the Grant Patterson episode. He was pretty drunk when we recorded it and was over it the next day so it was only available for seven days. Only a couple hundred people got to hear that one and it was actually hilarious with so many shots fired. Maybe one day if someone can convince Grant to let us put it back up the world can get in some good laughs.

D: Someone should write up a petition and send it to Grant, definitely one of the best interviews for sure. All I can say for this season is that we bringing it back to Canada.

Hottest Canadian female in the past decade?

You guys listen to Gucci Mane?

Besides The Bunt, best hub for original skate content?

Landing drink (and meal) of choice?

C: Slice of pepperoni and a Stiegl Radler
D: Yangjing and a burger

Non-skate-related company you’d be most down for having sponsor an episode?

C: The NBA. I want season tickets to the Raptors and a free league pass for my expert NBA analysis.
D: The Ben Blundell and Tyler Warren episode was sponsored by Hornitos, that worked out well. Any sort of tequila company.

Get The Bunt straight from the source, right here: