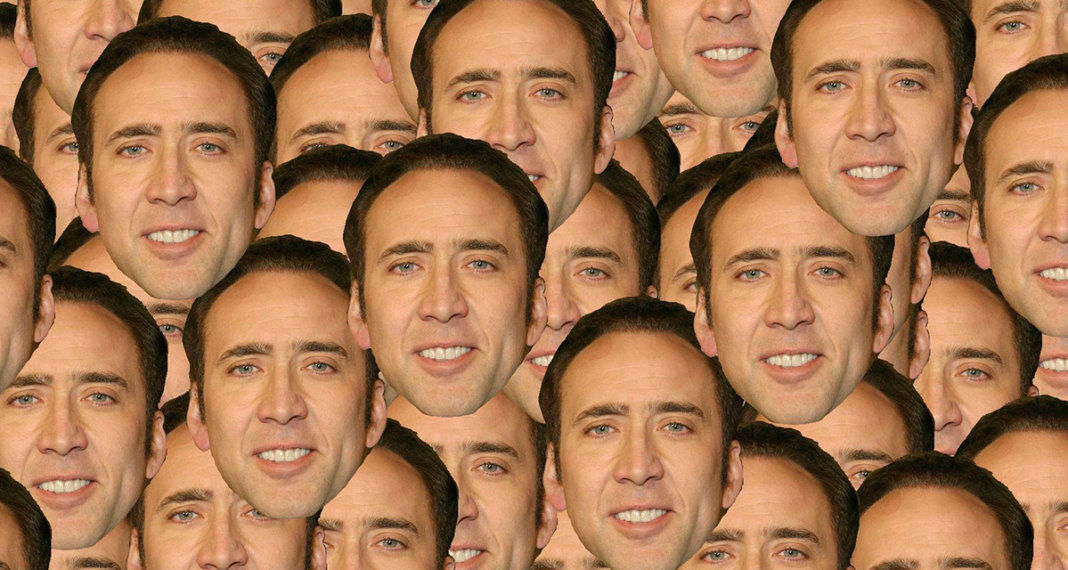 Nicholas Cage is an enigma.

The eccentric, over-the-top actor recently revealed yet another strange story about his life during a chat with close friend Marylin Manson for Interview magazine. It turns out Cage is a gambler and managed to win $20K in just 20 minutes, and then gave the money to charity. ‘In 20 minutes I turned $200 into $20,000, so I went and found an orphanage in the Bahamas, met all the kids and the headmistress, and said, ‘This is for you,’ Cage told Manson. ‘I put the 20 grand in her hand, walked away and never gambled again, because if I did, it would ruin the power of that moment.’ This latest tale from Cage is just one in a long line of surprising stories from his strange life. While many are well known, here are six that you’ve probably never heard of.

Naked Stranger Eating An Ice Cream And Watching Him Sleep

Waking up to someone standing over you would be frightening, but when the person is completely naked and eating ice cream, it adds a whole new level of terror. This exact scenario happened to Cage when he was living in California during the mid-00s. Talking about the ordeal to reporters, Cage explained, ‘It was two in the morning. I was living in Orange County at the time and was asleep with my wife. My two-year-old at the time was in another room. I opened my eyes and there was a naked man wearing my leather jacket eating a Fudgesicl in front of my bed.’ In true Cage fashion, he took it all in his stride, managing to talk the man out of his home and resolve the situation peacefully. The incident did put the jitters in him though, and Cage refused to live in the house and moved to the Bahamas.

Almost Getting Arrested For Impersonating A Pilot

Cage is a great late-night show guest because he’s always willing to tell funny stories about himself, like when he appeared on Letterman in 2012 and regaled Dave with a tale about how he almost got arrested for impersonating a pilot. On a flight from LA to San Francisco, Cage managed to commandeer the PA system and began broadcasting to passengers, telling them that this was the pilot speaking and he ‘wasn’t feeling very well’ and was ‘losing control of the aircraft.’ This didn’t go down well, particularly with fellow passenger Charlie Sheen, who had an eightball taped to his ankle. Cage was eventually subdued by the crew and upon landing was berated by the pilot, but managed to charm his way out of jail time, much to Sheen’s relief.

He Was Stalked By A Mime

This one sounds too absurd to be true, but Cage insists he was followed by a mime during the filming of Bringing Out The Dead. In an interview with Parade magazine Cage explained, ‘I was being stalked by a mime—silent but maybe deadly. Somehow, this mime would appear on the set of Bringing Out The Dead and start doing strange things. I have no idea how it got past security. Finally, producers took some action and I haven’t seen the mime since. But it was definitely unsettling.’ This story conjures up many questions: Who was the mime? What was he doing there? Why was he stalking Cage? Was Cage on drugs?

There was a time where Cage really indulged in the Hollywood lifestyle. Unlike other celebrities who used their earnings to buy fast cars or nice homes, Cage spent millions on castles, dinosaur skulls and an array of exotic animals. In one spree, he spent $276,000 on two poisonous cobras and an octopus. The octopus set Cage back $150,000, and he told the LA Times he found his eight tentacled friend ‘restful.’ He also believes the octopus makes him a better actor. How is anyone’s guess, but if you’ve seen him in Color Out Of Space or Mandy, it’s clear his performances have been influenced by something non-human.

That Time He Took Mushrooms With His Cat

Another Letterman appearance resulted in Cage detailing the time he got high with his cat. Somehow his feline friend, Lewis, got into the fridge and started chowing down on his magic mushrooms. Not wanting to let Lewis trip on his own, Cage munched on a few mushrooms himself. ‘I remember lying on my bed for hours and Lewis was on the desk across my bed and we just stared at each other for ours—not moving, just staring at each other, and I had no doubt that he was my brother,’ Cage told Letterman. He was also quick to point out he doesn’t do things like that anymore, just to make sure he doesn’t have PETA breathing down his neck. Oh yeah, Cage also said Lewis once said ‘hi’ to him. True story.

He Purchased Two Castles In Search Of The Holy Grail

Cage has a passion for all things supernatural and occult. While he admits to being a sceptic, he’s fascinated by the possibility of things such as ghosts being real. During his spending phase, Cage became infatuated with finding the Holy Grail, purchasing two European castles for $10 million and $2.3 million respectively. Similar to his character in National Treasure, Cage became infatuated with the mythology surrounding the Grail and bought properties because his research led him to believe they might house the Grail. His quest led him to tasting the waters of the Chalice Well in Glastonbury and exploring Rhode Island, and when asked if he found the Grail, Cage told The New York Times, ‘What is the Grail but Earth itself?’ Sounds like a great idea for National Treasure 3…