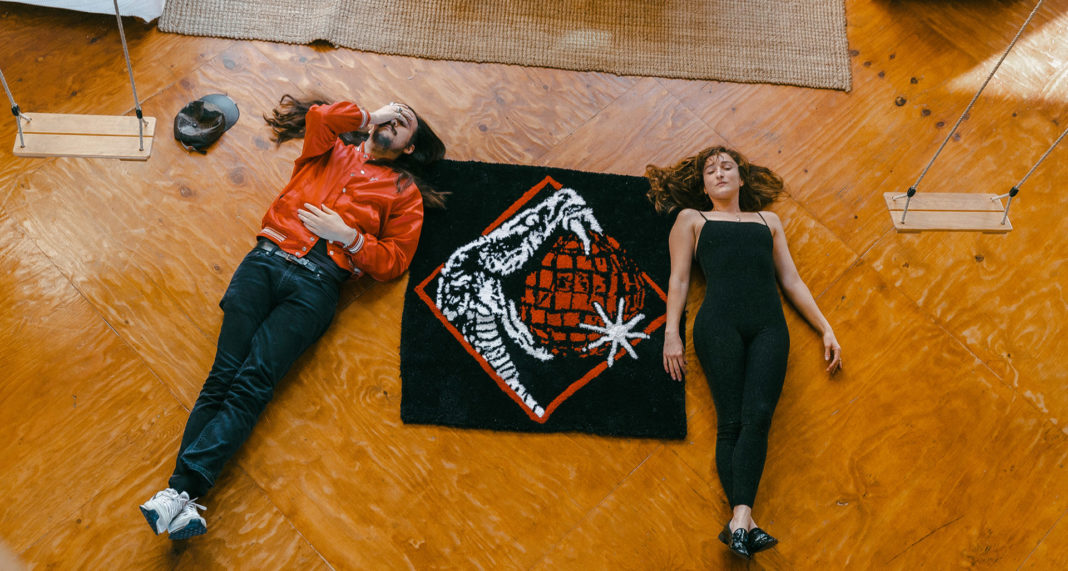 The best and greatest thing about Cobra Man—besides the high-energy joy-gasm that is their live show—is that they are an accident. Sort of.

Cobra Man are Andrew Harris and Sarah Rayne, and in 2017 they provided the soundtrack to The Worble’s New Driveway video, inventing a new musical genre (LA Power Disco) in the process. That was five years ago now, and since then the Cobra Man phenomenon has only gotten bigger. In fact, it’s grown so big that they need a big ol’ bus to go on tour—which is exactly what they’re doing next month. We gave Andy and Sarah a buzz in the lead-up to their first U.S. tour.

Hey, you guys. How’s it going?
Andy: It is crazy right now, dude.

In what way?
Andy: Just getting ready to tour.

Wait, so when do you guys head off?
Andy: The tour starts in 28 days, July 13th, so we’re wrangling designers, meeting with social media people, you know, we’re releasing a single soon… There’s just a lot going on. And, on top of that, me and Tom are finishing the next Worble video.

Well, thanks for taking time out to chat with us.
Sarah: No worries.

Alright, let’s talk about how you guys got started. You did the music for the Manramp video?
Andy: Yeah, I met Tom Mull in college; we were roommates. We had, like, six roommates, and I just remember day and night he’d be in his room editing skate videos. And at the same time, I would be in my room making music, like, I wouldn’t do my schoolwork. I’d just be making music, day and night.

What were you studying?
Andy: Graphic Design. I think Tom was studying English, but I don’t remember. Anyway, he was doing skate videos and I was making music, but we never thought to put them together. Then I moved out to LA and got a call from him one day saying they were coming out here, and they started getting some traction once they were out here. Thrasher was down to start posting their stuff but they needed music they could use. So, he hit me up and asked if I could do some music, so I did the Manramp thing, and that was cool, and then he was doing some other stuff for Element, and he asked me to make a song, and I was like, ‘Okay, I wanna make a disco song.’ And at that time, Sarah and I had been introduced, and we had randomly talked about disco—

How did you guys become friends?
Andy: We have a mutual friend named Joni, who I met working on The Eric Andre Show. Sarah had been friends with her for a long time. I don’t remember what the occasion was—somebody’s birthday or something—but we all met at a bar and Joni introduced us.

And did you guys just click? What did you talk about?
Andy: I feel like we just talked about disco and stuff, right Sarah?
Sarah: Yeah, we were just talking about music and it turned out we had the same taste in music. At the time, Andy was working on something and he was like, ‘Do you wanna come and sing on this thing for Element?’ It was Element, right?
Andy: Yeah. And when we met, it wasn’t like we talked about starting a band.
Sarah: Yeah.
Andy: We were hanging out, and I wanted to have a girl singing on this disco track, and I was like, ‘Oh, yeah, that girl Sarah likes disco.’
Sarah: You were directing something, actually, and you asked me if I had any music for it.
Andy: Oh, that’s right. I was directing this commercial that was supposed to have Fabio in it.

No way.
Andy: Yeah, but he ended up backing out.

Bummer.
Andy: I met with him though! He was wearing, like, a linen suit that was kinda Ombre print, so the pants were blue and the bottom of the shirt was blue and faded up into white. It literally looked like someone had taken him and dipped him in a bucket of blue ink.

Of course.
Andy: and when he left the office, the place smelled like him for about two hours.

I wonder if it what his own scent. He has a cologne, right? He’s Fabio.
Andy: You know, it probably was… The reason he couldn’t be in the commercial was because it conflicted with one of the products that he sells.

Hilarious.
Andy: So, anyway, when and worked together with these dudes in a studio, and they were like, ‘This is sick! You should do, like, a disco thing!’ And I always wanted to have a disco band since I was a little kid…

And Sarah, were you singing and making music when you guys met?
Sarah: Yeah, I’d been in a bunch of different bands and I had a deal with Warner when I was, like, 20, and I was working at a studio, making music for films and tv and commercials. I’ve been singing and making music for a long, long time. So, when Andy and I met, we talked about stuff and it was, like, Cobra Man turned into everything we ever wanted to make. It was like, if we had our dream band, what would we do? What would it be? And it became this.

Here’s a super-dumb, lame never-ask-that-question question: where did the name Cobra Man come from?
Andy: Well, we had some ideas kicking around—

Name ideas?
Andy: Yeah, and they were just terrible. I mean, not terrible, but they were forgettable.

Old Acid?
Sarah: Yeah.
Andy: I guarantee you I could find a band with that name—or something like that name—playing in LA tonight.
Sarah: We needed a name because Tom was finishing the video and he was like, ‘You gotta pick something so I can put it on the credits.’

Right. So, when did you guys start playing live?
Andy: Well, we struggled through making the first soundtrack for Tom, and I think we finished it the night before the release, and we planned to play the songs at the premiere of the video. And it was just me and Sarah, and I was bashing a crash cymbal and Sarah had a keyboard… And I think we’d practiced, like, twice? It was just us and the tracks.

Right.
Andy: And I was like, ‘No one is gonna like this.’ But we kinda just went all-out, and people sorta went nuts. Like, I remember my boss at the time came to the show, and I’d never seen him wil’ out before, but he came up to me after the show and hugged me, and he was drenched with sweat. Like, he has just, like, fully leaned in (laughs).

That’s awesome.
Sarah: We go nuts on stage, and I think we pride ourselves on that. And when it was just Andy and me, we were like, ‘We have to do this, we have to perform well because it’s just us.’ And now there’s a full band, but we still bring that energy to a performance.

How big is the band now? How many people are going on this tour?
Andy: There’s seven of us in the band, including me and Sarah, and then we have some crew people, and then the while Worble crew is coming too. There’s like fifteen or sixteen people going on tour.

So, in five years it’s gone from just you two in a room making music for a friend’s skate video to, like, almost twenty people going on tour.
Sarah: Yeah. 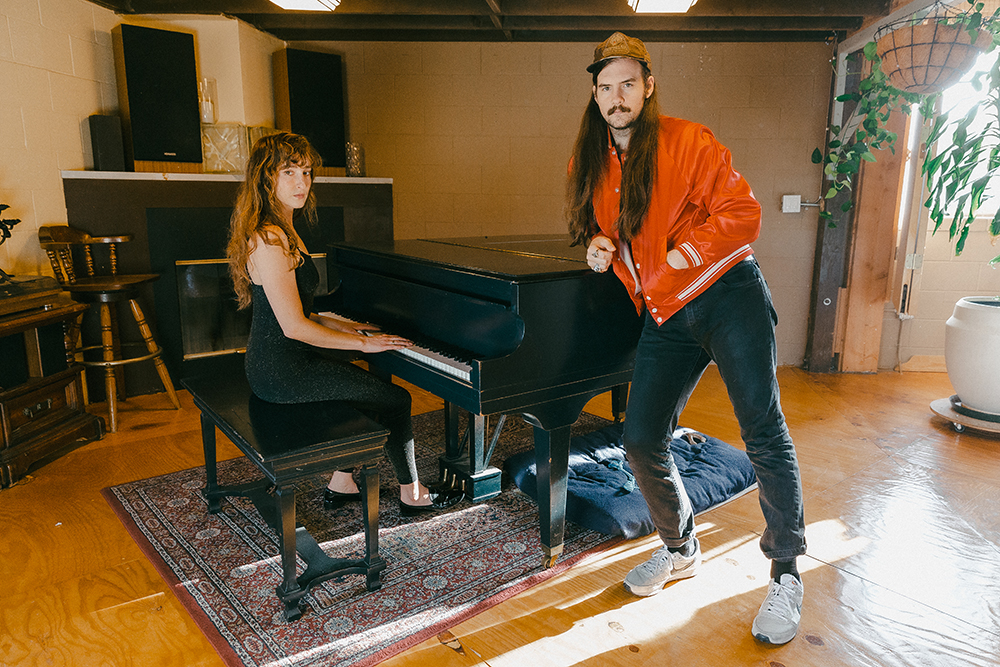 And it’s almost accidental. It started with you two and now it’s a seven-piece band.
Andy: Yeah, but I think we’re cutting it off at seven. We’re not getting any bigger. Like, we have a saxophone player who absolutely rips, but we’re not gonna have a horn section.

Get a horn section!
Andy: No, no. Seven is the cut-off because otherwise, it gets into… You know when you see a singer and they have a huge backing band?

Yeah.
Andy: It’s like, Paul Simon and he has, like, a fifteen-piece band. I don’t want it to be like that, I want it to still be a band, you know?

Are you guys the bosses?
Andy: Well, we’re not like James Brown where we’re threatening people, but we definitely try to run a tight ship.
Sarah: We were just talking about this. People think we’re a party band—and we are, and the show is a party, but it’s hard work for us. And we have that balance where, yeah, we’re having fun, but it’s work, you know?

Right, right. Okay, so where is this tour taking you?
Sarah: We’ve got 17 shows over 24 days. We’re doing a full circle around the US. Our first show is up in San Fransisco and then we got across and back around, ending in LA.

Wow. You guys are off an adventure. I wish I was coming.
Sarah: Oh, yeah. It’s gonna be fun.
Andy: And it’s a full operation. Doing what we’re doing, it’s very ambitious to do, like, the whole Do It Yourself thing and coordinating all the different stuff? It’s crazy. But, you know, we waited till the right time to start touring because we like spectacle and we wanna put on a really good show. We wanted to wait until we had the means to do that, and the time is now. There are people out there who have been waiting, like, five years to see us, and we’re gonna make sure that they’re not disappointed. 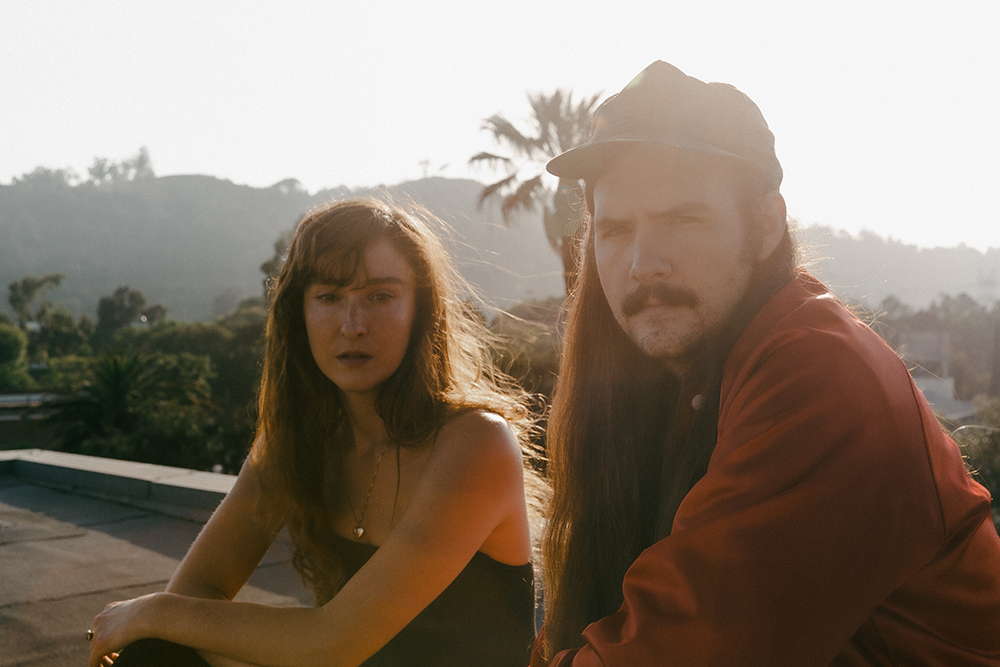