When I heard tell of Dave Carnie going to work on the relaunch of Creem magazine, I thought, ‘My god. Now, that is perfect.’

And apparently, the universe felt the same way because, as you’ll see in the interview, the whole thing was set up celestially by those unknown forces that make cool shit happen in our lives. Dave is perfect for Creem, and Creem is ideal for Dave. He’s a legend, and I know I’m not alone in saying he was one of my heroes growing up. As editor-in-chief of Big Brother skateboard magazine, Dave showed me how being naughty and silly could be turned into a career, and so I started trying to make people laugh with words, too—that’s how I ended up here in my underpants with spaghetti sauce matting my chest hair, staring at a laptop for Monster Children. These days, I’m lucky enough to count Dave as a friend, and making this call to congratulate him on his new position at the all-new Creem magazine was one of this year’s highlights. 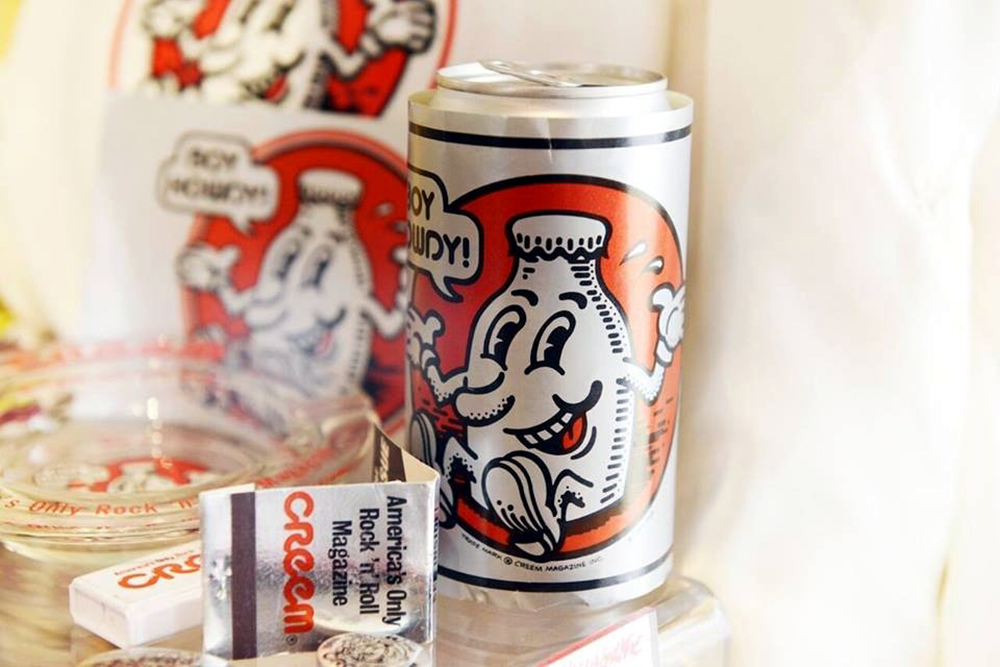 Dave! How are you?
Good, good. How have you been?
Great. Congratulations on the new position!
Yeah, thanks!
You’re back in publishing.
Yeah, it’s been a while.
Big Brother was the last time you were up to your neck in publishing, right? Or was it The Skateboard Mag?
I was a contributing writer for The Skateboard Mag.
So, this is the first time you’re heading up a mag since Big Brother?
Sorta. There was this other thing that went on for about eighteen months. I was the editor-in-chief of… I think it was called 1806 magazine, but I don’t know if it counts as a magazine because it was more of a marketing device for Rémy Cointreau, the giant beverage conglomerate that owns Rémy Martin. So, it was a fucking cocktail magazine to promote their booze. I don’t know how many issues I did—maybe three or four—but we went to them with the idea of, ‘How about you pay us to go to various cities, and we’ll do whole issues just going to bars and drinking and writing about it?’ So, for one of the issues, we went to San Francisco, drinking and interviewing bartenders, and made a whole magazine about San Francisco—
Awesome.
Yeah, but I don’t know if it really counts. It was a weird gig. But we did such a good job—I think we actually won some ‘booze magazine’ awards. And then they decided to fire us and employ an ad agency to produce the mag, which was awesome. It was like, ‘You guys have done so good, and we’re winning awards, so we’re going to fire the team that did all the good stuff and then hire a team from an ad agency that’s going to cost us way more money.’ So, we’re like, ‘Okay, guess that’s the end of that.’
So stupid.
Yeah, but anyway, I just wanted to get the facts straight: no, the last magazine I was the head of was not Big Brother, it was 1806 or something, and I was the head of it. I’m not the head of Creem, by the way. I’m up there, though. I was actually just studying the masthead; there’s the CEO, John Martin, and then there’s the chairman—JJ Kramer, the son of the late editor, Barry Kramer—and I’m up there somewhere, I’m not running it, just stoked to even be on the masthead.

What’s your title?
They made me Editorial Director.
Are you excited? How does it feel to be back in the saddle?
I got really excited initially, but then the reality started to sink in. Right now, we’re on deadline, so I’m really excited about issue two, but at the moment, we’re trying to wrap issue one.
The heat is on.
Yeah, I went from really excited at the start to, like, ‘Wait, I have to do shit?’
It’s so perfect for you, though. You totally have the right vibe for Creem, and it’s such a major, iconic publication… Are you scared?
I’m not scared, but I know what you’re saying. Creem has a legacy. It’s iconic, it has a history and caused a lot of trouble. The coolest thing has been learning what this magazine was. There are a lot of weird fucking things I’ve learned about Creem…
Weird how?
Weirdly coincidental. Like, I was born the same year it was launched: 1969. Creem is a few months older than me, but we both lived through that ‘Summer of Love’—they were there for a few months, and I was there for eighteen days.
Right on.
The other piece of information I just learned from Jaan (Uhelszki) —who is this O.G. Creem writer and just one of the most fantastic people; she’s onboard again with the mag. Jaan is really into, like, candles and spiritual shit, so she catches this sort of thing—
What do you mean, what sort of thing?
Well, Lester Bangs, he’s sort of the biggest name that came out of Creem; they based a character on him in that film Almost Famous… So, he was just sort of a fuckhead, like, a really good writer, but also a fuckhead that stirred up all kinds of trouble. And he’s fucking great. I love him. But guess what? We have the same birthday.

You and Lester Bangs?
We were both born on December 14, although he was born in 1948.
Weird.
So fucking weird. Jaan just told me that last week. But before all that cosmic odyssey shit, I’d been reading old issues of Creem and realizing it was the Big Brother magazine of music. I never saw Creem, and I don’t think anyone at Big Brother did either. We were all too young in the 70s when Creem was in its heyday and doing all these weird fucking articles. Like, the first story I read… Actually, there’s something else that’s really coincidental.
What?
Well, a few months before they called me, I was at the recycling center by my house, selling some cans because we’re poor. When I’m there, I like to go through the paper dumpsters looking for old magazines and shit for my collage stuff. Anyway, that day, I found half a dozen boxes filled with this one issue of Creem magazine. It had a red cover and picture of Boy Howdy, and I flipped through it and thought, ‘I’m takin’ this one home.’ It was like a reissue or a best-of issue of the mag, like, ‘Hey, we’re comin’ back and this is some of our best shit,’ you know? And I was like, ‘cool,’ and I brought it home. And in it, I read this article by this lady named Jaan Uhelszki—
Jaan who is into candles and spiritual shit?
Yeah. And it starts off where she’s gotta interview KISS in, like, ’75, I think it was. And she’s talking to the manager, and she’s like, ‘I don’t want to watch the show—I want to be in the show.’
Huh?
She was proposing she come on stage and do a song with KISS live.
For the article in the magazine?
Yeah! And they were like, ‘Oh, okay!’

No fucking way.
Really. I was like, what the fuck? So, she flies out and meets the band, and they hang out, then dress her up with a bullet belt and some KISS makeup, and she goes onstage with KISS and does ‘Rock And Roll All Nite’.
That’s bananas.
I was blown away by that article, and I thought, ‘Well, that’s Big Brother.’ Like, we took Slayer to Disneyland, sure—but she fuckin’ played with KISS! And Creem magazine is full of that kinda stuff; they fuckin’ did it all the time! So, I never knew until now that they were a huge influence on me. I had no idea.
Wow.
So, that was earlier this year—
That you found the magazine?
Yeah. And then three or four months later, I get a call out of the blue from them: ‘Hey, we’re doing Creem Magazine again. You wanna come check it out?’
That is too weird.
Yeah, it’s been weird.
This shit happens, though. And I think you could be boring and just go, ‘Oh, same birthday as Lester Bangs, found the mag in a dumpster, thought it was amazing, got a call a few months later—that’s just a coincidence,’ but I really think there’s something at work behind the scenes sometimes, you know? Like, finding the magazine and being blown away by it, that was almost like the universe going, ‘Hey, check this out because I’m setting up a new gig for you with these guys.’

Thomas Campbell used to say to me—because I have weird coincidences all the time—he would say, ‘You’re really hooked up to the Cosmic Grid.’
You must be.
Yeah, but, you know, I don’t believe in anything, you know what I mean? It’s like, you can believe in Santa Clause, or you can believe that some dude won in an election that he didn’t; you can believe in anything you want, but that doesn’t make it true.
Why are you resisting the Cosmic Grid?
Oh no, I don’t resist it. I accept it. I’m just not saying that it exists or it doesn’t. I’m accepting of the idea of it, the possibility of it.
It’s real, dude, and you’re surfing it. So, what’s in this relaunch issue of Creem Magazine, the magazine that is your cosmic destiny?
It’s really good. There’s a lot of stuff in there. One of my favorite stories from the issue is about how mosh pits always go counterclockwise—
Is that true?
Yeah, and we’ve got an article about the phenomenon. It’s baffling. Go watch punk shows on YouTube; they always go counterclockwise. Some bands try to get the pit to go clockwise, like, ‘It’d be so punk if you went in the other direction right now,’ but they can’t do it; it all falls apart.
Maybe that’s because most people are right-handed, so they instinctually move counterclo… Actually, no, that’s stupid.
No, no. That’s a theory explored in the article. You’ll have to read it. 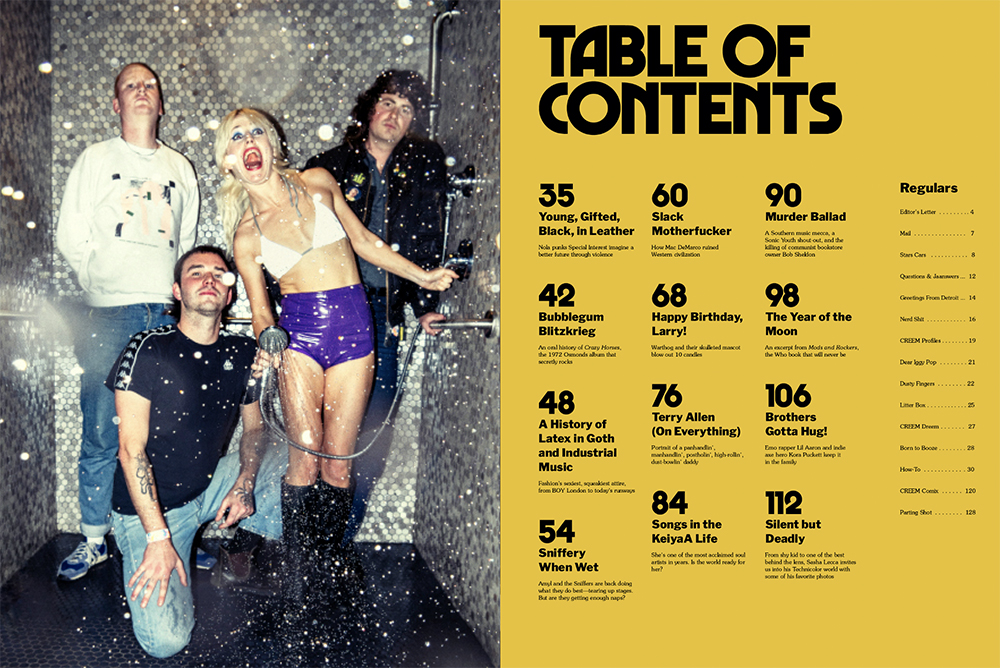 What else is in there?
Well, we’ve got some Australians: Amyl and the Sniffers have got a feature.
Radical.
There’s also an excerpt taken from a book about The Who that will apparently never be published. It’s got some classic, never-before-told Who stories, and Keith Moon does a bunch of Keith Moon stuff.
Awesome.
And we’ve got Warthog in there; they’re a favorite band of mine and you gotta check them out. And we’ve got a bunch of weird shit, a lot of new bands, and the style of music is all over the place. One of the fun things about working for Creem is that it’s very similar to Big Brother in that there’s a lot of attention paid to weird details and just hiding shit in the magazine, and good writing—that’s the cornerstone of Creem magazine. 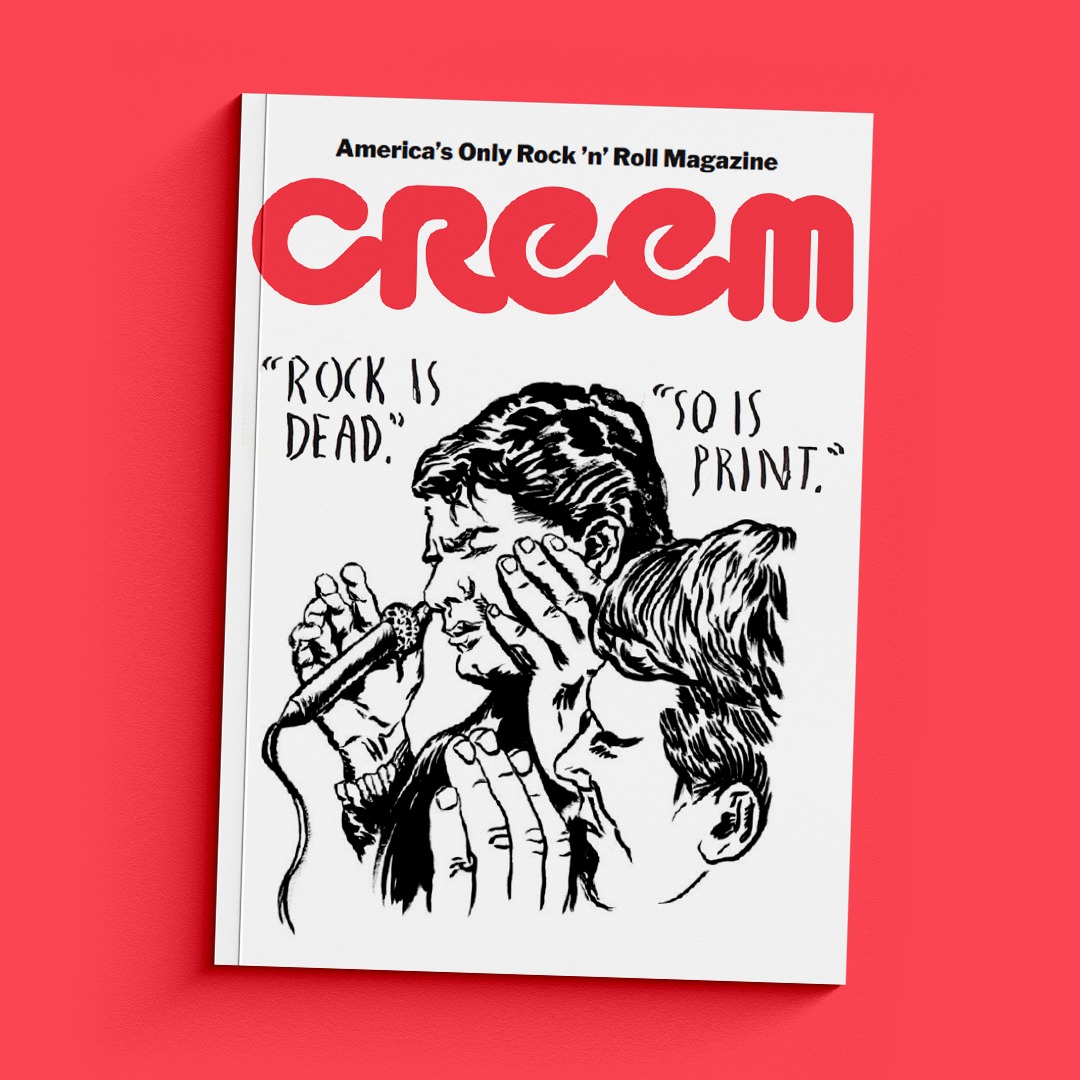 I can’t wait to see it.
Yeah, it’s a fun issue. And it looks fucking great! Today was the first day we got to look through the whole thing from start to finish. The layouts are great, there’s great photography, great writing, and all kinds of fun fuckin’ things throughout. And we got a Raymond Pettibon cover!
I saw that!
We’re so stoked on it.
It looks rad.
Yeah, it’s such a score. And it was made for us, and we’re stoked.
How many issues per year?
Four.
Amazing. Well, congrats, Dave. It’s such an amazing gig.
Thanks, yeah. It’s gonna be fun.