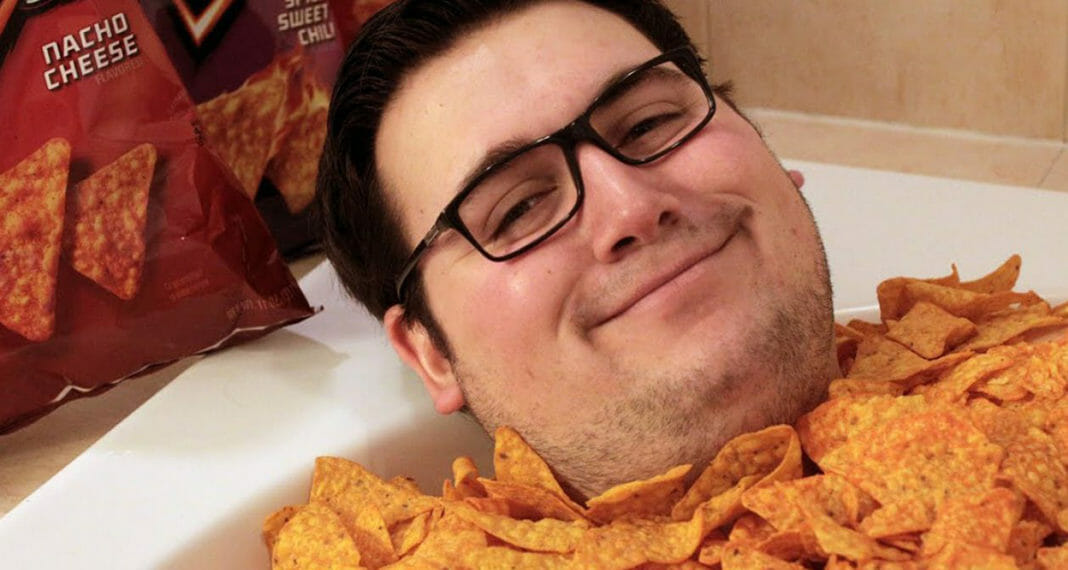 Is there anything better than the age-old pairing of a potato chip and a refreshing beverage? No. I think no.

But which chippie goes with what drink? Huge question. So, I went to the shops, bought a kid’s party mixed bag of chips and made myself sick while reacquainting myself with Burger Rings, Pringles, and Doritos, all in the name of research. On a somewhat related note, if you’d like three-quarters of a kid’s party mixed chippies bag please let me know.

Let’s get into it.

Fun to say, fun to eat—a tasty saucy treat. Smith’s discontinued Toobs in 2015 due to lack of popularity (not sure how they measured that one) and were subsequently met with public outrage (duh). Shane Warne has some strong feelings about Toobs; his description of them is perfection: ‘They’re like a Cheezel but barbeque-type flavour. It’s unique [and there’s] like, special secret herbs and spices in the Toob.’ They were brought back for a limited run in July 2021 as a little treat, but these days you’re more likely to see them on eBay for a gigantic markup. If you manage to get your hands on a packet of Toobs, eat them off your fingers with a tin of Melbourne Bitter—another tangy Australian classic.

In my very scientific research for this article which I conducted via Instagram, cheese twisties won out to chicken 69% to 31% (I did not make this up*) and I am also Team Cheese. I went and bought some chicken twisties to test the theory and the experience was like eating barely seasoned crunchy packing peanuts that got wet and then dried out—but not in a bad way? Twisties of either variety would be a *chef’s kiss* alongside the rosé wine from Dormilona’s most recent release. 100% tempranillo, it tastes exactly like what I would want a naughty cordial to be: pink lolly water, but not too sweet. There’s enough tartness and acid to balance out the candied raspberry. Feels like a party.

The Chip of 2021, these boujee crinkle cuts come from Brittany in France. They’ve popped up in fancy delis and wine shops in a few rather ‘French’ flavours. The general consensus is that Fromage du Jura takes the gold. Fromage du Jura is comté (a hard cow’s milk cheese) which has a very strong flavour. Coupled with the fine crimp—which is far superior to the wider crinkly style imo—these chips are so moreish you’ll eat them until your mouth hurts. Crack a pack with a bottle of chardy from Little Reddie. Made by the thoughtful and talented Pat Underwood, it’s a pretty, slightly salty and wildly refreshing vino, plus the label features a homage to Sonic Youth. Three of my favourite things.

Corn chips and a Paloma, bonus points for a side of Tecate

Corn chips are excellent when you’re a bit dusty. Salty and crunchy, they’re delicious on their own but also really good at transferring dip or guac from container to gob. Personally, I have a deep love for the outrageously expensive circular corn chips from Harris Farm, which are simultaneously not salty enough yet deliciously moreish. Moreover, I think the circle is preferable to the triangle for a dip (or nacho) situation. It feels basic to pair corn chips with a tequila cocktail but I feel like the Paloma is exactly what I want to drink with CCs. Double down with a Tecate rimmed with salt and lime because it’s all about overdoing it at this point.

A post shared by Sandy Coughlin THE BIG BOARD® (@reluctantentertainer)

These are fancy Spanish chips that come in a tin. I wondered if they were, in fact, better than any of the other plain salty chips available. So, I did my due diligence and—yeah. They’re really good. The tin is cute, and the chips are the just-right combo of crunchy, salty and oily. Pretend you’re in Barcelona and have a Muz. Made by two Italian guys in Spain, it’s made from 51 botanicals and it’s bloody delicious over ice with orange and an olive. Vermouth is traditionally drunk a la hora del vermut (at the hour of the vermouth) which, FYI, is midday. Do with that information what you will.

Smiths Salt and Vinegar and Whatever is on Tap

I can’t write about chips without writing about the divisive salt and vinegar. A chip I never much cared for as a child, they’re growing on me now, as an adult with a very mature palate. S&V is best on a crinkle-cut because there’s more surface area for the flavour and it’s the sour, acidic vinegary-ness we’re here for. The kind of chippie that is almost definitely available at the pub, get a packet and a schooner of your choosing. I tested the theory yesterday with a Carlton Draft because they were out of Reschs and I can confirm that it is a tremendously satisfying experience.

A post shared by The King Boo & Lord Beerus (@the_king_boo_and_lord_beerus)

Pretzels are not technically chips, I know, but this is my article, not yours and I will write about what I want. I recently remembered that pretzels are delicious and I have subsequently eaten 2kg of them in the last couple of months. They are salty and delicious and I like to eat them with Babybel cheese for a little snack. By now we all know I love a fizzy wine, and in my professional opinion, the Essential Crisis Pet Nat is the correct fizz to drink with handfuls of pretzels. Made by Owen Latta, it’s 100% sauvignon blanc grapes. Bloody delicious, it tastes like a lemonade icy pole dipped in apple juice, so it’s perfect for summer and being outside.