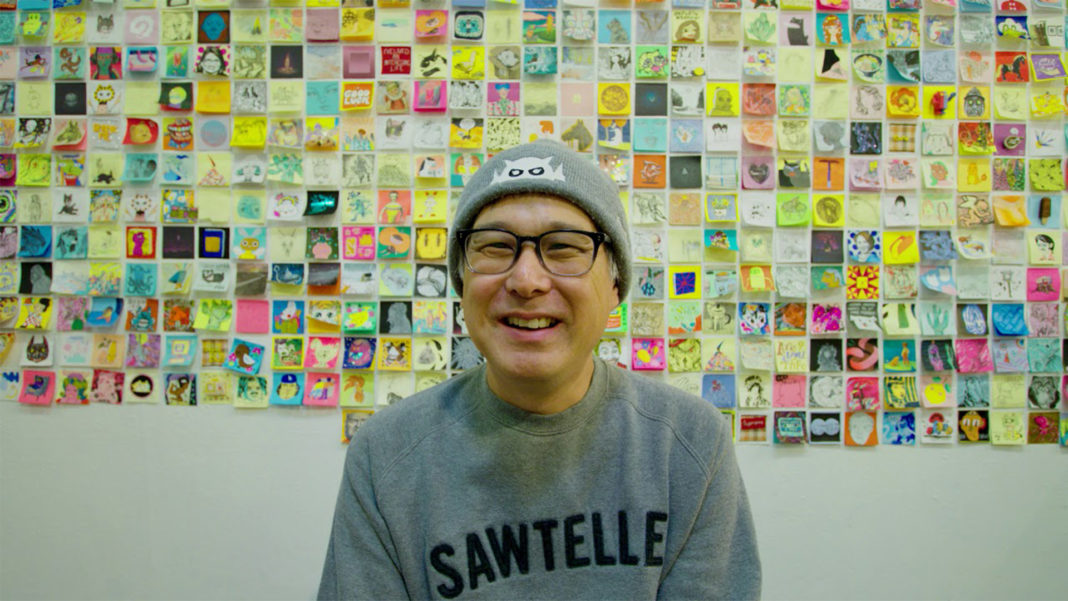 According to Giant Robot lore, one fan flew from New York to Los Angeles to camp outside founder Eric Nakamura’s gallery for three days so that he would be the first attendee of its annual Post-It Show.

Since 2004, the GR2 Art Gallery has maintained that same level of fervour from art enthusiasts who line up to see nearly 1,000 square sticky notes adhered to the gallery walls side by side—no frames or white space in between to separate one tiny illustration from another. From afar, the display is shambolic with splashes of fluorescent blue, orange, and yellow. The frenzy makes more sense from up close: among the sticky gems are bite-sized drawings by pop art all-stars like James Jean, Gary Baseman, Audrey Kawasaki, and Matt Groening. This ‘Lite Brite’ array of rising and established creative geniuses is the closest to the inside of Nakamura’s head that we can get. 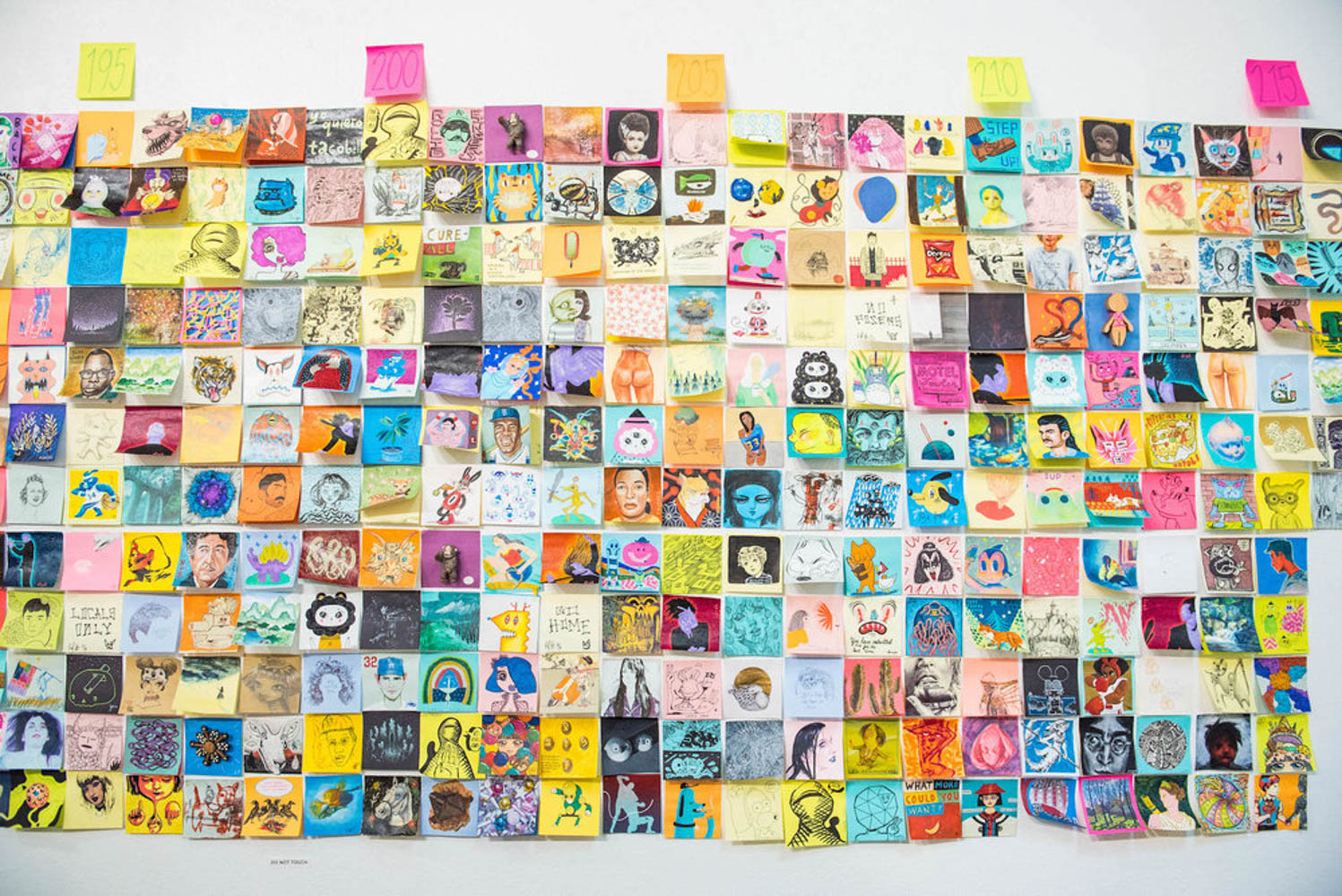 ‘I’m a clutter person, a messy dude,’ says Nakamura, ‘so you walk into the gallery or the main store and it reflects that. That way it leaves people the space to discover things. I love being shown a set amount of things in a space, but discovering things is something I enjoy.’

The Post-It Show, held every December at the GR2 Art Gallery, is a considerably smaller project than what many of the artists typically commit to, but they look forward to having their work on display among art students and emerging talents. Many are repeat Giant Robot exhibitors who have also worked closely with Nakamura over the years. The Giant Robot founder attributes the longevity of his 750 square foot space to all the lifelong friendships he’s built with his favourite artists. 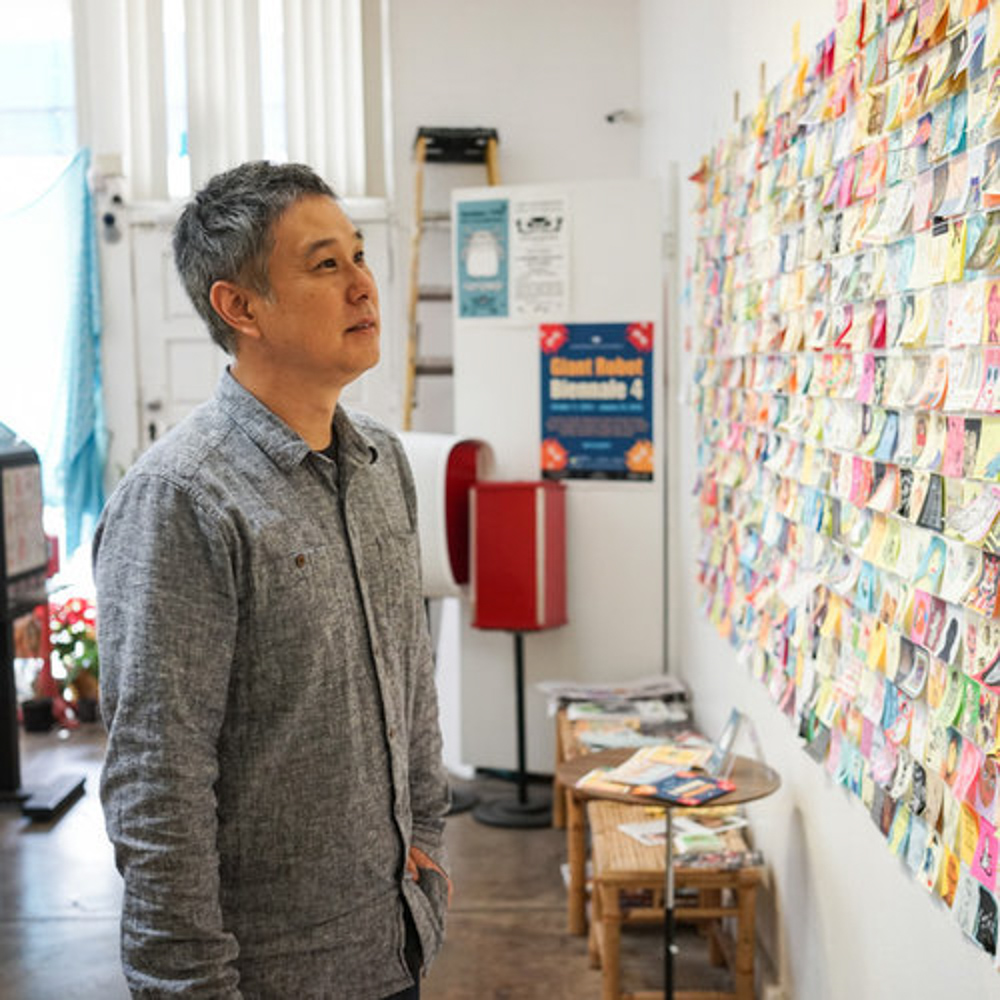 ‘There’s always the liking of a pretty picture, but for me, it’s about finding the artist I can have a personal connection with,’ says Nakamura. ‘It has to be something that I feel comfortable with because, in the end, the plan is a long term relationship so that we grow together,’ Nakamura then laughs, ‘Maybe that should ring true for all relationships in general.’

Giant Robot has transcended generations. Before it was a gallery and pop art store in West Los Angeles, it began in 1994 as a hand-assembled zine humbly distributed across Los Angeles. It covered topics in music, art, technology, food, and life’s ephemera. While it was also a DIY avenue for Nakamura to share what he liked, the zine in effect was one of the first physical publications in the U.S. to feature Asian and Asian American alternative culture, providing space for creative upstarts and cultural issues that were not covered with as much inquiry elsewhere. 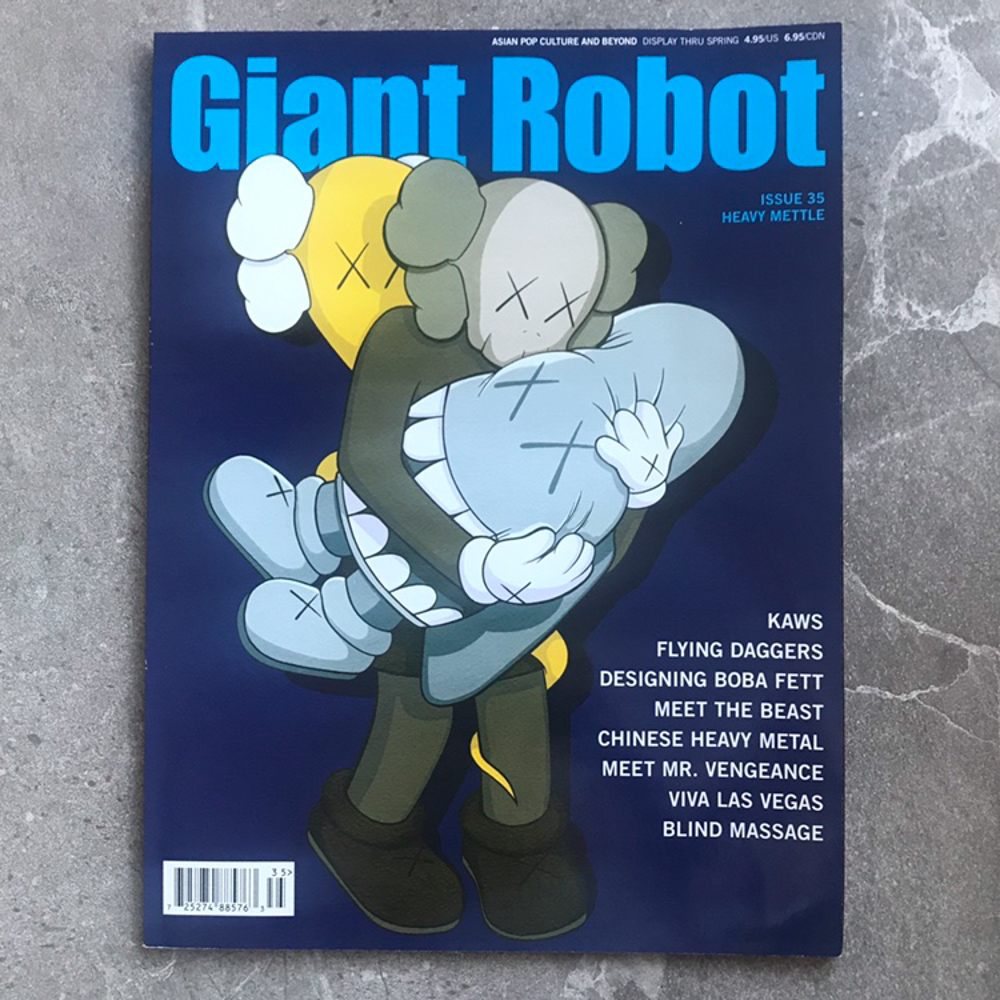 By 2000, Giant Robot reached a worldwide audience, ravenously consumed and collected by art enthusiasts from Tokyo to Mauritania. It was one of the first magazines to feature today’s popular contemporary artists, if not give them a global platform. From artist Takashi Murakami and actress Maggie Cheung to cartoonist Adrian Tomine and prolific psych-rock guitarist Michio Kurihara, Nakamura remained devoted to making every issue a forum to uplift people who would otherwise find difficulty expressing themselves authentically in non-Asian interest outlets. On an organic level, Giant Robot readers understood that all the people and issues who were given two to three-page spreads were a big deal.

Not one to lament the days of print, Nakamura was well on to the next thing by the time Giant Robot ran its last issue in 2011. In 2004, he saw a chance to grow the Giant Robot entity by giving it physical shape as a gallery. He didn’t have an art school background, but he was a fan of what was blossoming in Los Angeles and overseas.

‘I was buying art from small artists in the late ‘90s and I was realizing that there’s such a thing as affordable art,’ says Nakamura. He simultaneously recognised that many emerging artists didn’t have a place to show their work. With a mission to make art more accessible, he opened his first shows in 2003 with illustrator Deth P. Sun, painter and muralist David Choe, and pop artist duo kozyndan. 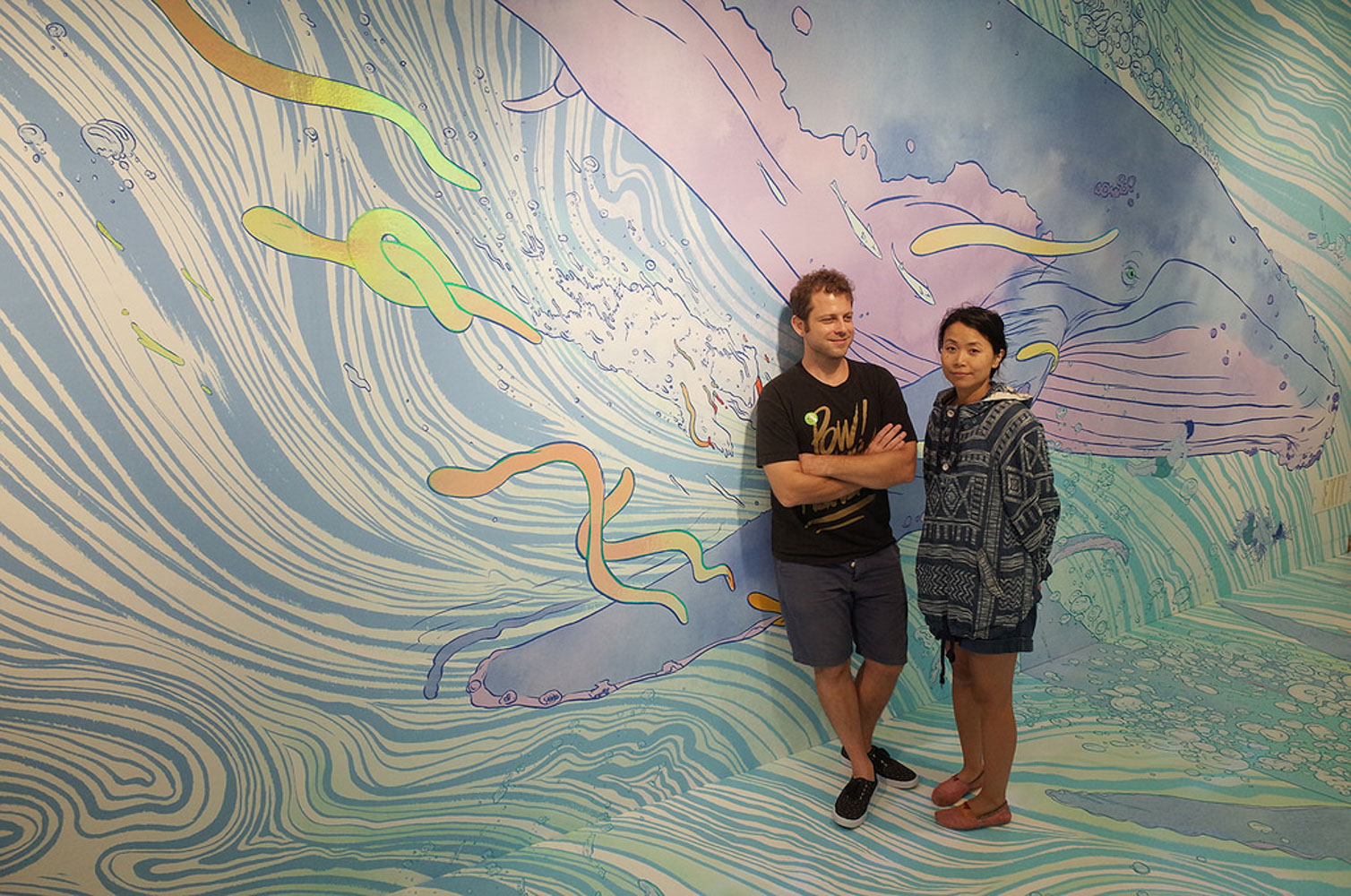 Nakamura tends to be blithe about all the feats that Giant Robot has accomplished in its 28-year run, mostly because he is not an archivist at heart. ‘Me thinking backwards is a weakness,’ he says. ‘I have a hard time thinking of fun, rad things that I’ve done because I’m always going forward. If something rad happens then I think, “That was awesome,” and then I’m on to the next thing.’

If Nakamura won’t say it, the lore of Giant Robot will: his taste and punk approach to curation have been pivotal in making tomorrow’s artists feel important today. Some of his most notable works include collaborating with the Oakland Museum of California on an exhibition of emerging artists, designing a video-game inspired version of the Toyota Scion xb with the automotive manufacturer, and working with Los Angeles’ Japanese American National Museum on a biennale to feature up-and-coming contemporary talent. 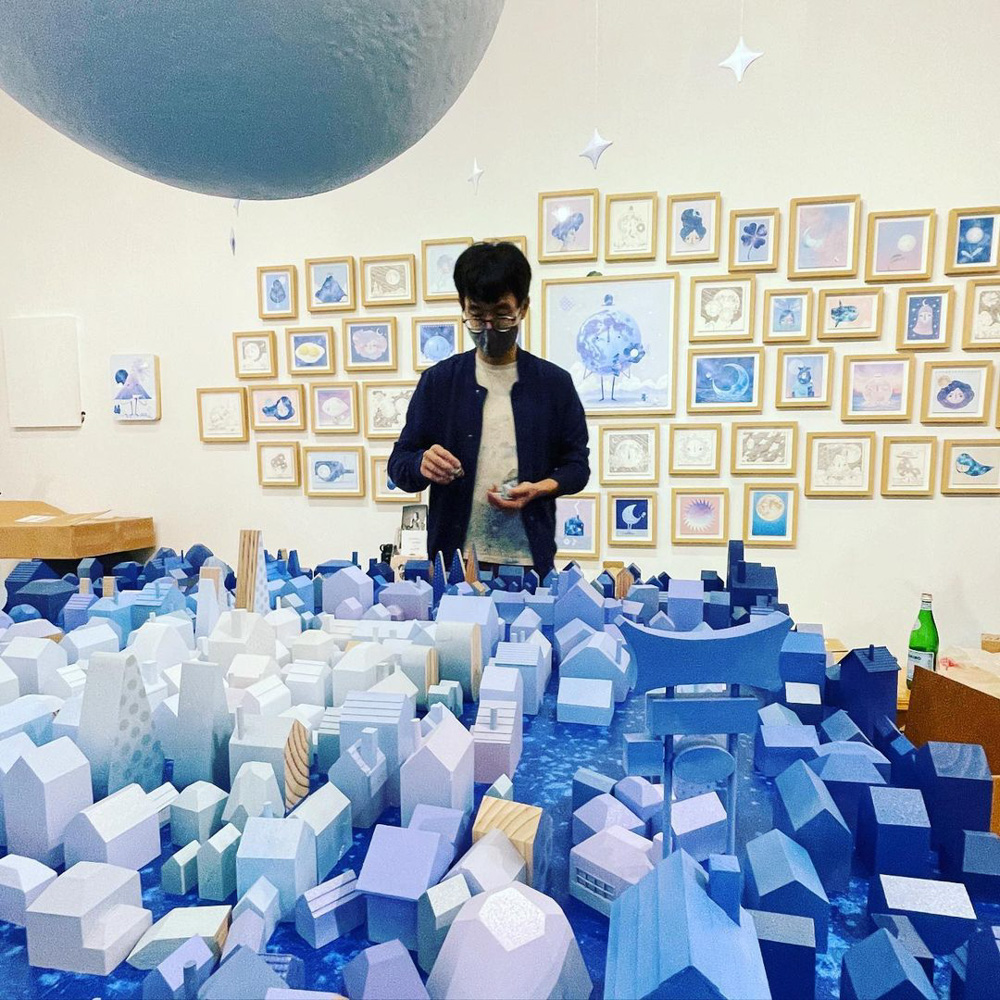 Giant Robot has lived many lives, but even with nearly three decades under his belt, Nakamura says he learned the most in 2021. ‘Right now the gallery and the store are at their best place ever,’ he says. ‘My employees are learning that they have some power and some agency in this. I can say I’ve done it all and know everything, but I’ve learned tons just this year alone, and I’m happy for that.’

Skip the line to see this year’s Post-It Show: for all of December, Giant Robot will run its annual event virtually. And for the art collectors who want to see the Los Angeles space, Nakamura has piles of issues in the store and gallery… somewhere (in true anti-archivist fashion).