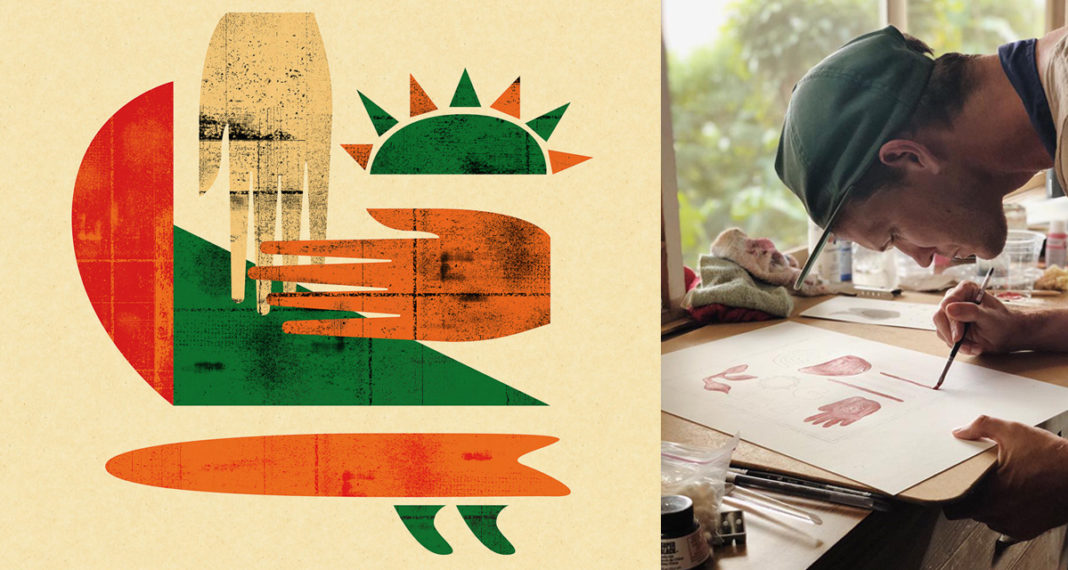 Often in the world of art and design, ‘surf’ is a four-letter word.

A word that conjures images of dolphins and sunsets, seashells and mermaids, or flippant parodies of The Duke posing in front of his board (The Duke as a jumbo garlic shrimp, his board the skewer, or The Duke in sunglasses and a fresh pair of Jordan’s). Artists and designers like Noa Emberson offer a smarter, more dignified aesthetic for the smarter and more dignified surfer. 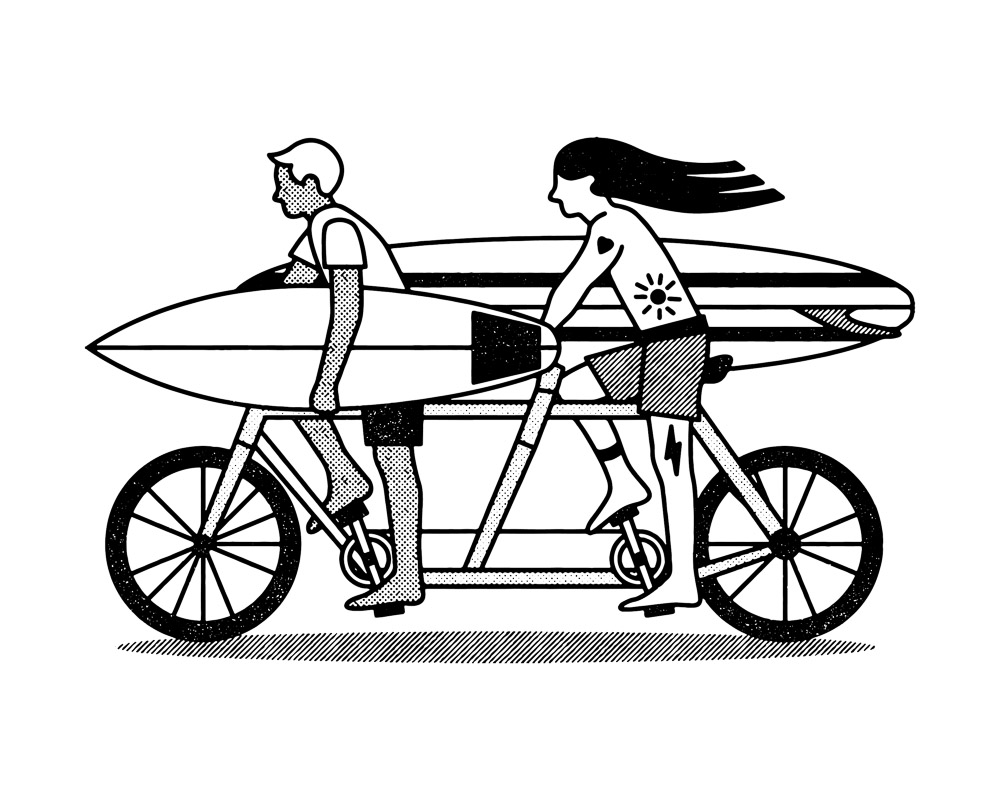 Emberson’s work has been featured in galleries, publications, and platforms around the world, inside and outside of surfing culture, but always distinctly if subtly influenced by the waves. Formerly the art director at Surfing Magazine (rest in peace) where he compiled bold, colorful layouts forever immortalized here, Emberson has founded his own design firm specializing in layout and graphic design through which he has carved out a rightful place for himself within surfing’s niche creative industry, as well as the global field of art and design. 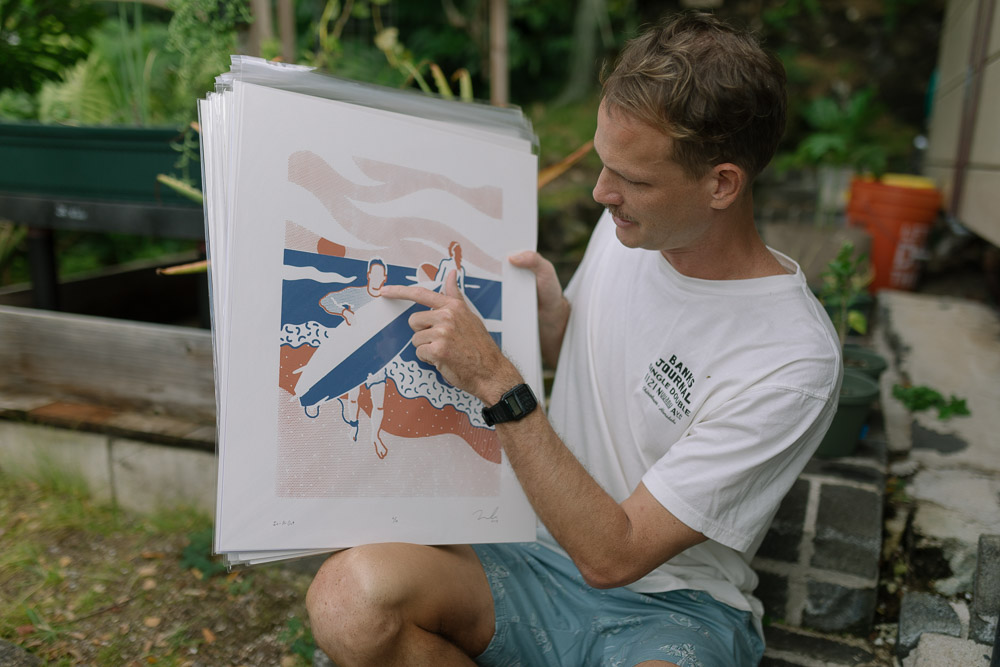 He’s also just got one of my favorite trade names, and after running into him at a party last month, the opportunity arose to formally ask him about it.

Can you talk a little about your name?

Joy Stain. I think that is an incredible name. I am mad I didn’t think of it.

That was born from a senior year UH project where they gave us the option to come up with a name for ourselves. I came up with Joy Stain because of the connotations. You could take it two ways. You could interpret it as lasting happiness—which, you know, more power to you—or you could take it another way if you want. It could be either one you want it to be and it definitely ruffles some feathers. As I get older and older, I still think it’s hilarious. 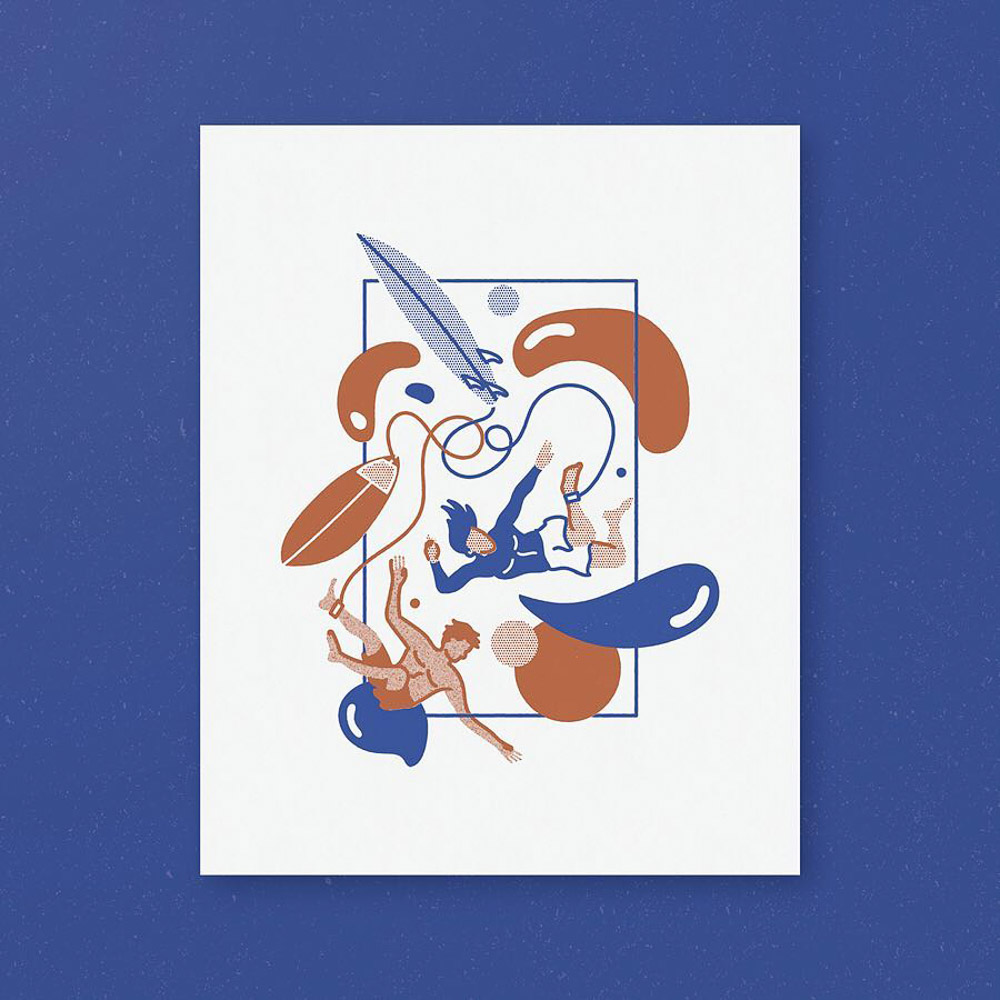 Thank you. I agree, but it’s definitely born out of my 20-year-old brain.

Nope, definitely not that. More than that. Closer to 40 than 30. 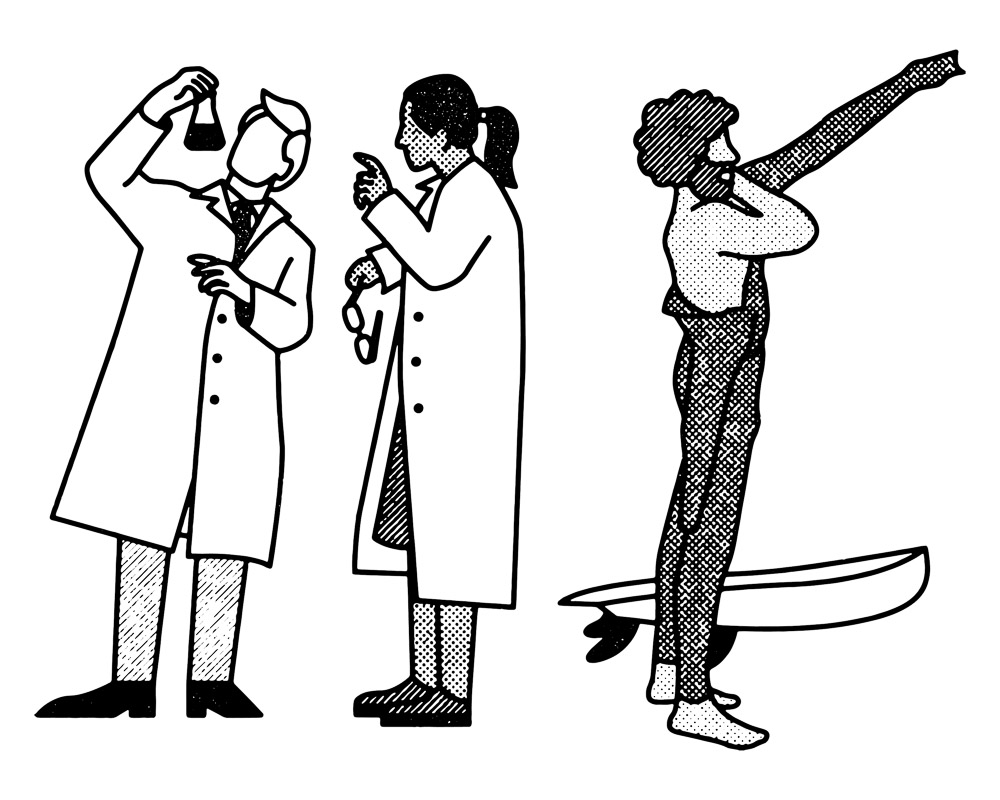 Ahhh you’re like 31, man. I would argue that people like you who have to be working in youthful industries like surfing or art have to maintain their 20-year-old brains.

One hundred percent agreed. You have to be at least knowledgeable about what’s going on in that world. Granted, you should also be aspiring for a timeless creative style. You want to make things that a 65-year-old would appreciate and a 20-year-old would appreciate. That’s the level of work that I’m hoping to make, that would resonate with both, but that’s pretty hard to do. 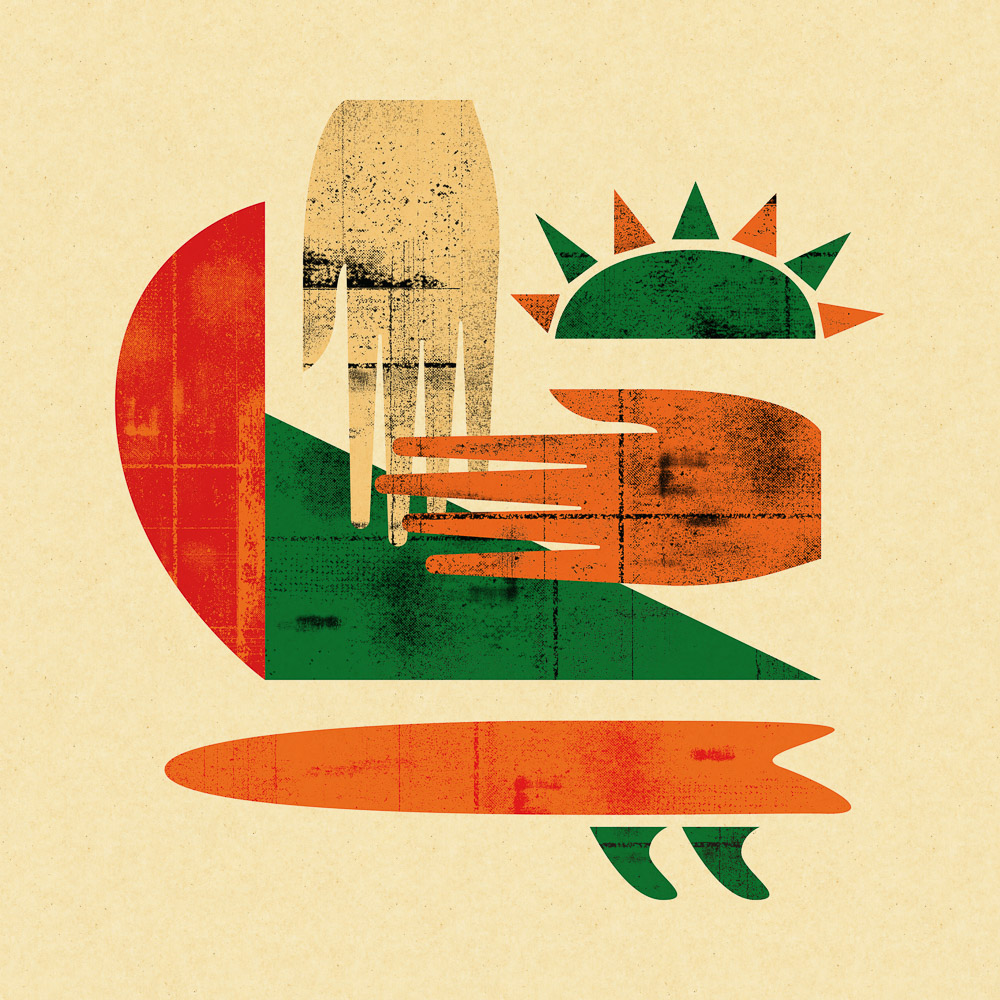 In your illustrations, you work a lot with texture as opposed to color. Can you talk about that?

Yeah, I add texture to most of my work just because I primarily work digitally. My process is digital, but a lot of my work will also live digitally, so I am constantly trying to find ways to make it feel more analog. I’ll scan in textures to use or find textures to bring it away from that clean digital look that I’m not necessarily trying to achieve. When I’m working with more analog mediums or doing printmaking, those textures happen naturally.

Do you have a background in printmaking?

No, I’m a graphic designer first and foremost. When I was in college I took a printmaking course and loved it so much that I thought about switching majors. I like the way it looks and feels and try to tie some of that into my normal digital work. 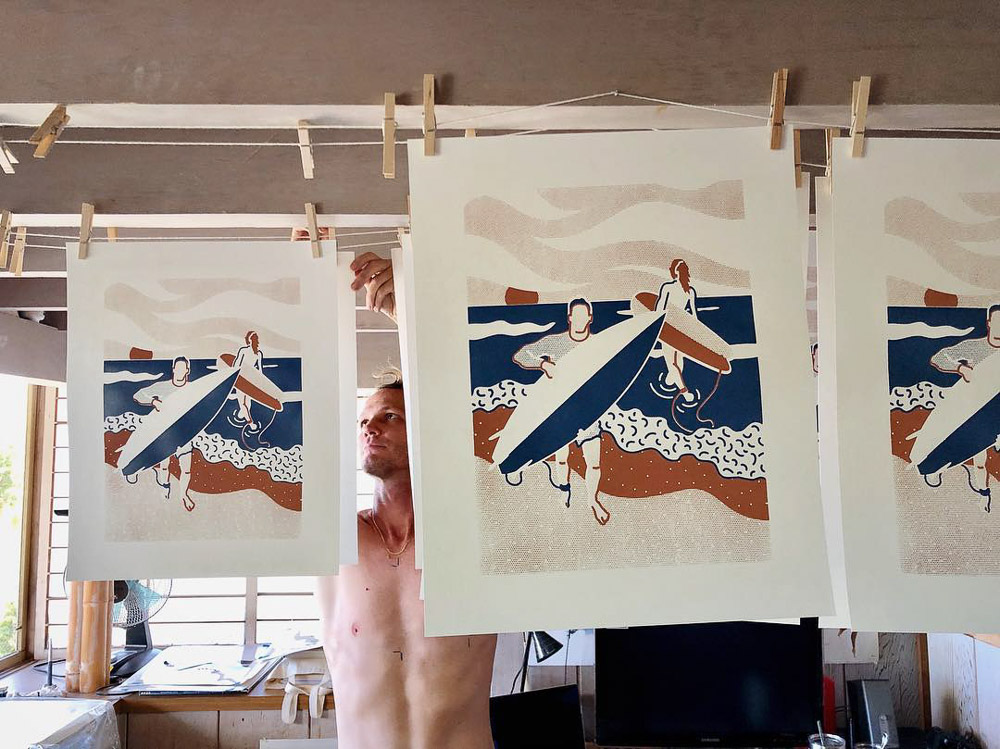 Well your current show at Bas Bookshop in Honolulu, Head In The Clouds, is all screen printed right? How does that process translate?

Yeah, I still do the layouts digitally but with the understanding that I will be printing the work. I’m kind of baking in the mistakes and the textures that I know will occur in the printing process into the planning of my pieces. It’s weird, it’s kind of backward. A lot of the time I think artists are doing analog and trying to figure out how to go digital with it, I kind of have to go the other way.

I don’t know, I think it comes down to efficiency. I work quickest that way. I’m able to get my ideas down quickest in something like InDesign or Illustrator rather than sketching each piece by hand. Plus the nature of my work, a lot of it is pushing around shape rather than sketching line. Especially these new pieces, it was more about combining shapes which is easier to do on the computer because you can sort of just move things around. It’s less drawing and almost more like sculpture. 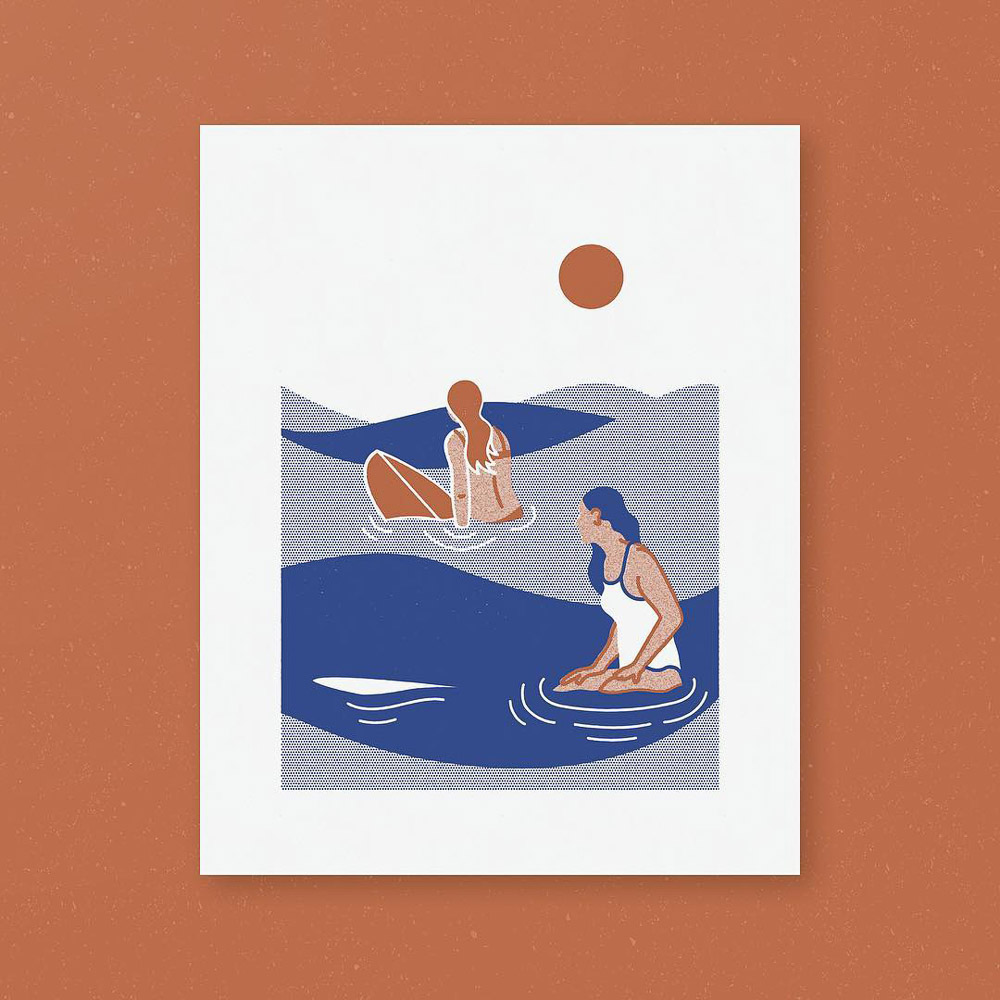 I’m interested in how you started surfing and how that influences your output.

My dad taught me surfing at a pretty early age. We were living on the Big Island at the time. We were living in Puna, and there wasn’t the most surf over there, but Hilo isn’t known for the most waves. I didn’t pick it up fully until I moved to Maui in high school and I fell in with some friends who were obsessed with it. I didn’t start to really pick it up until I was a junior in high school, which is pretty late in life, especially in Hawaii. I decided to go to UH Manoa just because I wanted to keep surfing as much as possible. 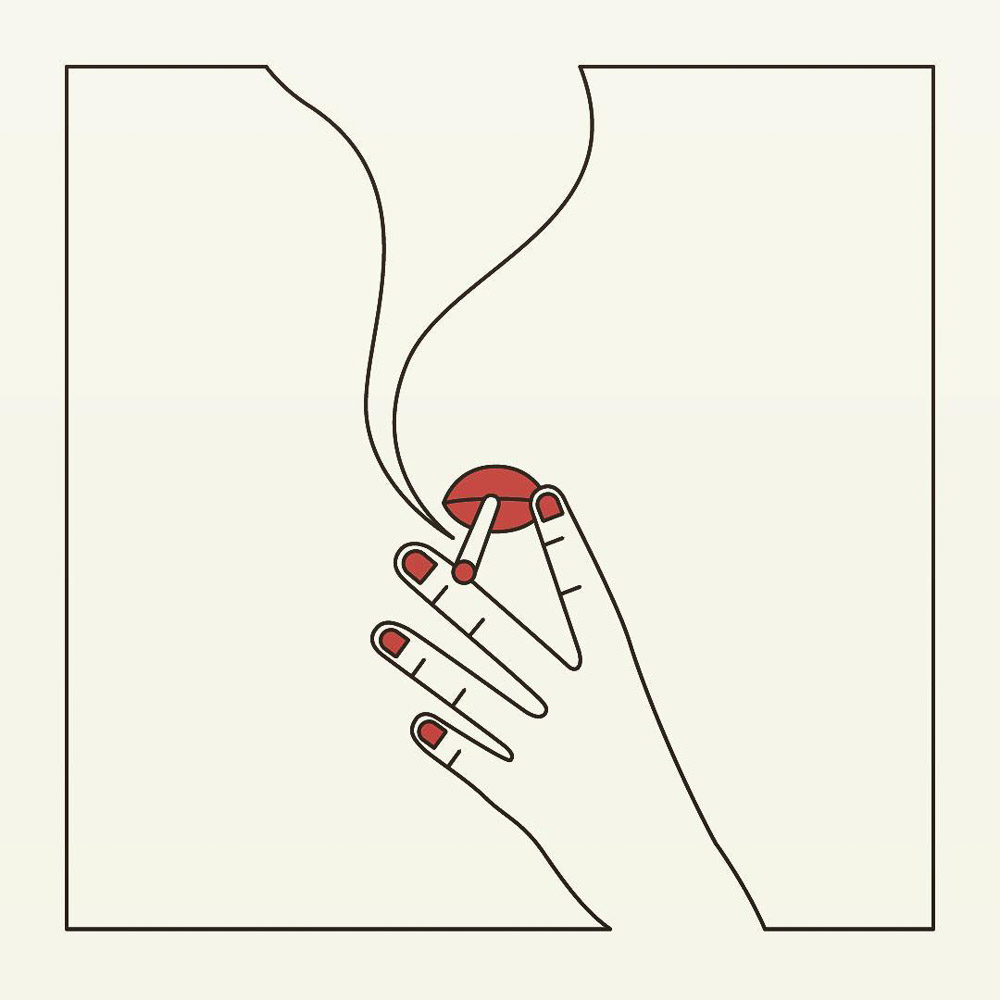 Well, the other question: how and why has surfing influenced your work so strongly?

I think it has to do with me playing with balance and what it is to live a balanced life. No matter what I’m doing, I wish that I was surfing but I don’t really have the most time to do it, mostly because of work. The irony is that I can’t surf because I have to work, but I am working on surfy stuff. I think the frustration of that shows up in a lot of the work I put out. In this most recent body of work, Head In The Clouds, none of it is actually me surfing, it’s just alluding to waves that I am seeing but not actually able to be surfing.

It’s ironic, especially considering how much you work within surfing.

Yeah, I do a lot of work in surfing. I was the art director at Surfing Magazine (RIP) and have been able to make connections and stay within the industry that way. I think it’s just a style that I know well and that I feel is such a big part of my life, it keeps coming up in whatever I make. 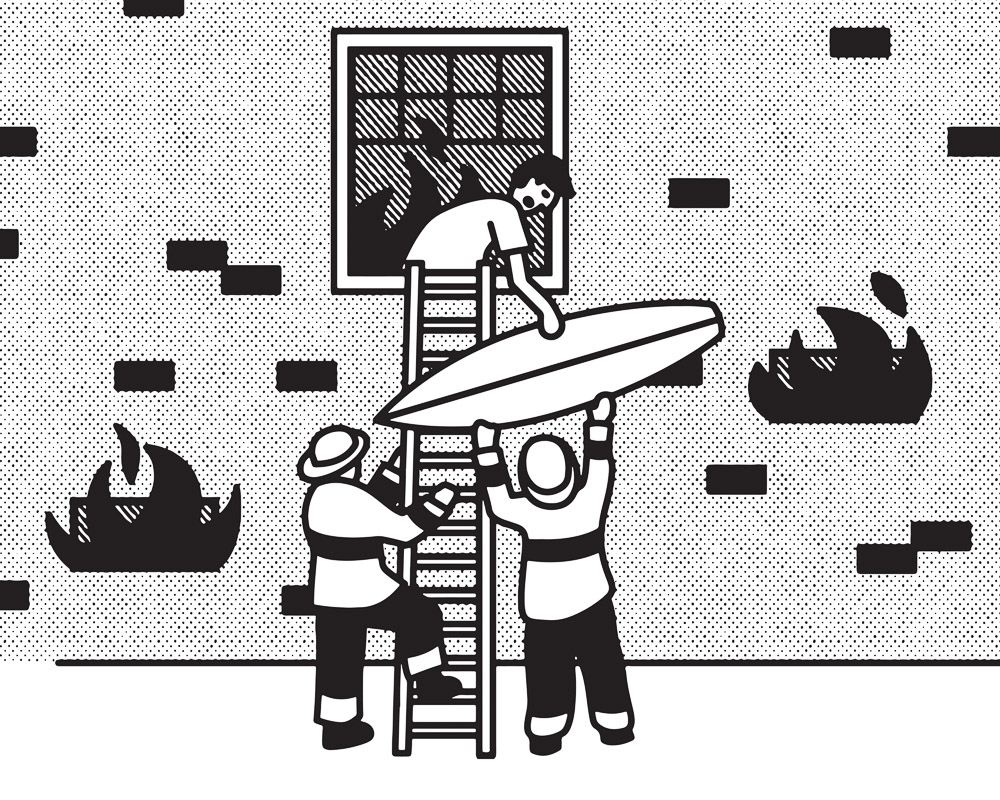 I know some people love it and some people fucking hate it, so I’ll ask you: how do you feel about being categorized as a ‘surf’ artist?

Yeah, I get why they’d feel that way. It gets old, it kind of depends. This week I’m okay with it, next week I might be tired of it. It also comes down to marketability for the work itself. If you want the work to sell here [Hawaii], sometimes you kind of need to lean into that. For example, I have a lot of work at Green Room Gallery, and that is a surf-specific gallery. I don’t really mind it. I will say that this personal work is almost like a side-gig for me, and that I am a graphic designer first, so these illustrations are sort of a creative release for me, and oftentimes I am doing that through the lens of surf-related stuff – whether I’d like to or not. 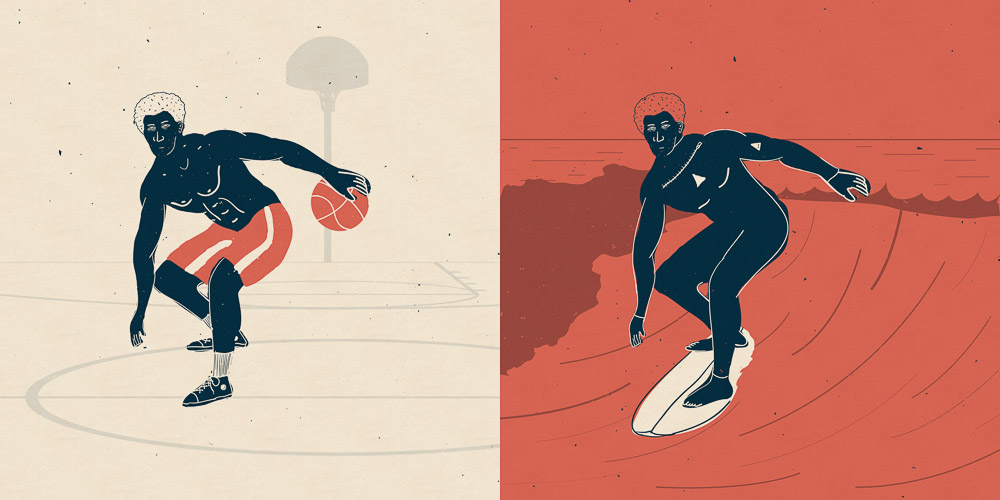 I don’t surf, but I talk a lot of shit about it.

Exactly, thank you. There are certain kinds of negative surfy cliches and connotations that make surfing cheesy. How does one such as yourself avoid the cheese?

It gets pretty tired quick. I get it. I’m always looking at skate culture to find out what’s actually cool, and I would argue that the coolest surfers in the scene also skate and try to live in both worlds. The more granola, sort of Jack Johnson-y—no offense to Jack—there’s a place for them for sure but it isn’t really what interests me. There’s a subculture of surfing that is looking outside of surf and they are the ones doing the coolest stuff. That might have sounded super snobby but it’s more of an aesthetic thing. You get it. 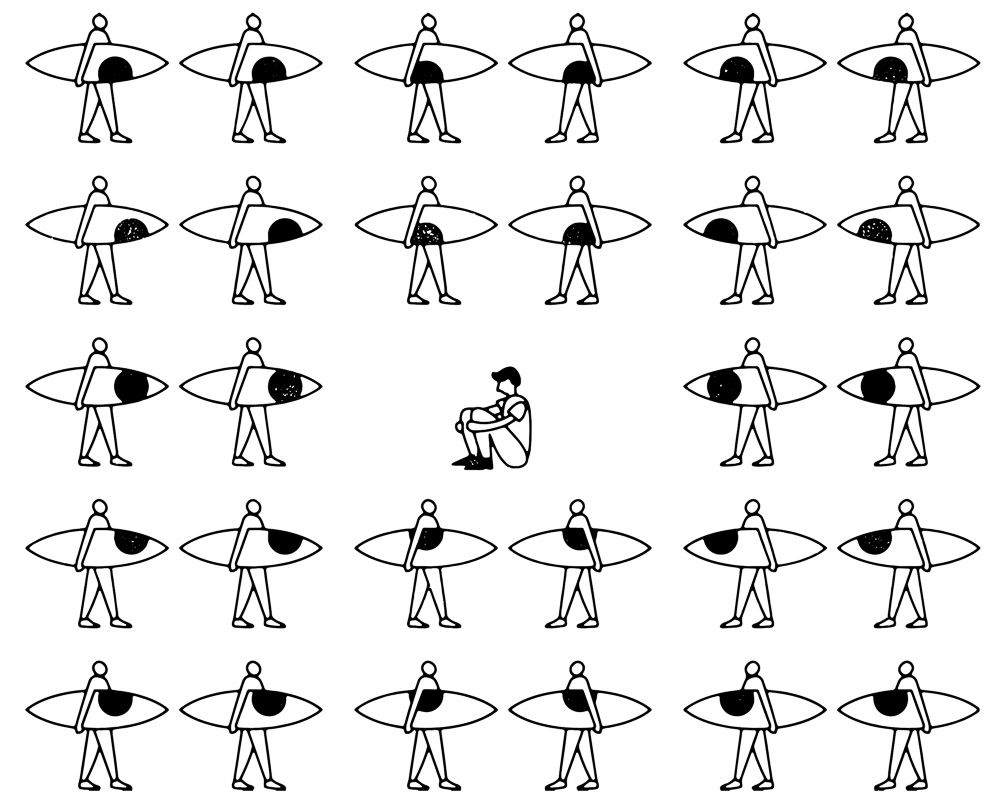 Oh yeah, trust me I get it. What advice would you give to others to access their 20-year-old brains and not fall into cheese?

Like I said, I’d look outside of surfing as much as possible. Often times if you’re a surf artist, you’re interested in getting work at one of the clothing companies so that you can get paid consistently, and that’s totally fair and great. But the ones that I think are doing the most interesting stuff are the ones who are outside of surf, or don’t even come from a surfing background but sort of find themselves in it – they’re doing the freshest stuff, pulling references from all over and bringing it in. It’s so much more interesting than those who started in surf and only ever did surf. You should always try to look outside and try to be diverse because it gets tired quick. 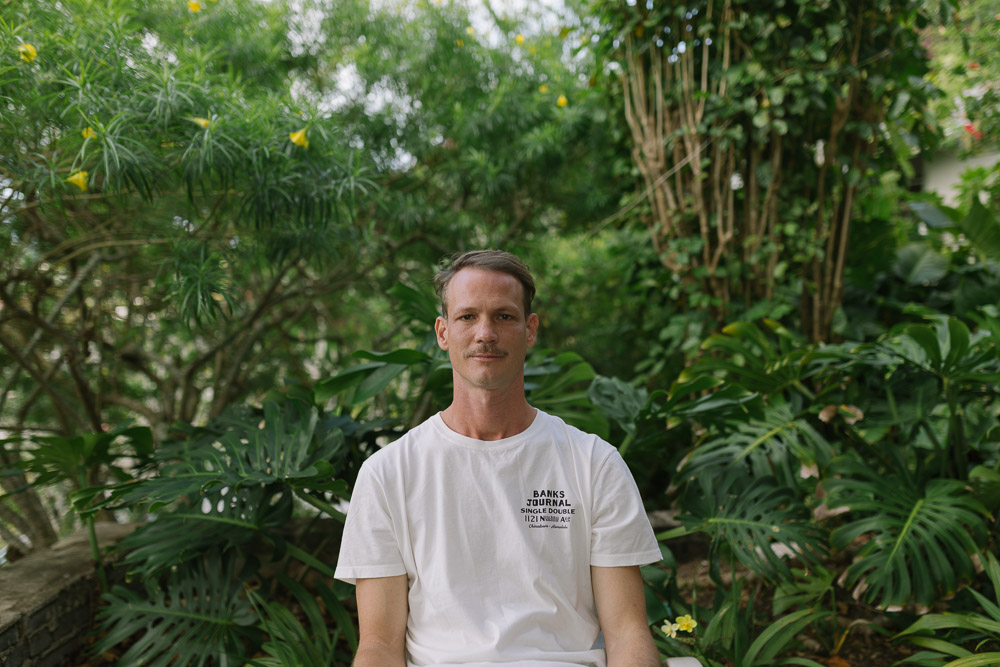