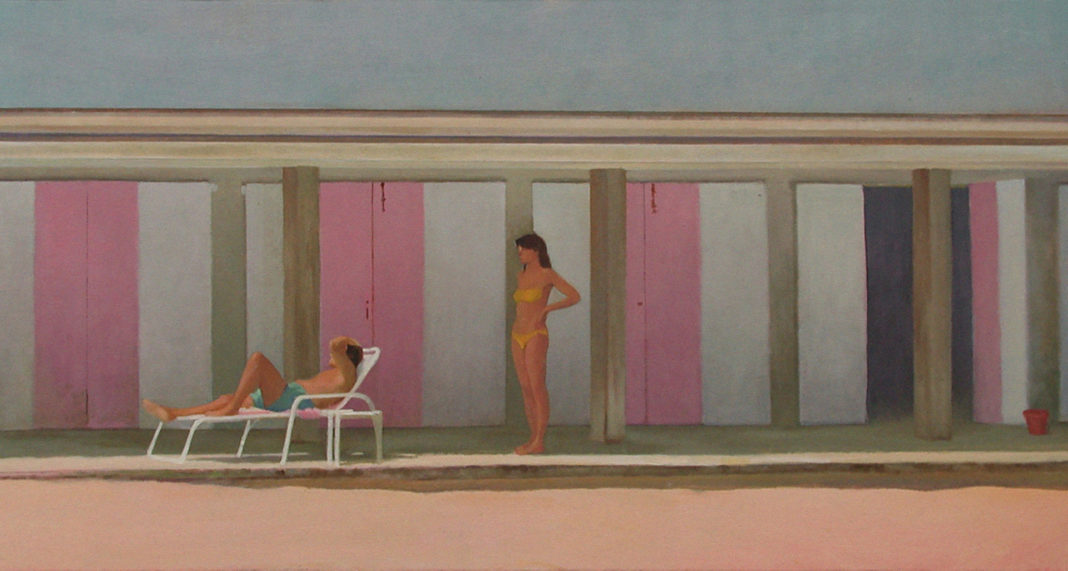 Nigel Van Wieck creates paintings that you want to be in.

I don’t mean you’d like to sit for him and be rendered in oils—I mean you’ll wish you actually existed in the world of his paintings. There’s something about them, a certain quality of light, a nostalgic and seductive dreaminess that you won’t find elsewhere. You don’t admire a Van Wieck painting so much as you bask in it, and we had a chat about that while he rinsed his brushes.

Are you a born New Yorker or did you come from somewhere else?

I was born in the UK and lived in London until my early thirties, and since then I have lived in New York.

I consider myself a New Yorker and New York my home. It inspires me and I never tire of painting it. London was my mother—New York is my lover and muse.

When did you begin painting?

I decided I was going to be a painter when I was ten. My teacher taught me to paint a clear blue sky by wetting a piece of paper and then running a brush loaded with blue paint across the top of the paper. As the blue paint ran down the paper, it diluted becoming white thus creating a realistic sky. For me, it was like magic, and the high I got from that experience was exhilarating. Now I enter my studio every day hoping for that high. The irony is that my art teacher from primary school was brutal, she would slap our legs and it would sting; I did not like her, but she gave me a love for art that has never left, and she gave me a direction in life.

Okay, so you started with painting, but for a minute there you worked in neon, right? What other mediums have you experimented with over the years?

I entered college as a painter and due to the upheavals of the student revolution of the 60s I left as a kinetic artist. In retrospect, the 10 years I worked with light were fortuitous, as it not only taught me about light but also how to make illusions with light and color, which are key to my painting. I believe reality is better when it’s imagined.

So, are the scenes you paint invented or…?

Comparing you to Edward Hopper seems reductive… But I have to because there’s obviously an influence there, right?

I’m often compared to Edward Hopper. Even some of my paintings have been attributed to him, which is a great compliment. There are parallels between our work but there are two kinds of comparisons, the inane and the intelligent.

I get wrongly criticized for being under Hopper’s influence for two reasons: First, because of the single figure in a landscape which we both use. But he wasn’t the first American painter to use that device. In fact, it’s a defining element of American painting. Both Eakins and Homer made iconic images of the single figure in the century before Hopper. Second, because of the loneliness that is in our paintings. Hopper’s work is a reflection of his life. According to Gail Levin’s biography, Hopper had an unhappy marriage, and people who knew the Hoppers describe them as a dour couple. The essence of his work is his unhappiness: art reflecting life.

Is that essence in your case?

In my case, the essence of my work is solitude. I was admitted to the hospital at the age of 18 months and was encased in plaster from head to toe for nearly two years where I experienced my solitude at an early age. I was painting that solitude long before I saw Edward Hopper’s paintings. Nevertheless, Hopper and I have a lot in common; we are both obsessed with painting light. However, I experienced an epiphany when I first saw Vermeer’s paintings and realized he painted light, which I understood because of my work with neon light. Two years later when I arrived in New York, I recognized in Hopper a kindred spirit and was not surprised to read his quote: ‘All I ever wanted to do was to paint sunlight on the side of a house.’

We are both narrative painters who moved to New York and used it as the stage set for our paintings. Our way of composing a painting is similar; we rely on a strong geometric format, and we are both American Realist painters.

We are different in that I leave space for interpretation whereas Hopper does not. He paints loneliness, and I paint solitude; he paints sadness, and I paint contentment. My light is warm and inviting, Hopper’s light is pragmatic in its unhappiness. My solitude is voluntary, his loneliness is ordained. In my work there is eroticism—in Hopper’s, there is very little of it, and when it’s there it’s sour. One would never want to live in an Edward Hopper painting, I hope you do in mine. I’m an optimist, not him.

Although I consider myself an American painter, I have the advantage of seeing America through foreign eyes. I have noticed that foreign people like me see a quintessential America, we see a beauty that Americans take for granted, and portraying this can give a nostalgic quality to the work. I’m aware of this when I look at movies about America made by foreign directors; they have a similar eye to mine.

What is the key to depicting light the way that you do?

Understanding the way the light falls on an object and how that object then reflects the light to other objects.

And based on the number of nude women in your work, is it safe to say that you like nude women?

I paint the female nude because of my school training and tradition. When I went to art school, it was the first time I drew a nude. When I looked at my first effort and compared it to the nudes created by my fellow students, I realized I needed to apply myself and by the end of the year, I was good at it. I also discovered that it was a subject I enjoyed painting. Most of the models in our classes were women, so I learned my craft painting the female nude, and I just continued painting women. There is a tradition in Western Painting of painting the nude. I wanted to paint the nude in a modern context. There is a difference between being nude and being naked, and that contradiction interested me. I saw it as a way to explore relationships and the power within them: who has the power and who does not.

What advice would you give a silly young person considering a move to New York and a career as an artist?

I would say, ‘Come to New York,’ but coming here to be a painter is an old-fashioned concept—the art world has changed. Most art dealers I know in New York complain that nobody comes to their galleries. Major collectors now visit art fairs around the world, turning art dealers into traveling salesmen. The days when a city was the center of the art world are gone. The artworld is now global and art movements mean little. It’s not important whether you’re a Realist, a Conceptualist, or an Abstractionist. Today what’s in fashion and what collectors want are works by certain socially accepted groups no matter their style or where they live. In ten years this will change and it will be something else.  But if you want to look at and study great art, then New York is a great place to be, and the many museums are full of treasures. But this is also true of other major cities.

So, come to New York, then?

Come and enjoy it, it’s an amazing place and chances are you will fall in love with the city.