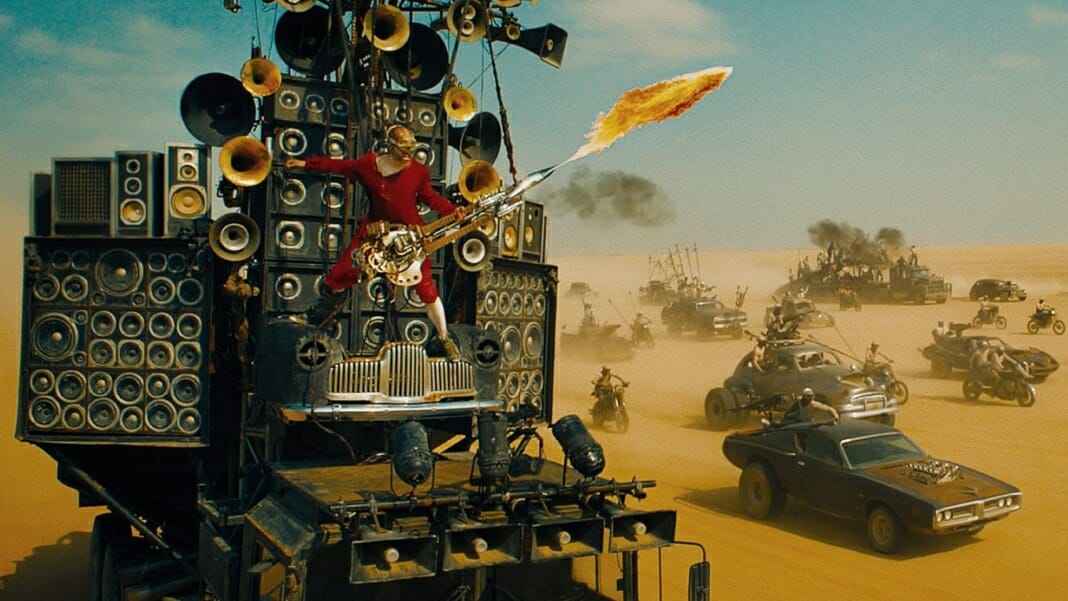 Saving for a house deposit? Forget about it.

There’s a significantly more turbo way to spend your hard-earned inheritance, and it’s by purchasing a fleet of 13 cars from Mad Max: Fury Road this Sunday. Among what’s been dubbed ‘the most iconic vehicle collection ever offered by Lloyds Classic Car Auctions,’ you’ll find the Gigahorse, the Interceptor, the War Rig, and fan favourite, the Doof Wagon. And yes, it comes with the flame-throwing guitar.

Where they have been stored since the post-apocalyptic, six-time Academy Award-winning Australian film wrapped in 2012 is anyone’s guess, and why all thirteen cars have to be sold together is also a question for the war gods. So too is how director George Miller was able to film Fury Road off the back of his previous film, the animated children’s musical, Happy Feet. But amongst all the uncertainty, one thing is clear: whoever wrote the car descriptions for the auction house crushed no less than twenty Monster Energy cans before putting pen to paper.

‘Available for expressions of Madness is a Museum of Modern Masterpieces, these vehicles are survivors of the apocalypse that was the filming of FURY ROAD. Blown, super-turbo charged and armed to the teeth with weaponry and War Boys, the machines that outran the end of civilisation have been unearthed in the greatest barn-find ever recorded. Nitrous, noxious, and no-nonsense harbingers of hell, marking man’s uncanny ability to wring beauty even from that designed for death and destruction, art from power, meaning from machine,’ the anonymous sugar-high scribe says of the collection. 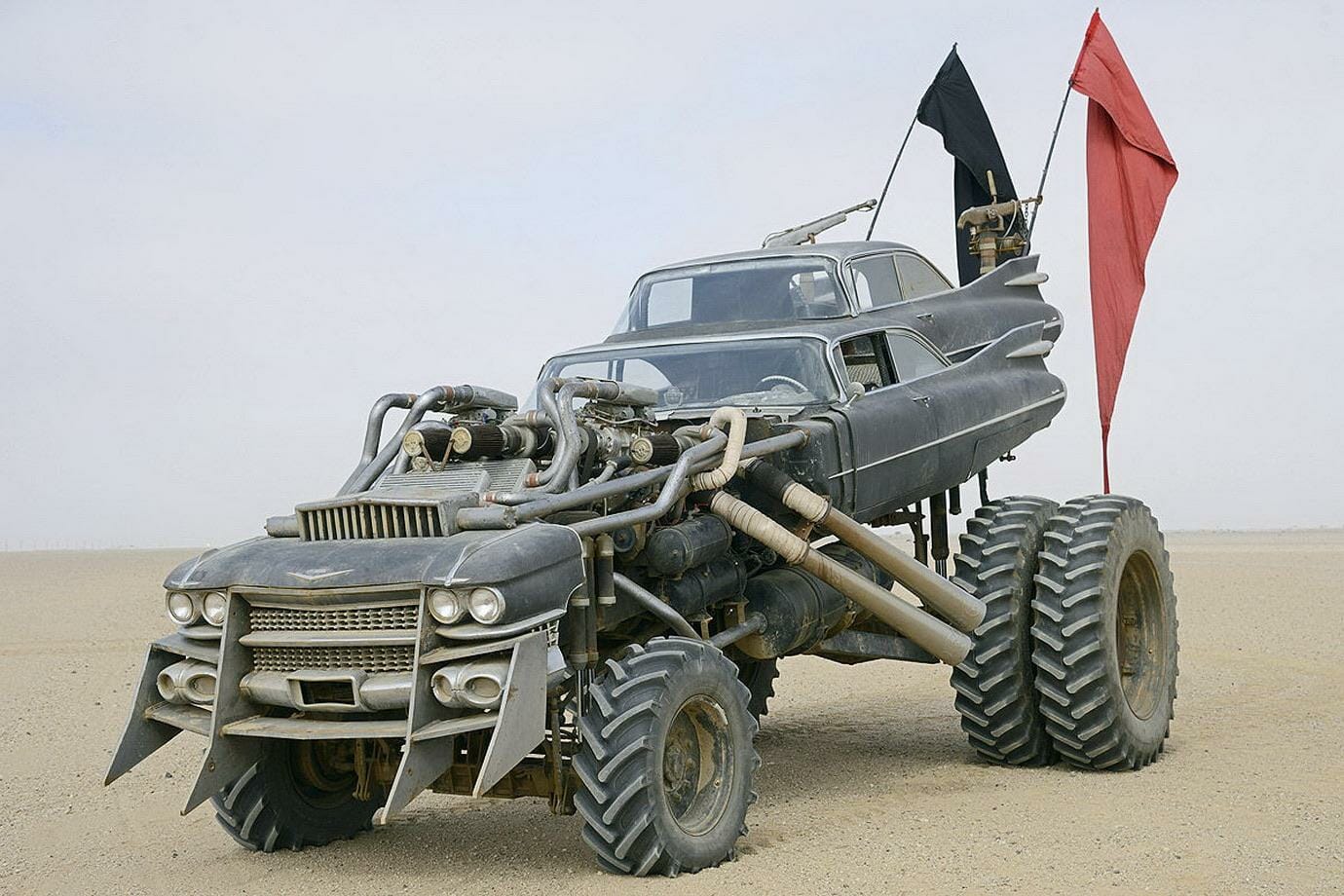 ‘A mutant pair of 1959 Cadillac Coupe de Villes in flagrante delicto are split, widened and mounted one to the other, pitched at a rakish angle by huge double rear wheels and powered by twin V8’s slaved to a handmade gearbox capable of harnessing and harmonizing the ultimate power of the ultimate leader’, our benzoic acid blitzed bard explains of the Gigahorse. 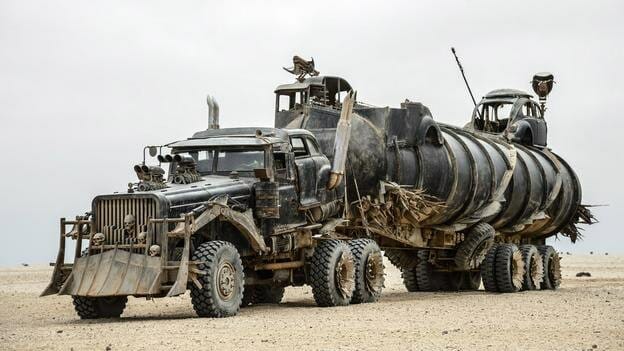 Of the War Rig, which is chased through hell and back throughout the film, we are told to envision a ‘Mutant lovechild of semi-trailer and hot rod, twin V8’s end-to-end, 6 wheel-drive, eighteen-wheeled leviathan charged with the barter of fluids and firearms that binds the three city-states of the Wasteland in tenuous alliance… a beast of war as much a beast of burden, piloted by the most trusted warrior and heralded driver of the Citadel, Furiosa.’

Unsurprisingly, the speaker-stacked beast known as the Doof Wagon gets the most poetic treatment. ‘Every army has a little drummer boy to keep the beat and stir the heart, and the War Boys of the Wasteland are no exception’, Jacked Kerouac fires off. 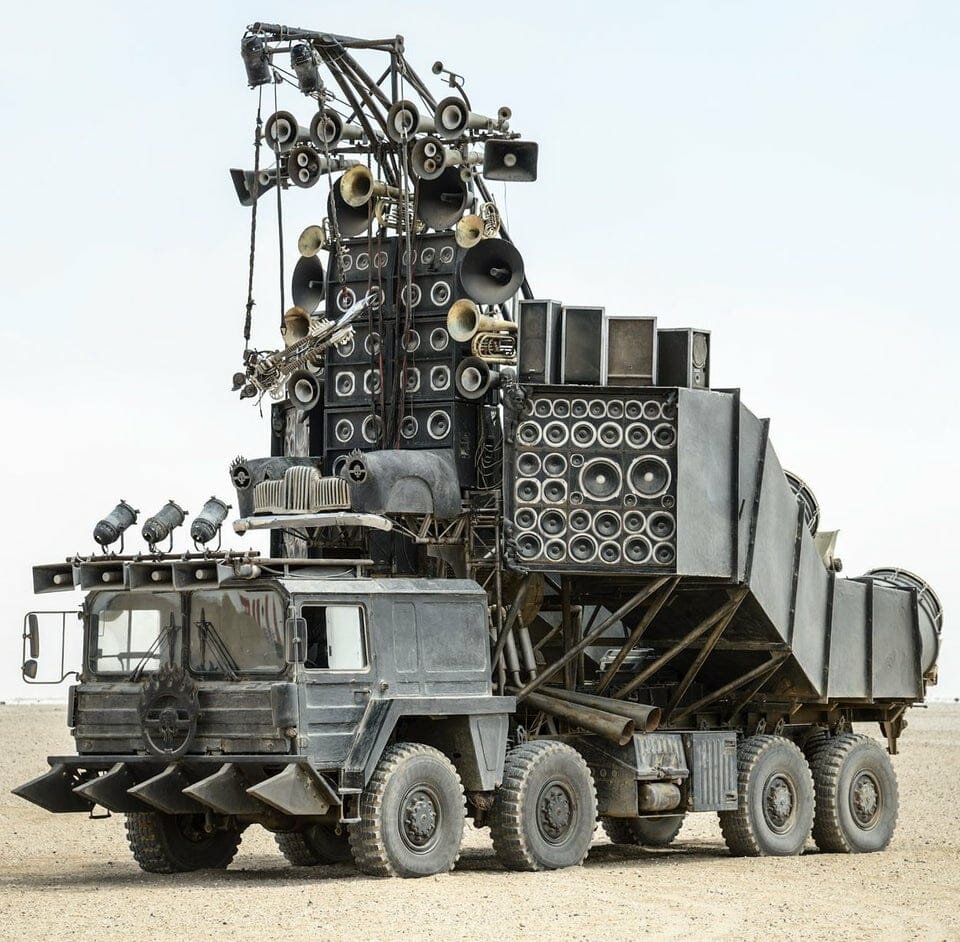 ‘Here, mounted drummers pound a taiko beat on huge resonators built of aircon duct, while Coma The Doof Warrior, blind and disfigured, slung in a web of bungy and spread-eagled before a stack of speakers, hurtles across the desert landscape on a repurposed 8 x 8 M.A.N. missile-carrier.’

Charged Bukowski continues, ‘The wail of the banshee, the distorted lick and demented, driving bass, the call to arms and the baying for blood, all music to the ears and grist to the mill, a symphony, a song, a single scream, the soundtrack to the end of civilization. But we go out dancing…’ Tell me you’ve been to Burning Man without telling me you’ve been to Burning Man.

Jokes aside, it’s a pretty mental lot of metal. The auction takes place this Sunday (26th of September) beginning at 7 PM AEST, and will be live-streamed if you want to get in on the madness. Fittingly, cryptocurrency is accepted.