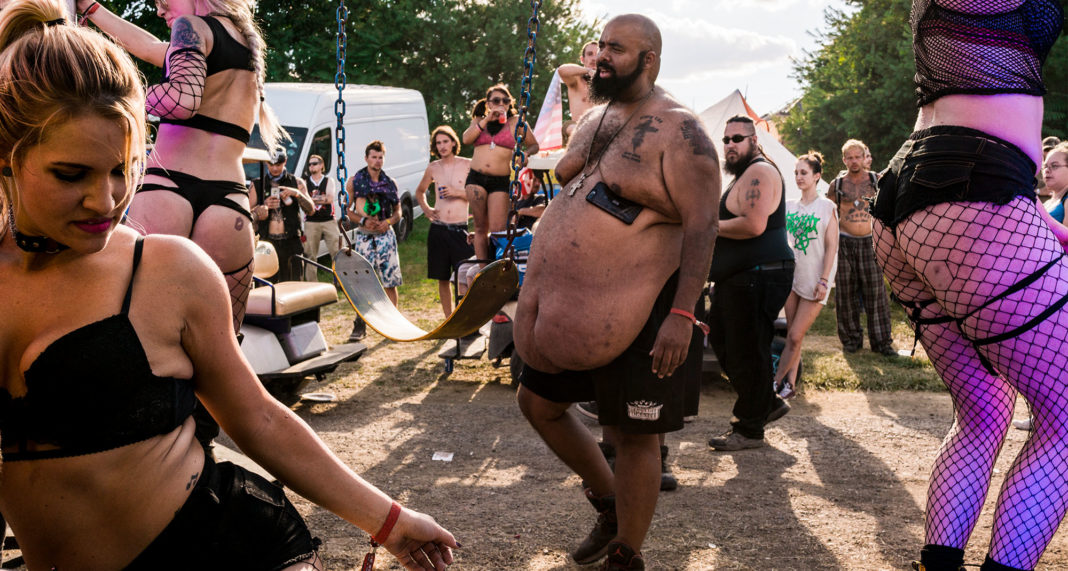 Robert LeBlanc wants you to see the harsh reality of life outside your Instagram feed.

The Montana-born, LA-based photographer has spent the past three years documenting what he calls the ‘real America’—a task which included a six-month trip through the heart of the country—for his soon-to-be-released book, A New America. Snake churches, natural disasters, neon-lit strip clubs, Juggalo festivals, and sidewalks strewn with the homeless and drug-addicted—a gritty look at a country on the cusp of… well, no one really knows.

Like many street photographers before him, LeBlanc finds his biggest inspiration in the work of iconic lensman Robert Frank and his book The Americans, which LeBlanc refers to as his ‘bible’. Robert Frank’s work was groundbreaking in its ability to dig beneath the glossy exterior of 1950s America; similarly, LeBlanc’s A New America aims to give a human face to issues like immigration, drug addiction, homelessness, gun control, racism, and more. I caught up with Robert to find out how skateboarding got him where he is today, the inevitable culture shift, and why ‘stripper lighting’ is the best kind of lighting, below. 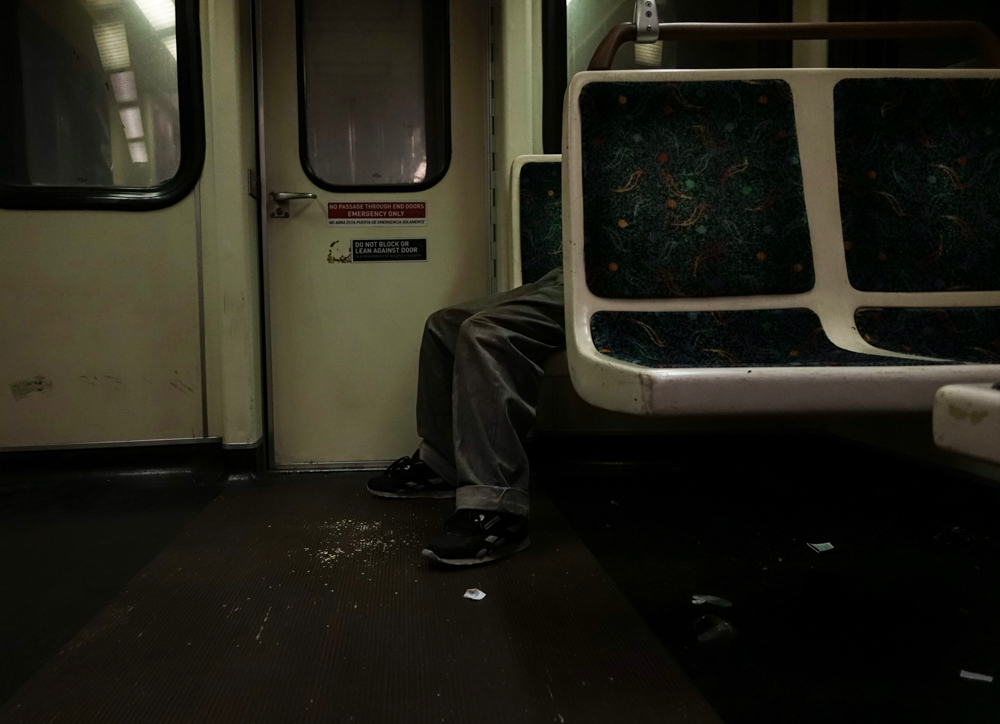 Your work often captures drug addiction and homelessness in America. What do drew you to shooting these issues?

Well, the way I started photography was through skateboarding. Skateboarding saved my life; it’s kind of why I started to like photography. I always used to ride around with a little disposable camera and take photos. We’d spend so much time in the street, and I’d always see wild stuff in the city or late at night. It’d usually just be us, homeless people and drug addicts, so I think it came hand-in-hand. We’d talk to them and have to share the street with them a little bit. I don’t shoot from a subjective perspective; some of the photos seem that way, but I like to take time and talk to these guys or ladies and spend time with them, hear their stories. I dunno, they accept me somehow, and I think that might be because of skateboarding—the walls are down. 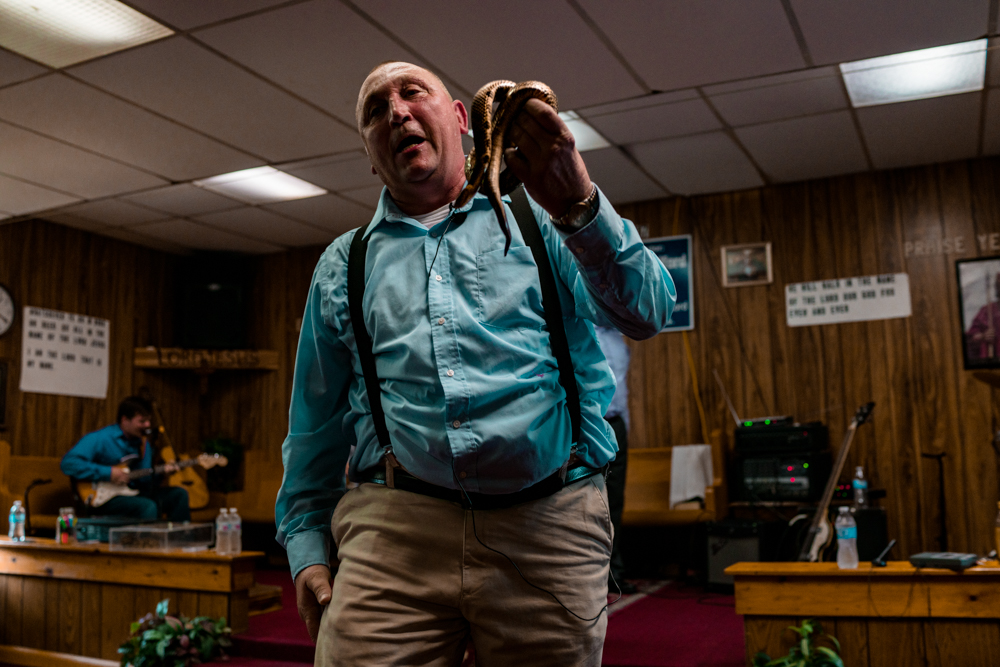 And you did a six-month trip for these photos, which you’re making into a book. Did you start out with a plan or did it evolve when you were on the road?

There were a few things I really wanted to shoot: the lowriders outside of Los Angeles, and a snake church in West Virginia. Besides that, I pretty much winged it. The idea when we did this trip was to just look at at a map and figure out where the closest small town was. Then spend the day or three there, and totally play it by ear. I feel like when you have things really planned out a) it never goes to plan, and b) you miss those things right in front of you because you’re more concerned with what you want to accomplish. 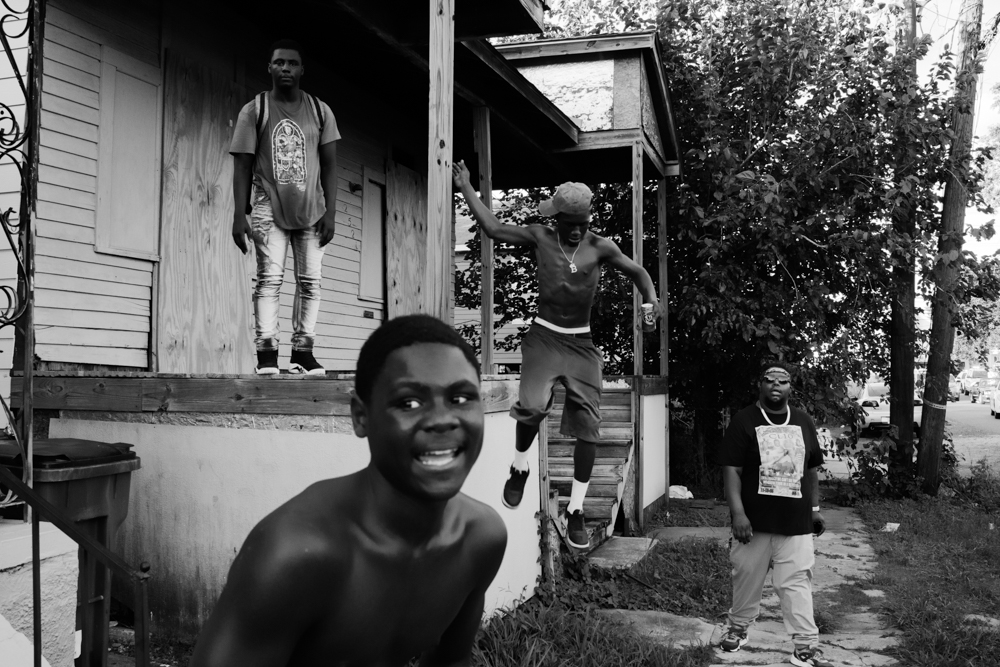 I just wanted to see America as a whole. I think we’re in a really interesting phase in our country. I’m 32, and I remember pre-internet, so I know what it was like to sit by your landline and wait for your friend to call, or to not have a cellphone in your pocket all the time. It’s that old way of living that’s dying off, and with that comes a whole culture shift, so I really wanted to try and capture at least a part of our history in that transition. 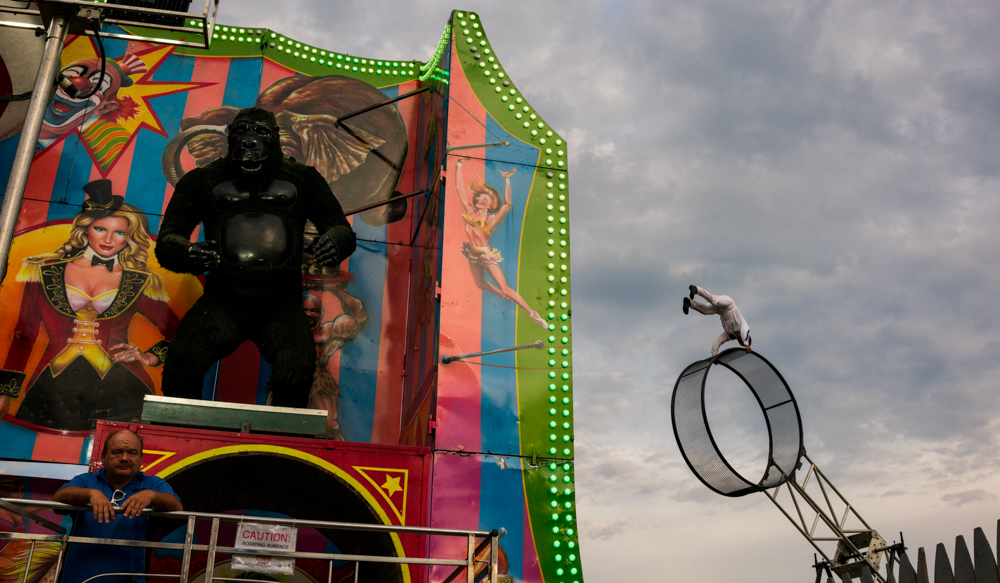 I guess that’s kind of the beauty of putting these photos in a book–there’s a lot of amazing images and it pays to sit down and look through them slowly.

Yeah, having something printed is amazing. Instagram, I’m putting 100% blame on it; I’m guilty of it too, you just flick through things. There’s a lot of Easter eggs in my photos, things that you don’t see when you look at the photos. Even I didn’t see them until I started editing. There’s a circus photo with a guy flying off a circus wheel and a painting of a trapeze artist kind of in the background, mimicking the real version. Then you look down below and–I didn’t even notice–there’s this guy staring at me with a sign that says ‘Caution: Rotating Surfaces Around.’ And you gotta take your time to look at these things ‘cause of you just see it on Instagram, you just see the guy flying around in the air, that’s it. 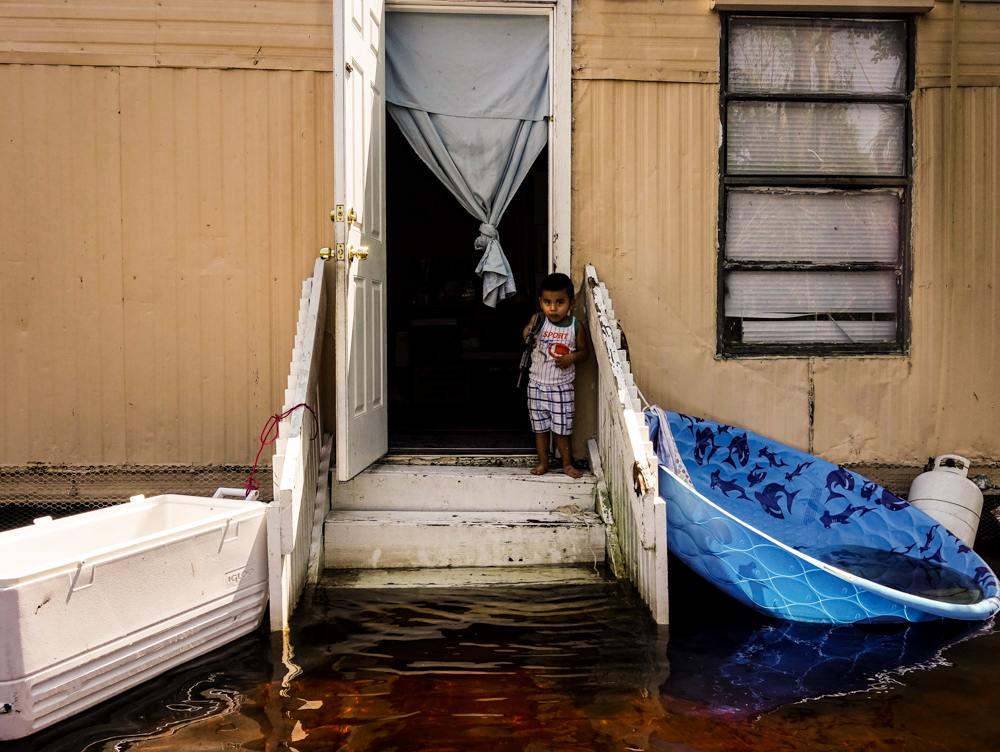 That’s what happened when I looked over your photos a few times. Like your photo of the kid on the stairs, surrounded by a flood—is he holding a gun?

He’s holding a little plastic machine gun. He was totally guarding the house. That was crazy. I shot in Florida during Hurricane Irma, and I went to this small town that was flooded really bad. The locals told me it wasn’t so much the hurricane, but the rain. It rained so much that a lot of the agricultural fields were flooding. A lot of these farms have ways to drain out the water and keep all the plants and fields from going bad. So a lot of that water was run-off from the agricultural fields draining out. They were actually being flooded by people; it wasn’t just the hurricane which was really sad, because why ruin this whole town and community and houses just to save a year’s worth of crops?

On top of that, that town was mostly migrant workers. That kid who was standing on his front porch, that trailer park area was completely flooded and he was just standing on his front porch like he was guarding the house against looters or whatever. I talked to someone else from one of the trailers down the road and he was like, ‘This has been going on for almost ten days and no one has come by to even give us water or anything.’ I feel like that photo captures it really well, because they’re kind of left to their own devices which is really sad. Would there have been a lot of chemicals in the water as well, from that agricultural run-off?

I wouldn’t be surprised if there were some pesticides in the water, but the water was unbelievably disgusting with oil, and a lot of these trailers’ septic systems were flooded out, so there were human feces, garbage everywhere and the water—of course, I’m the only stupid one who was walking through it—had this dark, oily brown tint to it and you could just see all the oil on the top of the water, garbage floating everywhere. The really crazy part of it was that everyone was saying they kept spotting really big snakes and crocodiles in the water. So, I was more scared of one of those coming up on me ‘cause the water was so murky and dark, there’s no way you could’ve seen it coming. 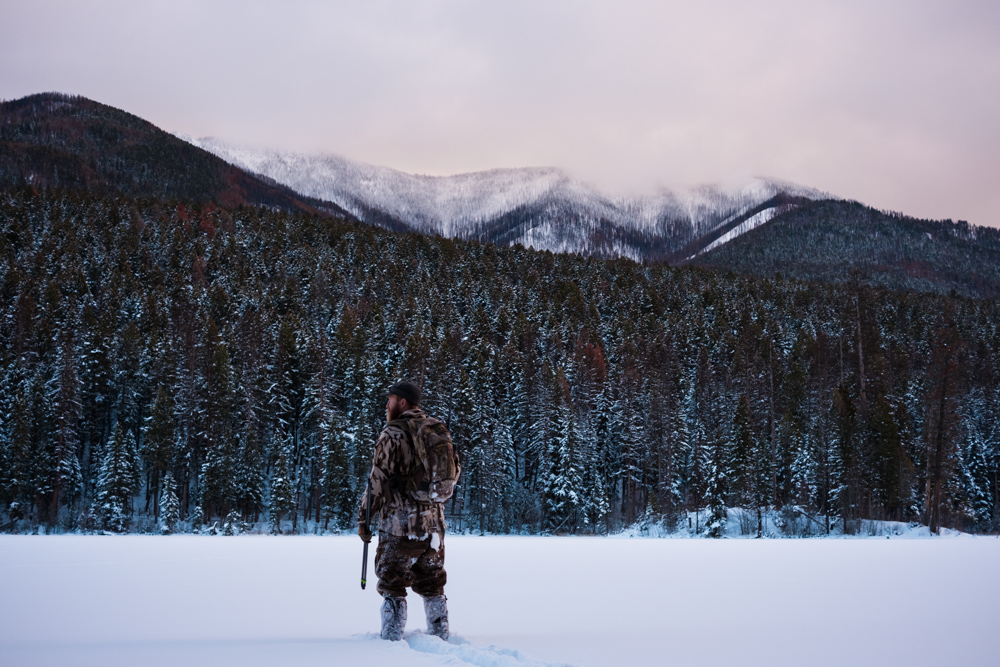 Were there any other sketchy moments during the six months?

We got pretty lucky, but there were a few moments when we were in the 8 Mile district of Detroit, in one of the really rough areas, and I decided to keep my camera in my pocket because a lot of people thought we were there to buy drugs, and once we told them we weren’t they were like, ‘Well what the fuck are you doing here then?’ Besides that everyone was really chill, people would ask why we were in their neighbourhoods and we’d kind of break down that we were shooting this book, that we’re documenting the real America and what’s really going on. And people respect that, instead of just walking around shooting photos and not explaining why you’re there. 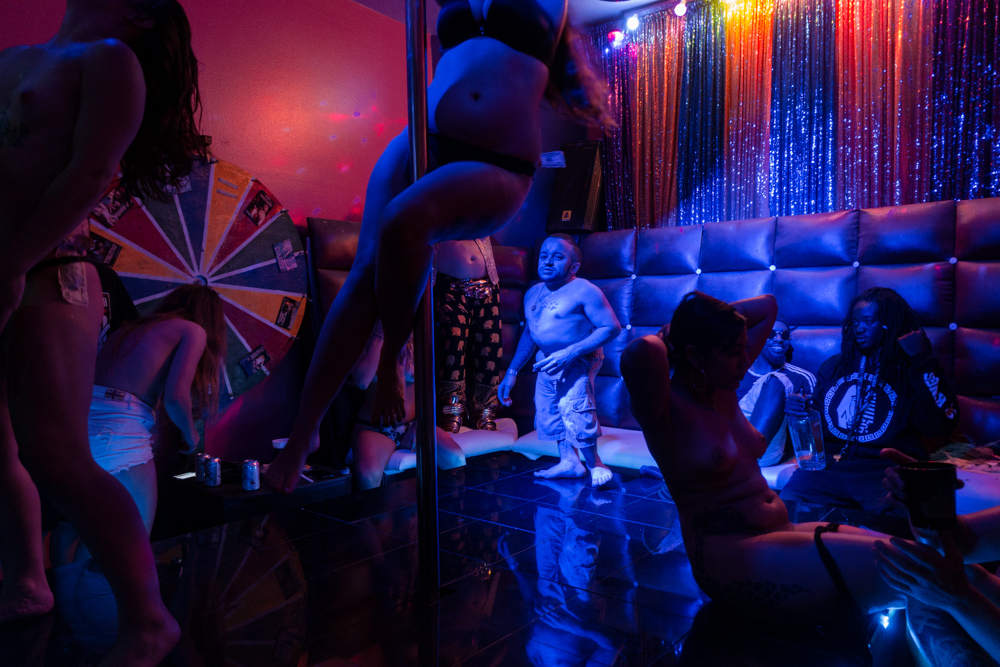 How you’d get access to shoot in the strip clubs?

I met this one DJ named DJ Nneka the Plug; she’s an amazing strip club DJ. We met her in Austin, Texas and she took us to an after-hours club that doesn’t really start going off until two in the morning; everyone heads there after everywhere else shuts down. That was really fun. She gave us the green light, brought us in, talked to the owner, we talked to the owners a bit and got comfortable with it. The girls who were dancing loved it and were having a great time, so we ended up going there for two or three nights. It was really hard for us to leave Austin; we could just keep shooting there all the time. Stripper lighting is my favourite lighting (laughs). Southern strip clubs are really fun, they get pretty crazy.

Did it ever depress you, seeing homelessness, drug addiction and poverty affecting a huge number of Americans?

It’s definitely depressing. For some reason, I’ve always had an attraction to darker things, I think it’s more important to show that stuff. People who want to make their life look fabulous and rich, that doesn’t have any authenticity and it’s not really what’s going on. I think we have this weird perception of wealth and success in America, and it’s not the majority of the country. Once you get out of these major cities, or even in these major cities in the projects—Philadelphia was one place where I was blown away by the poverty; Mississippi and Louisiana where over half the town was abandoned—I think that’s the reality. 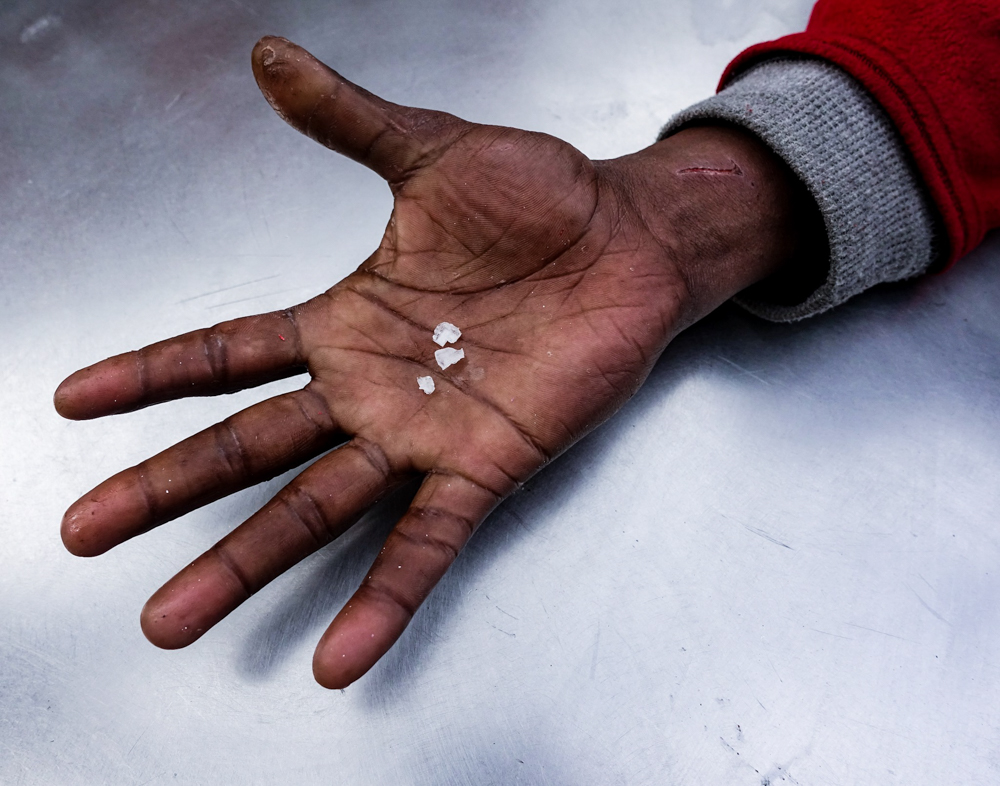 Even though there is this super wealthy side to America and people who like to have their huge yachts and their mansions, there’s a lot of poverty out there and people who are struggling in their 9-5 to make ends meet and keep a roof over their head. So, I feel like if I’m going to show this country in any kind of right light, that’s what I need to show. I wish everyone could be comfortable and happy, but I have to show the real situation so that maybe someone will see one of these photos and feel like they need to do more to help out.

See more from Robert on his website or @photosbyrobertleblanc 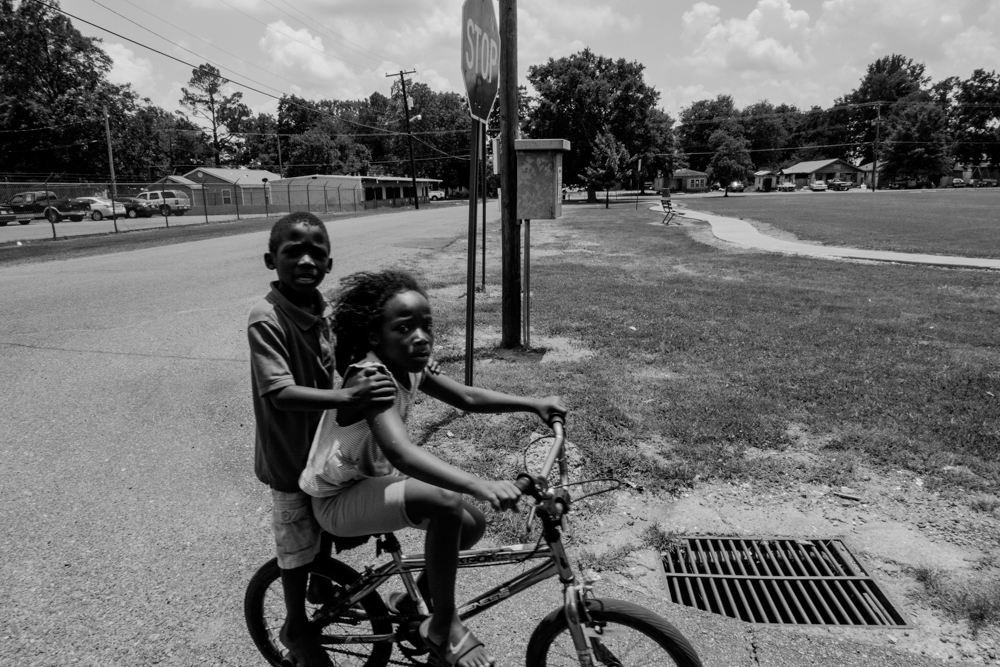