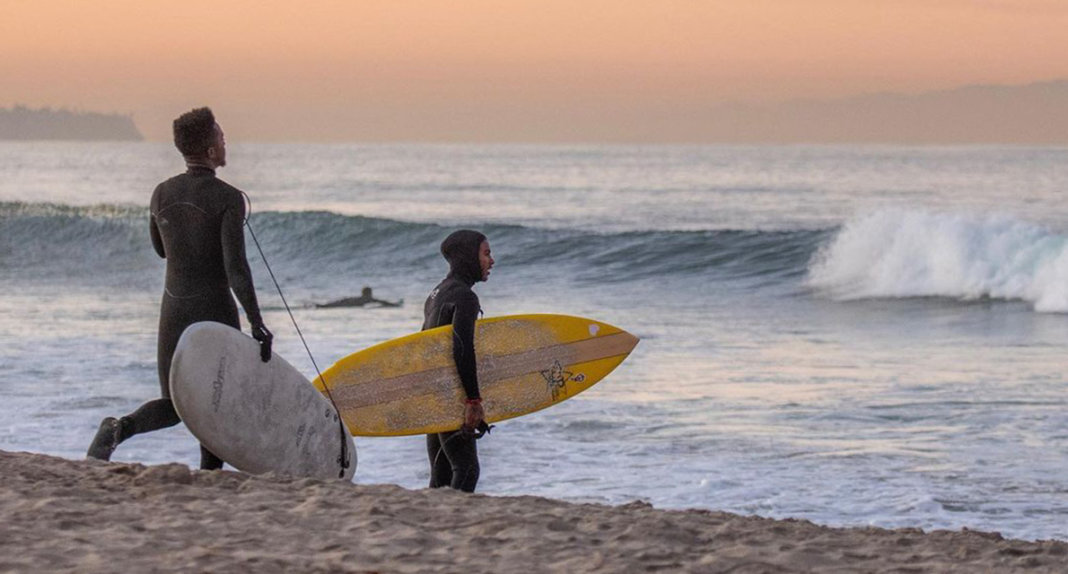 On Sunday, February 21, I attended a paddle out at the Manhattan Beach pier, southwest of downtown Los Angeles.

Paddle outs are traditionally associated with the loss of life. However, this morning’s events took place because of the loss of dignity and respect for fellow human beings.

Black Sand is a surf and art collective founded last year by Justin ‘Brick’ Howze, Gage Crismond, and Tre’lan Michael. Last week, February 15th, Brick and Gage were surfing north of the pier when a group of white teenagers began harassing them, snaking them on waves, and showing disrespect. As the pair were trying to diffuse the situation with the group, an older, white male paddled over, telling them to ‘paddle [north] to El Porto, where you belong. You shouldn’t be here.’ After Brick suggested paddling into shore and speaking man-to-man, the racist stated he would not paddle in with a ‘donkey,’ and called Brick a word that does not need to be repeated here. He then began splashing Brick with water. The entire spectacle was captured by a photographer on the pier, who documented the entire confrontation.

As a result of that experience, the Black Sand Peace Paddle was born. The event was a call-to-action for the entire surf community. The mission: ‘It’s imperative for ALL surfers and humans to contribute to creating a comfortable space for black, Indigenous, and people of color. We must agree to hold our fellow surfers accountable and condemn ALL racist, homophobic, sexist, or hateful speech and/or behaviors.’

If attendance was an indicator, I would say that the paddle out was a success. There were at least one hundred surfers present—women and men, black and white, veterans and novices. In addition to Brick and Gage speaking, they were joined by WSL announcer Sal Masekela, ecoboard shaper Ry Harris, and Color of Water founder David Malana. One major takeaway from their speeches was the fact that no one spoke up on behalf of Brick and Gage on the morning of the 15th. In the words of Masekela, ‘Doing nothing is more of a problem and more aggressive than the words actually being hurtled.’ It is not enough to not be racist; it is necessary to be anti-racist.

‘Skin in the game means: what are you going to do that’s going to make you uncomfortable with those who are familiar with you? When you call out one of your friends, are you ready for them to walk away from you? That is what we are talking about this morning. Until we can bring that kind of energy, where people know when they paddle out at this beach that none of this will be tolerated because they will be called out by their own, that is when we are going to make a difference in this culture,’ Masekela continued.

The behavior that occurred at the pier last week was disgusting. The white surfing community needs to address the issue of racism in the culture from the top down. Personally, I recognize that this is not just an issue at one of LA County’s most popular beachbreaks. However, it took the courage of two men to organize a gathering of the community to bring awareness to a problem we all know is there. And for that, I was proud to be there to witness it. It is imperative that we learn to intervene when we see something that is not right. This is universal, not just specifically in terms of surfing. Doing this on an everyday basis will help show solidarity in fights against injustice.