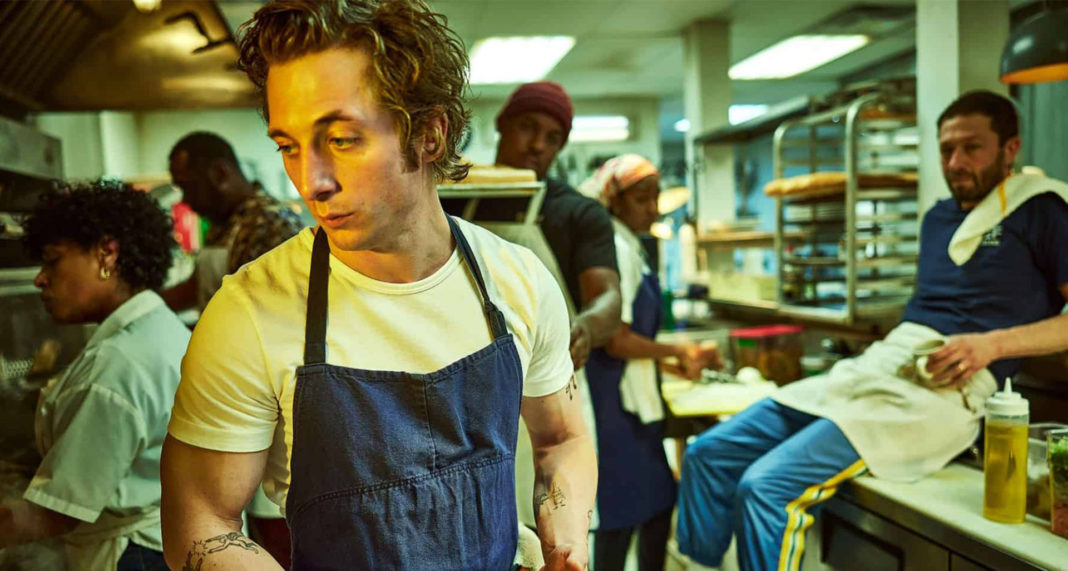 August is here and you know what that means: more film and TV to fill the void.

So rustle up your former flatmates’ streaming logins, a decent VPN blocker (if you’re in Aus), and a couple bags of chips, because the couch is looking pretty good from here on out.

Beautiful Boy—a film adaptation about a father desperately trying to save his son from the grips of meth addiction—was the first time I realised Steve Carrell was way more talented than just deadpan gags. And he’s proving it again in The Patient, a psychological thriller where he plays therapist Alan Strauss, who’s being held prisoner by one of his patients—a patient who’s also a serial killer and needs help curbing his homicidal urges, or else he’s promised to take them out on our boy Steve. High stakes. Watch the trailer and good luck sleeping after this one.

For all the OG Shameless fans out there: Lip is all grown up, and he’s running the family’s sandwich shop in Chicago. In The Bear, Jeremy Allen White is Carmen ‘Carmy’ Berzatto, an established chef who returns home in the wake of his brother’s death. Waiting for him is a headstrong kitchen crew and the reality of his new life away from fine dining establishments, and at the family joint The Original Beef of Chicagoland. Grim. If you were a fan of basically anything ever penned by the late Anthony Bourdain, you’ll be into this.

If you haven’t already watched Season 1 of Sterlin Harjo and Taika Waititi’s Reservation Dogs, go do that before you queue up the brand new episodes beaming straight outta Oklahoma. The series follows four Indigenous teenagers in rural Oklahoma who steal, rob and save in the hopes of one day getting to the mysterious and faraway land of California, and if its first season was anything to go by, the next installment is going to be brilliant. Described as a ‘stereotype-smashing, Tarantino-esque triumph’, this coming-of-age story has Waititi’s fingerprints all over it, so if you were into his past films Boy and Hunt for the Wilderpeople, this’ll be right up your alley.

In terms of a comprehensive overview of the huge dumpster fire that was Woodstock ’99, I’d first recommend watching the HBO documentary film released late last year (literally named Woodstock ’99). If you’re without an HBO login, or if you’re someone who prefers to watch documentaries in multiple-episode formats, try Netflix’s version of events in Trainwreck: Woodstock ’99. The featured interviews and format are different from HBO’s, but they both tell the same story: of one of the most hate-fuelled, testosterone-riddled shitfights in music festival history. What was meant to be a recreation of the original Woodstock’s ‘peace and love’ ethos was never going to happen at an air force base venue with a lineup that featured Limp Bizkit, Insane Clown Posse, DMX and more, soaring temperatures, prohibitively expensive food and bottles of water, and thousands of white frat boys on standby for any reason to destroy shit. A festival marred by hate, sexual assaults and violence, Woodstock ’99 was also a fascinating snapshot into the state of America before the turn of the millennium, so music history buffs check it out on Netflix.

Hollywood is no stranger to ripping a story from the news headlines and turning it into a multi-million-dollar yawn fest… but this actually looks worth watching. Somewhere deep in the corridors of your mind, you’ll remember the news that dominated the Earth’s attention before the c-word came to ruin our lives for a couple years—that of a junior Thai football team that went into some tourist caves with their coach and were trapped by floodwaters. What followed was one of the most dramatic, nailbiting rescue missions featuring an international team of navy seals, unorthodox methods and some weird cameo from Elon Musk (because, who else?) calling one of the brave heroes a ‘paedo’ on Twitter, and now you can watch it all unfold on the big screen. If you don’t mind going into a film already knowing how it pans out, you should give Thirteen Lives a try—it’s directed by the award-winning Ron Howard and stars Colin Farrell, Viggo Mortensen, Joel Edgerton and more.