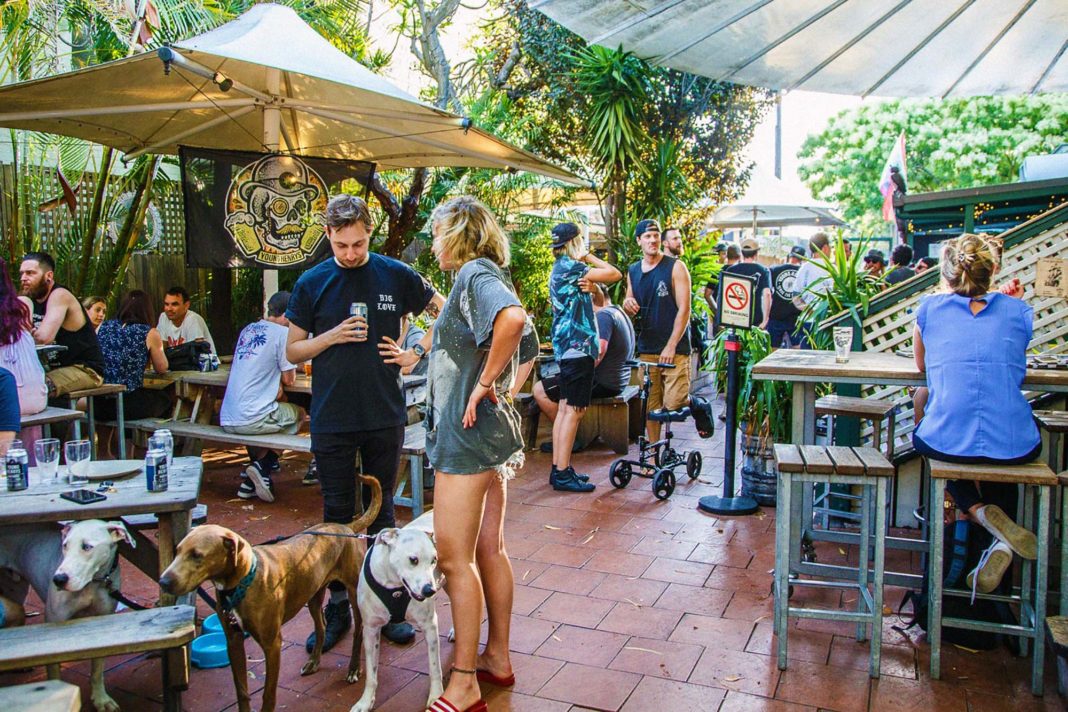 The sun is setting later, the weather is glorious and another stupidly weird and uncomfortable year is coming to a close.

Right now, I want to bunk off work and plonk myself down at lunchtime with hot chips and a cold beer in a sun-drenched courtyard or a rooftop with harbour views, surrounded by shiny happy people, chatting to old friends and making new ones. And here’s where I think that could happen, and if you see me, buy me a beer—or just say hello.

Old Mate’s Place
‘Hidden’ on Clarence Street up 100 or so stairs (don’t be a hero, just take the lift to level 4), Old Mate’s Place has indoor booths for romantic date nights, but we’re here to talk about the rooftop. Tack on another flight of stairs and be rewarded with 360-degree views of the city. The rooftop closes at 11 pm, so get there early and claim a spot among the greenery while the sun is still up. A bartenders bar, you can neck a cheeky VB while perusing the cocktail menu: a list of almost overwhelmingly intricate drinks. My pick is the ‘Pandan Airways’: gin, coconut, strawberry pandan and verjus. I was worried I wasn’t going to like it but… I was wrong (it happens).

Marrickville Springs @ Philter
Sydney loves a brewery, and (even more so) a rooftop bar. Philter has kindly given us both. The opening of Marrickville Springs had a couple of false starts because of the Sydney lockdowns, but—as they say—it was worth the wait. Open Friday to Sunday, it’s a kitsch, pastel, plant-filled oasis under the flight path. Doesn’t get much more Marrickville than that. Have the prawn cocktail alongside a beer slushie (because apparently nothing is sacred) and then indulge in a round of cocktails, currently care of Jacoby’s Tiki Bar. The rooftop doesn’t accommodate many people (capacity is 30) so once you’re done, move on to one of the other amazing venues in the vicinity and let someone else bask in the sun.

Hotel Sweeney’s
Hotel Sweeney’s is smack bang in the middle of the CBD and while it might look a bit grim at first glance, it’s a well kept Sydney secret. The food offering is an endearing combination of ‘authentic Thai’ and ‘traditional pub classics’ which means you can convince anyone it’s what they feel like for dinner. Couple that with an epic view of the city and you have a bloody winner. It’s a super casual vibe, you can get a jug of cocktails for 25 clams, or one of the many draught beers on offer. Sit and be sunkissed in the midst of the hustle and bustle—right across from Town Hall—and feel a bit smug about having a frothy at 3 pm while everyone else runs around below like busy little ants.

Opera Bar
The 4-year old I nannied in Paris thinks I live in the Opera House because he once saw a photo of me outside the building, plus it was frequently on the French news as a visual identifier for ‘Sydney’. I couldn’t bring myself to correct him. At the Opera Bar, there’s always something on: live DJs and music, or the red-hot schadenfreude of watching people in stilettos trying to navigate the pebbles. While you might be paying $5 an oyster, that’s okay—they’re delicious and you’re here for the atmosphere and the views, not value for money. The wine list is pretty good since Solotel took charge; there’s a couple of natural wines and lots of great Aussie producers. Sometimes it’s nice to play tourist.

Imperial Hotel – Imperial Up
A long-standing staple of the Inner West and the place to be if you want to spot a Queen in the wild, the Imperial got a facelift recently and it’s all very ‘aesthetic’, but has managed to retain its appealing edgy-ness. Settle in on the rooftop under fairy lights and eat a rustic-ish pizza while you sip on a cocktail named after an Aussie Drag Icon. The wine list is good, too; lots of well-priced bottles and by-the-glass options, with a smattering of natty wines for those of us who desire the better stuff. Perfect for long boozy lunches that bleed into the evening, there’ll definitely be something outrageous happening downstairs when you decide to return to ground level.

The Courthouse
Oh, The Courty. A Newtown staple, and my first introduction to Sydney’s ‘Inner West’. Some of my most joyful afternoons were spent in this beer garden, meeting up with old friends and accidentally making new ones, first dates, patting everyone’s dogs and inevitably eating the (questionable) nachos to soak up the rounds of beer. If you get bored with the outside, there are TVs to watch sports, and pinball machines and pool tables to keep you occupied. Bump into everyone you know, buy the bartender a drink, add to the graffiti on the bathroom walls, and share your table with a couple of strangers. Plus, it’s definitely close enough to someone’s house for the inevitable kick-on.

The Cricketers Arms aka The Crix
I will not apologize for saying that this is my number-one-best-all-time-favourite pub in Sydney. I know it’s deeply *cool* to like the Cricks, but I was brought here by my favourite ex-housemate Anna when I was still a wee teen coming to visit the Big Smoke, and between the bathrooms, the schnitty and the banter, it was a revelation. There are DJs, the drinks are cold, the food is good, and the courtyard is a little slice of heaven. You can go play pool if you want to, but I’ll be at a wooden table under a palm frond, drinking a Serpent’s Kiss, and patting myself on the back for finally living within walking distance.