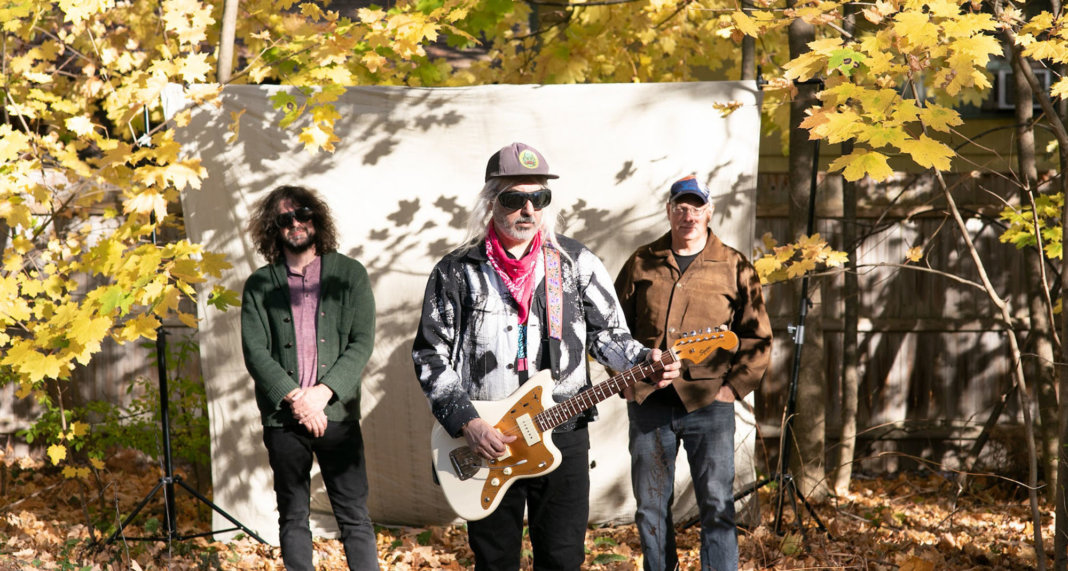 You already know who Dinosaur Jr are. That’s why you clicked on this article.

Maybe you don’t know, though, that the three-piece American rock band have a new album out that’s on par with their best work. Entitled Sweep it into Space, the new record is chock full of jangly and melodic rock songs that belie the world-weary undercurrent of their lyrics. Speaking to the band’s singer and guitarist J Mascis, his mellow but tired demeanour make sense given his age and the number of albums under his belt, but it’s odd to realise that even when the band first started to draw heads in the late 80s, he was exactly the same aloof and ambiguous man he is now. Trying to get answers out of him is like trying to draw blood from a stone, but despite his every answer beginning with the phrase ‘I dunno,’ his ambiguity seemed to cradle certain pearls of wisdom—as if by treading lightly he has access to more delicate insights. Perhaps vagueness is the secret to Dinosaur Jr’s longevity.

Do you ever get sick of playing the guitar? Like, does it ever cease to feel new?

Umm … I definitely think I was sick of it today. I was like, ‘yeah, I don’t want to play guitar or do anything,’ y’know? I’ve been riding my bike and playing guitar a lot and today I was like, ‘I don’t wanna do that.’ But then I do it anyway, and it gets me over the hump and then I’m alright.

Does having a legacy hanging over your head make it difficult to release new music?

I mean, I just kind of get on with it and think of the album as like, ‘alright, this is where I’m at right now, these are the songs I came up with, let’s make the best album I can make right now.’ I’m not thinking about the past or anything, I’m just tryna deal with the songs I have right now and do the best for them.

In an old interview, you said that it became impossible to play aggressive punk music if you were getting laid. Do you still agree with that?

Yeah. [chuckles] that already happened, so. Yeah, it was definitely—hardcore was so pent up and aggressive, and just these raging hormones and puberty and stuff, and once the safety valve is sort of opened, it’s just hard to go back to that much intensity.

Do you reckon better music comes from a state of contentment?

Probably not. It’s hard to say, I guess good music can come from any state, but it’s definitely cool to have that state of such aggression and desperation. I think cool music comes out of it.

Does songwriting now feel like the same activity as before the whole digital thing?

Yeah, it feels the same. Like now it’s easier to record it with an iPhone and stuff. I guess that’s maybe that’s the difference. You don’t have to try to remember things as much and you can record every little bit you think of.

Do you reckon that’s a good thing or a bad thing?

I guess it’s probably bad! Maybe before, if you were forced to remember something, you’d only remember if it was good, but since you don’t have to try to remember it it’s like more crap comes up that you have to wade through later to find the good stuff.

How do you know if a song is any good when you’re writing it?

Usually, you just listen to it and you like it, and the next day you play it and maybe start recording it, and at some point in the process if you get sick of it, then you just toss it. So, the things that make it all the way through I guess are the ones you like. I often will start some songs and then realise that I don’t like them anymore and just not finish ’em. That’s why I never have a lot of bonus tracks, cos I’ll usually abandon them before they’re finished, y’know?

That song ‘I Ran Away’ seems to be about leaving in a similar mode to some of your other great songs like ‘Goin’ Home’. Is that a theme that emerges consciously?

Not consciously, no. But that’s why it’s been hard for me, the pandemic—I’ve never been home this much. I’m used to moving around more. I used to have an apartment in New York and a house up here in Massachusetts, a three-hour drive away. Going back and forth every week, that appealed to me a lot. Getting just that much movement helped. Just staying in one place is hard.

The way your lyrics are written seems to need transience. Do you just pluck them from in front of you when you need them for a song?

Yeah, I just write ’em to sing. I have the melody and I just have to shoehorn the lyrics into the song. I just try to make the best I can of it. I don’t write poetry or anything like that.

Kurt Vile produced and played on this record—what do you think the effect of him working on it was?

Having another personality gives the record some depth, y’know? Someone else’s ideas mixing in, and easing the tension within the band just by being around. He kinda lightens up the mood between us. He’s like a Labrador.

Did his oddball energy rub off on it?

How do you remain so mellow? The new album is really urgent but still laid back, in the same way that you are.

Huh. I was wondering whether it was a result of smoking pot or drinking that you seem so easy-going?

No, that wasn’t me at all. I didn’t like drugs or drinking cos I was in a Hippy Town and that’s what the hippies did, so I was kind of rebelling against them when I was a kid. I just didn’t like it. And like, I liked punk but then they all seemed to be junkies and stuff when you’d read about it. And then I was in a hardcore band, and then I heard other hardcore bands like Minor Threat, and people singing about not doing drugs, and I was really amazed. Like ‘that’s exactly where I’m at!’ It’s cool to hear a punk music that’s really more where I’m at. They’re just American kids, they didn’t have that many problems or anything, but they’re still pissed off. But they’re not into drinking cos that to us was what all these boring hippies were doing, and you’d see all acid casualties walking around town and their brains are fried and you’re just like, ‘this is not what I want to be doing.’

Do you reckon that’s why you’ve survived for so long as a band, being conscious of what you do and don’t wanna be?

Who knows? It’s hard to tell.