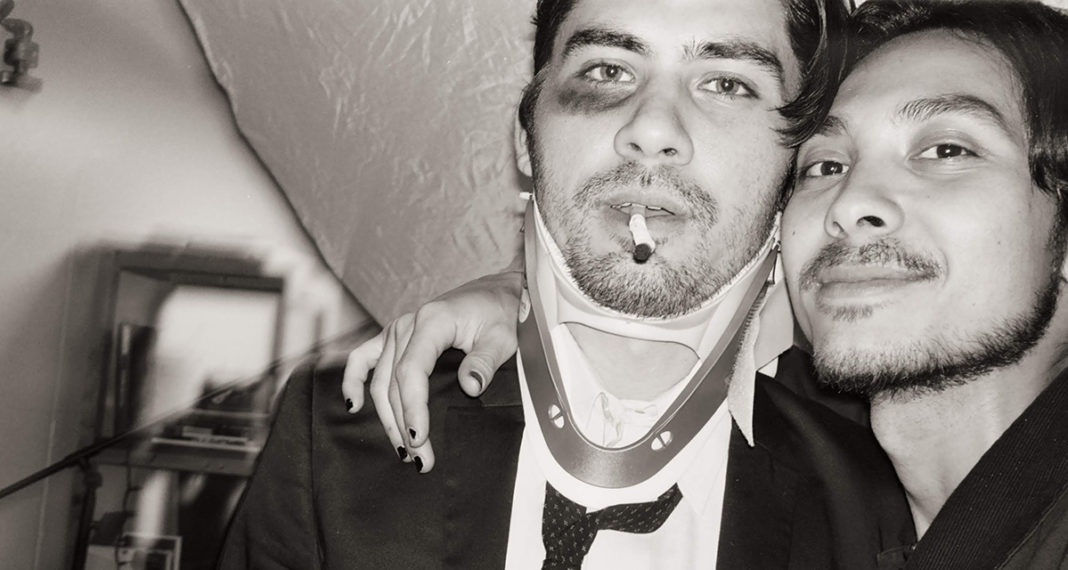 Coolness can’t be sought or bought. It can only be found, reluctantly. It is a hero’s call to action—a call, not an aspiration.

To aspire toward coolness is to glow bright with phoniness. ‘Cool’ is an irreplicable and—most importantly—extremely unserious business. When coolness is done seriously (done wrong, that is) we get 5 Gum commercials, Instagram, and teenagers claiming to enjoy charcuterie. When done right, we get punk rock, good parties, and laid. 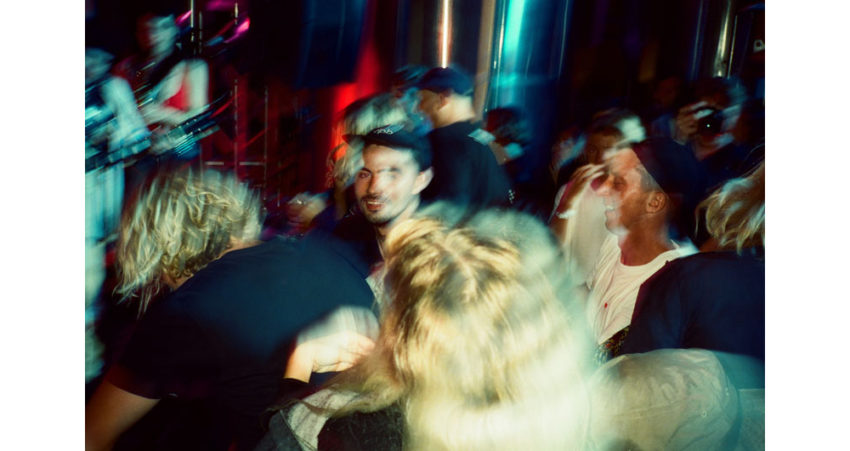 Those who try at coolness won’t get it because they reflect superficiality, unable to see coolness’ ugly, risky, vulnerable entirety. These marketing teams push cool as being taken seriously and have indoctrinated a generation to agree, but to be cool, you have to be a bit unserious—a bit silly. Punks are cool because they aren’t. The music sucks and the mohawks are dumb. They aren’t meant to be taken seriously, so much as they are meant to simply be. They are true believers, and their conviction in this very silly-looking lifestyle awards them their reverence. Rather than seriousness or attractiveness, silliness, camp, and passion have historically been the cornerstones of cool, and everyone wants to be cool. 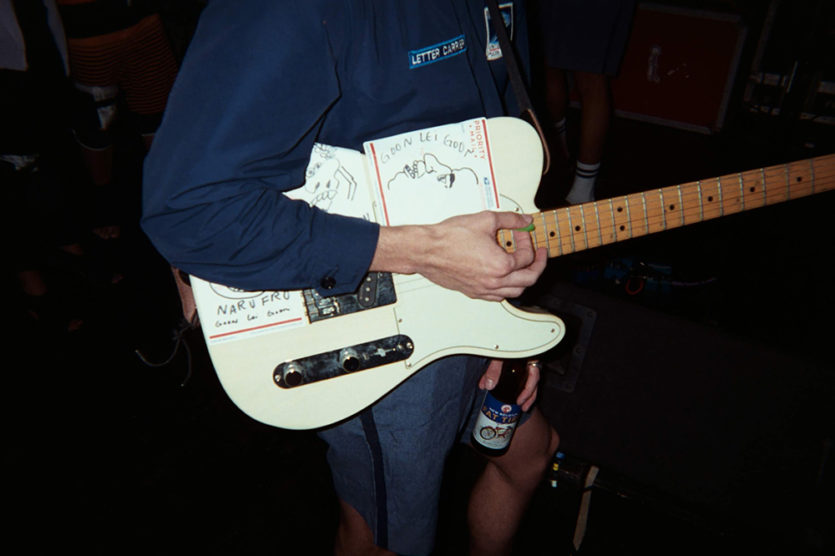 Take disco, born out of a wish to escape strife and live passionately and with excitement—an exuberant reaction to the wickedly cruel persecution of the LGBT and African American communities. It belonged to these communities, had mystique, and a glamorously camp aesthetic. It didn’t take itself seriously and it asked nothing because it needed nothing. In the 1970s, disco was cool until straight white men from the suburbs tried it, decided it wasn’t marketable, and burned disco in a fucking stadium. Now, the angsty straight men of this generation (who enjoy less sex than their grandparents) are realizing that no one thinks they’re cool for reading Infinite Jest at the back of the bar. Meanwhile, they see that the guy making a fool of himself on the dancefloor, sweating and glittery, is surrounded by beautiful people who want to know his name. 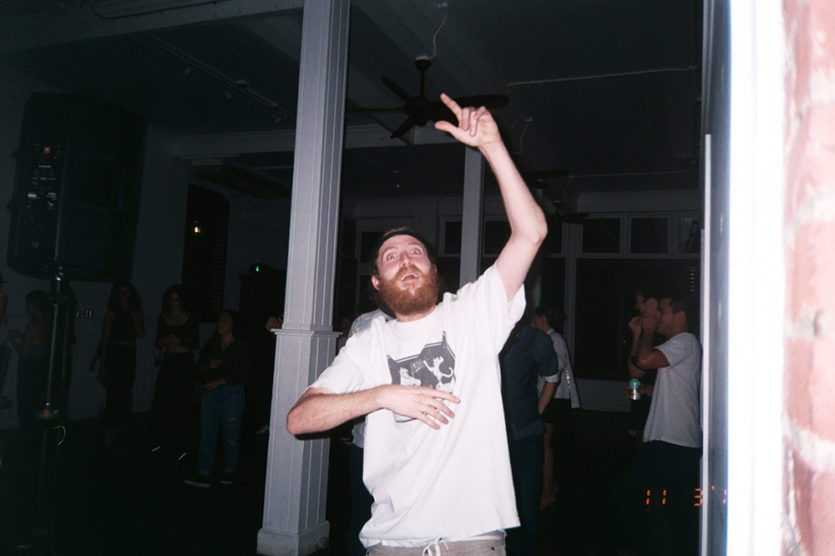 And yet, at parties, raves, bars, and shows, I observe my generational peers completely unwilling—perhaps, unequipped—to relinquish themselves to the social equalizer of a dim, slippery dance floor. They are frail, subdued, and afraid to get too close to the stage; afraid to move, afraid to be seen moving. My young cohorts—phones ever ready to capture a moment—are more observant documenters than willing participants. At a show, you’ll sooner see people scatter than join in when an individual moves their body, a circle forming around them, instantaneous, like a boulder crashing into a pond, or a meteor into the earth. 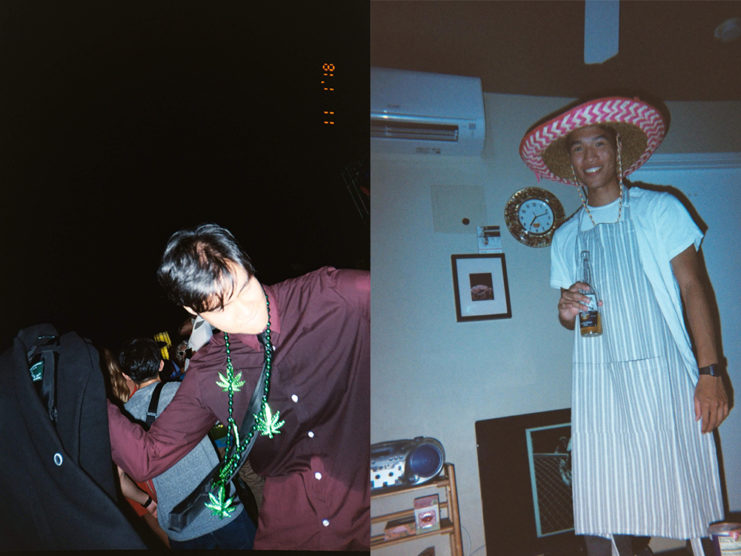 This is not to say that there are no good parties or willing participants. In fact, I believe that they’re happening all around me, all the time. I am sure of it. My case is simply that it isn’t nearly enough for the youth to untangle ideas of coolness and seriousness necessary to shed their inhibitions. Their hesitancy is a result of indoctrination and repression, of not knowing both sides of the coolness coin. They see bad photos or eyes on them during sincere moments and feel vulnerable, their insecurity flaring, which worsens their time. Whatever is to blame, this generation is very insecure, equating silliness with vulnerability, and vulnerability with humiliation. However, vulnerability should be the aim. Being exposed, ugly, and accepted, is what it’s about, and should, when done right, make for a better time. 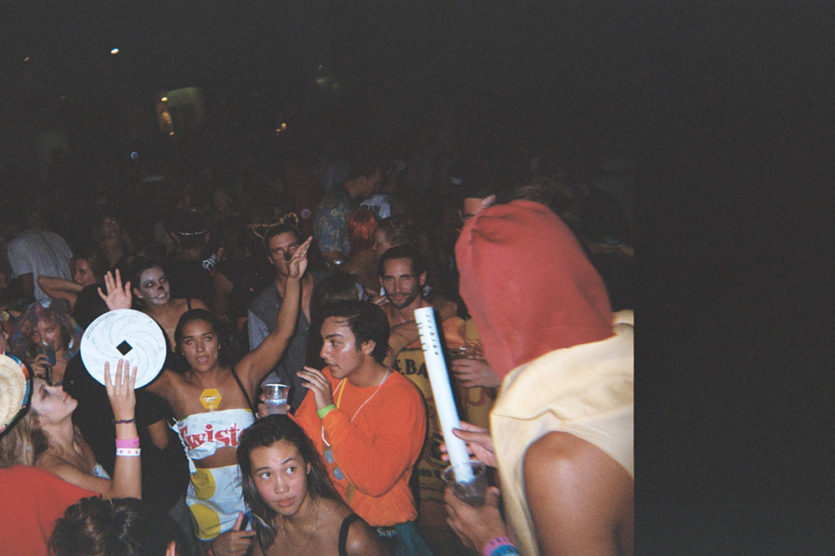 In practice, we see this theory proven. I come from a small island in the middle of the Pacific where there is nothing for the youth to do but find their niche and party. The geographic isolation provides the party scene insulation from worldly influence, making it distinct in substance and completely unforgiving of inhibition.

Looking across a Honolulu dancefloor, you’ll find it nigh impossible to identify the cool people in the room. All are sweaty, smiling, and painfully unappealing. This is because serious and appealing—or even cool—is not what these people came to the club to be. They came to dance, to be stupid, to romp, to be vulnerable and exposed, and to be accepted safely in the hands of their community. Surfers with skaters. Painters with boxers. Punks alongside CEOs. These people didn’t come to be seen, gain followers, or expand their brand. They came to have a drink, dance in the hot dark, and, if need be, make ugly, jubilant faces into the ephemeral light of someone’s fortunate camera. Where the broader youth feel humiliation, these goers see their smeared faces and laugh. 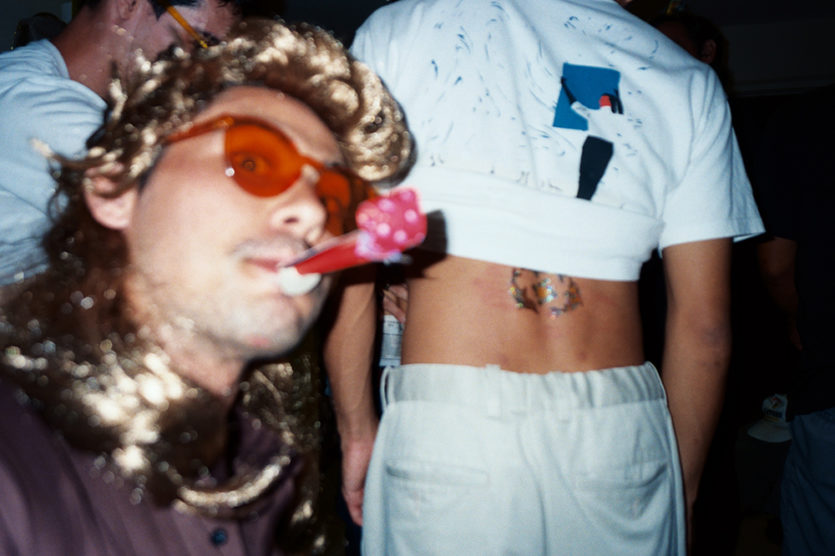 This writer proposes with sincerity, a shift in the perspective of cool; that we, the young, bored, dumb, obliquely-consumerist, anti-cultural partygoers, dispose of the self-branding and nervous wall-leaning that has burdened would-be joy havers—a fake idea of cool that made us stoic and insecure.

This is a love letter to the silly, the sincere, the risky, the vulnerable; an advocation for pulling your shoulders away from the wall, and for going to the party in a hotdog costume. For having sex. For jumping—alone if need be—to your song, fruity cocktail in one hand, middle finger in the other. For participating. For denying the seriously cool that you’ve been sold your entire life by corporate marketers in the form of espresso martinis (the least danceable drink) and ‘curated’ vintage reproductions. For putting your ego down at the edge of the dance floor. For starting a band. For getting a big fuck-off mohawk. For failing at something big, rather than never trying at all. For letting yourself be seen, photographed, taped, posted, and archived in all your ugly, sweaty, glimmering aliveness. 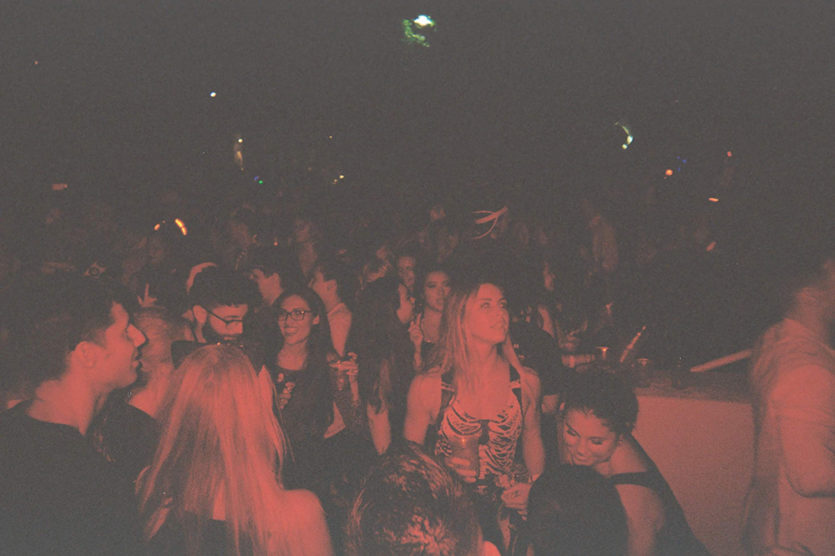 A party in New York City, full to the brim with 20-something’s, sophomoric hormones, and full pockets, standing completely still, watching a band play a good fucking song. Suddenly, a shuffle. People clamor. A mist of liquor and ice is spat and so begins the maelstrom. A moving torso becomes two becomes five becomes ten. The song nears its crescendo and hands reach into the air like prayers flung to God. Two kiss in the steam, their tongues smolder. The song ends. The people are embarrassed, free, and happy. 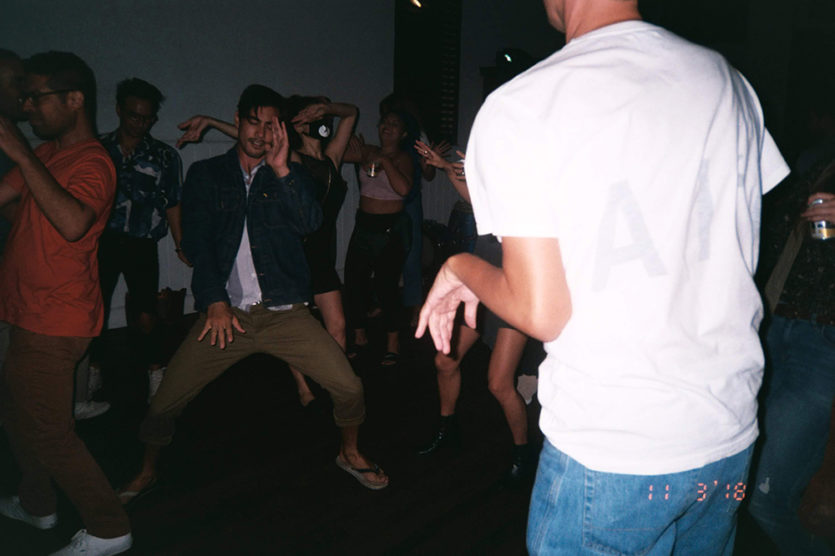