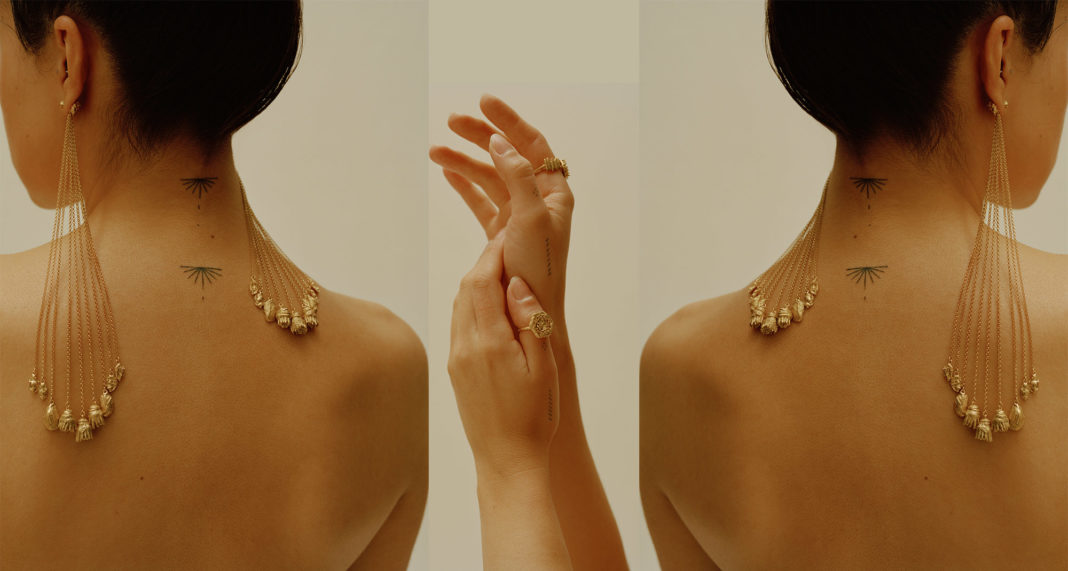 Photographs courtesy of Gavin Green and the artists

A decade after testing out her stick ‘n’ poke skills on a friend for the first time, Stanislava Pinchuk’s tattoos have finally found their way into a museum.

The Ukranian-Australian artist (who also goes by the name Miso), has had a busy few years. Alongside her works that map the changing topographies of war and conflict zones, she’s tried her hand at beekeeping, curated music for yours truly, continued to tattoo her nearest and dearest in a trade-only system, and probably sunk a few late-night whiskeys in the process.

This month, Stanislava keeps her foot firmly on the gas by taking on the mammoth task of presenting her first museum solo show and curatorial programme at Melbourne’s Immigration Museum. Titled Documenting the Body, the suite of exhibitions expands the idea of what it means to be marked, and the history and representation of tattooing.

Included in the works is Immigration Granulation, a collaborative exhibit from Stanislava and Melbourne-based jeweller Zaiba Khan. In the exhibition, delicate pieces of Zaiba’s handcrafted gold jewellery works in synchronicity with Stanislava’s equally intricate tattoos, mapping arduous immigration journeys onto the bodies that made them. It’s phenomenal work, and you’d be mad to miss it if you’re in Melbourne in the following months. We caught up with the pair ahead of the May 24 opening at the Immigration Museum to chat about the stories our bodies tell, the intimacy of tattooing, and how to clear a room with just one song.

Stanislava, Documenting the Body is your very first curatorial programme. Can you tell us a little about what drew you to include the work of Brook Andrew, Angela Tiatia, and Paul Stillen?

Stanislava Pinchuk: The phrase ‘documenting the body’ is such a huge umbrella for ideas, contradictions, harmonies, universalities… everything. It’s really loaded and heavy, but celebratory and wonderful, too. So, for me, all these works really touched the concepts  I wanted to weave into the museum’s winter programme.

Combined, these works touch on the historical cruelties and tension of documenting bodies, particularly with a foundation of First Nations perspectives. They all touch on feminism and modern bodies, on globalised economies, on carrying traditions, and on hybrid identities. They all celebrate tattooing as a marker of belonging, but also as a sign of the ‘outsider’—often at the same time! It’s my first time curating a museum and, honestly, I’ve loved every minute of putting this together. It’s the best challenge, and I had so much fun.

Zaiba, your work is incredibly beautiful. How did the idea for you and Stanislava to collaborate for Immigration Granulation first come about?

Zaiba Khan: This body of work was definitely a convergence of two paths. Stan has been tattooing for a decade now and I’ve been researching traditional adornment, including tattoo, for a while. Last year, I began to work with the technique of granulation, but with the use of the natural grains, seeds and spices (as opposed to traditional gold or silver granules). At the same time, Stan was thinking of creating work with bodies, tattoos and jewellery-making compositions. We both map in our own ways, looking at migratory paths. So, over a drink, all of this became Immigration Granulation…

SP: … in about five minutes! It came together so naturally; I remember us just looking at each other, kind of stunned. I don’t think we’d even touched our drinks yet. I’ve tattooed Zaiba a fair bit over the last few years and, in return, she’s made me a few pieces of jewellery. They’ve both been really collaborative processes, just between the two of us late at night—so we were already working collaboratively, and were pretty inspired by each other. We are both fairly tattooed and wear way too much gold, so I think we have always bonded in seeing it all as the same thing.

The tattoos and jewellery work together in perfect unison. How did the process of the collaboration go?

ZK: It was pretty special, sitting with our friends and talking through their ideas. Mapping their journeys, seeing how different that kind of mapping is for each person. Tattoo and jewellery both directly relate to the body: you have to think about placement and movement. It was beautiful responding through the two mediums; to the personal histories of our friends and in making lifelong–if not longer–possessions for them. It also helps that we’re both on the same page when it comes to gold: the more the better.

SP: And we really did work in unison. Zaiba drew and placed a lot of these tattoos with me, and we both worked out the jewellery to fit around them, adjusting both elements as we went… with the subject’s involvement too, of course! My favourite part was looking at our tendency to think of the tattoo as the ‘permanent’ mark, and jewellery as the thing we can take off. But really, when you think about it, tattoos are usually the first to be buried underground, while gold outlives us and gets passed on. I’ve really loved playing with that. It’s such a beautiful analogy to think about immigration and lineage through, too.

Zaiba, what was the most important thing you learnt through creating this series of works, as opposed to working solo?

ZK: The importance of respecting and honouring the stories people entrust you with.

SP: That’s the most beautiful sentence! When you tattoo, that’s exactly it.

Stanislava, I saw you mention recently that this year marks ten years of tattooing for you. Why do you think it’s taken some time for you to incorporate it into your work?

SP: When I first started, I always knew there was really something in this medium. I knew that I’d use it in artwork one day, but I just didn’t know how or when. But I knew that I had to keep exploring it without pressure, and the answer would come. No shops, no public appointments, not a single cent for it. It had to be pretty free.

During these last five years, my art practice really began to be about data-mapping war and conflict zones which, you know… it’s a pretty big beast. It’s a vortex to delve into something like that and run it yourself, independently. There has been—and still is—a war in my home. It’s been huge. So, I’ve been busy. But I knew this other idea would align naturally sometime, with the right museum and collaborators who got it. And it did better than I ever expected!

It’s pretty well-known by now that your tattoos are only created for friends and for trades, but I’m sure that hasn’t stopped people from trying. How many DMs are you getting?

SP: So, so many. I feel really lucky that so many strangers, every single day, write and trust me with their bodies. People often think of me in some of the hardest, biggest, most vulnerable times of their lives. It’s really incredible. I don’t take it lightly, and I wish I could oblige every single one. Sadly, it’s just not something I can humanly take on, on top of my studio work. I can never even get through my friends that are waiting in any city.

And honestly, it’s so intimate to me that I’ve never felt right to take on tattooing anyone I don’t know. I think I do a good job only because of the love that I have for that friend, and knowing why they want something, knowing what they’re going through in life, and also really being familiar with how their bodies move, how their muscles and clothes fall. Many tattoos we talk about for years before they happen, whereas some are really spontaneous! I like that, rather than booking appointments and having things set in stone.

You’re jumping on the decks for the opening night of the show, too. What does a Miso set always include?

SP: At the moment, Googoosh’s ‘Talagh’, which didn’t make it onto the Monster Children mix I made! But I do like to end every set with blasting Prince’s ‘Purple Rain’ when the bar lights come on. Everybody, go home. Before that solo starts, you know it’s coming.

Documenting the Body: Curated by Stanislava Pinchuk is showing at Melbourne’s Immigration Museum from the 24th of May until the 5th of April 2020. Get there.