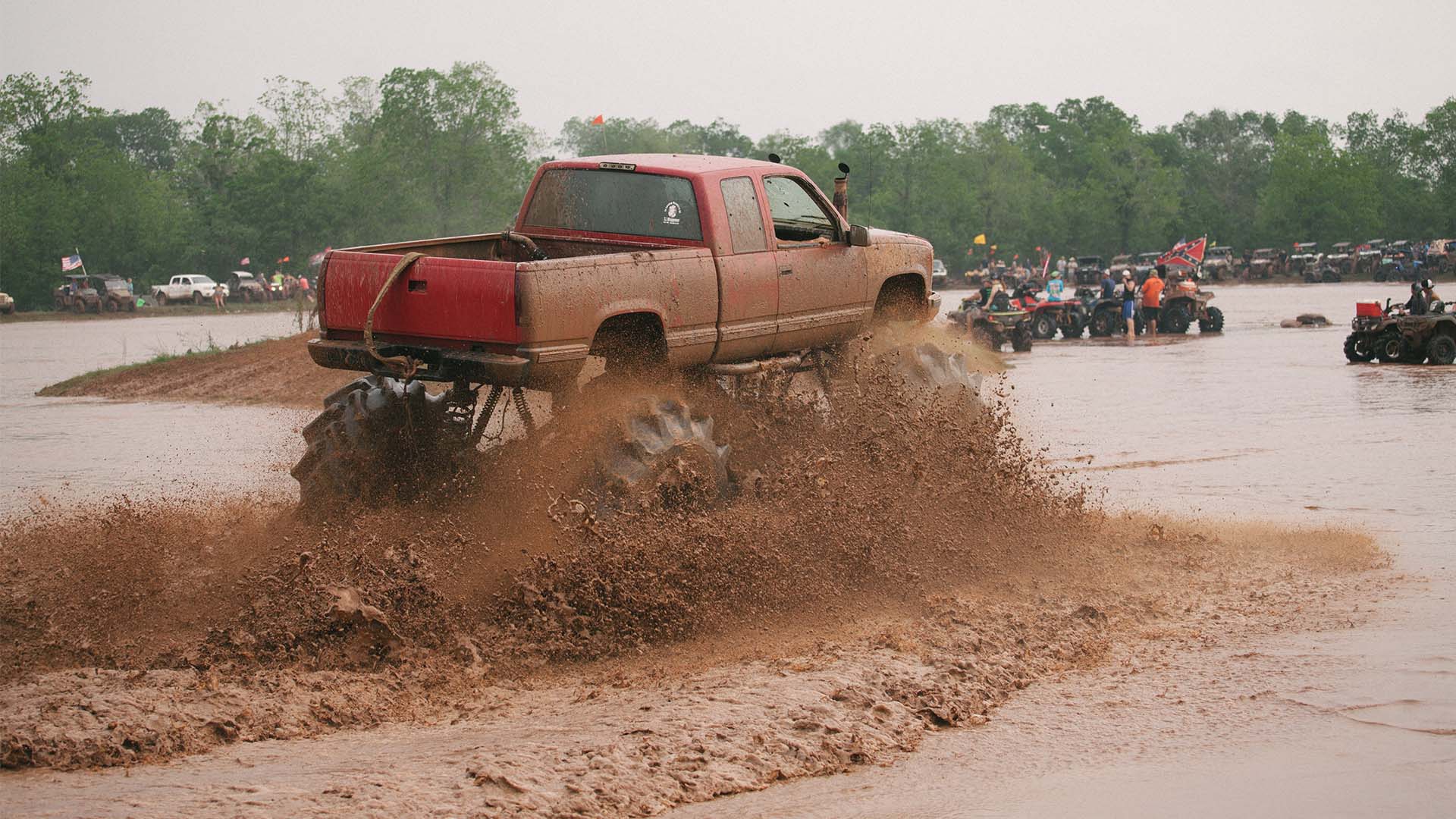 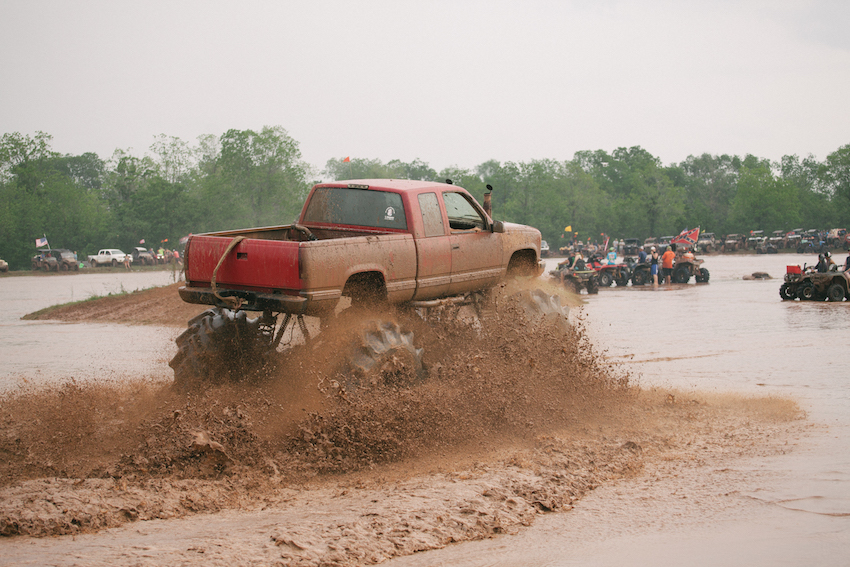 Words and photos by Sean Bradley

The Lousiana Mudfest advertised itself somewhere between an amateur monster truck rally and a four-day spring break.

The teaser video shows flying trucks with quick cut-aways to twerking women in the backs of golf carts. It cost $40 dollars for a 2-day pass. Most visitors are from the surrounding Louisiana towns and almost everyone came with at least one ATV or off-road golf cart.

Many Confederate flags were raised (all exclusively flown, both openly and proudly, by white people) and yet the event included a significant number of black drivers and partiers. While black and white groups didn’t really mingle, but there was no visible antagonism on either side; everyone was notably friendly. 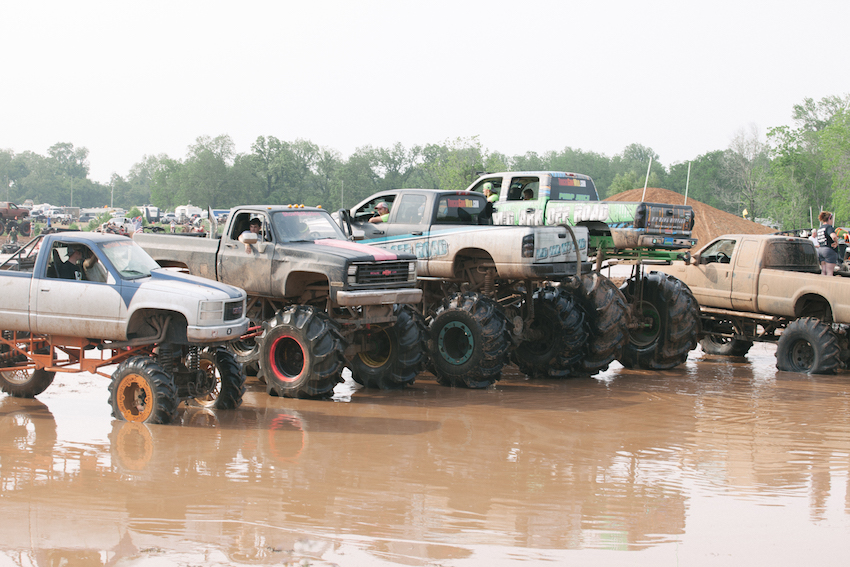 Hip-hop was the dominant music of the event. Despite booking a Zydeco band as the headlining musical act, virtually all cars played some mix of early-2000s rap and 21 Savage/Migos/Drake. None of the music was censored, and the n-word played loudly through nearly every speaker.

During the day, the events were completely consumed with truck and mud worship. People ogled the largest of the trucks and watched them dive deep into mud pits. At night, the muddy paths were clogged with ATVs and golf carts, and the monster trucks were converted into stages that hosted amateur strip shows, complete with poles and lights. Most people wore Mardi Gras beads, either donning them as a reward for showing their breasts or waiting to throw them at whoever bared theirs next. 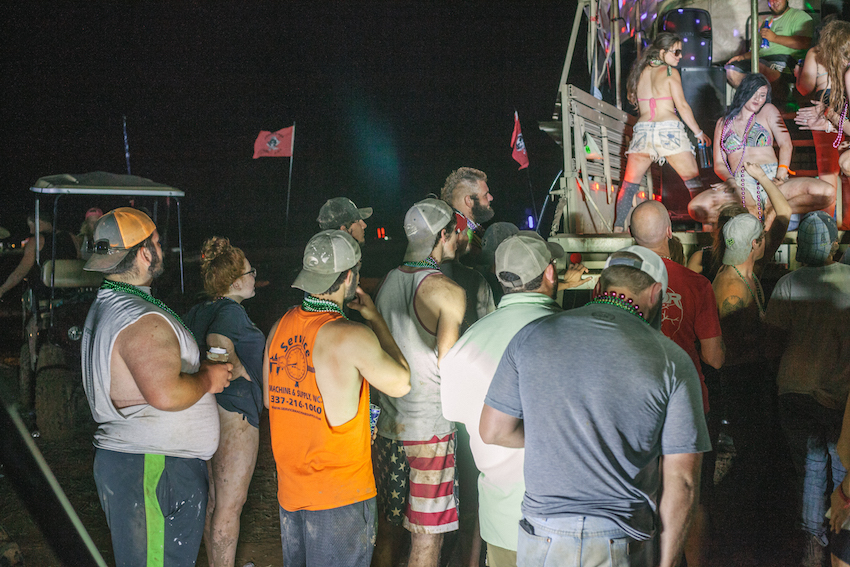 I met Tracy, her two daughters, and two coworkers. Tracy invited me to be their personal photographer and gave me two Bud Lites as we drove around listening to Lil’ Jon’s “Drop It Like It’s Hot” and heckling shirtless men. Tracy kept telling me to take a photo of her daughter’s friends butt: “Doesn’t she have an amazing butt?” We pulled over two times in 30 minutes to refresh our beers. They were very friendly and hospitable and I regretted losing track of them after I ran back to my Kia to fetch more batteries for my camera.

I met Debbie and her husband, Fat Cat, who explained how he got his name: he’s obese and “loves pussy.” They named their car ‘Lil’ Bad Bitch’. Debbie is a high school vice principal and mentioned she recognised many of her students at the event but told me, “What happens at Mudfest stays at Mudfest.” She said she wouldn’t be telling any parents about what their children did during the event. 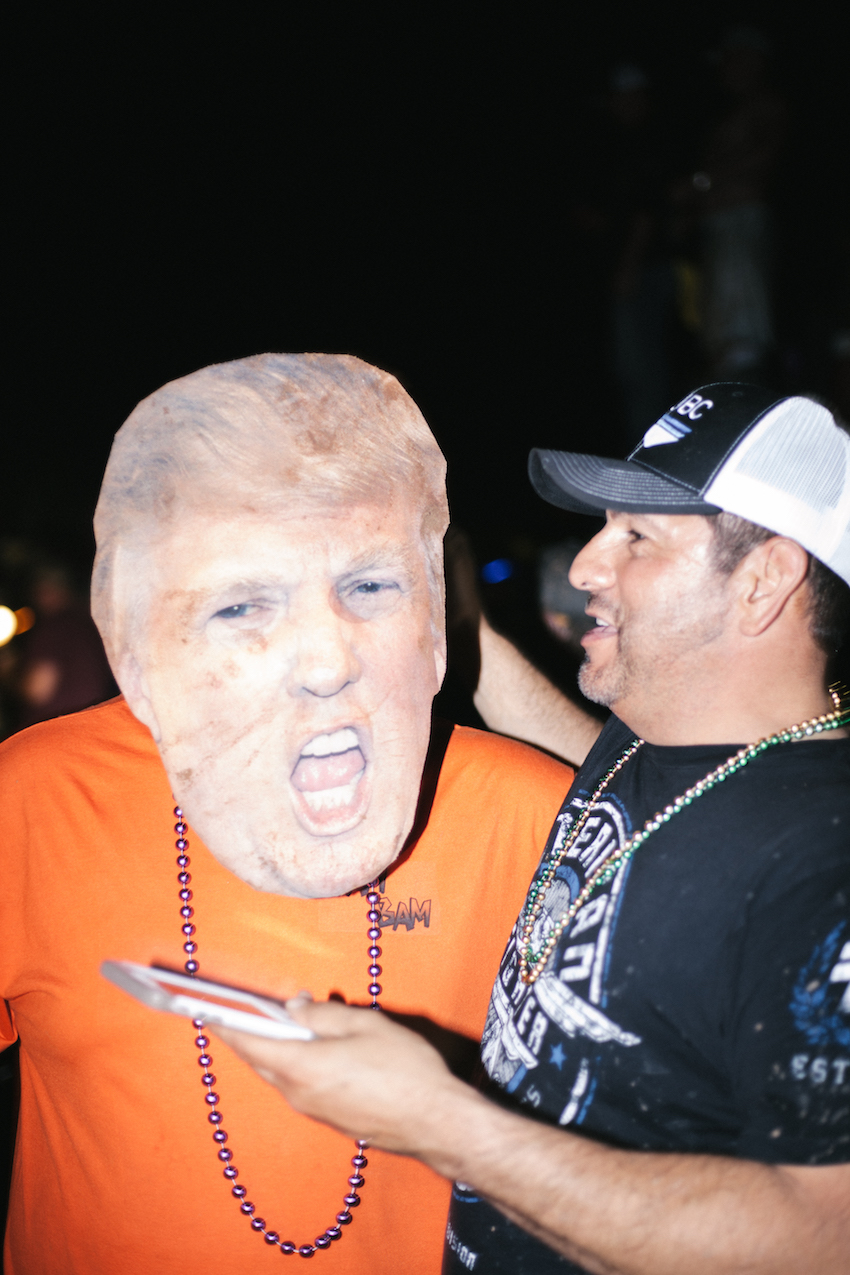 I met Dakota, a monster truck owner who wore a Donald Trump mask, and he invited me to stand on the bed of his 12-foot high truck and throw beads. He gave me a tour, showing me the massive suspension and instructing me on how to climb up the massive tires. He excused himself to pose in his Trump mask with a young woman in a Confederate flag bikini.

The stars of Louisiana Mudfest, however, were Jerk This, Lil’ Rowdy, Crawdad II, Down-n-Dirty, Meaux Money, 4Play, The Other Woman, and Lil’ Bad Bitch. Easily written off as a regressive event of casual racism and misogyny, I left seeing what “Southern Pride” means in Trump’s America. It means black participants enjoying mudding beside their white counterparts, but not intermingling. It means the sexual objectification of women, often led by other women. It means vast divisiveness temporarily unified by motors and mud. 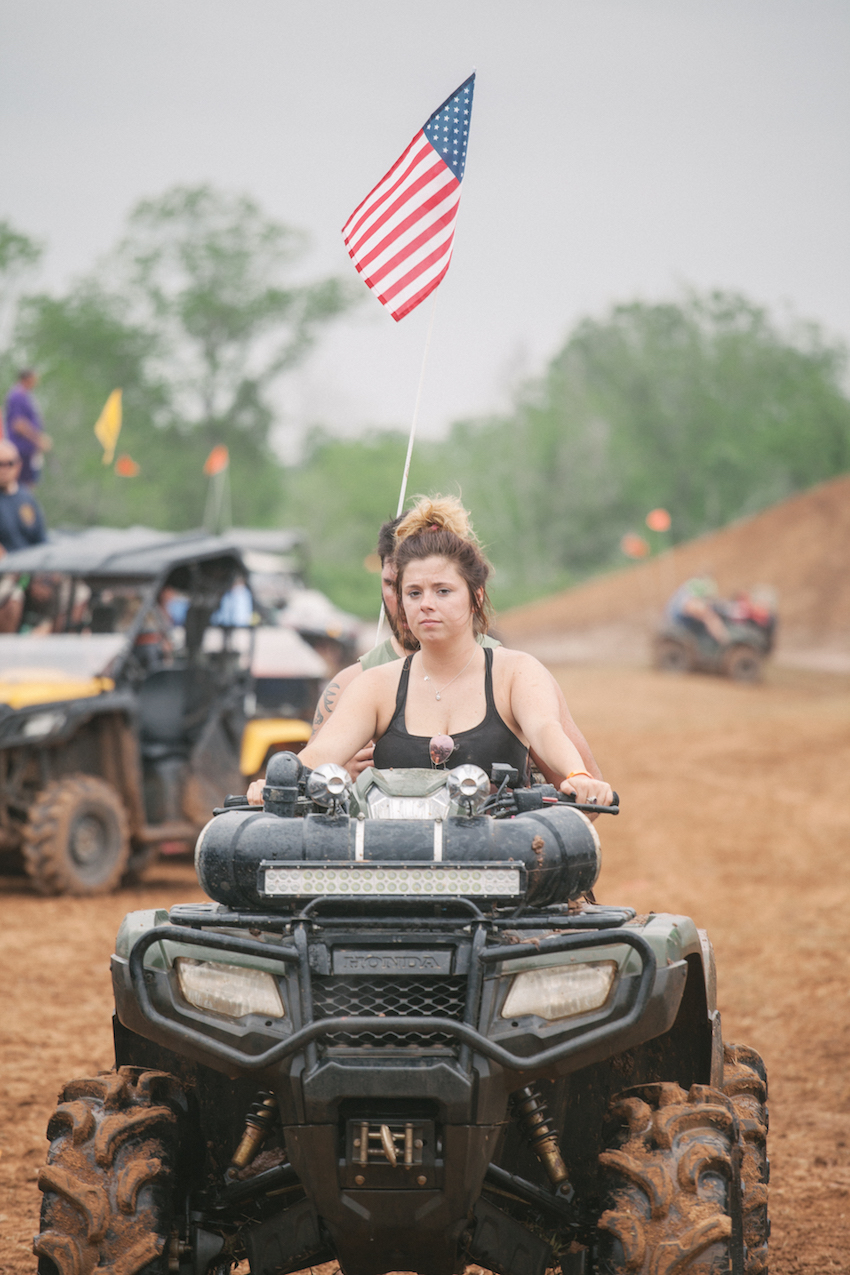 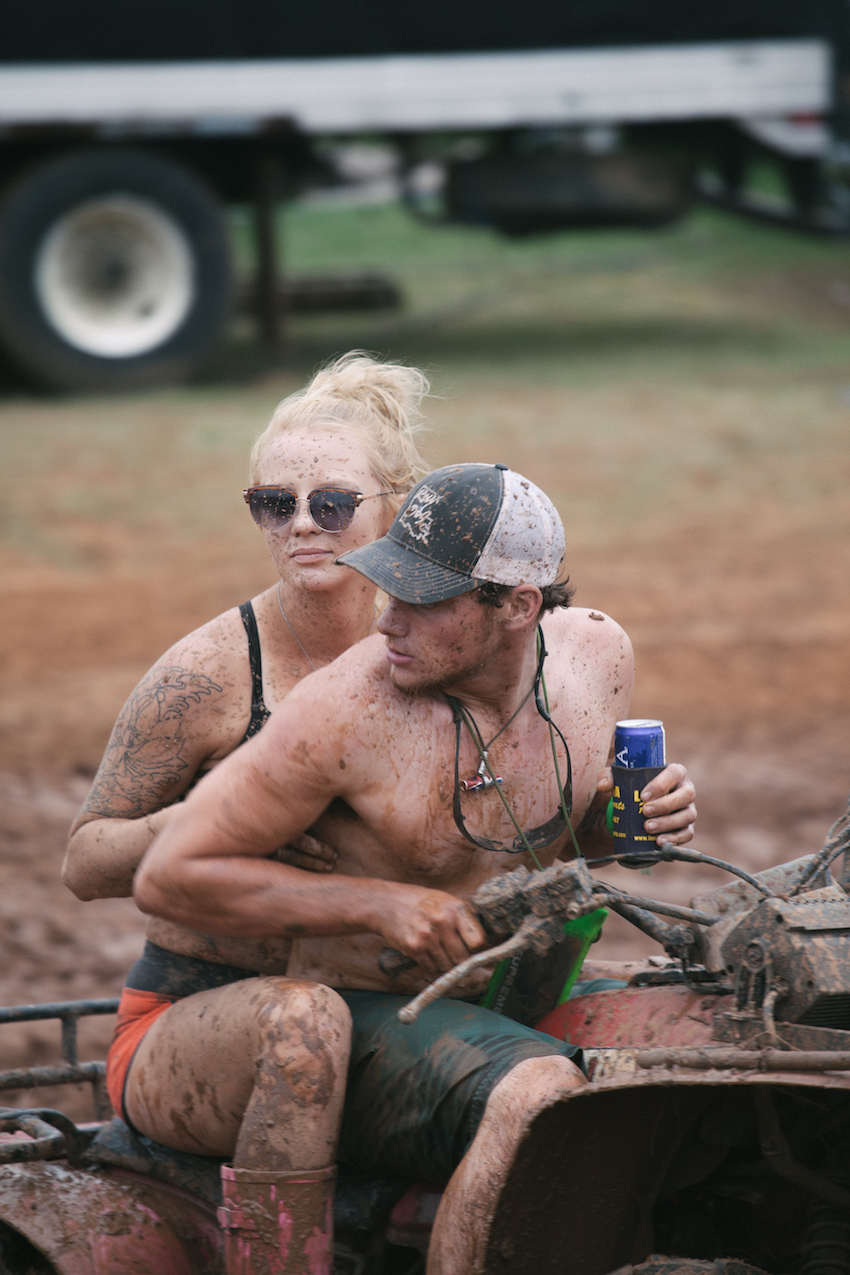 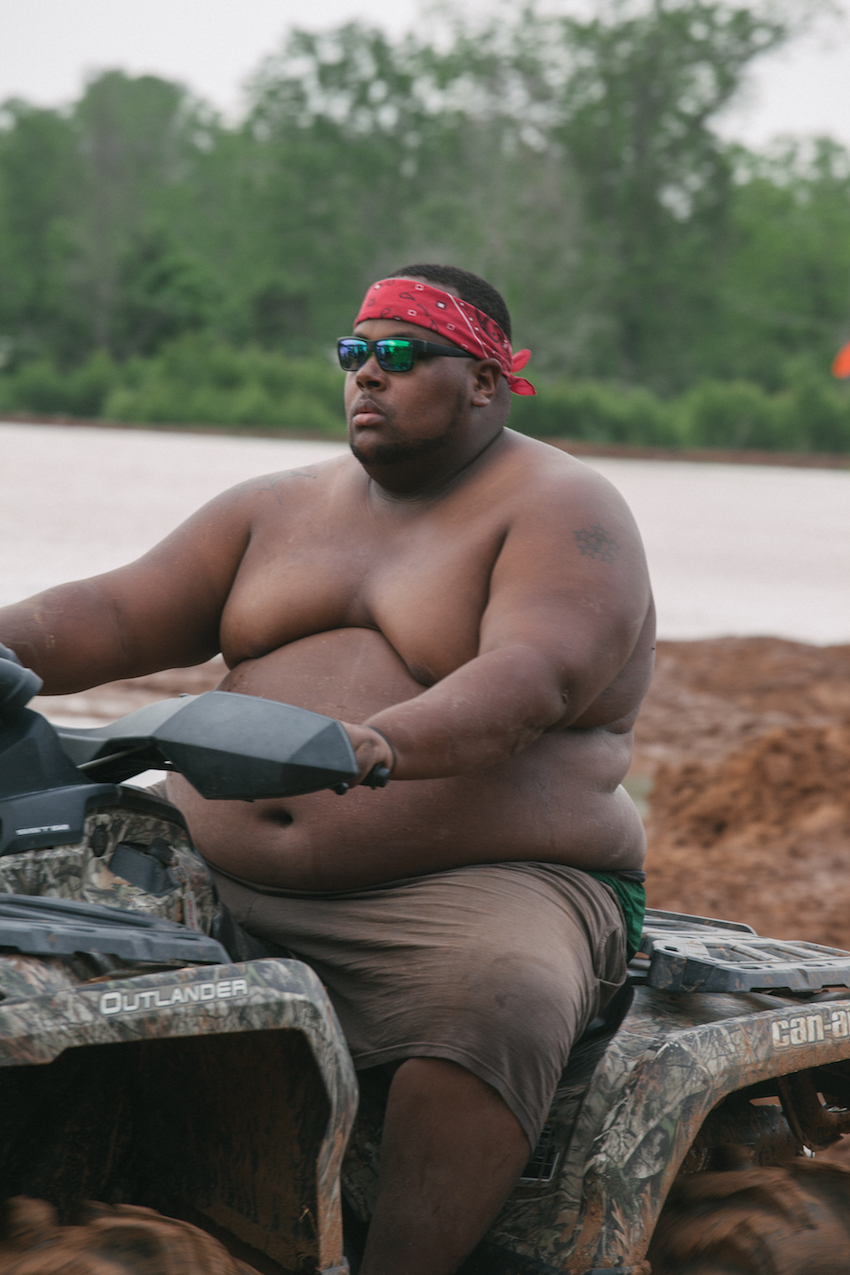 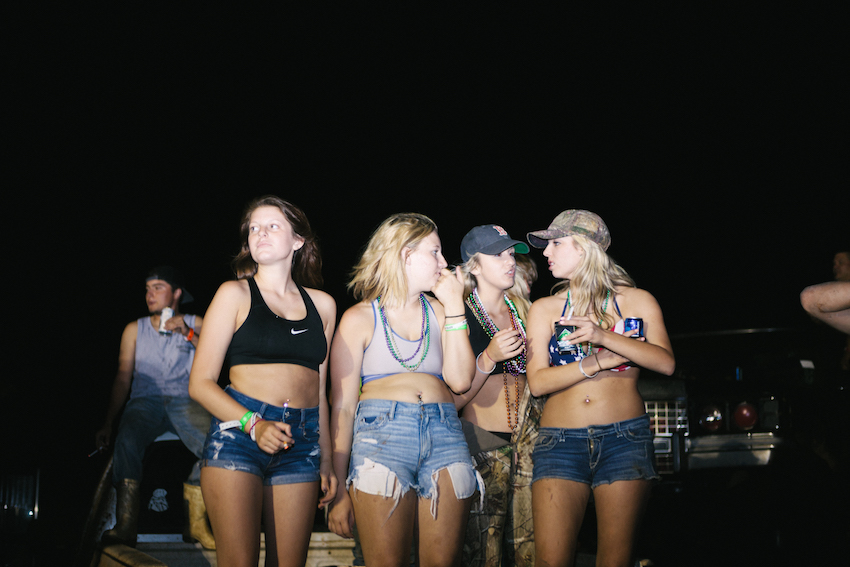 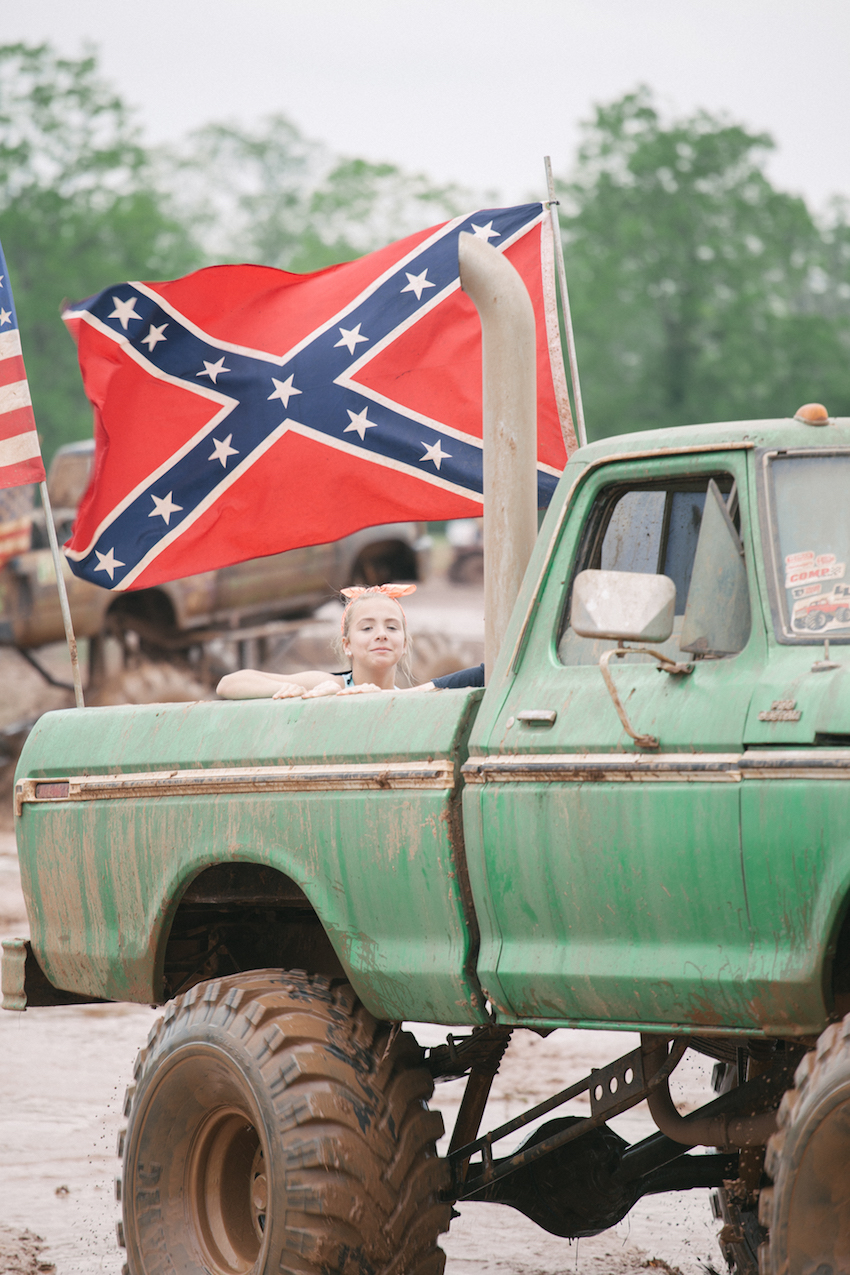 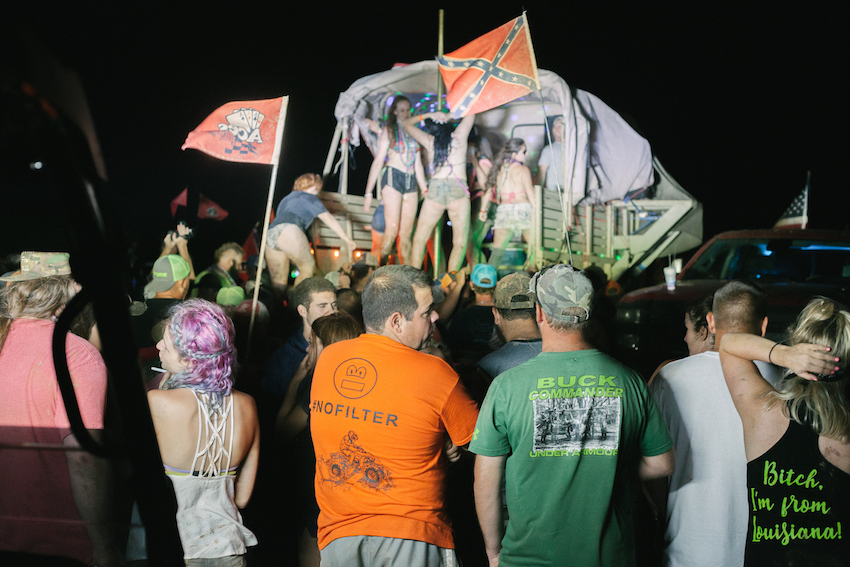 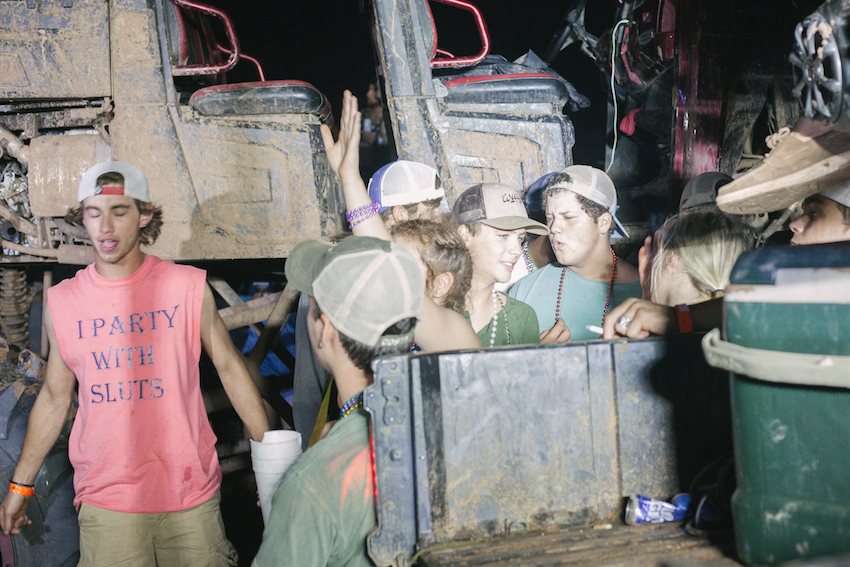 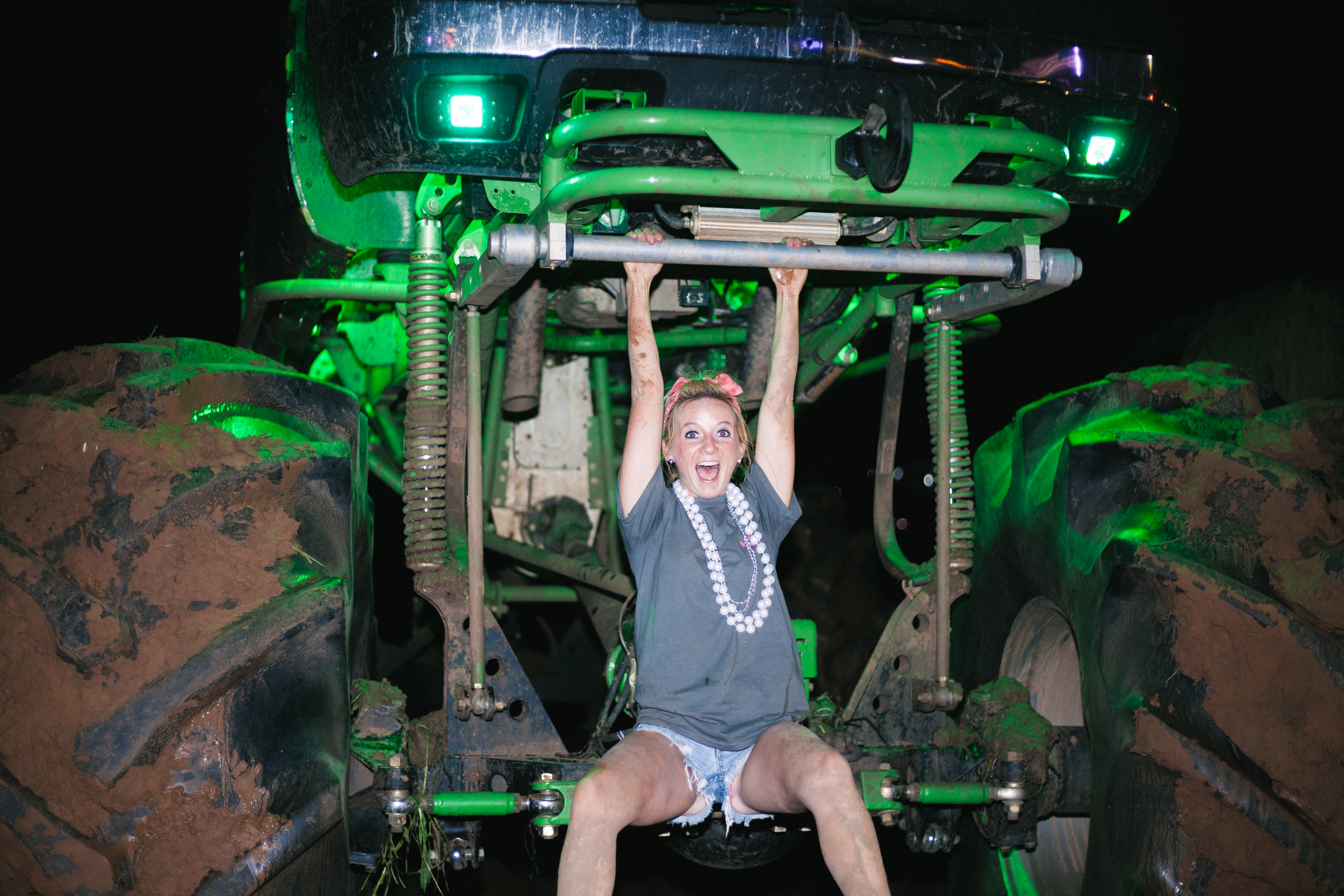 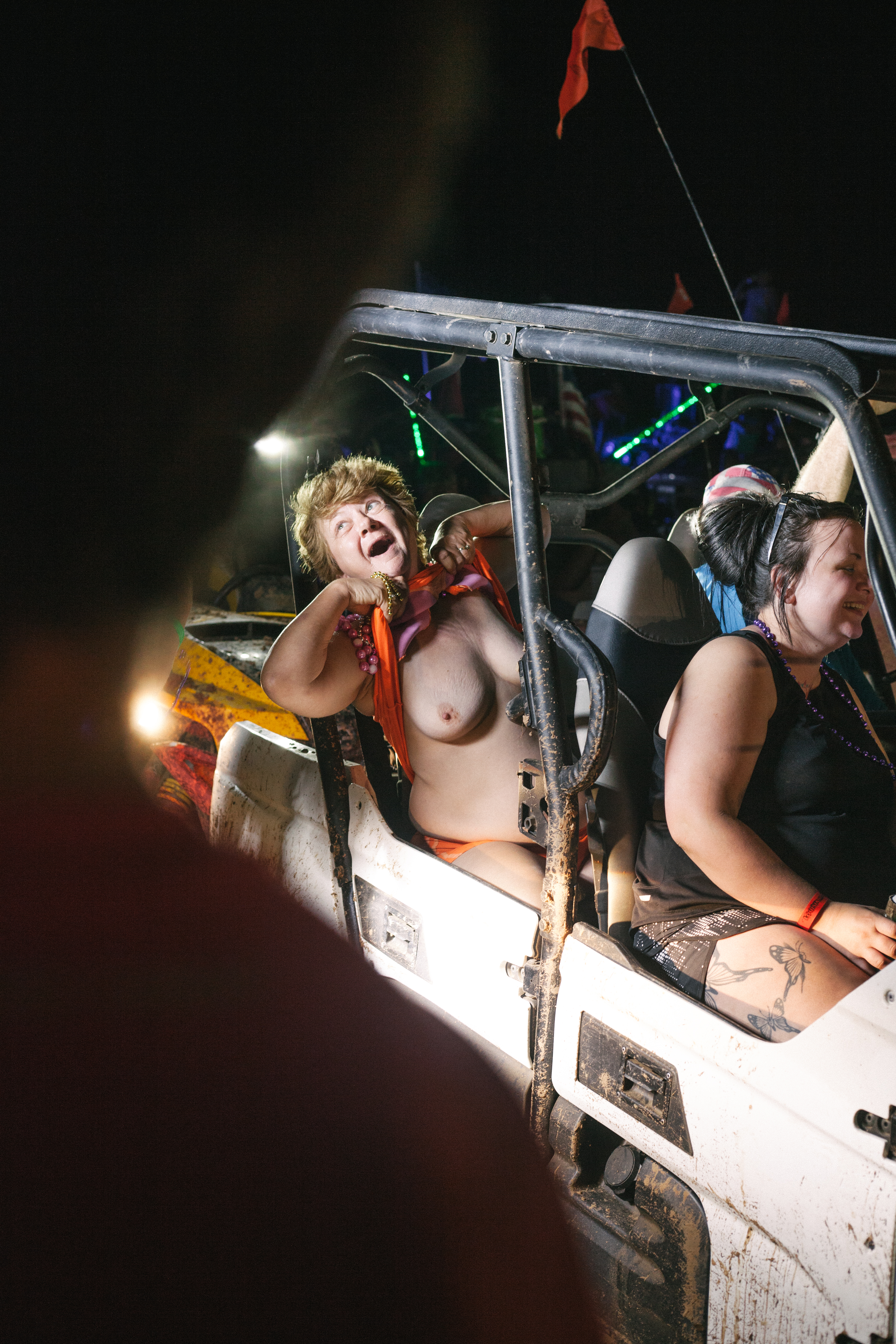 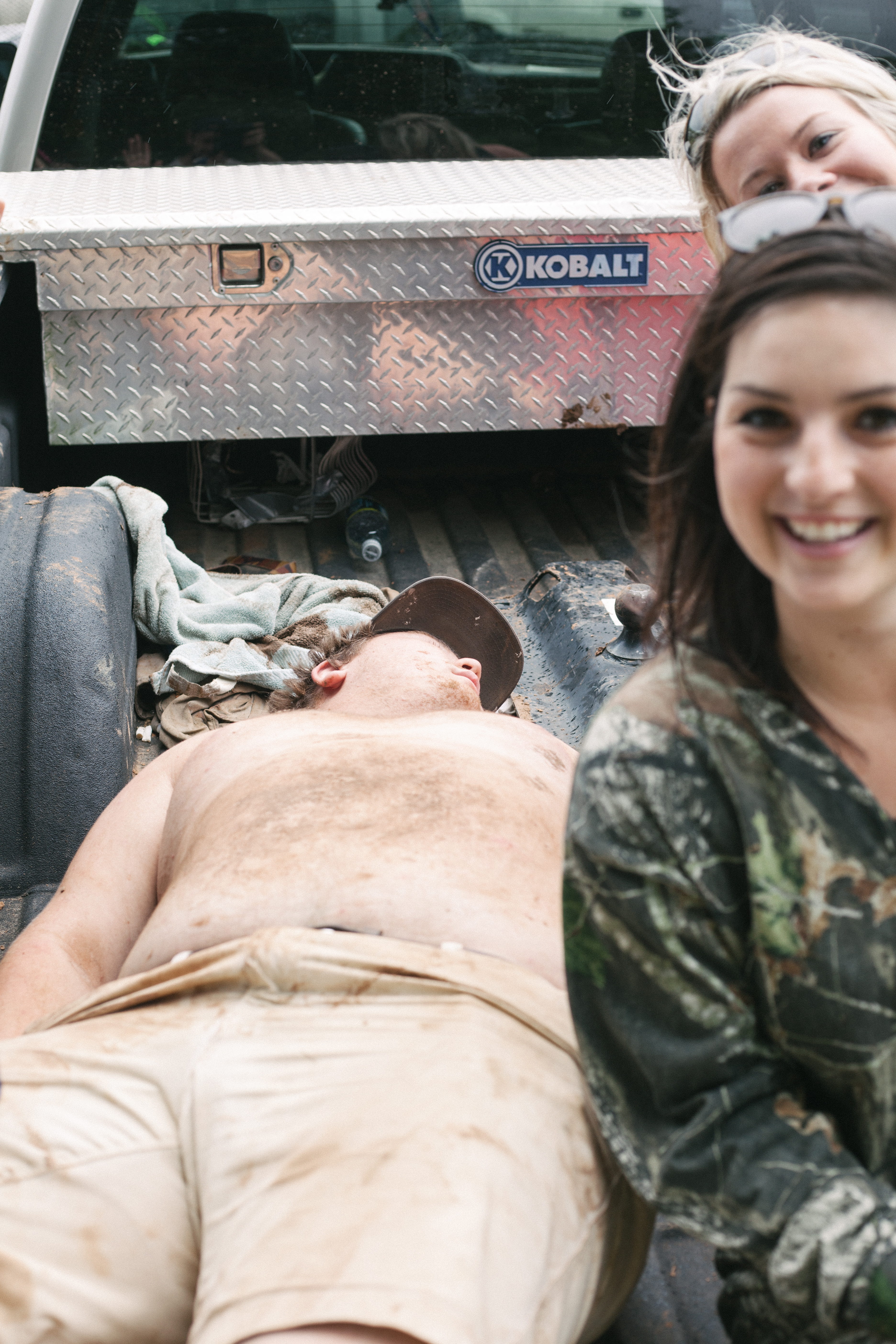 Check out more from Sean at seandavidbradley.com