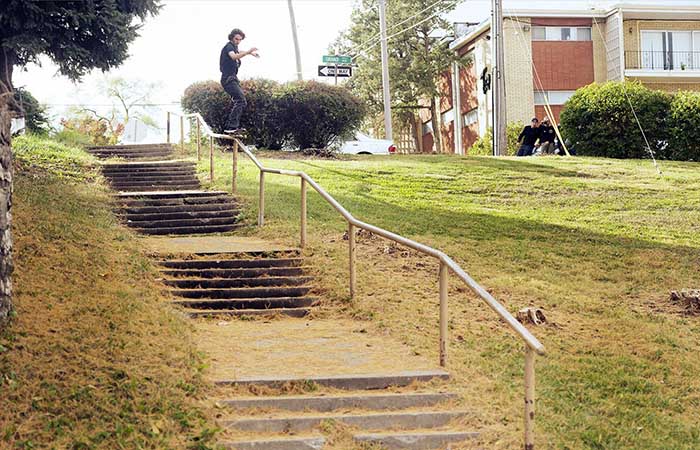 I don’t know about you, but every single year I forget that Thrasher‘s Skater of the Year is even a thing.

Well, that is until about a week out, when the powers that be initiate their annual marketing campaign, rich with varying calls to action (“WHO DO YOU THINK DESERVES THE SOTY GLORY??”) and fourteen-minute mega compilations of pro skaters giving their two cents on the matter. Back in 1992 it was a different thing—I would probably have had to wait for a magazine to come in the mail to even know that Cardiel won, and I probably would have been real excited about it. But in the year 2016, with persistent media outlets and regular old life being so deeply intertwined, it would be remiss of me not to start by saying that the format for SOTY content in the age of social media is downright annoying and, more importantly, I couldn’t care less who the old guy in crooked glasses thinks skated best this year anyway.

On Sunday, they painted Ernie Torres bronze and had him pretend to skate from point A to point B to surprise his Real teammate, Kyle Walker, with the presentation of himself as a statue. Did Kyle Walker deserve it? I mean, maybe. Everyone skated insane this year. A lot of people think that Tiago Lemos was robbed, and to be honest, I can’t disagree. There are some irate theorists suggesting that the vote was rigged; that, not unlike Brexit or the Tr*mp victory, to award this corn-fed white dude from Oklahoma the crown over a prodigal Brazilian brown guy was yet another of the hundreds of injustices for which 2016 will be eternally remembered. Again, I don’t have an opinion because frankly, I couldn’t begin to give a shit either way.

Something that I have truly found to be thrilling is how neatly the variety of companies, from seasoned board makers to giant shoe companies, have planned around the Skater of the Year award, seemingly each year, all year. I’m sure Alex Olson isn’t holed up in his purple plush 917 lair with the Nike execs figuring out a year-round campaign for how to earn Loose Trucks Max SOTY Gold, but it seems pretty evident, looking back on the year, that a couple of similar think-tanks have to have existed for OKC’s favourite son, Kyle Walker.

Volcom, Vans, Real, and dare I say, Thrasher, have all done a pretty perfect job of rationing out the public’s intake of Kyle Walker throughout the year. First, we had a chance to get to know him via his shoe sponsor’s 2015 magnum opus Propeller, a vid that earned AVE the title. Then, this February, Volcom announced that it would be unveiling its new video offering. That video came out in May. Then in June and July, they commenced their campaign for Kyle’s Vans pro model.

The commercial and magazine ads featured a man in a giant “Waffle Cup” costume—an eerie, very literal personification of the main feature of the shoe, who they chose to name “Crispy”—who Walker, Elijah Berle, and Chima Ferguson are all forced to interact with in the two-minute commercial, and at one point Kyle Walker also hugs it. So we’re sitting with that for a few months, seeing Kyle, the massive handrail that he 50-50s and this fucking big, weird cup in every issue of every magazine including, but not limited to, Thrasher. That’s until we transition nicely into October, when Real Skateboards released a new edition of their “Surveillance” series featuring, mainly, Kyle Walker. Then, two months later, the same exact week as the Skater of the Year announcement, Vans with no notice drops a video (on Thrasher) featuring two parts and a montage, Elijah Berle first part, then curtains for Walker. Then they announced him Skater of the Year.

I’m not saying it’s rigged, I’m still not saying that it matters, but I am saying that the people in charge of marketing over at Vans, Volcom and Real deserve as much a cut of the SOTY pot as Walker himself. I’m also saying that skateboarding looks more and more like pro wrestling every single week. And I guess I’m also saying that Tiago, if you care bud (which hopefully you don’t) you should maybe consider changing your name to Trevor, switching from Mountain Dew to beer, and getting on Anti-Hero or something to ensure maximum visibility in coming years.