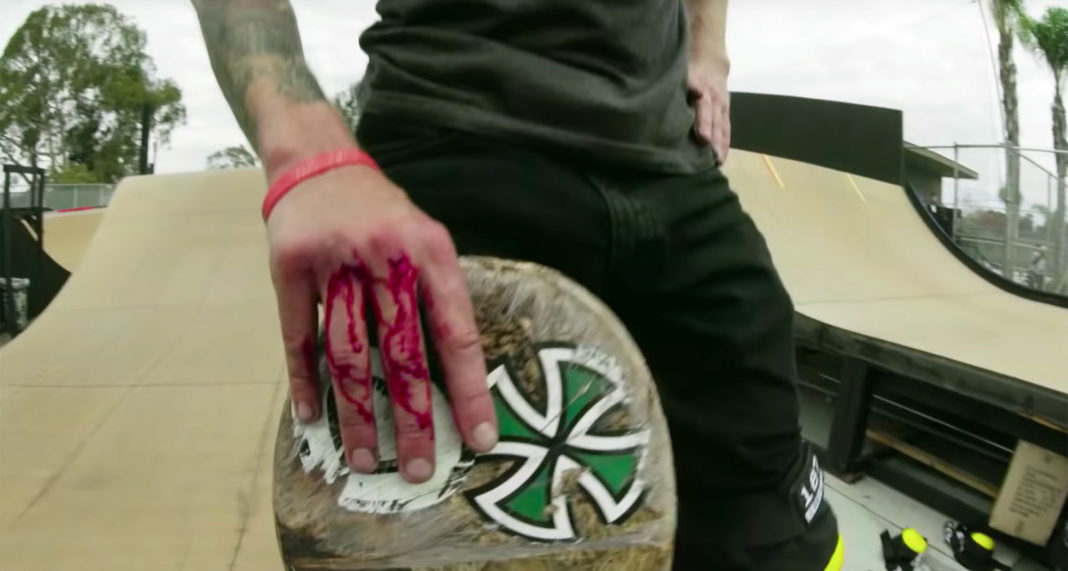 In the late ‘90s and early ‘00s, anger and frustration were a big part of skate videos.

You might see your favourite pro throwing their board around, screaming, ripping their own t-shirt, punching a nearby wall or simply stomping their board in half. Some guys obviously got angrier than others and these outbursts ranged from a candid moment of personal frustration to a psychotic, session-ending freak-out.

To witness one of these dummy spits in person is generally uncomfortable and awful, but on video they can be highly entertaining. A dummy-spit montage at the beginning of a skater’s part can provide an insight into how hard they worked and pushed themselves to film the tricks you’re about to see. It illustrates that most of the tricks flashing across the screen in mere seconds were actually hard-fought physical and mental battles that required multiple hours, days or even weeks of effort. These angry montages seem to be a thing of the past, replaced by grainy Super 8 landscapes, so here are some of the heaviest dummy spits I can remember from the skate videos of yesteryear.

AVE: The DC Video – Anthony Van Engelen has done it all, battling drugs and going sober, winning SOTY in 2015 and co-founding the cult company Fucking Awesome with Jason Dill. His career is a testament to longevity and it’s amazing how much he has achieved. He’s also battled more than his fair share of tricks, resulting in some epic dummy spits. Some of the most memorable freak-out footage came at the beginning of The DC Video in 2003, where AVE showcases a variety of ways to lose your shit. The highlight might be the kid on the bike watching as AVE violently hurls his board into a bollard. But the part that follows is even better.

Lindsey Robertson: Dying To Live – Zero videos have always had great soundtracks, heavy slam sections and a revolving door of serious skateboarders. Zero guys tend to be tough and hard and keen to jump down big stuff. When Dying To Live came out in 2002, Lindsey Robertson was relatively new to the team and initially didn’t look like he fit the Zero bill. He was a short, nerdy looking dude with glasses. On top of that, he was a heel-flipper, which was controversial enough, but then he would throw an indy grab in there, which was considered very uncool in most circles. But unquestionably, the dude stepped up to some ankle-destroying stair sets and gaps. He also had an intensity about him which was revealed in his intro to Dying to Live. It’s a montage that begins with his heavy slams and transitions to him throwing his board around and freaking out, ironically cut to a reggae song about controlling your temper, called ‘Simmer Down’. It climaxes when Lindsey truck-fucks a portable boombox, throws his board down and walks away.

Ed Templeton: This Is Skateboarding Outtakes – Being the angry guy doesn’t really suit Ed Templeton who, in addition to being one of the most influential skateboarders of all time, is a vegan, an artist and someone who has been known to cry in interviews. Ed’s a sensitive dude and a bit of an artistic genius, but he’s not immune to a good old-fashioned freak-out. While filming for 2003’s This Is Skateboarding, Ed flipped out, smacked his board into a window and it bounced back and hit him in the lip. His lip started to swell up and he told the camera, ‘So dumb… Don’t throw your board, it’s fucking stupid and then you go psycho.’

Kerry Getz: Skate More – Kerry Getz is probably one of the most well-known dummy spitters of his generation, and was described as having the temper of an ice hockey player, earning him the logical nickname, ‘Hockey Temper’. His intro in DVS’s Skate More in 2005 is a testament to his anger issues, beginning with a couple of headbutts, then moving onto an array of different board throwing manoeuvres, before climaxing with an extended montage of guttural screams of ‘Fuck’. The part that follows, however, is as upbeat and happy as they come, cut to Alphaville’s ‘Forever Young’ and showcasing some groundbreaking ledge and manny tricks.

David Gravette: KOTR 2016 – It’s been suggested that while freakouts are still probably just as common now as they were back in the early 2000s, skaters these days would prefer not to publically reveal that side of themselves. This is ostensibly why we don’t see too many angry outbursts in videos these days. With the rise of social media, skateboarders (along with everyone else) have more control over how they market themselves and it’s rare to see someone presenting their own bad temper to their followers for likes. But sometimes it seeps through. On 2016’s King of the Road, David Gravette took on the challenge of trying to air the high bar at Andy Mac’s skatepark. It wasn’t coming easy and Gravette lost his shit, screaming and punching his own board until his knuckles bled. This obviously wasn’t the only time Gravette has spat it, but the reality TV format of King of the Road was the perfect medium for showcasing it.

Bryan Herman: Chicken Bone Nowison – For this last one, let’s take a minute to acknowledge that when skateboarders spit the dummy, they usually tend to get angry at themselves. Freaking out is generally a victimless crime – but not always. This footage of Bryan Herman at the beginning of 2009’s Chicken Bone Nowison shows what happens when that anger gets taken out on an interfering security guard. It’s not a full beat-down, but he wrestles the rent-a-cop to the ground and then yells in his face pretty hectically. Hopefully, this unqualified security guard didn’t get PTSD.