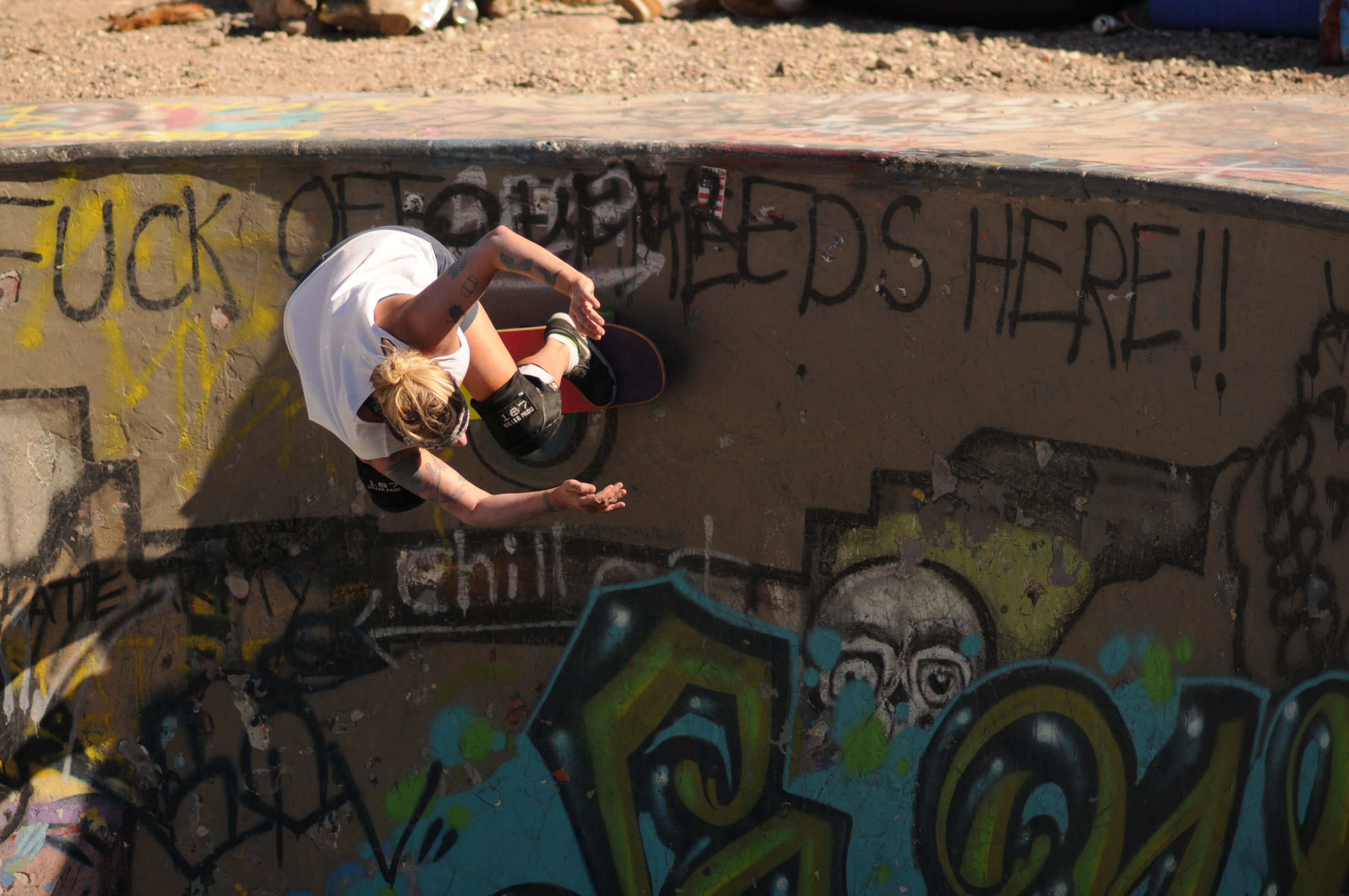 My newest skateboard deck was made by two middle-aged queer women.

It started with a friend in the DMV parking lot in San Francisco who was riding a wide, shaped board with pink checkers. He’s been skating for a while so I knew it was legit. “Gotta ride and support the queer-owned stuff,” he said to me. So back in Los Angeles I met Tara at the Garvanza Park to skate. She’s 44 and started when she was 36. She dropped into the deep end of the bowl which I’d never do. An enthusiast for all things off-kilter, gnarly, and quirky, I learned Tara is not only a skater but a comedian, a writer, and an actor. And she wears big vert knee pads. She looked sick and was able to slide out of her gnarlier carves. Note to self: get big vert knee pads.

Then we met up with Miriam, who was in town from Berkeley to bring her daughter to Harry Potter World and to see her parents. We meandered to a nearby cafe to riff. Miriam’s an artist and teacher and started a visual and performing arts school, The Arts and Humanities Academy, at Berkeley High School where she’s taught since 1995. She’s also a multi-medium artist, activist, and illustrator of the bestselling books Rad American Women A-Z and Rad Women Worldwide. That was when I learned about Miriam’s long skate history growing up in the San Pedro area, right down the street from Steve Rocco. As a young tomboy she’d kick it with him at his house where she met Mark Gonzales and Rodney Mullen.

Together, Miriam Klein Stahl and Tara Jepsen own and operate a tiny skateboard brand, Pave the Way Skates. With art by Miriam, design by a former student, and production from Los Angeles’ own Prime Wood, Pave the Way’s aim is to help create a place for queer skateboarders within the culture. I had all the backdrop I needed and dove right into asking about their history and experience in the skate world.

How long have you been skating and how did you start?

Tara: I’m 44 years old now and I started when I was 36. Years before, whenever I watched any skate video, I felt this insane yearning to skate but never made a connection in my mind that I could. I don’t know why, nobody even told me I couldn’t do it. I would look at Thrasher with my brother and four step brothers, go through and decide what gear I would get. Later, my friend started skating on her work break and she called me one day and said, “I think you’d be into this.” So I tried and I would cling to her on the sidewalk. I was so stiff and bad with my body. But it ignited me. I started going down to Embarcadero with a bunch of other padded-out nerdy ladies and we started pushing to the ferry building just to figure out how to be on a board. And it felt soooo good. It was really primal. I knew that I wanted that. So when I learned to do it it was—if I may—a healing experience. Because I wanted to do it for so fucking long!

Miriam: I grew up in the Redondo Beach/San Pedro area. For PE at school I had surf class. So I grew up surfing and skateboarding.

M: Yes, and I was a tomboy. So I gravitated towards surfing and skateboarding. It was the most creative thing you could do in the shitty suburbs of LA. And then I met Steve Rocco at the beach in the parking lot. He started giving me stuff all the time; trucks and wheels and decks. He was a lot older than us and was so incredibly nice to me. And Mark Gonzales and Rodney Mullen would always be at Steve’s house.

Any good memories of that?

M: Oh, too many. People would just fuck with Mark and be like “Ride that wall Mark,” and he’d be like, “Ok…” and try maybe 100 times before he could do it. But then he did it! It was amazing. So, I skated really hardcore as a teenager. Then I took a break because I cracked my tailbone really bad. Going down a really big hill—speed wobbles. I had to sit on a little doughnut for a really long time. Then, I got a womanly body. It sucked. By then I left LA and went to the Bay Area. It was still a kind of dead time in skateboarding. I always had a board but I definitely had a major hiatus from the late 80s till having my kid in 2007. My daughter was into it so I’m back skating every day.

Did you bring it to her? Or did she want to skate on her own?

M: Kind of both, I guess. For her fourth birthday I took her to the skate shop. She wanted to find a board with a girl’s name on it with imagery she would relate to. So she saw a Girl board, it was a Cory Kennedy, and she goes “There’s a girl!” I’m like “Sure!”

T: Better than telling her there’s no options!

M: She asks “Is Cory really good?” and I said “Yes. She’s really awesome.” I didn’t want to crush her dreams. We still have that deck. 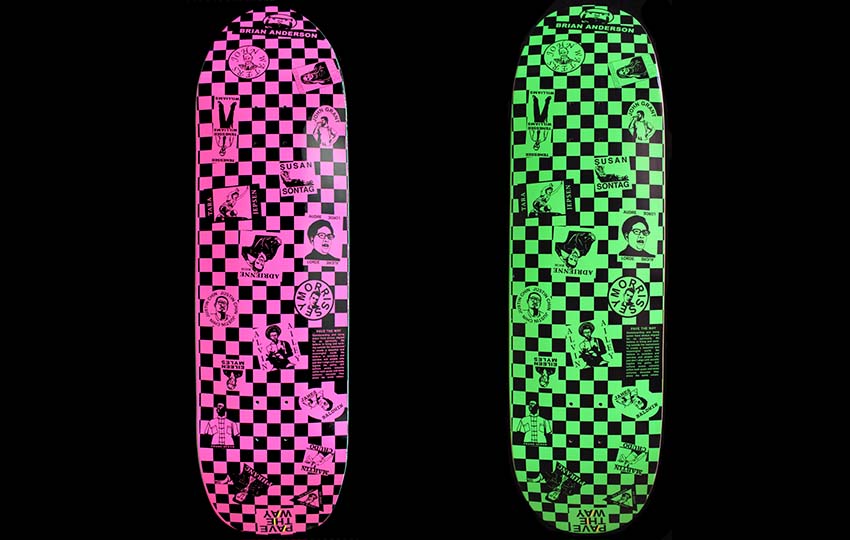 How did you two meet each other?

T:  Probably in the ‘90s, yeah? In San Francisco…probably just through being gay people in the Bay Area.

M: (laughs) Yeah. Queer punks in San Francisco. We knew each other socially. Through literature, art, music. Punk stuff. I worked at this place Epicenter. Then later through Instagram I started posting videos of my kid at the skatepark and then my friends would tag Tara. I feel like anything that has to do with skateboarding within our community gets funnelled to her.

T: I think because of queer people being very outside of skateboarding, or at least at the fringes, I’m very outspoken about that being something that I love to do. I want to put as many images as queer people and women skateboarding as I can. And, specifically, living it. Not being a pro, not the most gnarly tricks. Also showing that there are a lot of ways to be a middle-aged woman. It’s such an ignored and diminished way to be in the world. I think of it as, like…two people passing each other in Corvettes, giving a little nod.

M: Me too! You’re an ambassador.

How did Pave the Way start?

M: When my first book came out we talked a few times and I think that you [Tara] mentioned that these women [from Miriam’s book Rad American Women A-Z] would be awesome on the bottom of a skateboard. And I think that was kind of the seed for it. That was two years ago.

T: It’s evolved so easily and naturally. We started tossing the idea around and then moved into the next thing. It was so low-stress.

M: I think Brian Anderson coming out kind of gave us a focus as well. And thinking about my students, some of which are queer kids, having a way to truly be themselves within the skateboarding world. I thought it’d be brilliant to have these decks be at a skatepark and have all of these queer people on a board. And also it just kind of tickled us. It was funny to have Tennessee Williams or James Baldwin on a board and be a part of skateboarding. It cracked me up. If they had a board like this when I was a kid I would’ve been so psyched. It’d be amazing.

What did you think of that Reda Vice piece about Brian Anderson’s coming out? I’ve talked with a lot of people about it but not any queer skateboarders.

T: It was an awesome thing to do. I will say that it was definitely made to translate him to a straighter, prejudice world, though.

M: And capitalist world! “How can we still sell a shit ton of skateboards?”

T: It’s Reda trying to put that story through his filter. It’s not gonna inspire the shit out of anybody who are already comfortable gay people. Well, I don’t know, maybe it would. But I was happy to see a lot of follow-up articles, some of which mentioned the advice at the end to “keep yourself a secret” is kind of bullshit. It wasn’t an empowering message that he sent, ultimately.

M:  I think it’s great that it came out too for young skaters that don’t even have a language to talk about queerness. If this is the thing that gets them to talk about that then that’s great. Or if this is what inspires a kid to not be a dick to another kid at the skatepark: great. Some skateboarders I’ve encountered feel personally defensive about it. Because they’re not homophobic, they don’t think skateboarding is.

So this BA movie created a kind “moment” that sort of lit a fire under you. What were the next steps?

M: Yeah, we definitely wanted to help try and extend that moment. I just started making a bunch of art and asked a former student of mine to design the deck. I gave her all my paper cuts.

T: She did the whole design – the layout, the fonts, the checkers.

Where did you get them printed?

T: I brought my friend Jacob into it, then. He works at Prime, a skateboard manufacturing company here in Los Angeles. We made a small run and just wanted to see how it goes.

M: We got to go and check out the shop and talk about shapes and sizes. So many decks are made in China or Mexico, so it was really cool. It meant a lot to us to have them made here in California.

You have an online store. Where do you sell them otherwise?

M: I have half of them and Tara has half of them. I brought a couple to 510 skate shop in Berkeley. And then the Berkeley Art Museum wanted some of them for display.

T:  We’re not really taking them to too many shops. It’s a small run, so only ones that we know are really down with it. We’re not really trying to explain ourselves and be a part of the small-company-trying-to-get-space-on-the-wall thing. I brought some to Kingswell in Los Feliz.

So what’s the plan with this? The industry needs more stuff like this.

M: Well, I teach full time and have book deadlines. I view this as a really fun project that we get to collaborate on. We want to make our initial money back. If we do make our money back and then make extra to be able to do another run I’d be totally psyched on that. But I don’t want to spend time hustling skateboards.

T: That’s the thing!  It really just rests on us and we’re both doing a million other things. We did this specifically knowing we could settle with however it goes.

M: I can’t tell you the joy I have of riding that deck. I ride it to work every day. I never dreamed I’d be able to print my own skateboards when I was a kid. It’s a total dream come true.