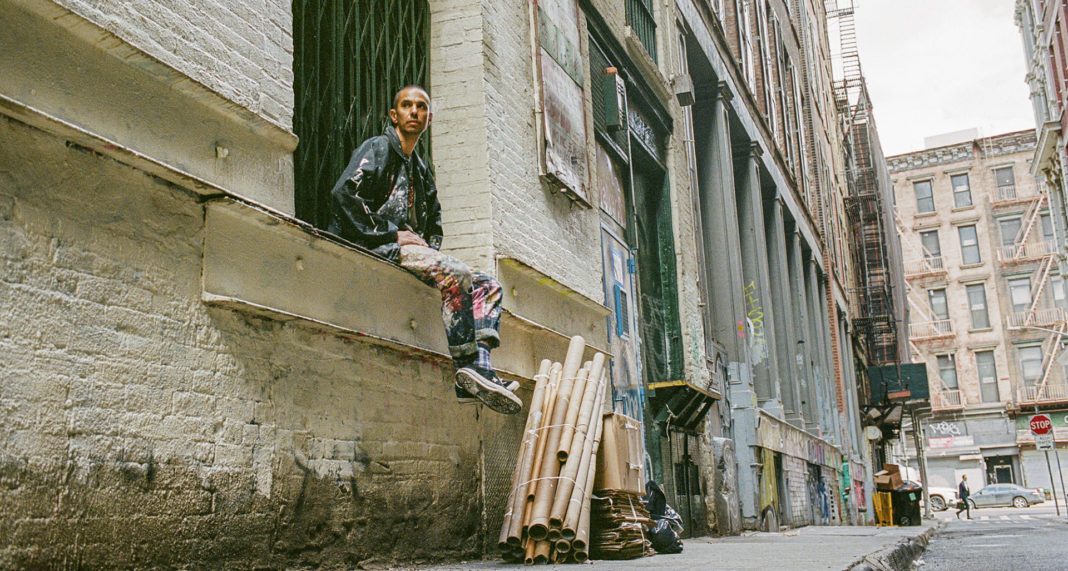 Making the leap from the street to the gallery is no easy task for an artist.

It’s been done, of course (Basquiat, Haring, McGee, etc), but the work that goes into making that transition—unless you’re lucky enough to be plucked off the street by Andy Warhol—can’t be understated. One of the more recent artists to make the migration is New York’s João Salomão. As the graffiti artist PIXOTE, João found his visual voice and established himself as a respected figure in the scene—but now he’s creating work for the gallery space, and we had a chat with him about it.

You moved to New York in the ’90s. I’m curious to know what it was like back then. What are your memories of that time?

I was born in Rio de Janeiro, Brazil, and moved to NY with my mom when I was 15 years old. Straight to the Lower East Side where it was still very raw and dangerous with lots of Latin gangs. I was into skateboarding and punk and hardcore music. It was a perfect time in NY. I used to skateboard with all the downtown kids and got all the Supreme gear for free (ha-ha). We would go to all the hardcore shows at Wetlands, CBGB’s, Coney Island High, and also, somehow, to some pretty crazy upscale parties. Harry Jumonji (old school skate legend) taught me to turn my jacket backward to skate because it would get dirty and then turn back to normal to go to the parties. 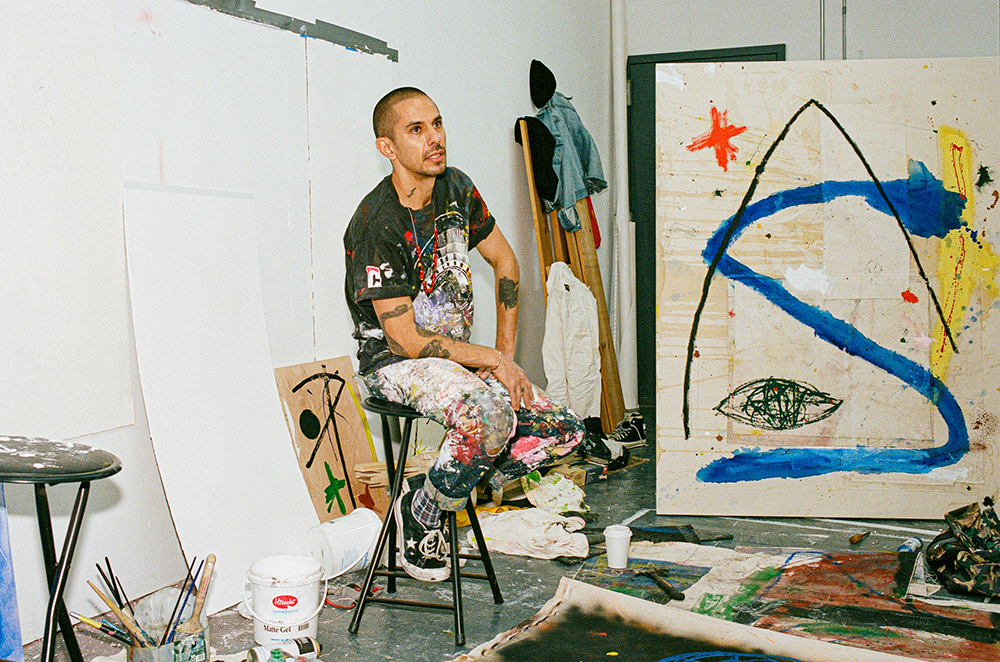 Were you making art in Brazil or did you get started in NYC?

My first art form was music. I started playing guitar when I was 7 years old. My whole life revolved around music: playing, touring, and recording until I got tired of bands and the business side. I was always struggling to make money. Around the mid-2000s, I entered the graffiti world with the name ‘PIXOTE’. To me, it was a way to express myself and grow as an individual, and I built something really powerful and fearless in my life that eventually opened the doors to visual arts. 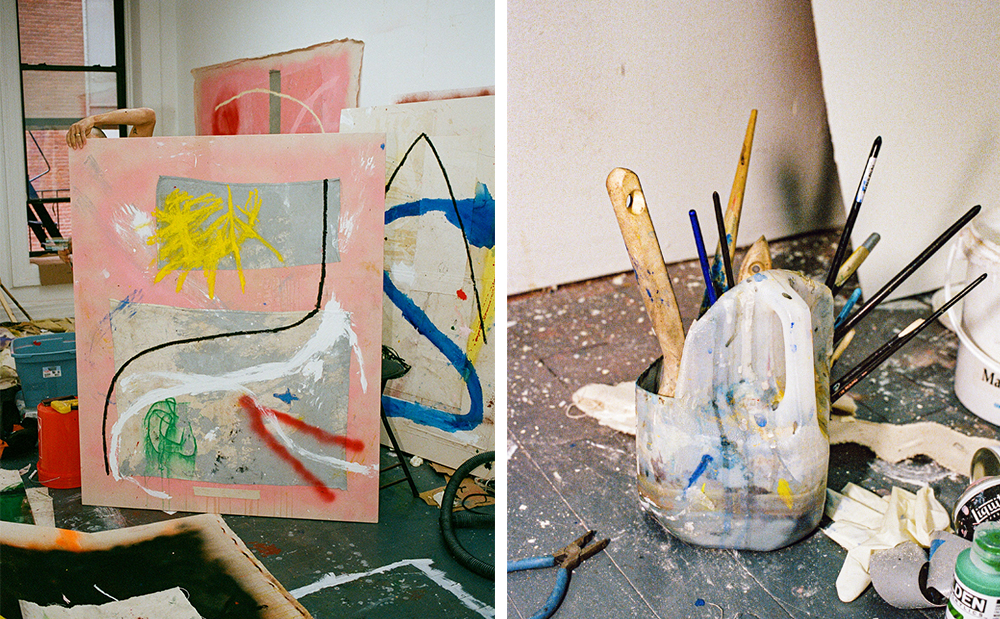 How and when did you make the transition from graffiti artist to showing in galleries?

Around 2012 I got offered a solo exhibition because of my graffiti. It was hard not to see my tags all over the city because I used a distinct style called Pixação from my home country. I would cover the highest place of a building side to side with big rollers and a gallon of paint. I wasn’t formally making art yet, but I would collect found objects, paint them, and I turned them into sculptures for this exhibition. 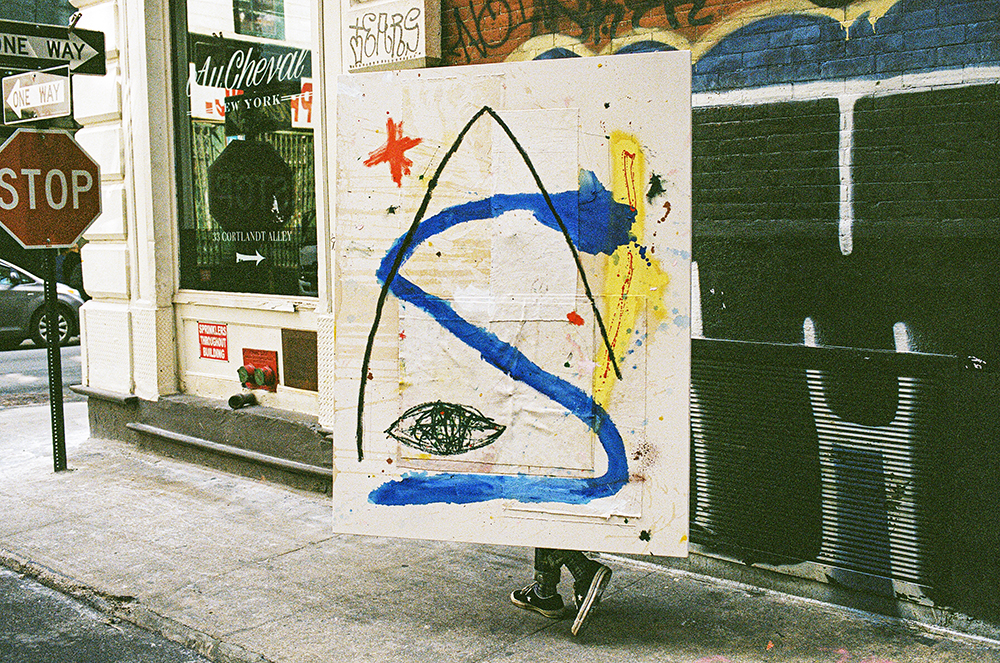 Your work seems to contain a lot of interesting symbols and stuff. Do they have meaning and are you telling a story through the work?

I like to leave room for the imagination of the viewer. I use a good amount of symbols, taking from Afro-Brazilian spirituality and Pixação and changing them around to make them my own. My work is about life, its duality, its mystery, and the unknown, and from that, I try to evoke some kind of personal awakening.

Do you have a methodology that you adhere to when creating new work?

It’s very open and free. I let the paint guide the way, especially in the beginning. I splash coffee stains on an unprimed canvas to break the ice, then I paint and collage canvas on canvas very freely. A lot of meditation goes into it too. I sit back and stare at the paintings for sooo long, and I play a lot of music to really vibe with it all. They are like wine aging until they develop a life of their own. Towards the end, I add lines, symbols, and shapes that are part of my art vocabulary. They are kind of hieroglyphics, inspired by primitive civilizations that carry sacred information and energy. 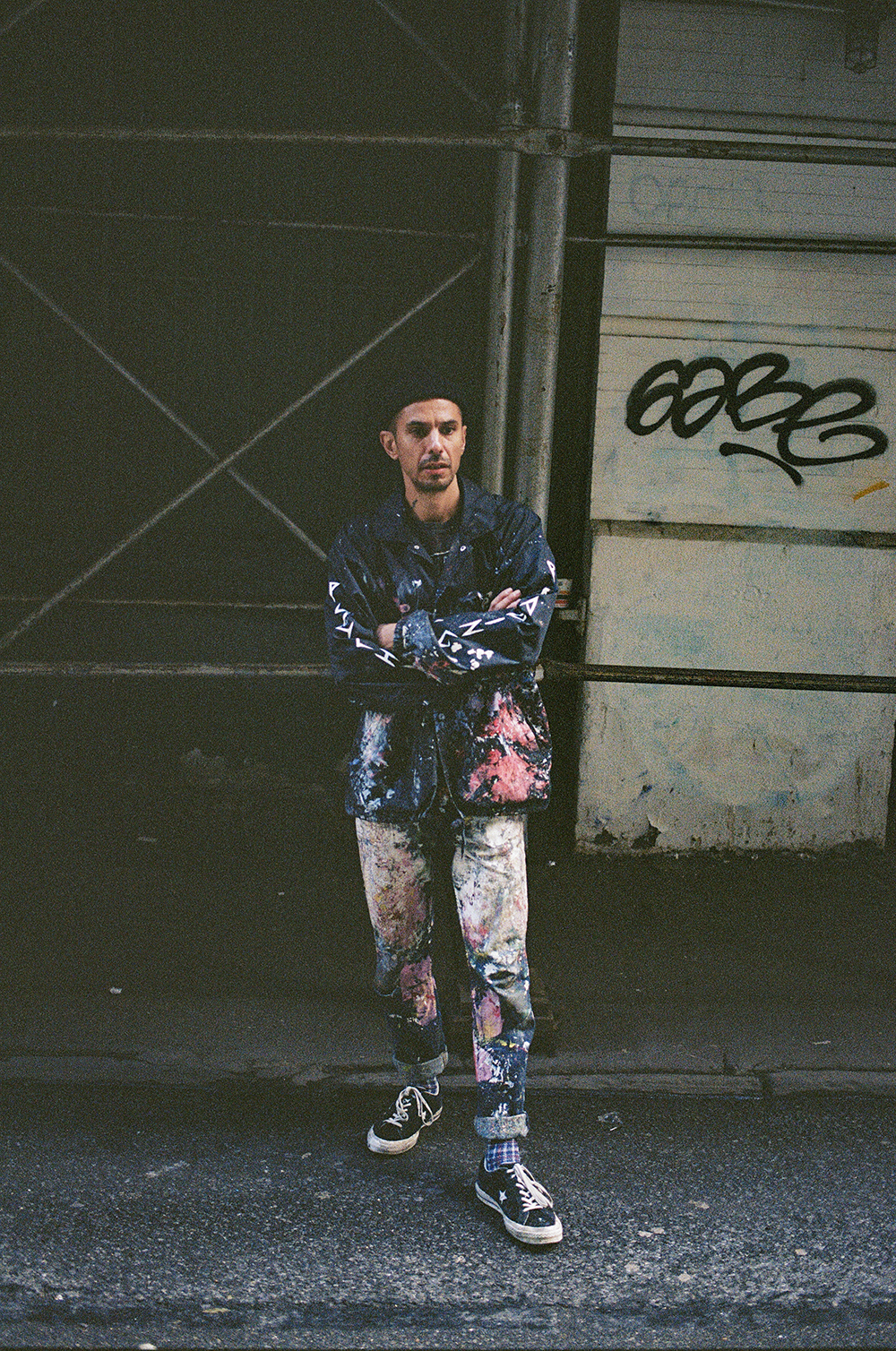 What’s the highlight of making new work for you, the moment where you think, ‘Yep. That’s why I do this’?

I feel like an alchemist, working with energy more than painting (ha-ha); balancing colors shapes, and lines. I think the most important aspect of painting is FREEDOM for me—splashing a bucket of paint on a canvas or leaving a bunch of stains drying in the studio until the next day, so it’s a surprise. I wrote this phrase about my work one day in my notes: ‘My notion of painting has to do with freedom. I find opportunities everywhere, and I let the painting lead the way. I think of paintings as poems, they are visual poems; they dance, they feel. They are living, they are alive, and are a mirror for oneself to expand one’s mind.’ 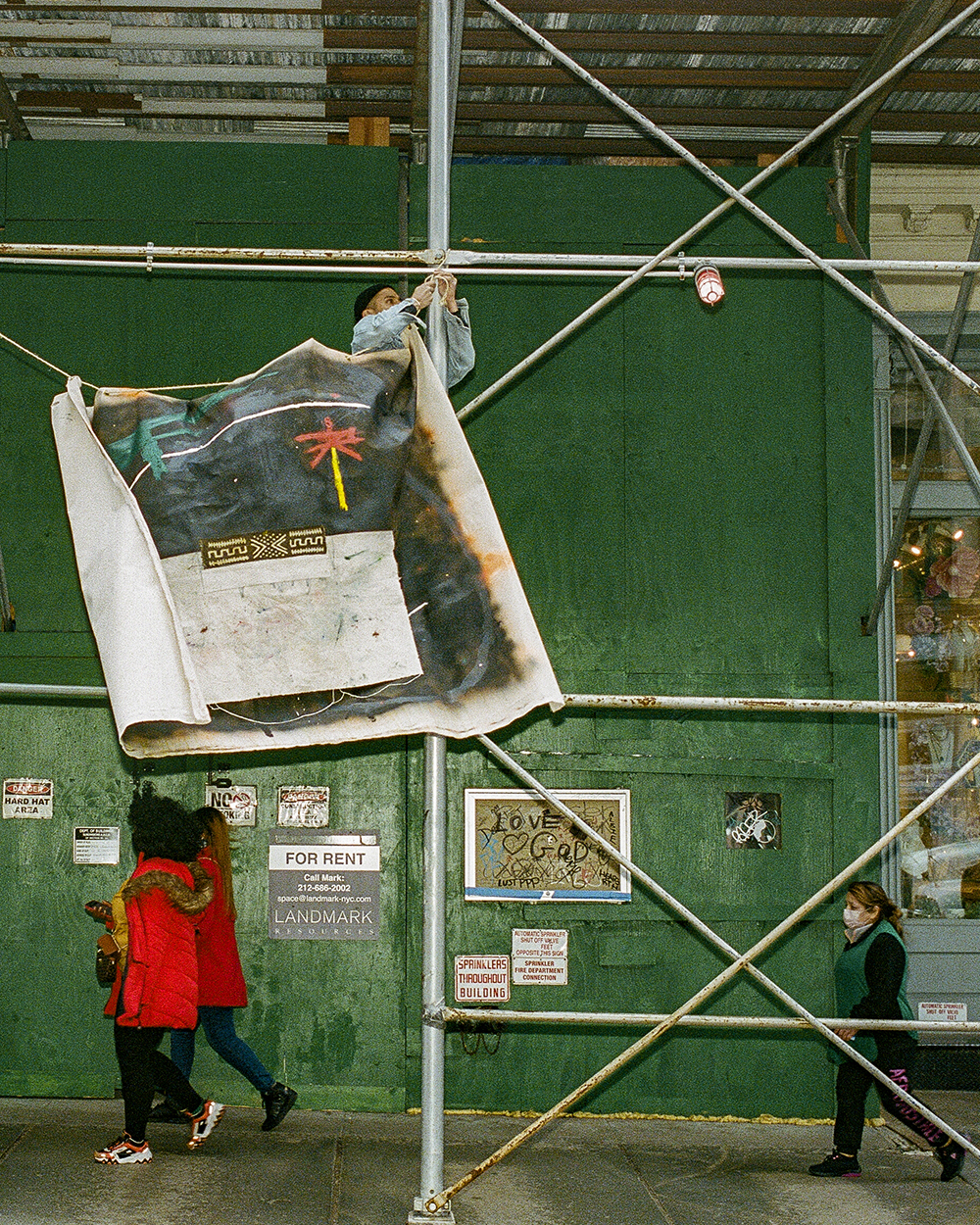 Who or what do you look to for inspiration in your work?

I look at life in general; the street textures, sounds and music, poetry, primitive cultures, and spirituality. I look at the human connection and all its complex and simple beauty through my work. Through my paintings I want the viewer to be able to meditate on and find their own psychic visions.

What do you listen to while you work?

I listen to a lot of different music, sometimes I dig into the Brazilian Tropicalia, like old Caetano Veloso and Jorge Ben, but other days I love some post-punk sounds like Gang Of Four. l also love old forgotten world music, like Arabic funk, West African blues, and so on. 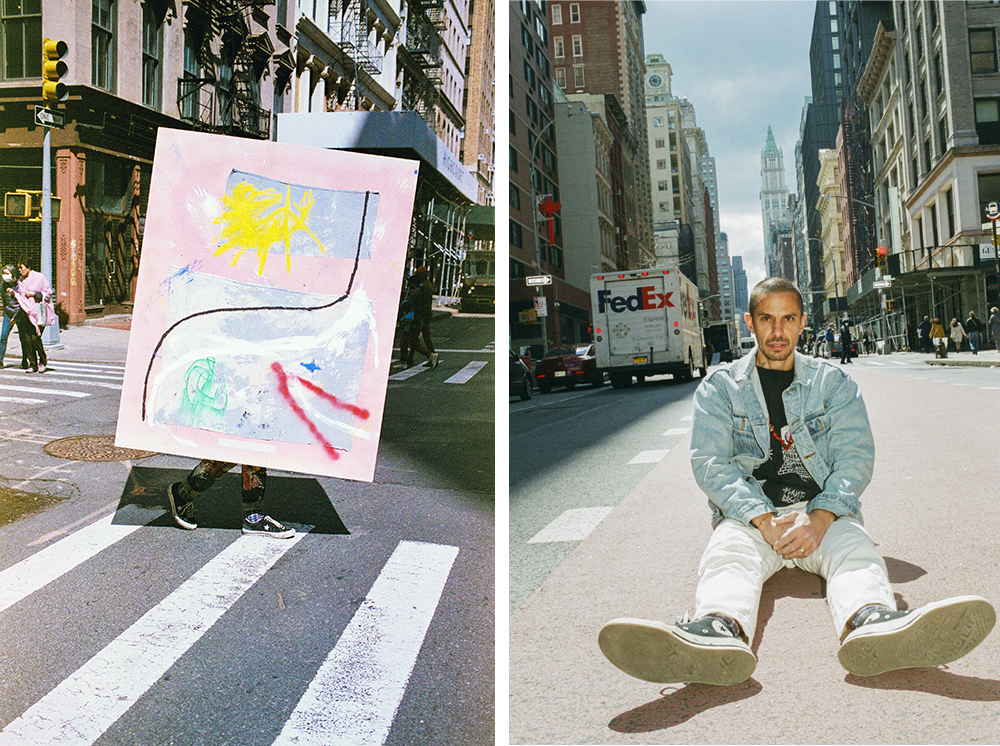 Is there an optimal time of day for you where you feel like you can get into that flow state while working?

I love this quote by Picasso: ‘Inspiration exists, but it has to find you working.’ I believe that in the process of working, beautiful things will appear. For me, I work a lot with my instincts rather than with a plan. I am very much a morning person. I love waking up to a fresh new day. I spend the morning making breakfast for my daughter—who is one-and-a-half—so my wife gets an extra hour of sleep. She’s at the cutest age (my daughter); we bought her an easel already, and she loves cresting sketches with me every morning. Then I get my coffee and skate to the studio around 10:30 am. I love to check in with random people on the streets, and see how they are doing; sometimes they look at me like, ‘Who is this crazy guy?’ But it’s New York, and all the old-school people really appreciate the human connection. I also love to sing out loud on the streets and spread some positive vibes—that could also be interpreted as crazy, now that I think about it. 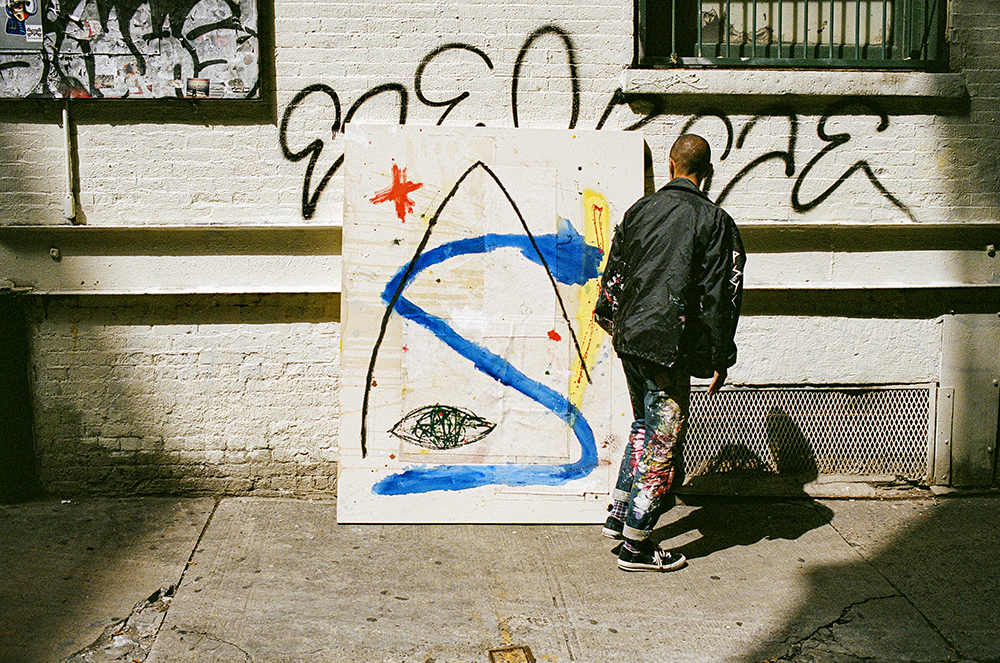 As an artist, what’s the biggest lesson you’ve learned along the way?

Well, not only as an artist but in whatever you do: it’s important to know how to surf in life. Sometimes you will get big waves and sometimes nothing, but you have to keep it cool and calm, like the buddhist practice of equanimity.

What’s next for João Salomão?

I am working on a new series of large-scale paintings that I’m excited to show in an upcoming exhibition. Besides art, I just want to continue spreading joy to people and contributing positivity to the world—that will always be my mission. 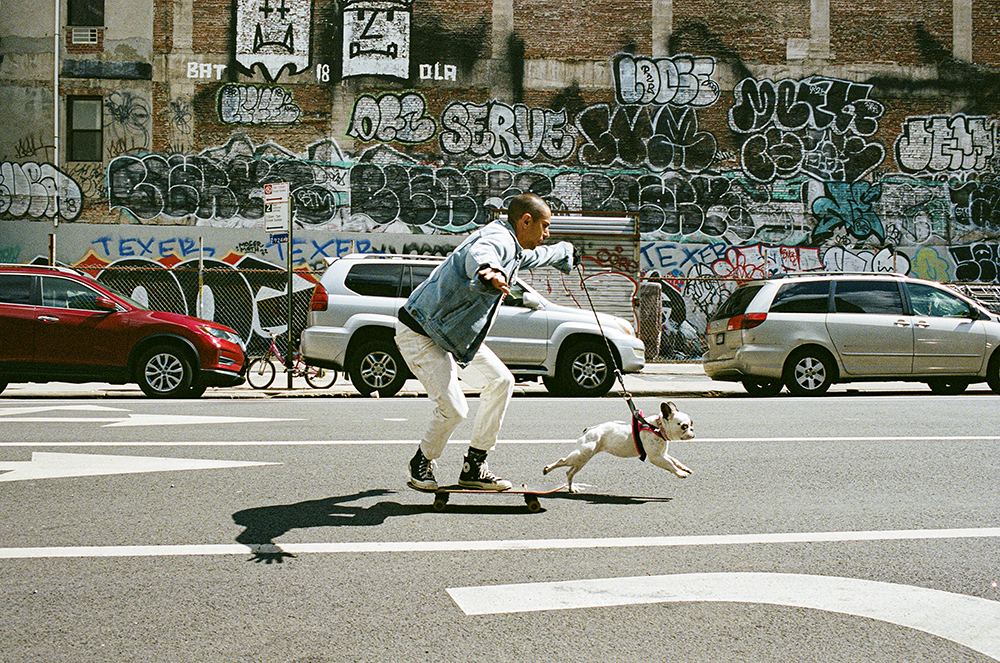