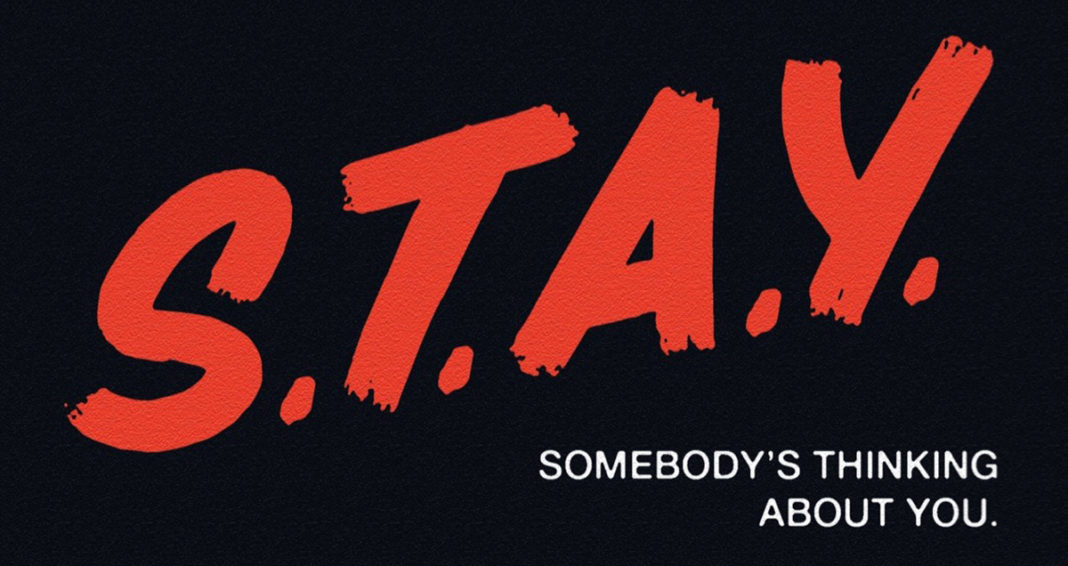 If you’re a citizen of planet Earth, you’ve more than likely been touched by suicide.

When I was in high school, a kid named Rob who took his own life, and at the time, it made no sense to me or any of my fellow students. Rob had it all. He was funny, intelligent, supernaturally good-looking (the girls were absolutely obsessed), creative, generous, and so good-natured he made the Dalai Lama look like a bit of an asshole. Everyone—the nerds, the jocks, the teachers, the whole school—loved Rob. And he committed suicide. Evidently, there was something going on inside Rob, but he didn’t dare tell anyone. If he had told someone, he’d still be with us. 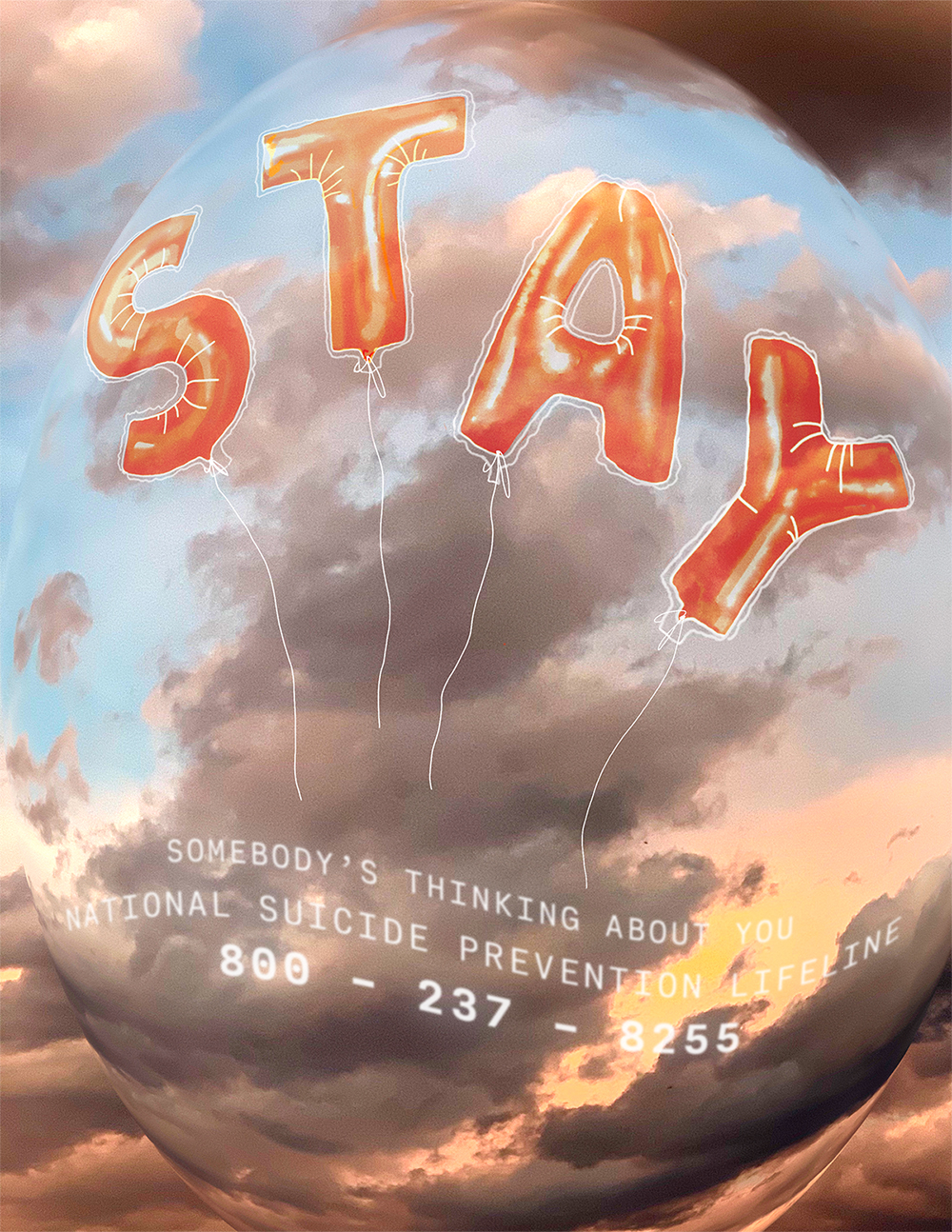 Fortunately, times have changed, and the stigma around mental health has shifted. But the stigma attached to suicidal ideation hasn’t shifted enough, and this is especially true in the action sports arena, where appearing cool, calm, and collected is part of the gig. That’s where S.T.A.Y. comes in. We spoke with S.T.A.Y. – Somebody’s Thinking About You founder Desiree Melancon. 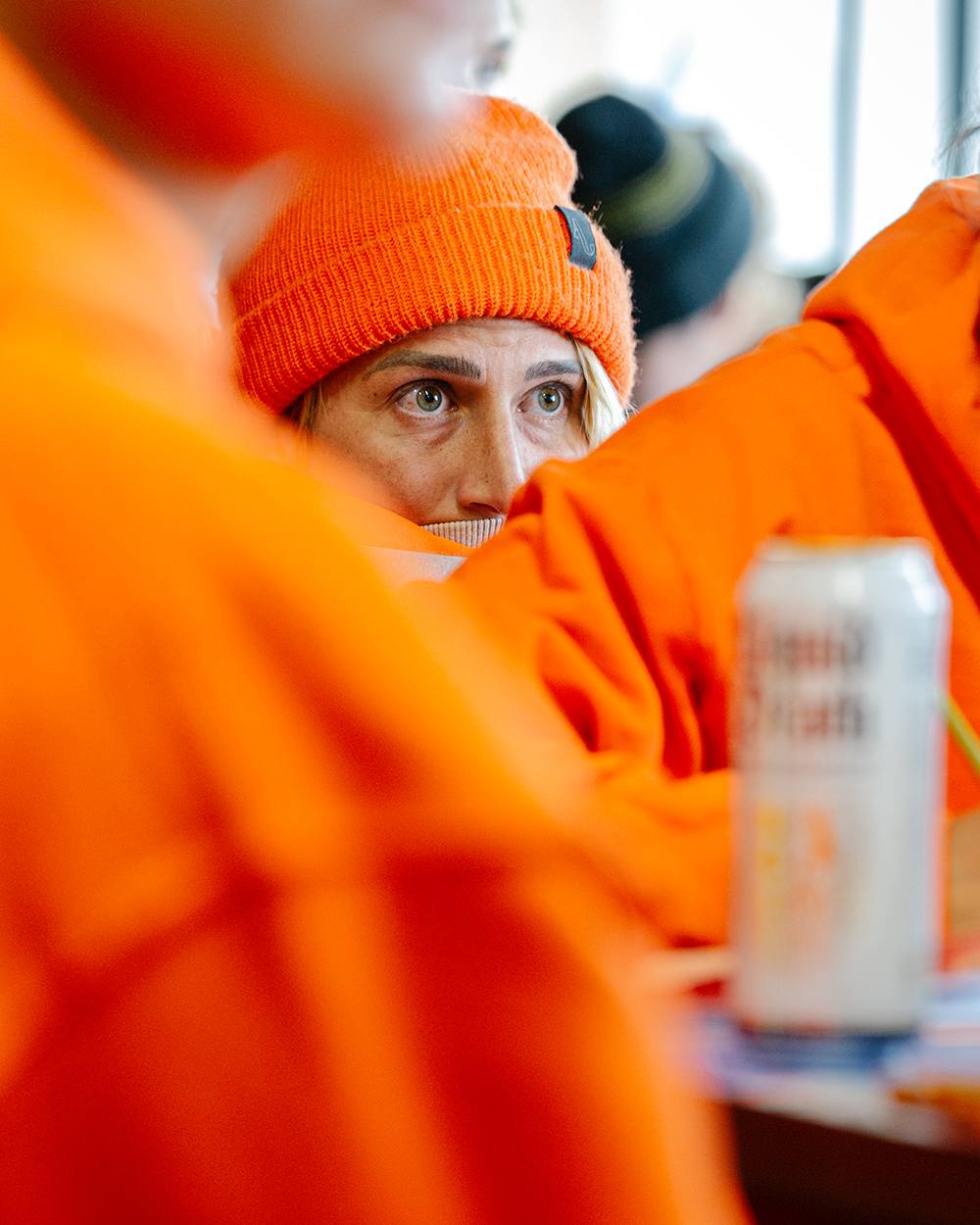 S.T.A.Y. was born out of a culmination of a lot of things, but personal experience is really at the forefront. Those of us involved in bringing this to life have dealt with debilitating depression and suicidal ideation for decades, and we’ve been watching our friends, acquaintances, and strangers tragically disappear, one after the other, all that time. It began with intimate conversations between two of us, then impromptu backyard tell-alls with more friends. We all found that when we show up for each other with empathy, curiosity, an open mind, and a generous dose of commiseration, these conversations don’t have to be the tragic spiral we’re afraid they might turn into. Discussing these experiences is therapeutic, validating, and encouraging. It’s become common knowledge that access to resources, or rather lack thereof, is a complex and systemic problem; you can’t just walk into a doctor’s office and walk out feeling better. Oftentimes people want to get help, but the process is so convoluted and prohibitive that they defer their own care. Combine that with an intense, deep-rooted stigma surrounding asking for help or seeking treatment, especially within the ‘cool’ sports communities, and you’ve got a recipe for a mental health crisis. So, we chose to do something. 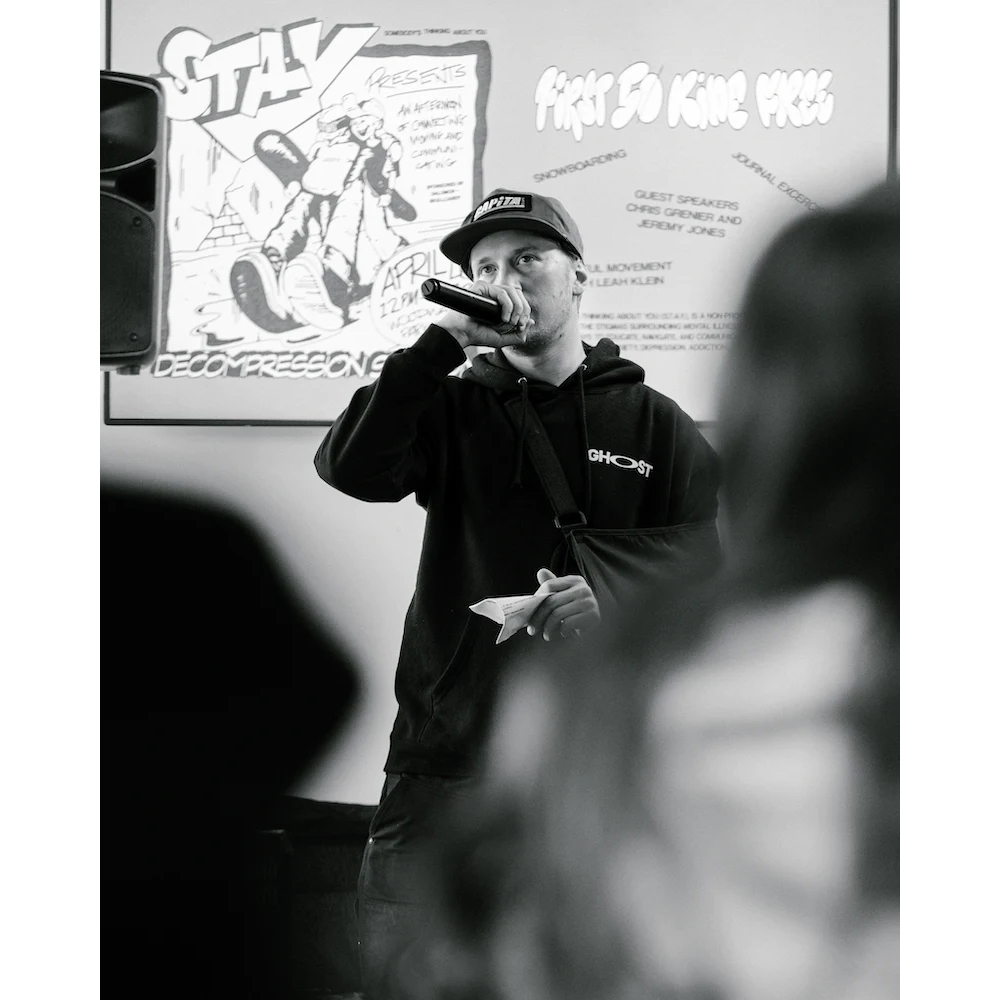 The individuals behind the logistics of S.T.A.Y. are Cheyne Brooking (Co-founder/Art Director), Nate Farrell (Executive Director), and myself (Desiree Melancon: founder). In addition to that, we have a Board of Directors that we are really grateful for, and a small team of volunteers who help us accomplish various initiatives like events. At this stage, our primary focus has been within the snowboarding space simply because we have relatively easy access to that community, but that isn’t the case for our sister sports. With that being said, we acknowledge that we have a long way to go in fulfilling the ‘action sport’ demographics, and we are reaching out to individuals and partners who exist outside of snowboarding—especially in skate, surf, and ski—who may be interested in working with S.T.A.Y. Please reach out to us if this is you.

And what does S.T.A.Y. – Somebody’s Thinking About You, do?

We are still in our infancy, but we do have lofty ambitions. S.T.A.Y.- Somebody’s Thinking About You is a non-profit coalition dedicated to fighting the stigmas surrounding mental illness in Action Sports by providing ways to educate, navigate, communicate and commiserate all things relating but not limited to anxiety, depression, grief, esteem, addiction, self-harm, suicide ideation, and suicide itself.

We combat the stigma surrounding mental health issues via our media partners and through our social media platforms by highlighting art that conveys a message, and always contains the suicide crisis hotline number, 988. Coinciding with this, we have been launching event initiatives called ‘Decompression Sessions’. These events feature guest speakers, mental health and mindfulness activities, and, wherever possible, time spent engaged in the sports we love by creating connections and building relationships with fellow boarders. We are hoping to hold around 5 Decompression Sessions this year and grow from there. Finally, this overlaps with our current social media campaign efforts to spread the message that ‘athletes’ deal with mental health issues just like everyone else, and that it’s ok to talk about it. 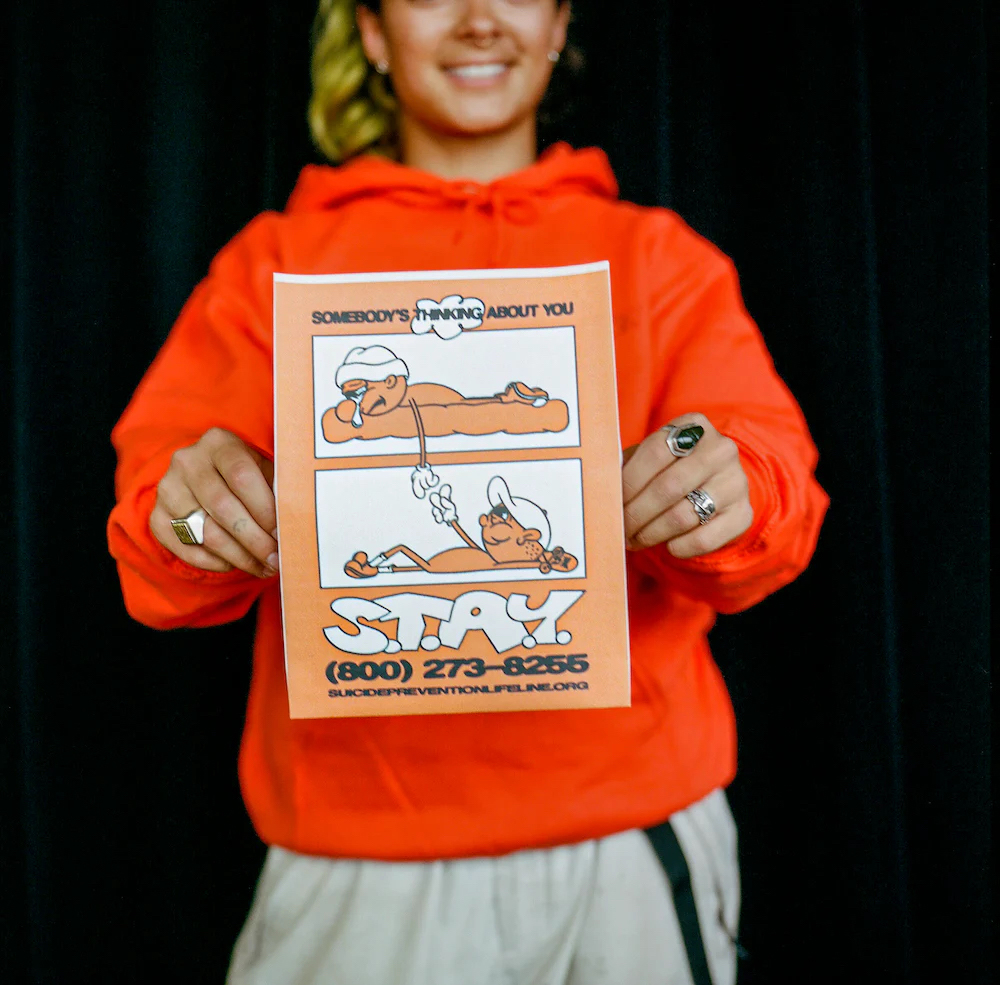 Ultimately, our goal is to validate and destigmatize these difficult thoughts and feelings. They are a daily reality that so many of us struggle with. When we confront them in supportive spaces, we can start to view them less as looming, shameful monstrosities, and instead begin to be curious, kind, and patient with ourselves as we move through them to the other side. Of course, we need structure and resources to do this effectively.

Long-term goals encompass being able to provide tangible resources, it is a dream to actually be able to connect individuals in need directly with competent therapists who can relate to our demographic constituents or beneficiary’s needs. From there we have every intention of expanding to public-school systems and universities, and eventually finding ways to aid in the efforts to make mental health a focus in preliminary education.

Do you think issues around mental health are stigmatized more in action sports than in other spheres?

While elite action sport athletes may be viewed as ‘superhuman’ by their fans and followers, they are just as susceptible to mental health challenges as anyone else. It can be difficult for high-profile athletes to speak up when they’re struggling because of a perceived expectation to not appear ‘weak’ or ‘negative.’ Whereas both action sports athletes and enthusiasts can often face a unique pressure to pretend that they feel happy all of the time in order to maintain the desired image that the culture demands of them. Fortunately, the era of Toxic Positivity is starting to shift, as more action sports participants and athletes are choosing to speak up and normalize mental health issues. Mental health issues like depression, anxiety, and addiction… they don’t care who you are or what you have accomplished, everyone is susceptible.

Has the pandemic had an effect on mental health and suicide stats?

Yes. Since this pandemic began, people have generally reported higher rates of mental health issues including depression, anxiety, and substance abuse, but suicide rates actually decreased by 3% from 2019 to 2020. While there is still debate about why suicide rates have gone down slightly, one possible factor could be the rapid increase in access to mental healthcare with the surge of telehealth during the pandemic. Of course, the caveat to these stats is that they are based on reported instances, and given the lingering perceived stigma around this issue, the true numbers are likely higher. Also, statistics from 2021-2022 are not accessible as of yet.

What demographic is most at-risk?

White men are disproportionately impacted by suicide in comparison to other populations, accounting for nearly 70% of all suicides in the US in 2020. People with access to lethal means including firearms are at much higher risk as well. Additionally, LGBTQ+ youth are more than 4 times as likely to attempt suicide than their peers. 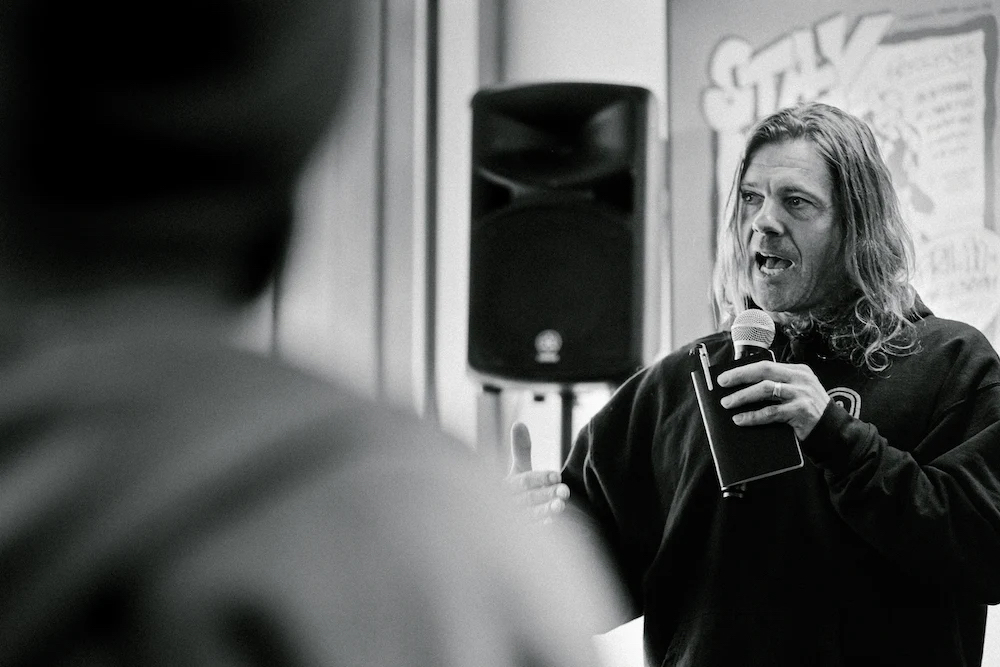 What signs should we look out for in our friends who might be struggling with their mental health?

Isolating and withdrawing from friends and activities can be a sign that someone is feeling depressed or suicidal. If you notice that a friend has been silent in group chats and not showing up to events or the skate park like they normally would, it can be helpful to reach out and let them know that you miss them.

Other warning signs include being uncharacteristically moody, sad, angry, or if they suddenly seem calm after a period of depression. The calmness can be an indication that they have decided to end their life. Also, be on the lookout for self-destructive behavior like reckless driving and excessive drug and alcohol use, or changes in their physical appearance that might indicate a lack of caring for themselves. These signs can also be symptoms of trauma like being the victim of abuse or of personal loss which of course has an impact on mental health. 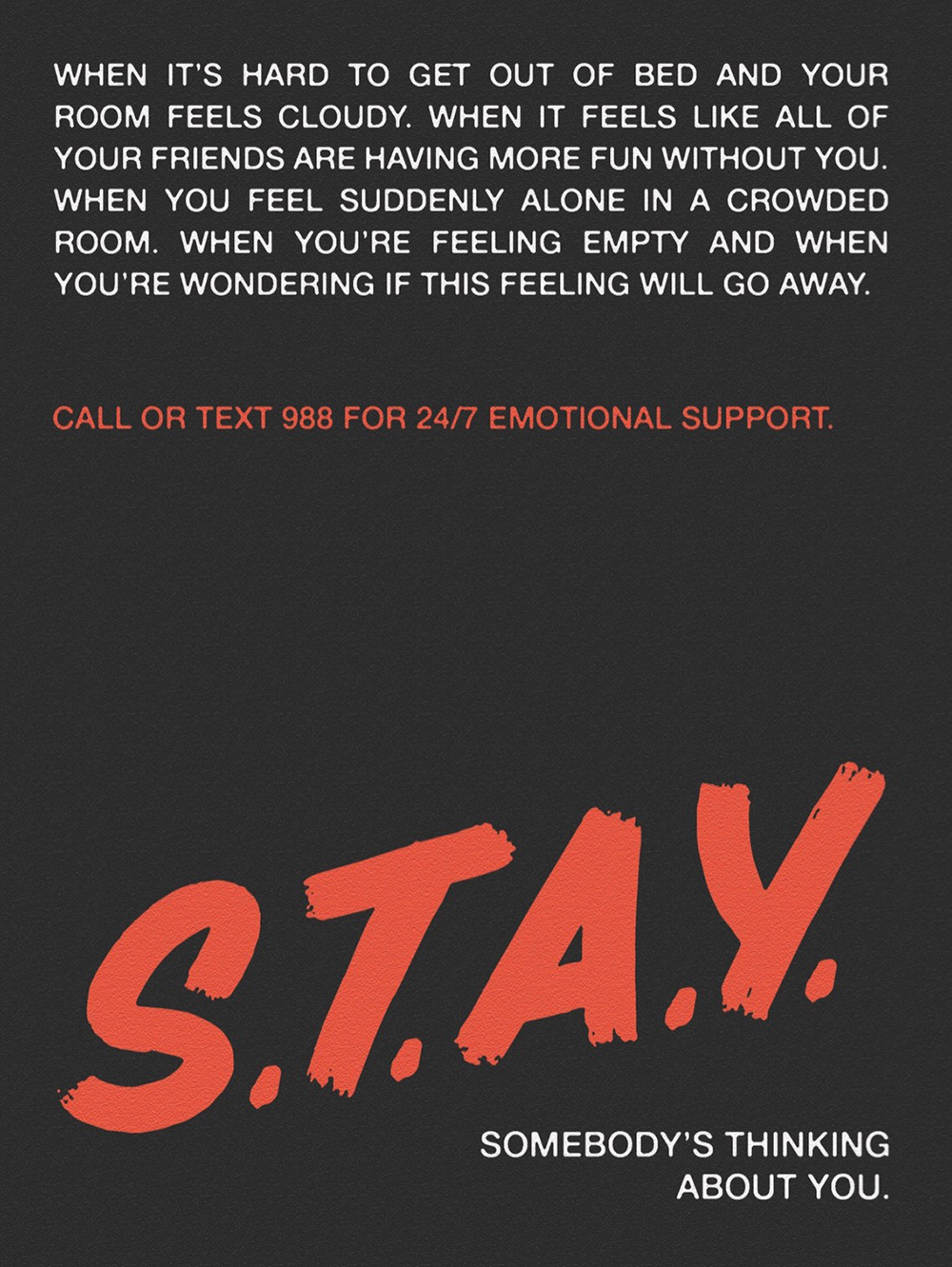 What should we do if we’re worried about a friend?

First and foremost, don’t put pressure on yourself. It is not your job as a friend to solve their problems or even give advice. It’s also not your job to ‘save’ them. The most helpful thing you can do is to just listen and be there, show up for them.

Here are a few tips for active listening and showing that you care:

• Ask open-ended questions and be careful to let them finish answering before jumping in.
• Make eye contact.
• Reflect back what you heard them say in order to show that you understand where they are coming from.
• Try labeling their feelings (eg: ‘Sounds like you’re feeling pretty hopeless and stuck.’)
• Validate their experience. Let them know that however they are feeling, it is okay to feel that way and they are not alone.
• Offer compassionate statements like, ‘You mean so much to me and I am so sorry that you are going through this’ or ‘I can’t imagine life without you in it.’
• If they are hinting that they are feeling suicidal, ask them about it directly. This can help normalize the thoughts they are having and reduce the shame that they may be feeling about it. Let them know that you want them to stay, and why. Then, give them resources like 988, or offer to help them make an appointment to talk to a professional.
• Keep checking in with them regularly after this initial conversation. It can mean the world to someone and make a huge difference to know that their friends are still thinking about them when they are apart.

To get involved or to assist in the S.T.A.Y. fundraising effort, click here. If you’re in Australia and need to talk with someone, contact Beyond Blue on 1300 22 4636, or visit their website.

A post shared by Somebodys Thinking About You (@somebodysthinkingaboutyou)