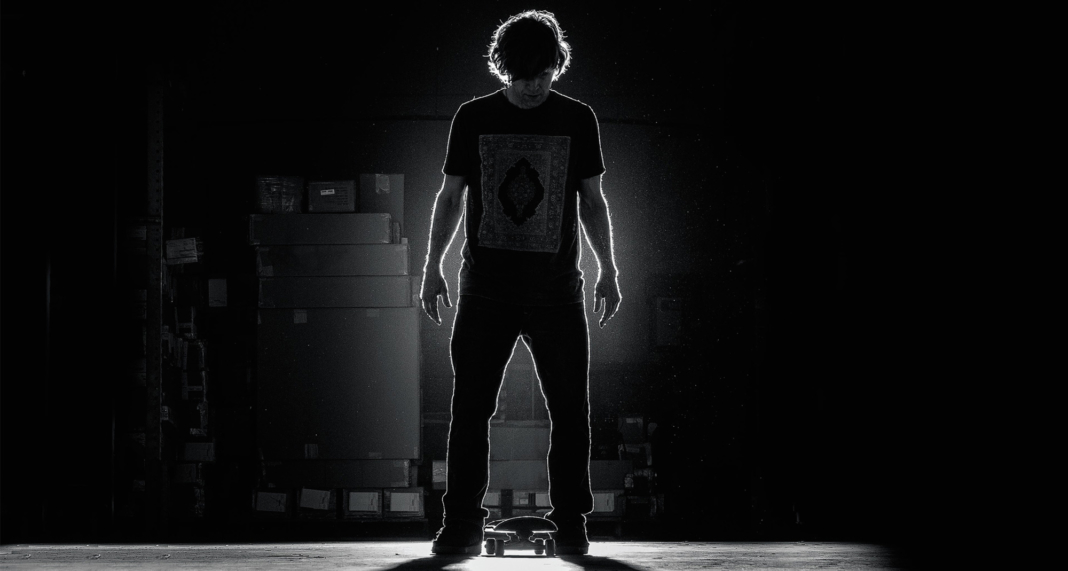 Rodney Mullen has a good story about Tony Hawk asking him to be a character in the Tony Hawk Pro Skater game franchise.

Rodney had just come back from an Enjoi tour in Chicago where he broke his ankle at a demo. He was in his mid-30s, which is old enough for a big injury to end your career as a pro skater, and he was worried. He was thinking, ‘Should I quit skating?’ So he got in touch with Tony Hawk, who has been a close friend since they were kids. It was around the year 2000 and Tony was already the most famous skater in the world: he’d done the 900 and released the first iteration of the THPS game; Rodney had recently seen Tony on TV at the Academy Awards. 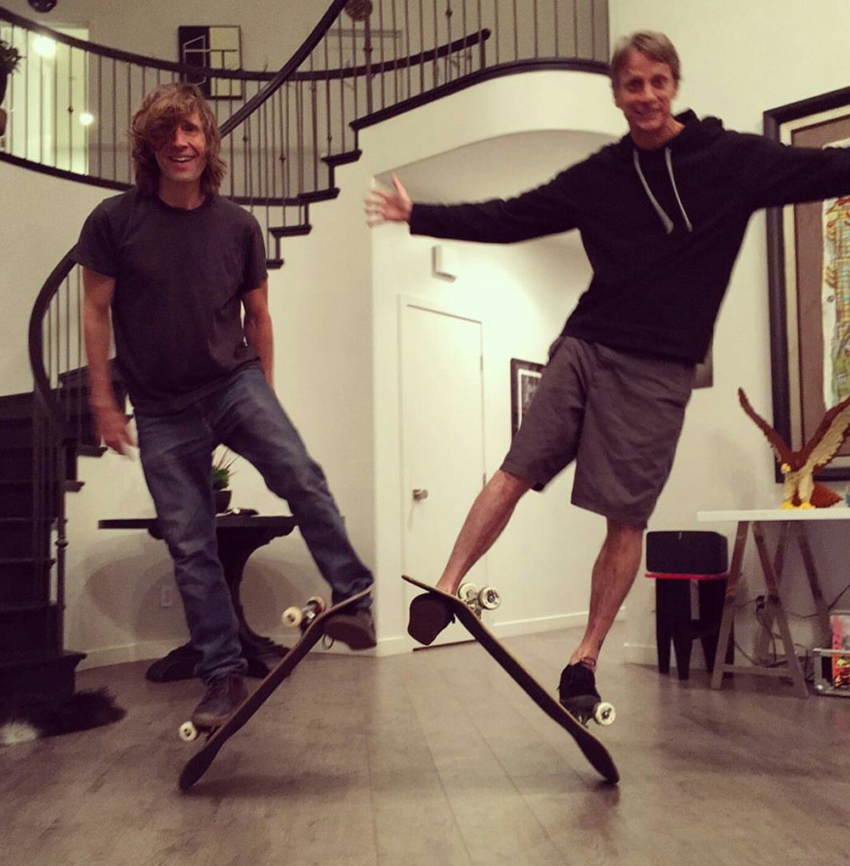 The pair met at a restaurant and Rodney says Tony walked in ‘like a star’ and was getting recognised by other people. ‘I remember seeing him and thinking he’d be different, but he was always exactly the same dude: humble, down to earth, real.’ Rodney was worried about his ankle and his future career prospects, but Tony dismissed his concerns and told him it would heal. ‘And by the way,’ he said, ‘do you want to be in my game?’

‘I had no idea of the significance of it, I was just stoked that he was bringing me in like that,’ says Rodney. ‘That was what was of significance to me, and weirdly, that’s still what I hold onto. Since Tony’s had the game, he’s treated me like gold. The thing I love about Tony is that he represents us. He still stays close to skateboarding and he sort of lives in this other world that none of us can really access, in terms of being that guy you see on TV.’

Rodney tells me this story on a slightly delayed phone line from his home in Southern California, but it’s a story he has told before—most recently in a new documentary called Pretending I’m A Superman: The Tony Hawk Video Game Story, which is out on iTunes August 18. Directed by Ludvig Gur and released to coincide with the re-rerelease of THPS 1 and 2, the documentary charts the rise of the THPS franchise and how it changed skateboarding forever, from the way tricks have evolved to the careers of the game’s characters.

I spoke to Rodney a couple of days before his 54th birthday. He’s soft-spoken, eloquent and almost comically humble about his achievements. As a kid, Rodney was handpicked by Stacey Peralta for the Bones Brigade, then he went on to skate for World Industries, Plan B and Enjoi before founding Almost Skateboards and patenting the design for Tensor Trucks. He’s released a plethora of video parts, written an autobiography and even done a Ted Talk. But Rodney’s greatest contributions to skateboarding are the tricks that he invented: the flatground ollie, the kickflip, the heelflip, the 360 flip, and too many others to name. It’s difficult to imagine what street skateboarding would look like today without Rodney’s influence.

Despite all these achievements, Rodney Mullen is still best known as one of the characters in the Tony Hawk’s Pro Skater game. He says it ‘dwarfed’ every video part he ever put out. It’s rumoured that Rodney was actually the most popular character in the game—more people played with his character than any other. When I bring this up, he gets embarrassed. ‘I think I’ve heard murmurs of that, but no one’s ever said it as straight up as you have,’ he says. ‘I feel too rude to ever ask if that’s a thing.’

There’s an irony in Rodney’s popularity. He’s commonly referred to as ‘the godfather of street skating’ and people who played the game loved him for his rail and manual balance, but he was a freestyle skater, which was considered by core street skaters to be pretty uncool. Freestyle was big in the ‘70s and, to a somewhat lesser extent in the ‘80s, but by the ‘90s it was shunned and all but dead. This made him an outsider in his own community.

Rodney explains: ‘When you freestyle, there’s something about the movement where everything is super rigid—pretty much every freestyler has that—and I had that in a bad way. I looked terrible on the streets, so stiff, it was rotten.’ He recalls going to the premiere of a Plan B video called Second Hand Smoke back in 1994 when freestyle skateboarding was virtually nonexistent. His part began with a few freestyle tricks to an Aerosmith’s ‘Dream On’, a song about getting older. It was supposed to be a nod to his roots as a freestyler and his transition to street skating.

‘I was thinking: this is me, it’s my background and this might be my last video. I’m just going to put it there because this is where I started and this is what I’m doing now,’ Rodney explains. ‘This guy Keenan came up to me privately, as though he didn’t want anybody to hear him say this, and he goes, “The other guys were laughing at your part. But I just want you to know that I saw how much you put into it and I thought it was dope.”’ Obviously, for Rodney, this kind of feedback from his peers was crushing. ‘You can go places and have a few people line up for autographs, sure, that’s cool,’ he says, ‘But when you have that experience… what matters most is the dude looking over at you who has walked it. Just a nod from that guy—from Guy Mariano or Daewon Song—just a nod from them is louder than a stadium crying your name.’

Rodney spent many years developing his street skating, eventually getting to a point where he was proud of his style and the way he had amalgamated freestyle with street skating. ‘The skateboarding community is everything to me, and as time goes on, what matters to me more than anything is to be accepted by the community, to be part of that community. But to be an outsider within that community, yeah, you feel that sometimes.’

But of course, Rodney has other stories about getting worshipped by fans. In the documentary, he talks about going to a demo, just after the game came out, and getting so swarmed by kids wanting autographs that he had to be hoisted onto the top of a van. The kids started rocking the van and he just sat up there cackling. More recently, he ran into Jonah Hill, the acclaimed actor and director of Mid-‘90s. ‘He came up to me and he was just staring at me,’ Rodney laughs. ‘I was kind of like, “What are you looking at?” It was the weirdest thing. But it’s because he was one of those Courthouse kids back in the day – that’s what the movie Mid-‘90s was about.’

Rodney has another good story about the effect of the Tony Hawk games. He was skating some picnic tables at a school out near Compton when two gang members came out and it seemed like they were about to rob him. They were huge, heavily tattooed and, by Rodney’s assessment, looked like they had just gotten out of jail. He was terrified, but then one of them recognised him from the video games and started listing off the names of Rodney’s signature tricks. Rodney laughs, ‘Within 30 seconds, he’s talking about dark slides and casper slides. I just remember thinking, “Thank god for this video game”’.

Wrapping up the interview, I ask Rodney which character, aside from himself, he would play with. The re-release of the game comes with eight new characters: Nyjah Huston, Leo Baker, Leticia Bufoni, Aori Nishimura, Lizzie Armanto, Shane O’Neill, Riley Hawk, and Tyshawn Jones. He says he admires Nyjah Huston and Jamie Thomas for their ability to skate such huge obstacles, but then settles on Shane O’Neill. ‘That guy is so liquid-smooth. He is the new generation of everything I aspire to be.’ He laughs, ‘It’s like Shane grew up playing the video game and believed we could actually do that every time. And now he can do it.’

Pretending I’m A Superman: The Tony Hawk Video Game Story was released on August 18 and is available to rent or buy on iTunes.