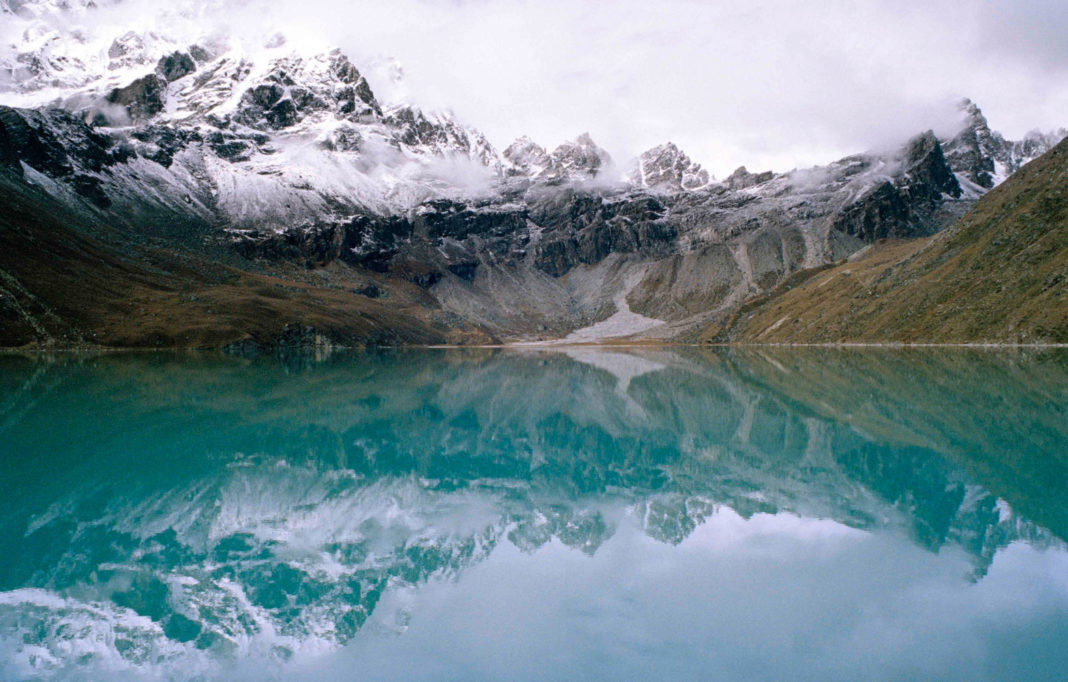 Rae Begley has done what so many have tried and failed to do.

When making work concerning the environment it’s important to remember that an artist needs to create a series that is visually engaging, rather than something that just preaches to the audience and demands that they pay attention to climate change. Rae has successfully created images that cut through the noise to bring home a message in the most awe-inspiring way. We asked Rae a few questions about her up-coming November 2nd solo show, And Then Nothing Turned Itself Inside Out, presented by COMMUNE.

When did you first start taking photographs?

In my early teens, there were three years in a row where my family gave me a camera for my birthday. I don’t think it was intentional, I’m pretty sure they just forgot that they gave me one the years prior. The gifts were Snappy Snap film cameras, so there were no manual controls but I was intrigued about taking photographs from this time. My Pa was also an avid photographer and very into the technical side of things—the opposite to me as I was always more concerned with the subject. He always had a camera in his hand at all the family gatherings and always took a slow, considered approach to his photography.

What made you want to travel to the Himalayas?

I have always been intrigued by the Himalayas and I love walking in nature, so in 2014 I trekked to the Annapurna Base Camp in Nepal, which led to my first small show of landscape photographs from this expedition with Mild Manners Gallery. The Himalayas won my heart and completely exceeded all expectations. They’re a challenging place to capture in photographs as they’re so overwhelmingly majestic and beautiful. The sheer scale of the mountains changes you. Being there puts your life into perspective; it’s a very humbling place to experience life outside of city life.

In 2016 I returned to the Himalayas for further exploration. I wanted to travel to a sacred lake which led me to seek out the glacial fed, bright turquoise Gokyo Lake and the adjacent Ngozumpa Glacier in the Khumbu region of Nepal.

When I arrived there, I was shocked by the lack of ice in the glacier. It resembled a moonscape or a quarry, not a glacier. It was apparent that climate change was having a devestating effect on the longest glacier in the Himalayas. Upon returning to Australia and developing all my film, I was able to see even more detail in the photographs and decided to make the glaciers the focus of the exhibition.

The works hold space as majestic reminders that the earth is a living planet of complex beauty under threat. The fragility of the soaring landscape in the Himalayas has been preserved as it was photographed and is now historical documentation in the timeline of climate change. 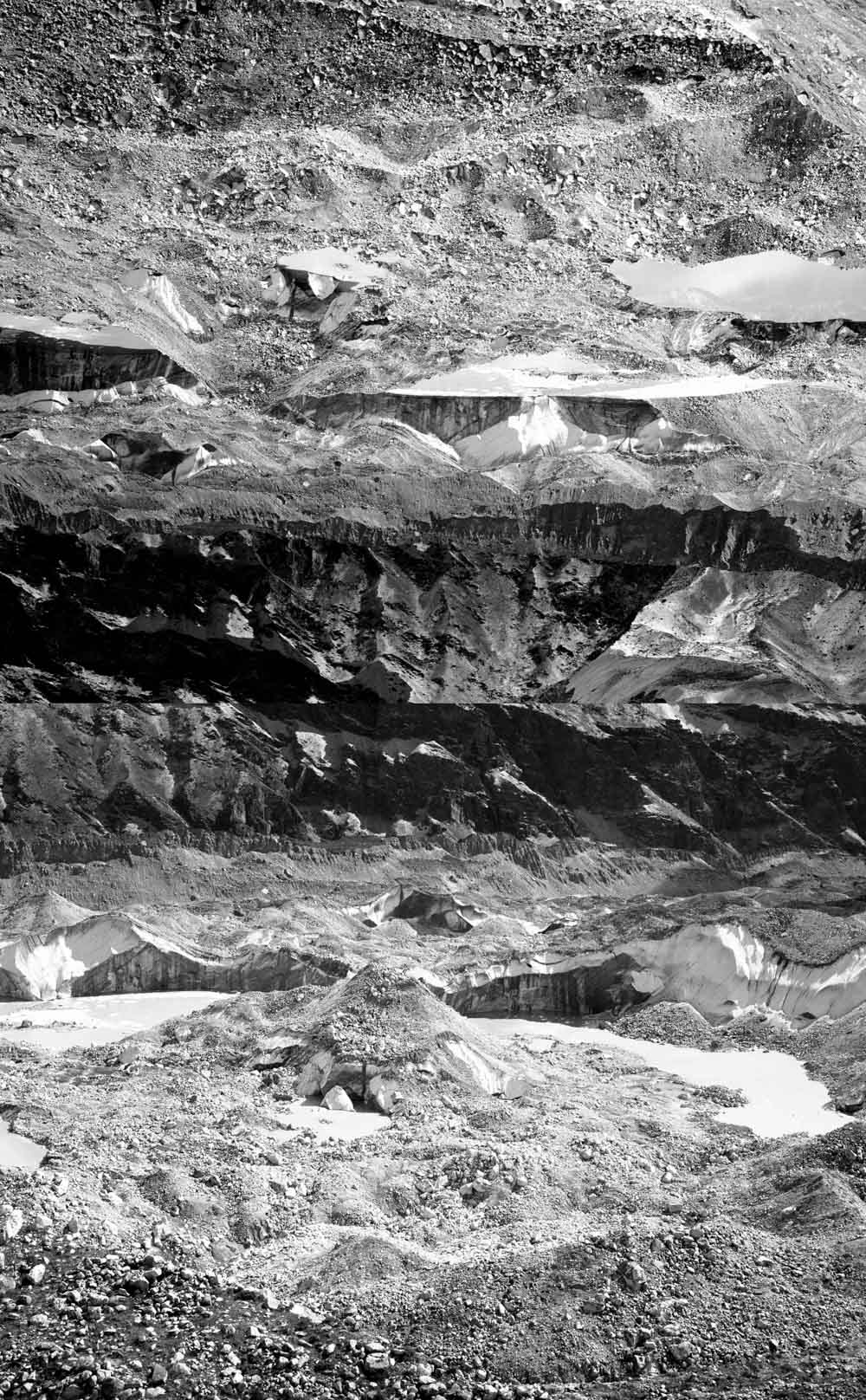 What are some of the questions you would like your audience to ask themselves when looking at these works?

I hope to evoke an emotional response from the audience, for them to acknowledge the overwhelming beauty of the landscape and the underlying darkness of the Himalayas in this current time. I’d like for them to feel a sense of urgency about the impact of climate change. It was important for me to turn the lens to the natural world and also to show the works at scale so they became powerful and symbolic, something that couldn’t be ignored or scrolled past on a smartphone.

What is the best and worst thing about being a photographic artist?

I love the way photographs capture and preserve moments in time. I also love how you can paint with light through the photographic process. The best thing for me is to be in a position to use the photograph as a medium for social change and education, but to do it in a way that’s remarkable and beautiful whereby the audience is seduced and mesmerised in the process. I also really love the slow pace of working with film and printing, the way it makes the outcome feel more considered and meaningful, more soulful. The worst thing is the impact of digital and mobile phone cameras on peoples’ perception of photography; that it’s a deletable commodity.

Have you always been drawn to landscapes?

There’s something wonderfully reliable about landscapes that first captured my attention. A sense of peace and freedom. I have always been drawn to the natural world and loved the work of photographer’s like as Ansel Adams. 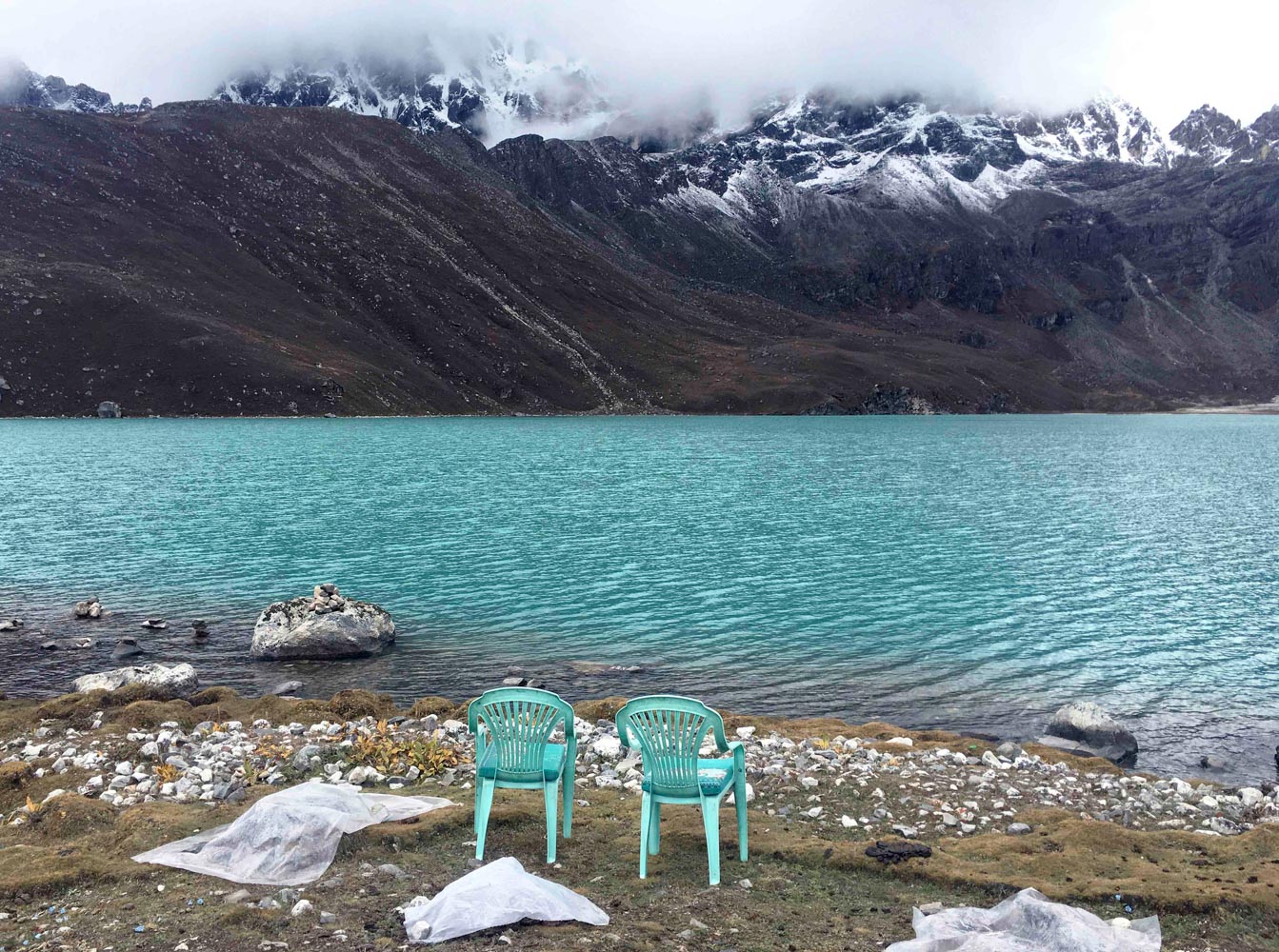 What’s the most important part of curating your own solo show?

My intention with the curation of this solo show is for it to be an immersive experience, to create a space outside the traditional white wall gallery context that activates all the senses. Collaborating with COMMUNE to access multiple expansive warehouse spaces has opened up the luxury to create a journey for the audience so they can enter and travel through the exhibition and then exit to make their way to the bar after they have engaged with the works. The soundscape created in collaboration with Erik Omen is important to pull the audience back to being present in the environment we have created.

How did your collaboration with Erik Omen come about and how does his work speak to yours?

Sound can so often be overlooked. The Himalayas have a rhythmic sound; when you are walking up to nine hours a day over 18 days you start to notice the nuances and the repetition of sounds, most prominently the yak bells coming down the mountain, the sherpas’ commands and whistles, footsteps on the path, Nepali music playing on the porter’s personal radios and in the villages, the laughter and chatter.

I’m interested in how we attach sound to memories and also the exploration of sound and frequencies for healing. I loved the idea of creating an original score for the show that was spiritual, ambient and hypnotic, that referenced the sacred mountain culture of the people that resided in the landscape.

I’ve been inspired by sound healing and the vibrations of sound for enlightenment recently so I approached Greg Mullins and Jeremy Hansen, collectively Erik Omen, to produce an original piece of music that evoked tragedy and beauty. They produced an emotive hour-long ambient soundscape which will be looped and played throughout the space. The music was recorded in their studio in Bungendore, NSW, and incorporates Nepali sounds (including yak bells and monks chanting in Tengboche) that I recorded on my journey in the Himalayas.

After this show what’s inspiring you now/in the pipeline?

I’m inspired by the idea of exploring more of the impact of climate change on local cultures as well as the landscapes they reside in. I’m currently looking at an expedition to spend time with the Inuit people inhabiting the Arctic regions of Greenland, Canada and Alaska. I am also working towards a smaller trip to the Mungo National Park in New South Wales in the near future and potentially a New Zealand visit to explore the glaciers and their rapid decline.

Get down to Commune at 901 Bourke St. Waterloo on November 2nd from 6 pm to enjoy some delicious tins from our mates at Young Henrys and Ice cold 42 Below vodka while you get cultured and see some mind-blowing art.