The first time I see C.O.F.F.I.N play is at a shitty pub on Parramatta Road in Sydney.

It’s a weeknight and there’s no stage, so the band is set up in a carpeted corner in the front room. With no less than three guitarists and a bass player, C.O.F.F.I.N plays fast, riff-heavy punk songs. Behind them all, a deep-voiced drummer-singer in thick, Coke-bottle glasses simultaneously screams and smashes away at a drum kit. The band are knocking back schooners aplenty, cracking in-jokes and they close out the set with a cover of GG Allin’s, ‘Bite It You Scum’. Then Abijah, one of the guitarists, begins a solo that culminates with him ripping apart his guitar strings, prompting the rest of the guys to start smashing their guitars around and kicking over the drum kit, trashing the set. 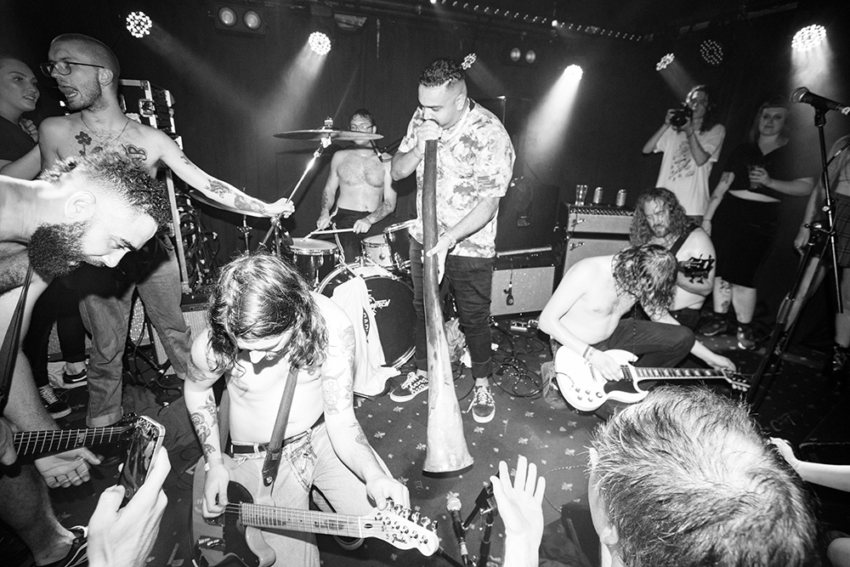 Search for C.O.F.F.I.N’s music online and the first album you’re likely to find is Piss~Up, with a cover displaying four of the band members urinating into their own mouths. The photo is cropped so that no dicks are visible but it’s an eye-catching cover none the less. It’s the sort of album art you might expect from a bunch of dudes who grew up skateboarding on the Northern Beaches, who have been playing music together since they were 12, and who don’t take themselves too seriously. And while C.O.F.F.I.N are certainly a fun band, they actually have a lot to say about more important topics. When I chat on the phone with Ben Portnoy, C.O.F.F.I.N’s formidable drummer-singer, he’s remarkably eloquent, cautious with his words and politically engaged. He brings up the Black Lives Matter movement, the enforced lockdown of the Melbourne housing commission and footage of an Aboriginal teenager getting tripped and pushed by a NSW Police officer.

‘I think with stuff like the George Floyd murder and the footage of Aboriginal teenagers being taken down by police with extreme violence needs to be seen because it obviously has quite an emotional and offensive reaction from people,’ he says. ‘The disease of racism that courses through Australia, alongside the misogyny, homophobia and fear of the other is a systemic problem.’ 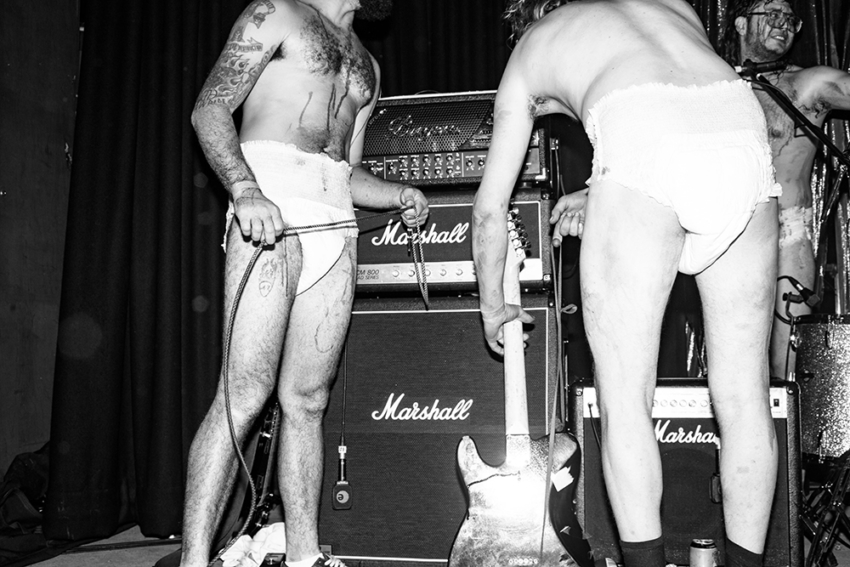 Abijah, the aforementioned string-ripping guitarist, ties his heritage back to Grenada, in the Caribbean. He adds later, ‘Now is a time that, through collective unity, people’s voices are finally being heard and acknowledged. The whole system needs to change and that will never happen overnight, but it’s good to see that the ball has started rolling towards implementing these necessary adjustments.’

C.O.F.F.I.N’s most well-known song is ‘White Dog’, a heavy, poetic and scathing polemic against white Australia’s refusal to acknowledge the violence and oppression faced by Indigenous Australians. On that song, Ben screams, ‘For a white dog, it’s a mongrel nation / And your litter’s filled with the filth of hatred.’ The film clip is a confronting history lesson, containing distressing footage of Indigenous people in chains. The band released that video on Australia Day a few years back and since then it has been taken down by YouTube multiple times, ostensibly because the footage is too distressing, but YouTube has been characteristically vague about the reason for censoring it. 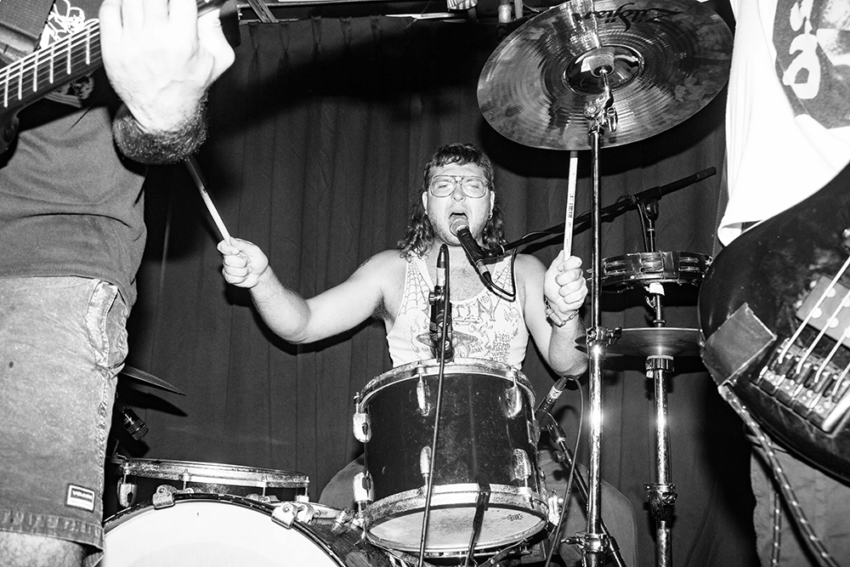 More recently, C.O.F.F.I.N have run a small campaign to raise money for two Indigenous organisations: Black Rainbow and Sisters Inside. They’ve got a $50 merch pack and all proceeds are going to the organisations. Ben says, ‘That was just one small thing that we felt that we could do that could generate some cash to help slightly.’

While ‘White Dog’ makes C.O.F.F.I.N’s stance on racial injustice pretty clear, some of their other songs are slightly more cryptic. ‘For The Boys’ at first sounds like a bit of a bro-ish anthem and ‘Locals Only’ could be interpreted as a song that celebrates territorialism. But Ben clarifies that they’re tongue-in-cheek criticisms of the Northern Beaches scene that the boys grew up in. ‘A lot of those lyrics are inspired by what was happening around us growing up on the Northern Beaches and how it’s a very masculine, intimidating culture,’ Ben explains. ‘Growing up in that, you have to constantly be checking in with yourself to ask, How am I part of this? Because inevitably, you are going to pick up some of those things along the way, so songs like that exemplify the internal battle that’s going on. When the song first came out you’d play different crowds and you think, Oh shit, are people yelling “Locals Only” because they think, “Fuck yeah, only locals should be here”? Or are they yelling, “For The Boys”, because they think, “Fuck yeah, yeah, the boys” or are they yelling it because they know the song? Maybe it’s not a good way of tackling things because it can be misinterpreted but then again… I think if anyone’s into the band and listens to our catalogue, it’s easy to tell what side we’re on: that we’re against toxic masculinity, that we hate racism, that we want to challenge homophobia.’ 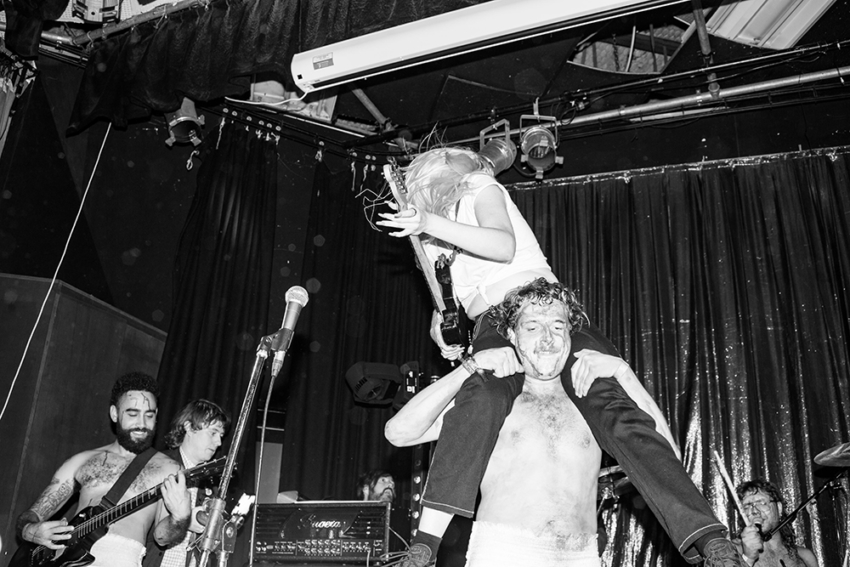 I ask if it’s ever confusing for people to see a band who piss in their own mouths but who also want to seriously weigh in on social, political and identity issues. ‘Not really, because we’re a punk band. It’s voluntary for people to listen to us or care about us,’ says Ben. ‘If you don’t like me peeing in my mouth and that being a completely stupid, illogical thing to do, and then also talking about something that’s going on politically in our country, then sweet, you don’t have to buy the album, you don’t have to come to our gigs. We are conscious of the fact that people might think those two worlds don’t work well together but we don’t take ourselves too seriously or think that we necessarily have an authority on the things that are going on. But we maintain that we’ll always be honest with ourselves and always be honest with checking in on ourselves. We’re not trying to be anything we’re not.’

C.O.F.F.I.N have gotten more socially and politically engaged as they’ve gotten older. For context, they’ve been a band since they were 12 and 13 years old, playing together since 2005. They started out performing at youth centre gigs, parties and hauling generators to local skateparks to play DIY shows for their friends. 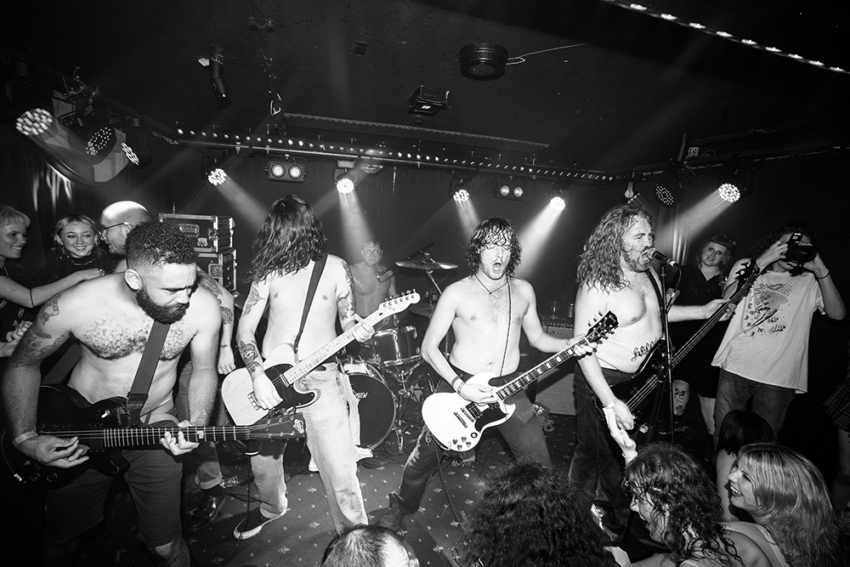 ‘It’s definitely been an upwards tumble rather than a stride,’ says Ben. ‘Some people would look at us and go, “Fourteen years together, how are they not further along? How are they not better?” But realistically we only started getting serious after we were able to play 18-plus venues.’ But that was by no means the point where they achieved overnight success. In fact, they famously got banned from a bunch of venues on the Northern Beaches, including the Narrabeen RSL, The Steyne, The Old Manly Boatshed, Shark Bar, Nomad Brewery, The Time and Tide Hotel, and Park House. For a long time, they kept playing parties, Bowlos, RSLs, and wherever else they could get a show. Ben says it wasn’t easy but reasons, ‘You’ve got to be faced with challenges to get anywhere.’

C.O.F.F.I.N recently finished recording another full-length album at a studio called The Pet Food Factory, run by Jason Whalley of Frenzal Rhomb. The album doesn’t have a name yet but Ben says that lyrically, it’s less tongue-in-cheek and a little more ‘consciously fuelled.’ He says, ‘As we grow more as a band and have more of a following, we do feel the responsibility to direct what influence we have on things that are morally important to us and pressing in our community.’ 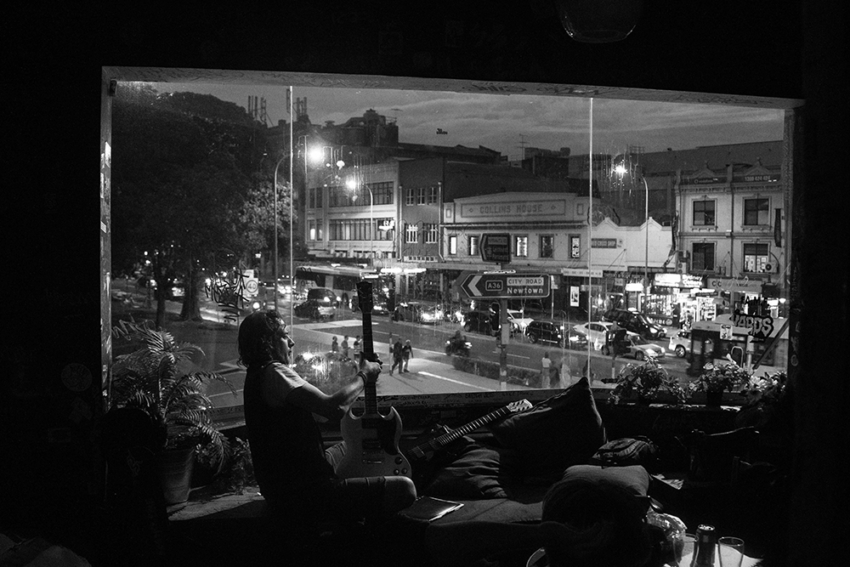