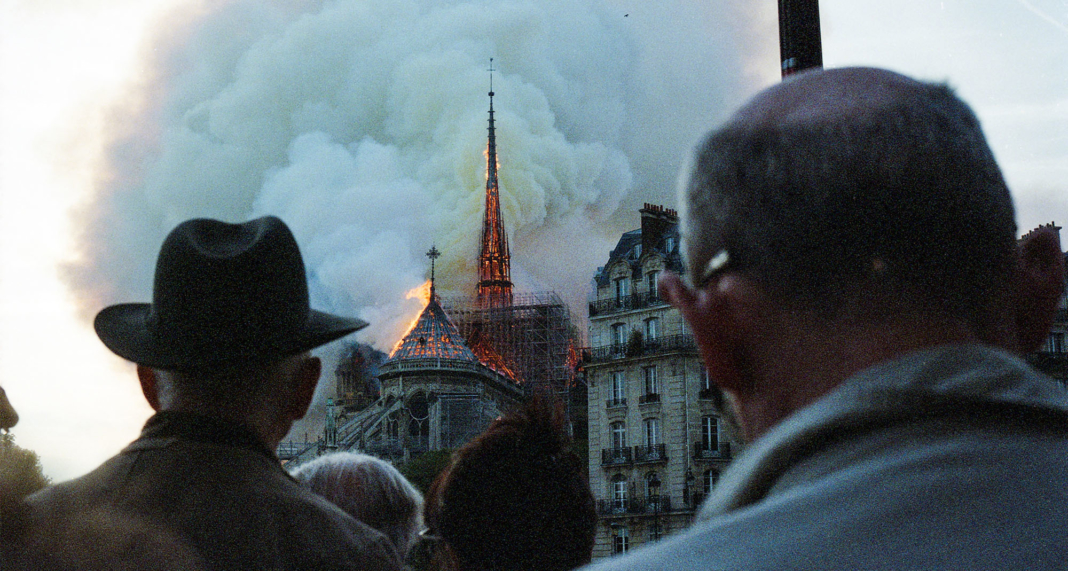 Being a professional skateboarder isn’t easy.

It is a demanding career, plagued by enormous pressure from sponsors, financial uncertainty, and the constant threat of injury. Truly a demanding and difficult thing to do. You know what else is a demanding and difficult thing to do? Printing enormous photographs in a makeshift darkroom with a sponge and a shower sprayer. Given that Paul Grund does both, one can only assume he is either incredibly hard-working or completely out of his mind.

Most know Paul as Polar Skateboard’s favourite Frenchman. However, if you’ve ever bought one of his boards, you’ll know that he is also a talented photographer. His fondness for dramatic black and white shots, accented by a thick gradient and bursting contrast is a refreshing and striking anomaly in a photographic contemporary where symmetry and a light tonal palate is trending. Perhaps most impressive about Paul’s wet printing technique, is the scale at which he is creating his imagery. He is going big—real big, to the point that me and my friends couldn’t figure out how he was doing it, and that pained our egos quite a bit. I called and asked him to share his secrets.

How the fuck do you do it?
You told me you’re a darkroom printer, you know how it works right?

Yeah, but how do you get it so big? And why? That’s well beyond standard tray and enlarger size.
I got frustrated seeing my photos printed so small. With those plastic trays, you can only print as large as the tray. I realised my enlarger head could tilt and turn. I was tilting it toward a wall for a while but I found that it was very annoying hanging the paper each time. So I flipped the enlarger head to project off of the table and onto the ground. The enlarger is casting about a metre off of the ground onto the paper. 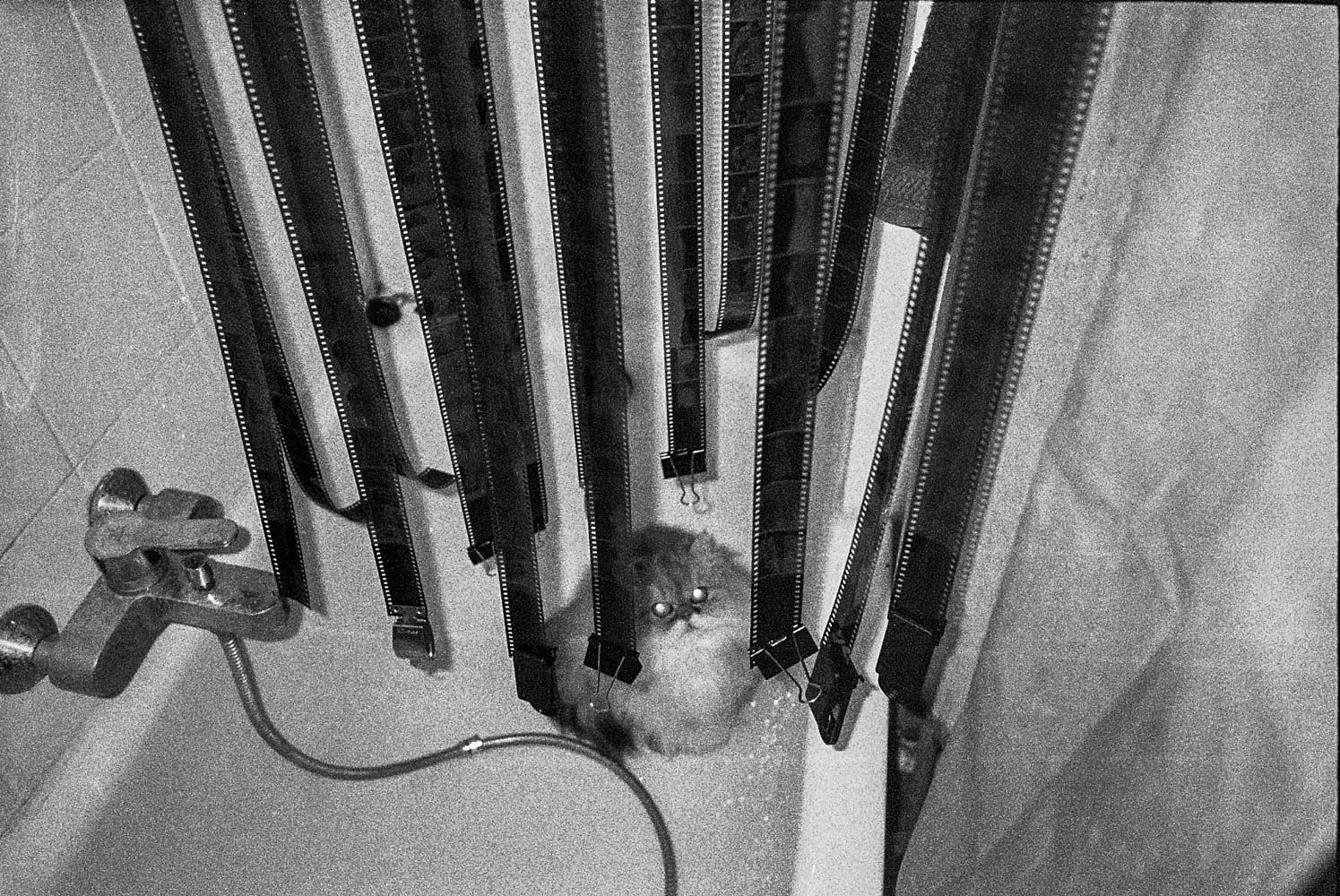 Where did you get your gigantic trays? Or do you just fill your bathtub with paper developer?
What? That’d be crazy. I just use a sponge to spread the developer over the image. You could use whatever you want, really, as long as it’s spread evenly. I’ll usually test how the image is exposing and developing by doing one sponge wave and letting that part develop. I’ve found the sponge to be the best way to spread the developer.

This is absurd. That sounds like a lot. Do you have a studio space or something?
Yeah, it’s a lot of work. I just do printing missions here and there. I print at home. I have a bedroom but I just use it as a darkroom and sleep in the living room. I was trying to mix darkroom and bedroom but I had so much stuff all over the place and I was too lazy to clean everything all the time and try to keep it separated. I said fuck it and now I sleep in the living room. It takes around 20 minutes to get it pitch black in there and then it’s a darkroom. 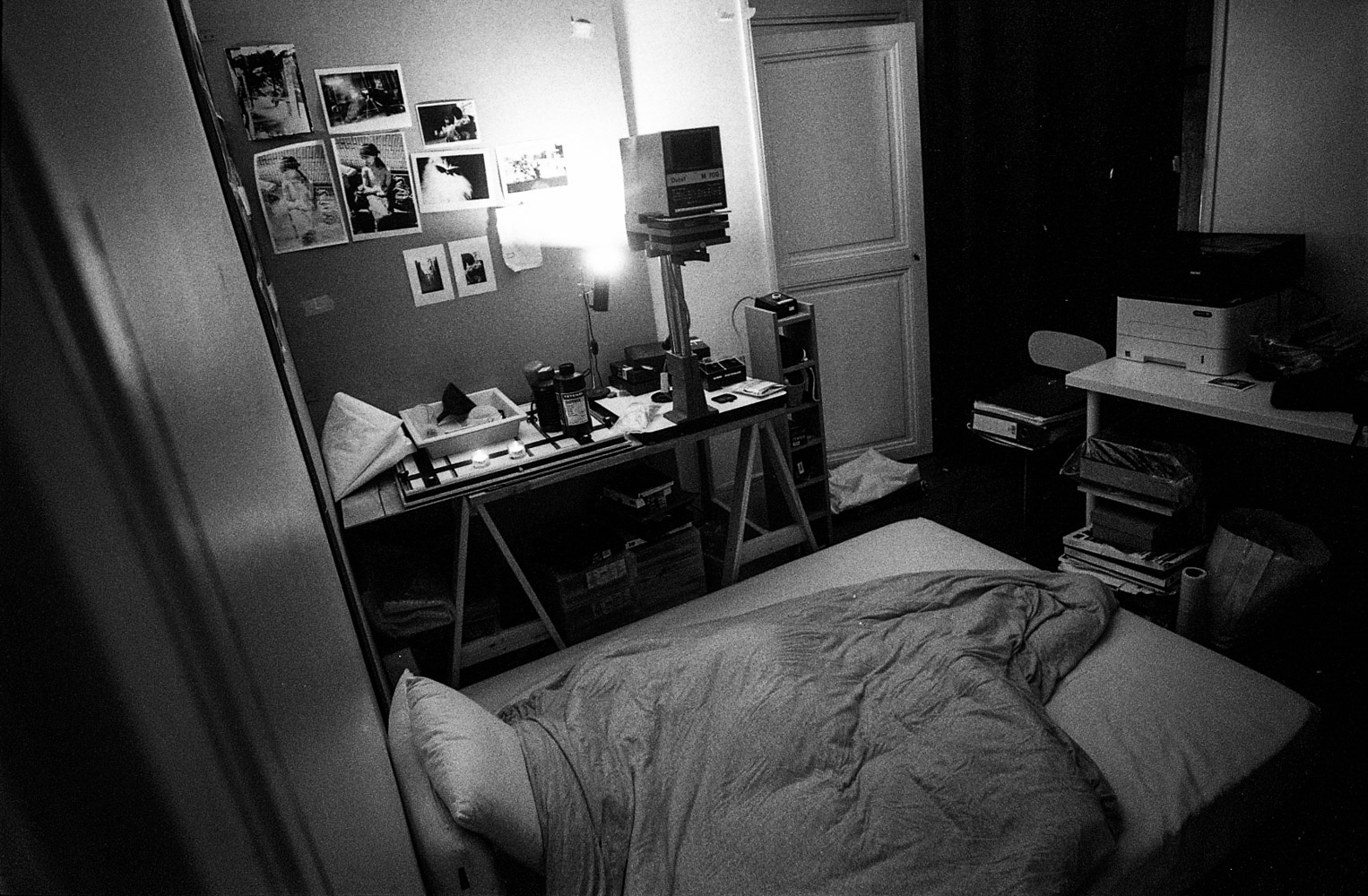 How’d you get started in the film/darkroom print game? Were you always shooting?
No, not at all. I went on a trip with some friends that wasn’t even a skate trip, and one of my friends gave me a camera. I’ve always had a bad memory, too, so I was like, ‘I need to fix these moments in time and keep it my whole life,’ so that in 50 years I can look back and remember that moment and that time that I probably forgot about. It was cool because there was a negative and prints. When you take a photo with a digital camera or with your phone, you don’t have anything, it feels like it doesn’t really exist anywhere physically. 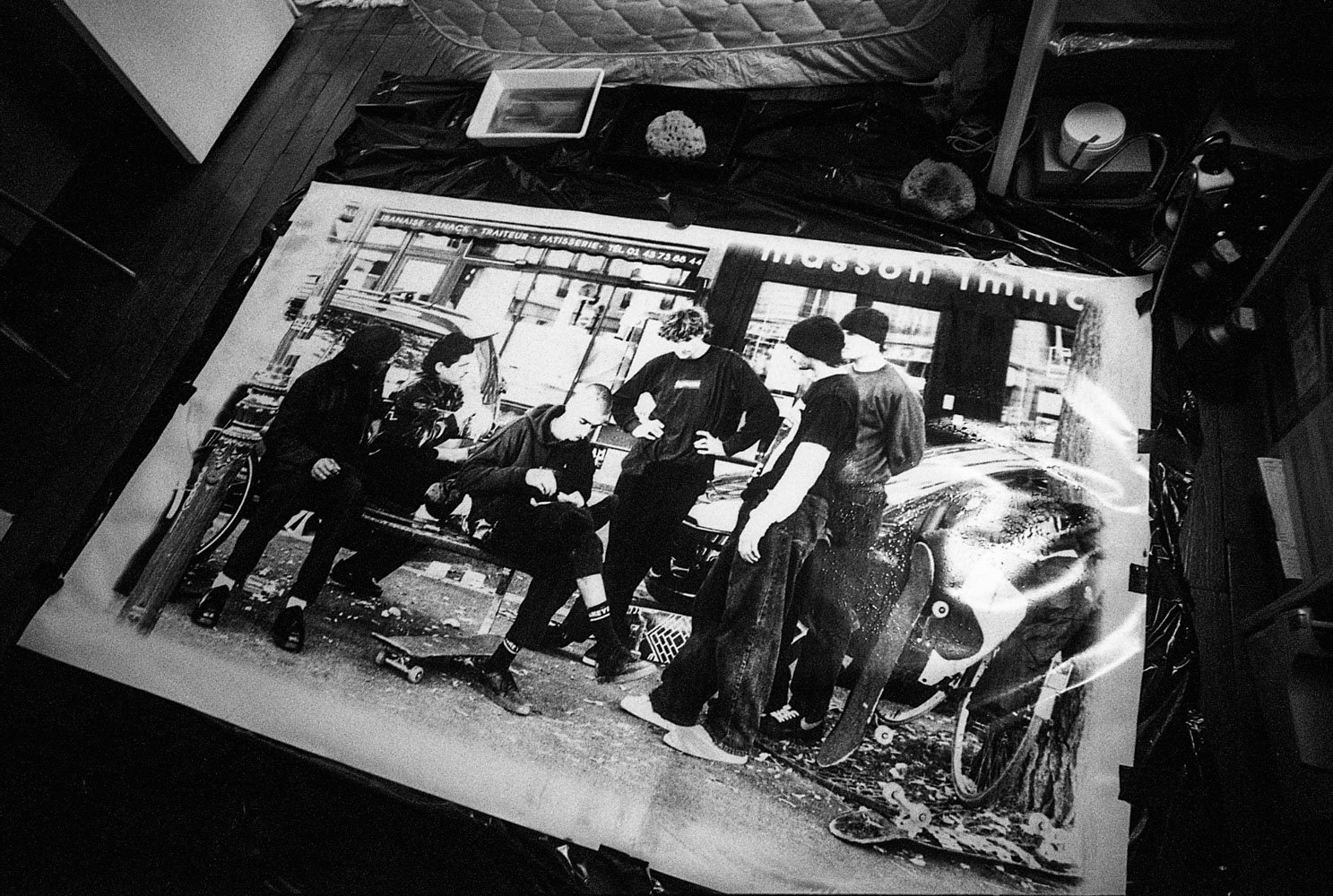 I really liked taking photos on film and I was going to a lab to process, but I was hardly working and had almost no money so it was very expensive. I decided I wanted to keep shooting, so I bought the chemicals to do it myself to save money. I started to piece together the materials from all over France; the enlarger, trays, whatever, until I had a darkroom. At this time I was also skating a lot and going on a few trips a year, which was great for photography because I got to be in a new place and archive what I was doing and seeing. It helped to keep me motivated and interested in shooting.

Darkroom printing is a dying, expensive art. What do you think you want out of it?
It’s just a hobby, I think. I’d been doing photography for a long time, just being inspired by what I see and experience. Obviously, I take it a little more seriously now, but not to the point that I want it to be my job because I think maybe if it were my job, I’d be over it. I think about how being a professional skateboarder sometimes made skateboarding a little annoying. I wanted to keep it as a hobby because it fits better and I’m more productive that way than when you are sort of obliged to go skate because it is the only thing you do. I sort of like having photography as my own thing on the side that is only for me, where no one can tell me what to do or how to do it. I just get to do it because I like to do it. 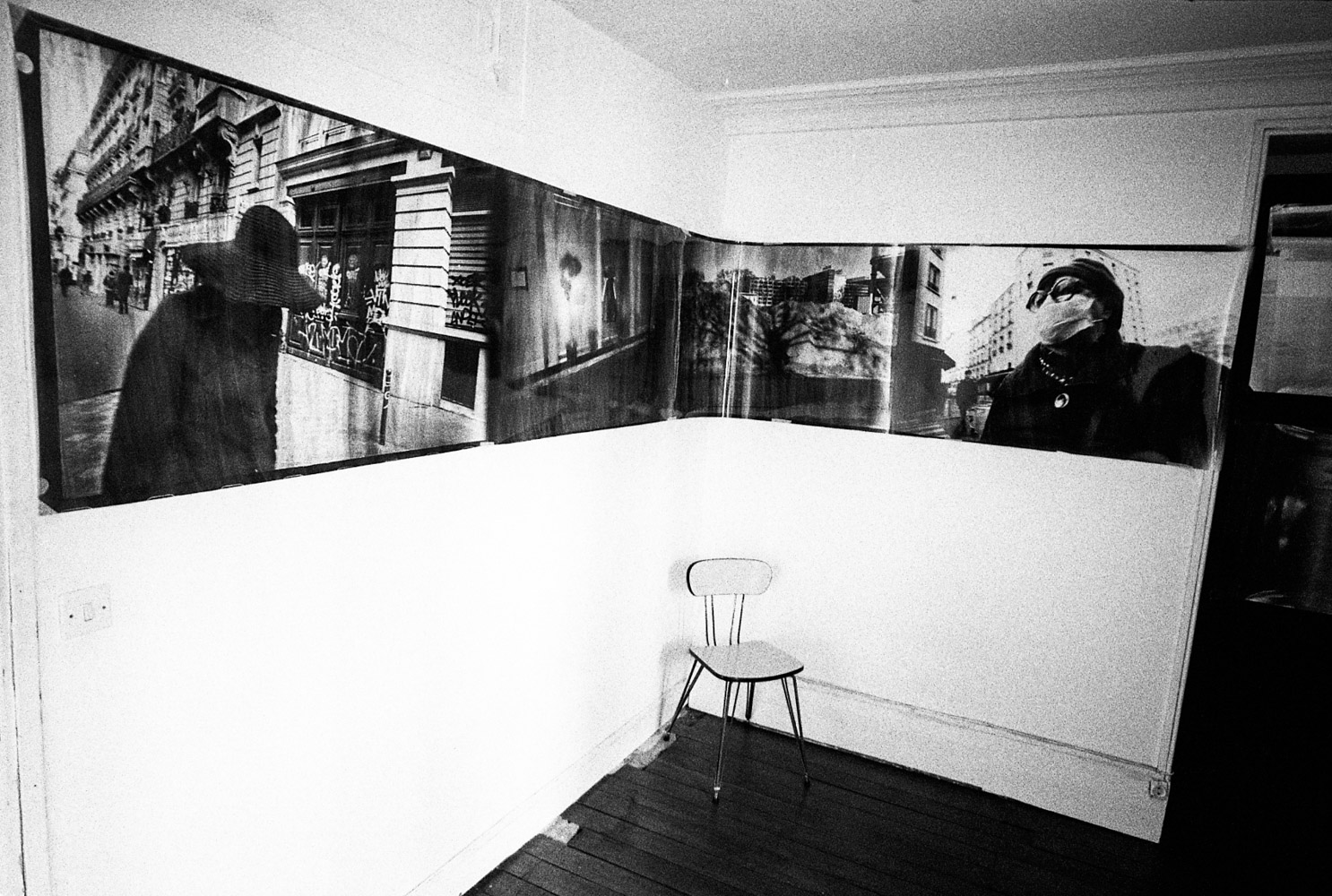 Has skateboarding affected your photography? Or vice versa?
Maybe it has? I don’t know. I guess it has affected what I take photos of because of all the travelling I’ve done through skating. I have gotten to see all the places I’ve been and the people I’ve met that inspire me in a way. It isn’t a direct influence. It’s great to get home and be like, ‘I shot all of these photos that might be horrible, but they might be great!’ I also love the physicality of film and printing. I don’t like being behind my laptop working on photos. I like to do things and make real tangible things. That’s why I do printing and make fanzines. When you have an idea, even if it isn’t the greatest idea in the world, you can do something with it and work with it and find a good way to look at it. Something about the physical aspect of photography and zine-making—just making something you can touch and see and hold. 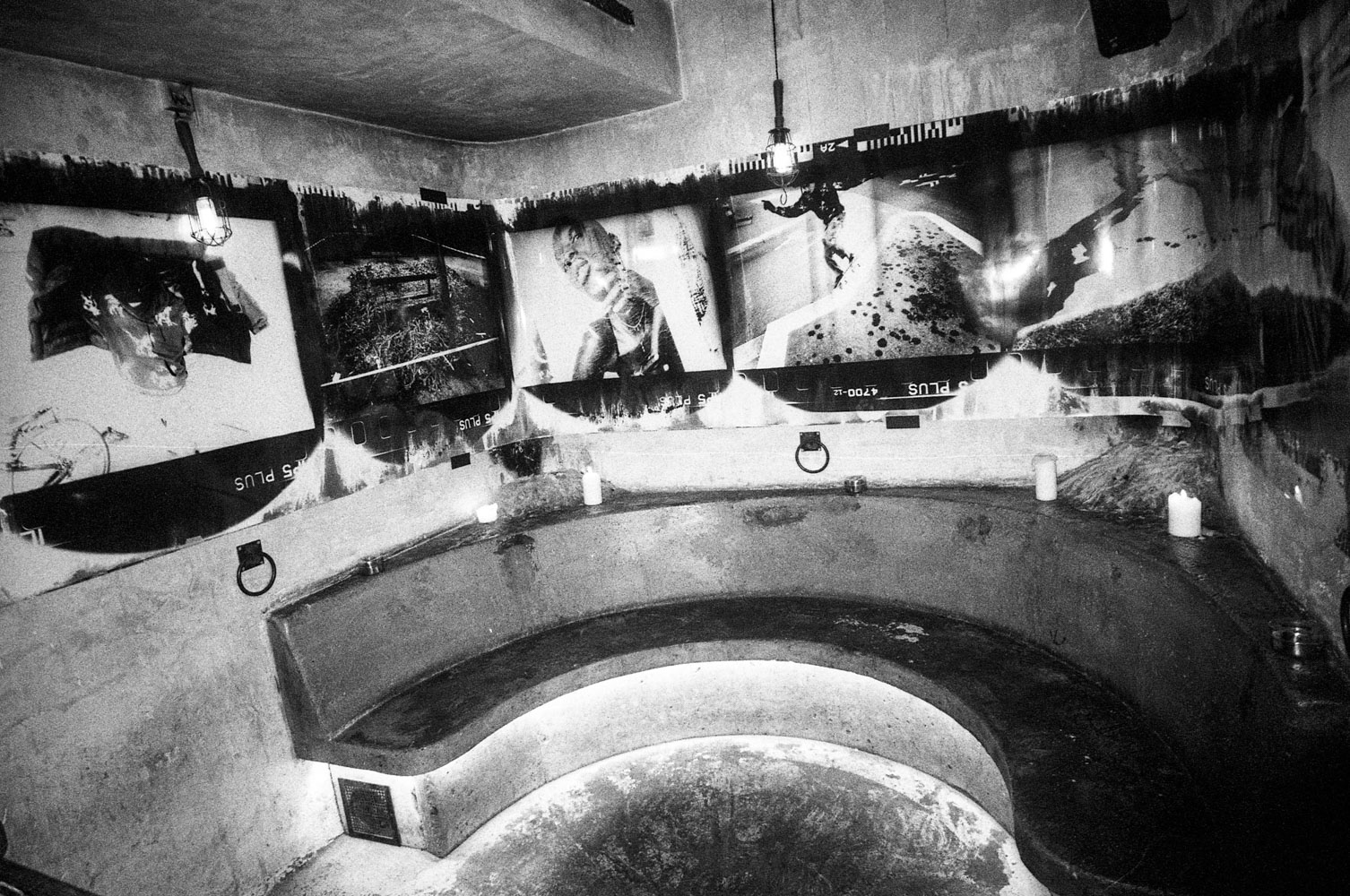 Oh, you’re making photo zines too?
Me and my friend have been doing this small publishing thing called SerpentPress. I’m publishing all my zines about Paris through it. Vol5 is the last one we did, that came about a couple weeks ago. It’s a kind of like a journal that I started publishing in January 2020. I like the idea of shooting and putting out the photos in the shortest amount of time possible; basically each zine is filled with my most recent pictures from the last couple of months. For each new release, I’m showing those big prints either in my place or at my friend’s bar, Medusa. We also published another photographer’s works named Maxime Verret, it’s called « TUBES » and it’s a series of photos of air extraction systems from kitchens in Taipei, Taiwan. I’m also working on a book from all the pictures I shot on skateboard trips in 2017, it should be released at the end of this year.

I notice that you have very few direct photographs. A lot of them are double-exposed, some sport a Dutch angle, or have a very high contrast and thick grain. Where does this style come from?
That might come from being very into older Japanese photography. The first kind of picture I saw was in a classic Japanese style—very contrasty, with a heavy grain. I tried to do the same thing. I like the roughness, a little dreamy. Maybe I see something different in a scene and I want to try and get something more abstract out of it, I don’t want to try and see a different form. 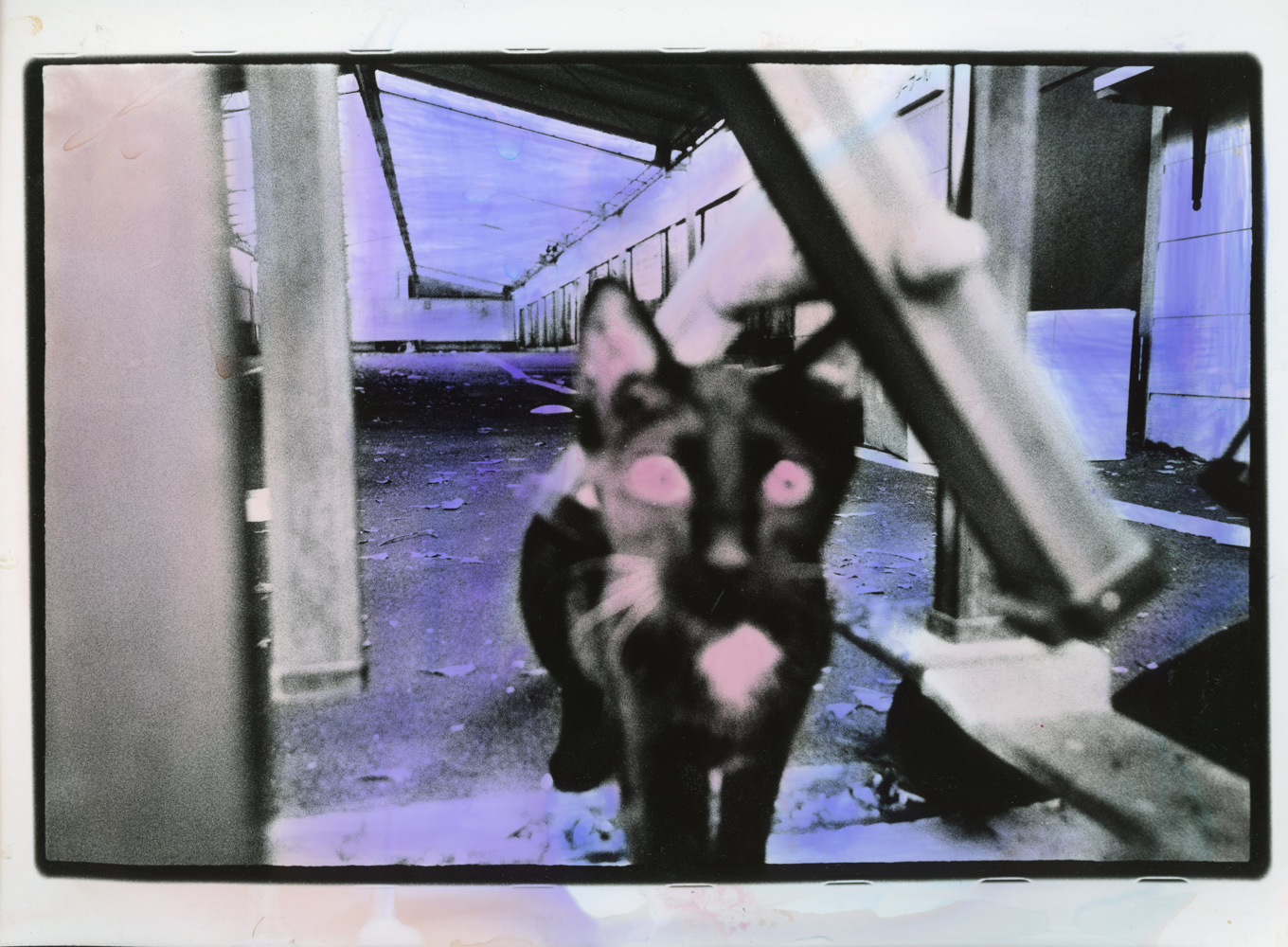 Who are some photographers that you’re into?
I really like older Japanese photographers like Daido Moriyama or Takuma Nakahira. Newer ones, maybe Daisuke Yokota. I don’t even understand what he’s doing, scratching negatives and boiling films and it looks like a very random scene but very abstract. I like the fogginess. You have to interpret things differently.

Do you do creative stuff outside of photography?
Just skating, really. It takes up so much time. Skating, shooting, processing, printing… I do some other stuff here and there, but my main focus is on skateboarding and photography. 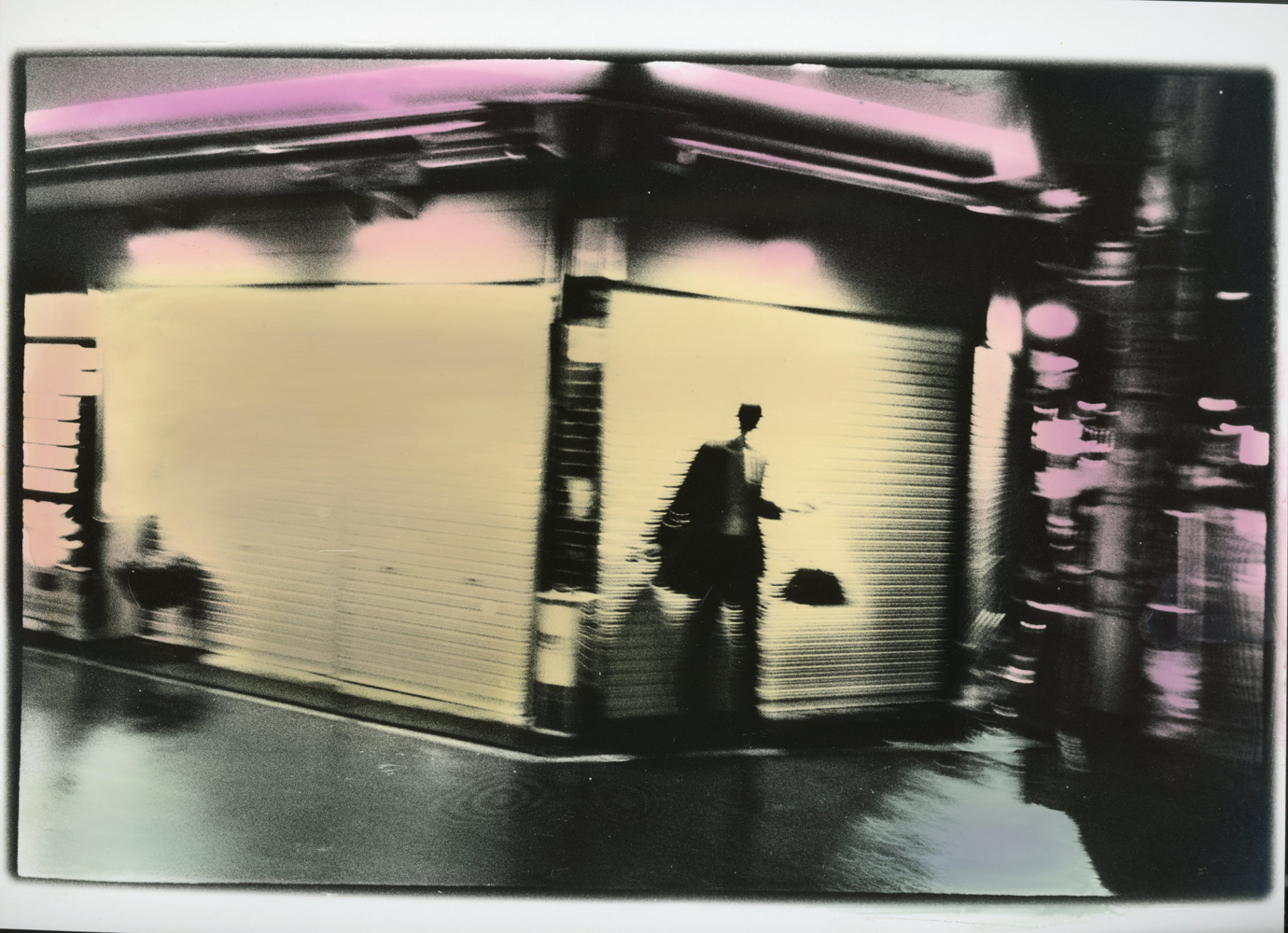 It’s cool to see those two worlds combine. I’m pretty stoked on your Polar boards. That dog photo series board is sick!
Oh, thanks, man. I’m glad you like it. It’s not really possible all the time because there are so many boards coming out; you need to have two boards in every drop and it’s hard to keep up with that production. But if my name is going to be on a board, I want it to be something very personal from me to whoever is getting that board. I don’t want it to be something that doesn’t suit me. I know some people who have boards don’t really care that much about what it looks like, but I want to like it and I want to be happy with it. It’s a board from a brand that I like, I want to do what I can to make it as good as possible. 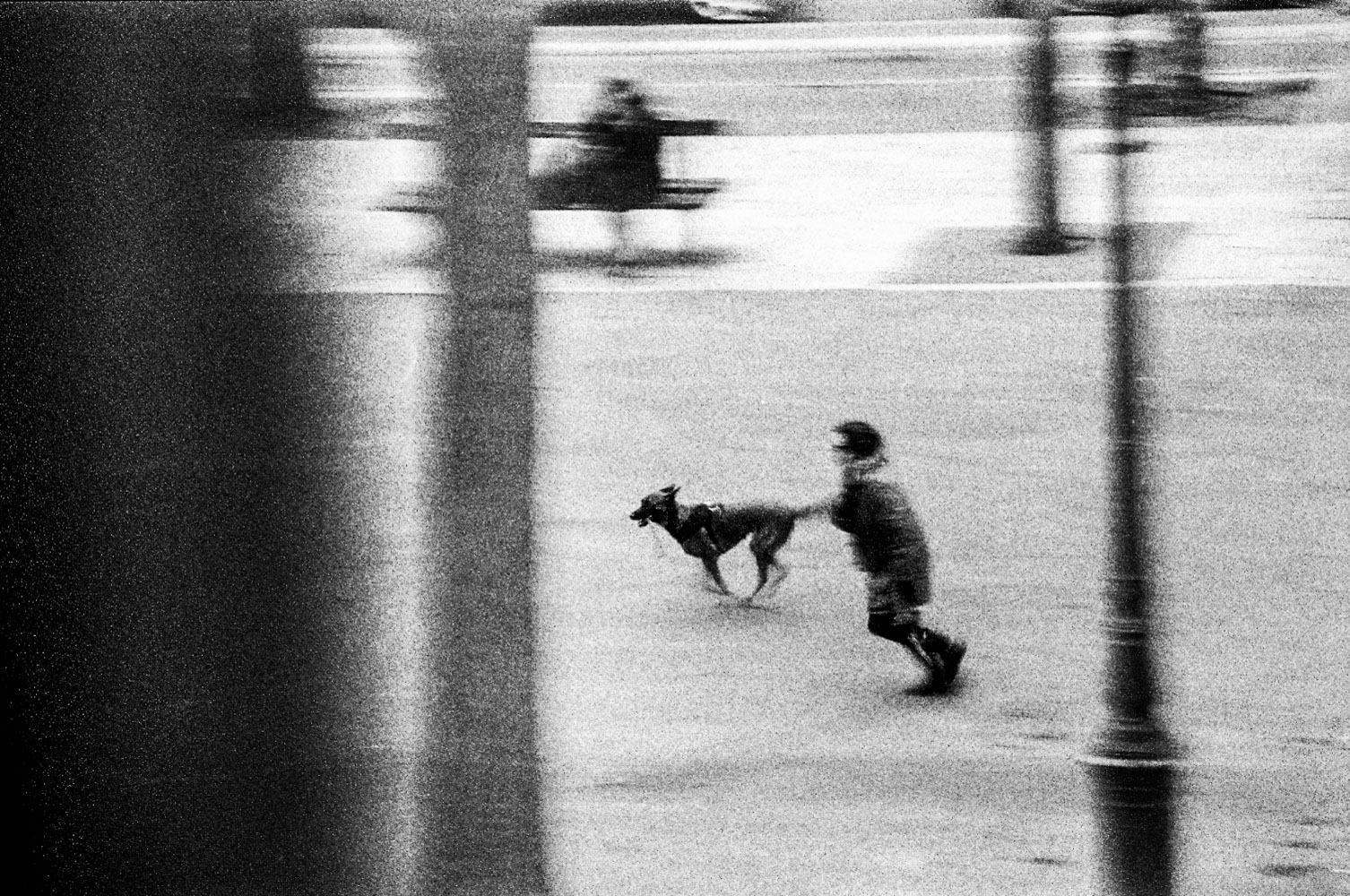 What words of wisdom would you give to someone who’s starting out in film/printing?
Don’t expect much of the results immediately. If you expect too much at first, you can be disappointed and lose motivation to continue. Just shoot a lot and keep at it, no matter what. Shoot whatever feels right, whatever you love. Keep practising, fail, learn. If you love it, keep at it. It gets better. It gets good. 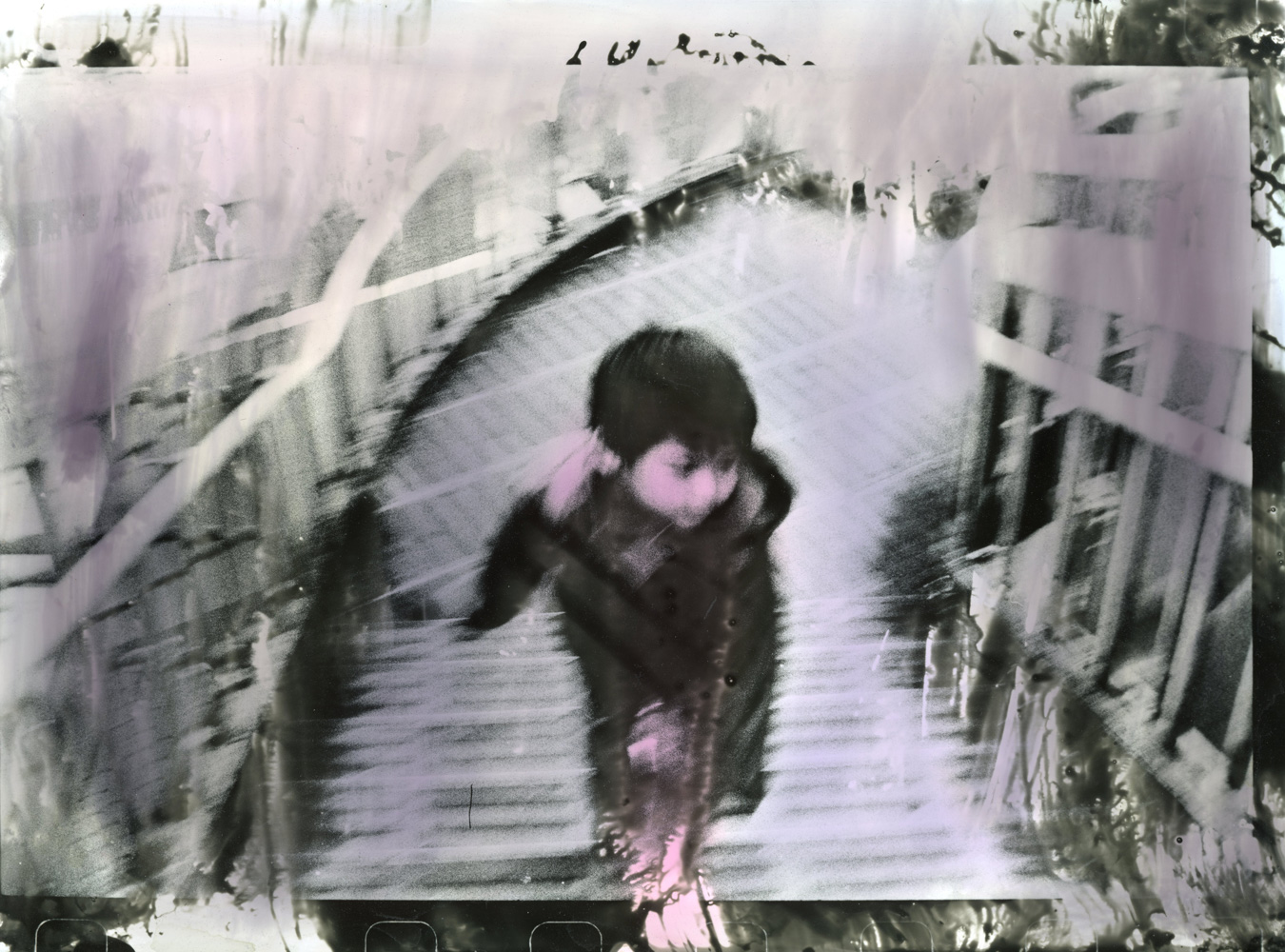