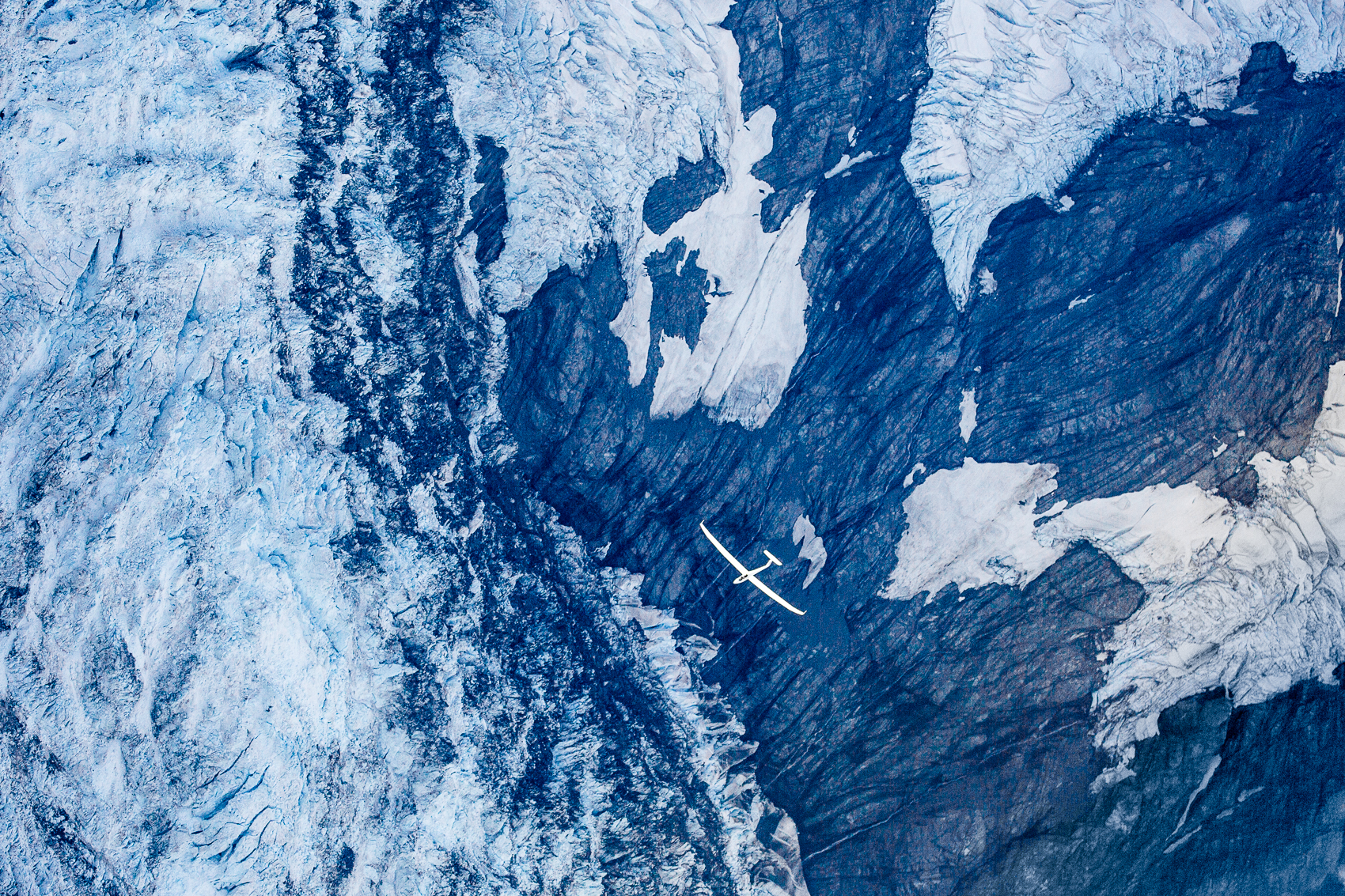 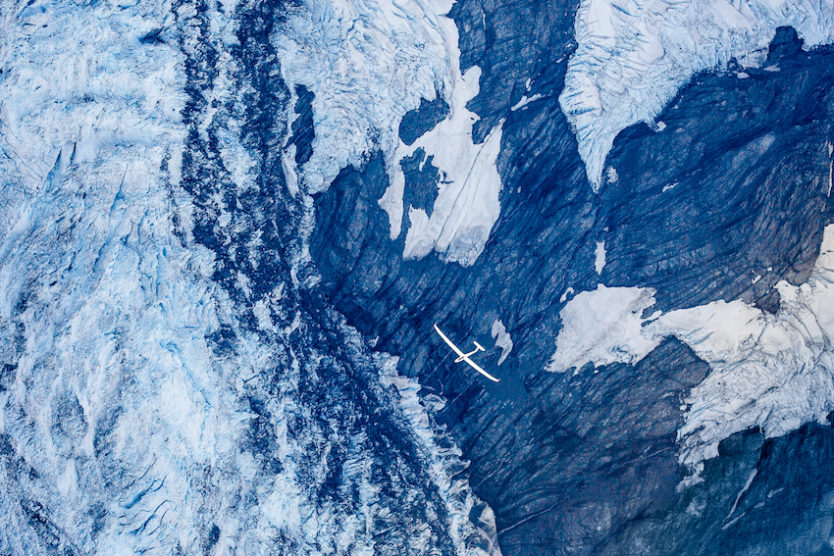 Drones are cool but have you ever shot from an engineless glider at 18, 000 ft?

Sydney photographer Mark Clinton has, so we asked him about it. And a couple more of his kind of OK shots.

“My good friend Fraser is a big aviation geek. Recently, we’ve been working together on an aerial series in the least practical way – out of an engineless glider. It’s been an exciting challenge having to communicate what I want only to realise what is and isn’t possible, due to the risk of falling out of the sky. The concept behind gliding is crazy – relying on hot air being drawn off mountains to keep the glider in the sky. Earlier this year, we had perfect day where we reached 18, 000ft around Mt Cook – NZ’s highest mountain. There happened to be a Norwegian pilot up at the same time whose glider provided good scale against the glacier below.” 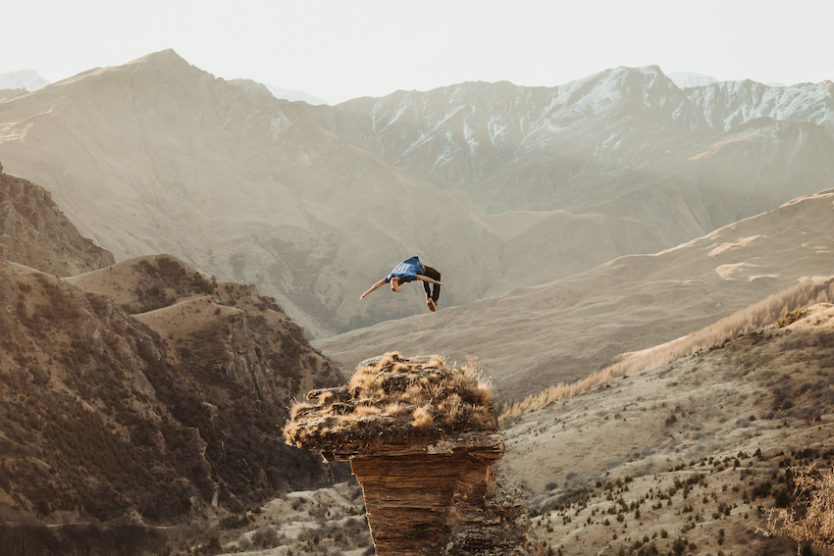 “Ex-acrobat turned professional snowboarder, Billy Morgan, happened to be shooting a web series while we were both staying with a friend in NZ. One day we tee’d up a days mission four wheel driving around Skippers Canyon. We hopped out to catch the last glimpse of sun, when he noticed this sketchy tower of loose rock. Billy hopped up for a hero shot then decided backflips were on the cards. He would’ve done at least 10. I remember feeling sick each time.” 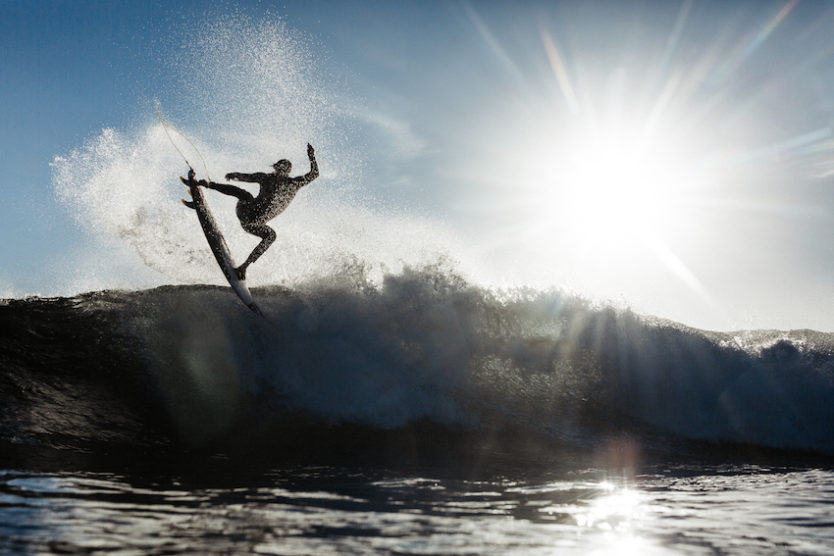 “This shot is Jordy Smith, backlit in West Oz. My love for photography began in 2005 when Kelly Slater came to surf a local reef off Manly. At the time, I was using my parents tiny point and shoot, so whenever a water based job comes around I’m running around like a kid again.” 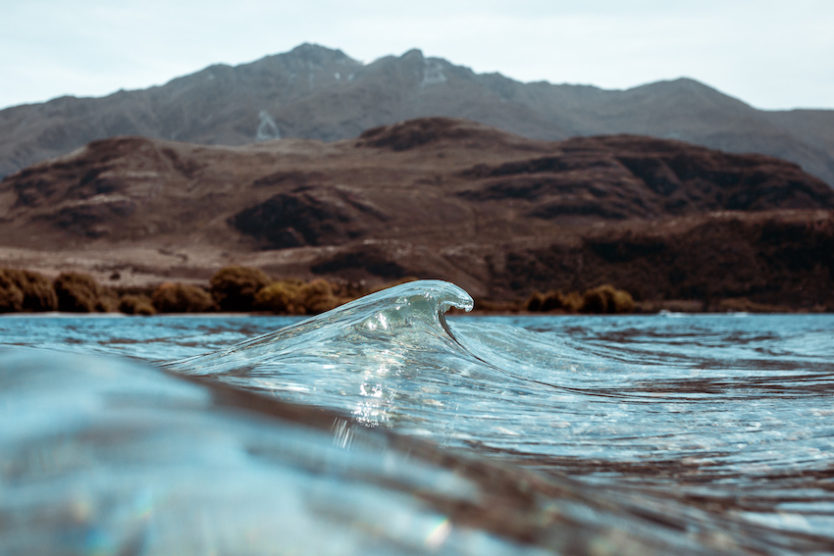 “I think a lot of Australians overlook New Zealand as a warm destination for summer. Last year, we organised a mixed group of Australians and Kiwis for a typical South Island road trip. Prior to New Years, we parked up in Wanaka and immediately got sucked into its vortex. Our planned two day stint was drawn out to well over a week in which we jet skied, swam, and hiked… but essentially drank a ton of Speights.” 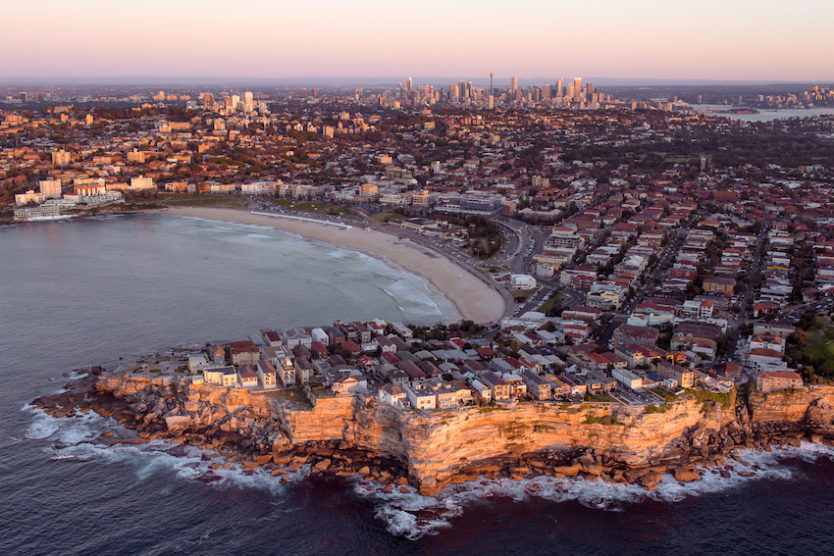 “Unknown to many, I call Sydney home. This shot was when I’d just come off the back of several months travelling for commercial work and was feeling pretty burnt out. The next logical step was to shoot something for myself – experience home from above. At sunrise, we hovered over Ben Buckler before heading North and shooting detail shots around Manly. Later that day, I had a meeting where I mentioned my morning trip. The client said she noticed a helicopter while surfing that morning. I pulled out my laptop, skimmed through some of the images I’d taken and there she was, looking up at me on her bright, pink surfboard.” 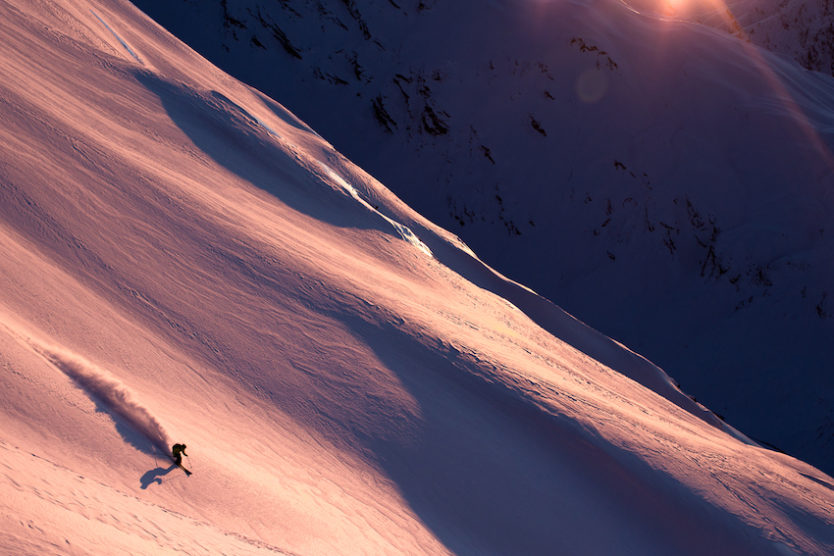 “I’ve been skiing for a year now, after being inspired by the local crew in New Zealand to give it a try. I think I’d only had about 15 days under my belt when I shot this. Once the helicopter left us deep in Mt. Aspiring National Park, I remember feeling pretty concerned as I looked down at the steep gradient below. Nonetheless, three days later I came out unscathed and overly stoked for the next adventure.” 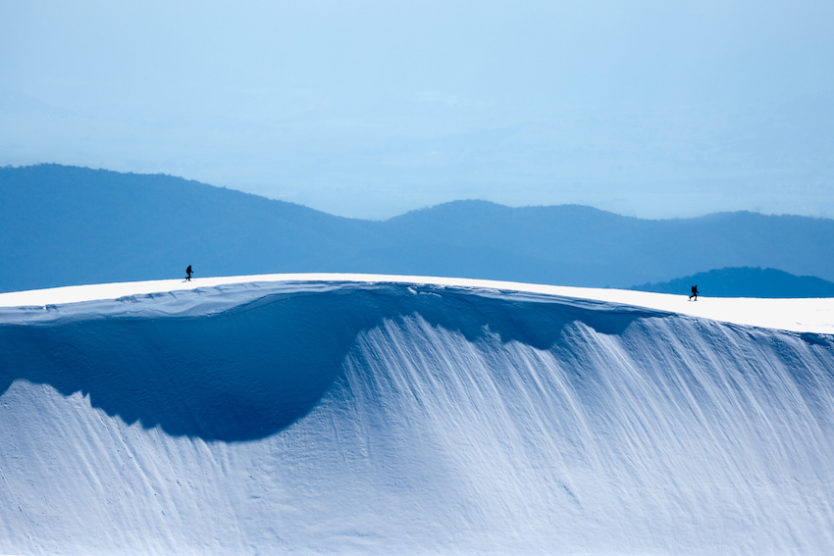 “Once home from NZ, I paired with an Australian crew to explore NSW’s backcountry. With one range in mind, we set off on an overnight mission to shoot a particular line at sunset. Once we tested for all possible variables, we waited patiently for the sun to drop, only for weak clouds to form around this peak. Still waiting, the sun was nearly below the horizon and with clouds  growing thicker we decided to call it. The icing on the cake was that after the four hour ski tour back in the dark, I blew my knee on the final hill to the car.” 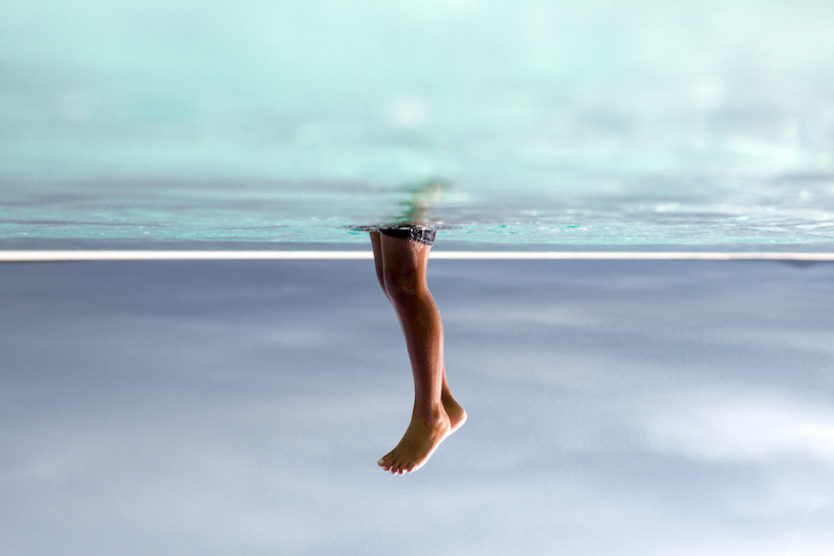 “Post blowing my ACL, I had a gig in the Cook Islands where the weather turned against us. I was hopping around everywhere in a knee brace, which was torture when trying to swim and shoot in paradise. While staying on Aitutaki, we had a short window of light which worked really well against the moody Pacific storms. Trouble in paradise.” 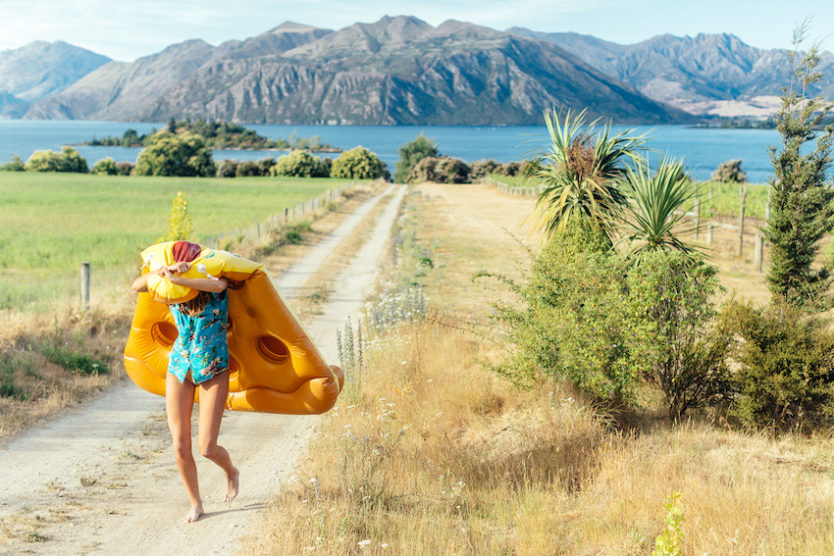 “‘Sabertoothpolarotterbearing’ was created several years ago by a group of Kiwis. Really just another excuse to party around New Years Eve. This year, more than 100 people floated out to Ruby Island that you can see in the photo, on a bunch of floats for a day party. My feet were burnt for weeks after. Next year I’ll be wearing shoes.” 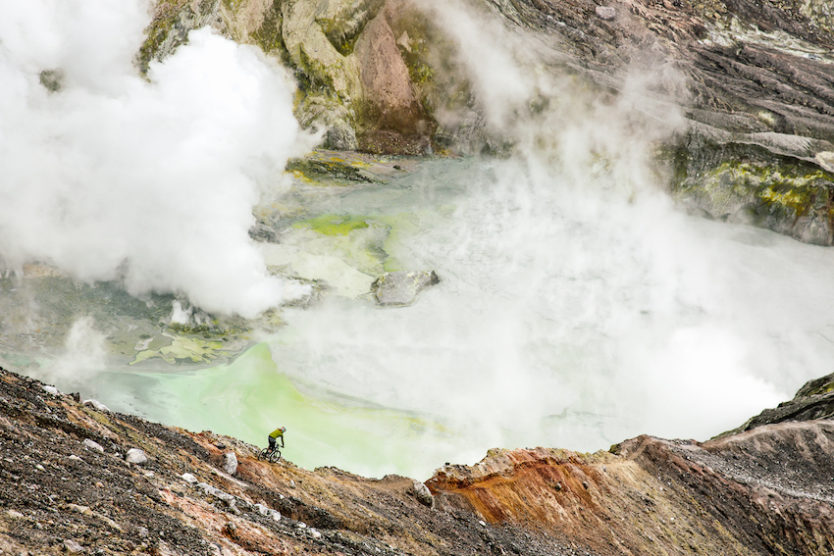 “Earlier this year I worked alongside Colab Creative, a production company who wanted a bike rider jumping around an active volcano on White Island. Kelly McGarry was the man for the job and absolutely nailed it. Only weeks before the commercial aired, Kelly unexpectedly passed. A huge loss for the mountain bike scene and for anyone who had ever met such a legend.”