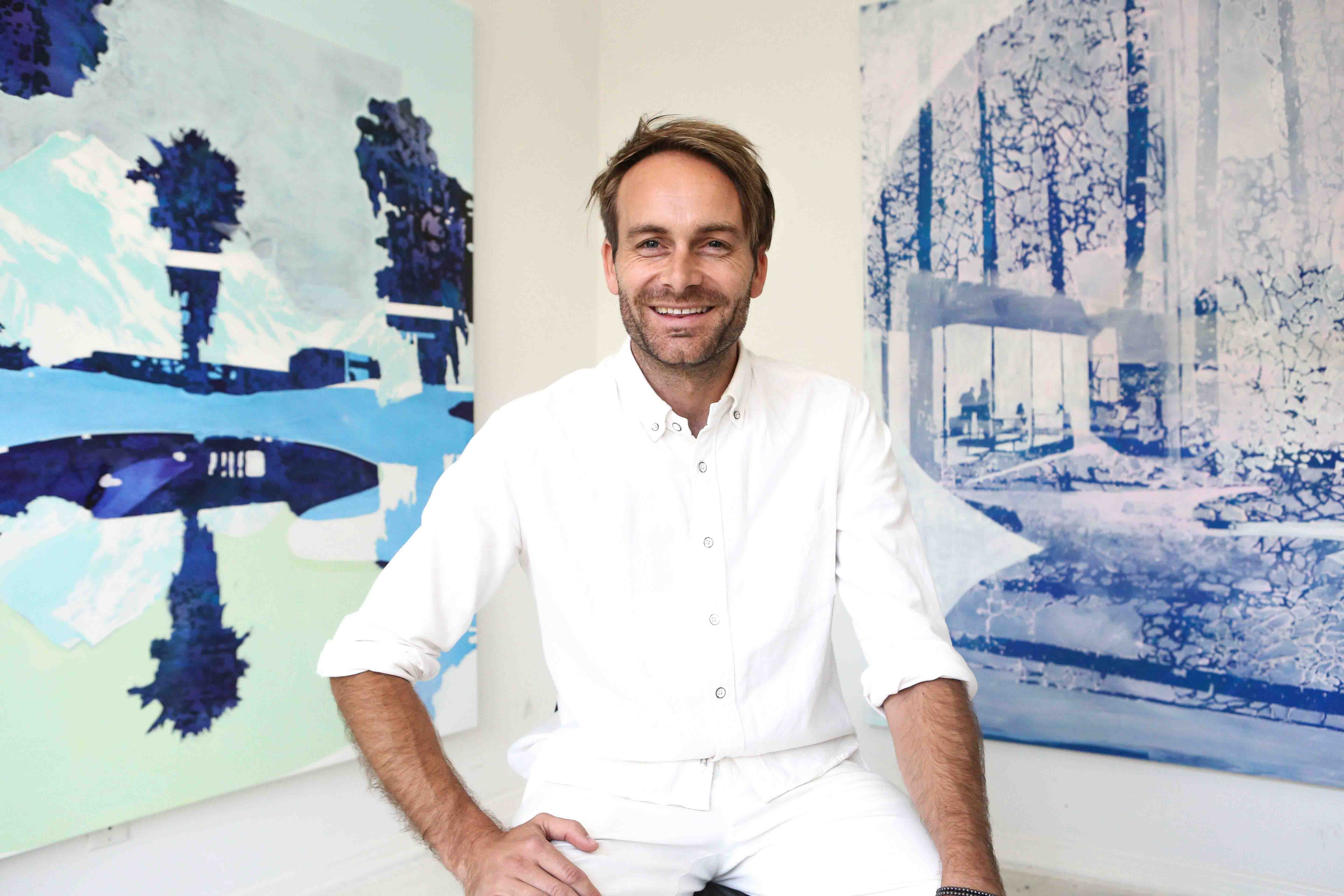 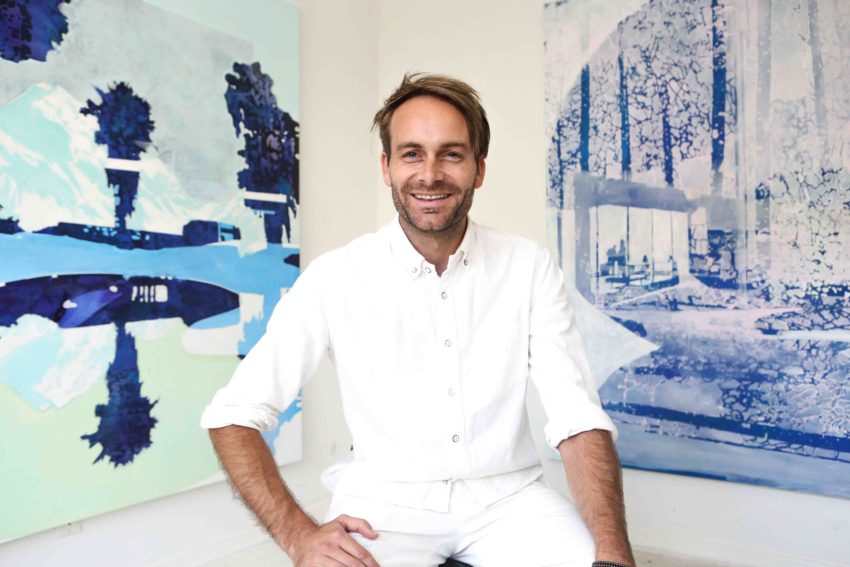 If patience is a virtue, then Paul Davies is a saint.

The Australian born, Los Angeles based artist spends more time contemplating and creating his work than most of us spend living at one address. His paintings first exist as photographs, which he leaves hanging in his studio for up to six months before deeming them worthy for use, only to then become intricate stencils, painstakingly cut by hand. The end result is art you wish you could physically visit—houses whose front doors you want to open, yards you yearn to BBQ in, pools you pine to dive under… you get the gist.

The driving force behind every piece of Paul’s work is memory, and how it compares to the reality of something. Whilst such a comparison seems more like a duel between mind vs. actuality, his works show no sign of struggle. In fact, they seem to bring about a sense of peace. On the heels of opening his latest exhibition, ‘Life Stills’ at Melbourne’s Sophie Gannon Gallery, we talked with him about process, his favourite memories, and operating a scalpel blade with a hangover. 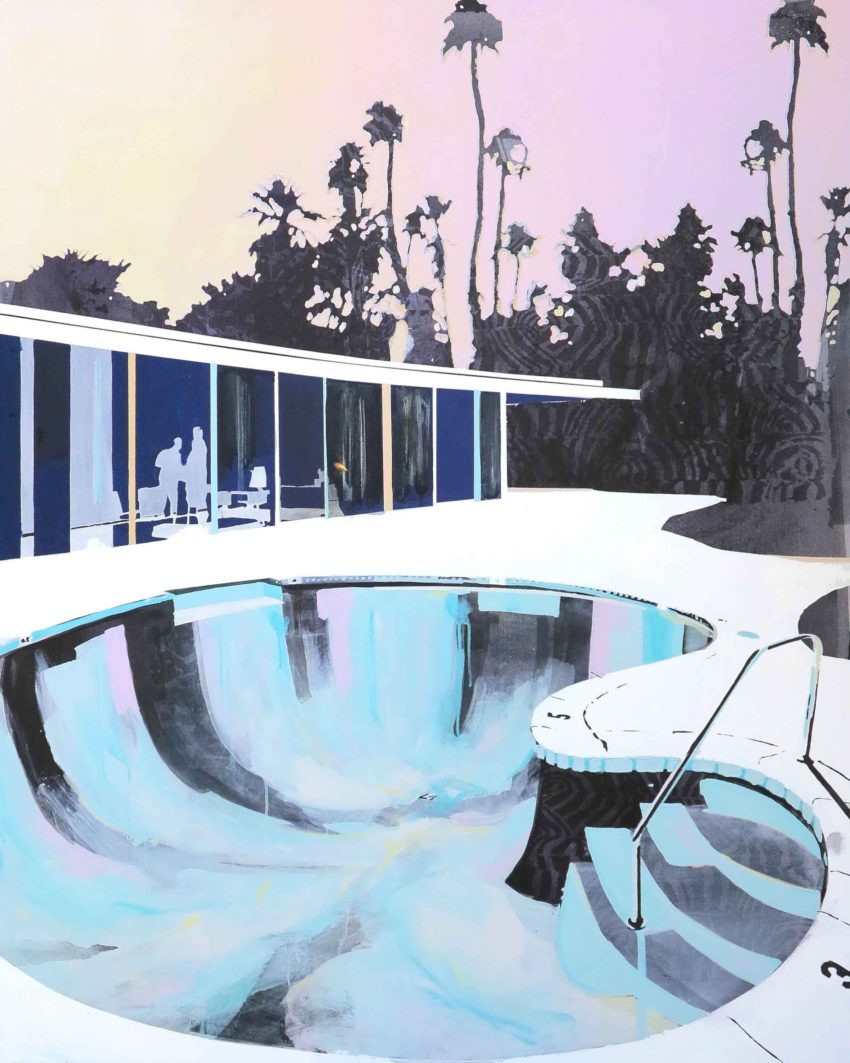 Your paintings start as photographs, which are then made into stencils. Can you explain your process?

Sure. So, the overarching theme of my work is memory. I am comparing what the camera records with what you remember of something happening. So I go out and take photographs of different places—places that I research and want to photograph or places I just stumble upon and find interesting, and then I print a bunch out and put them on the studio wall, and if I still like them in six months or so, I start to use them. What I do from there is I enlarge them so they are the size of a poster, and then I cut a stencil, or a screen, out of the photograph so it’s cutting away all the shadows or all the negative space using a scalpel blade, and that’s the part that takes really long, because it’s all hand done. So it’s using my memory of the photograph and then I’m cutting back into my own memory and filling it with paint.

Is 6 months a concrete amount of time before you will work with the photo?

No, it’s just usually enough time to let it settle. It’s kind of arbitrary but it usually ends up being around that amount of time because you’ve had it up on the studio wall and if it’s still talking to you and you still think it’s interesting then it’s a good sign that it’s worth turning into a painting. 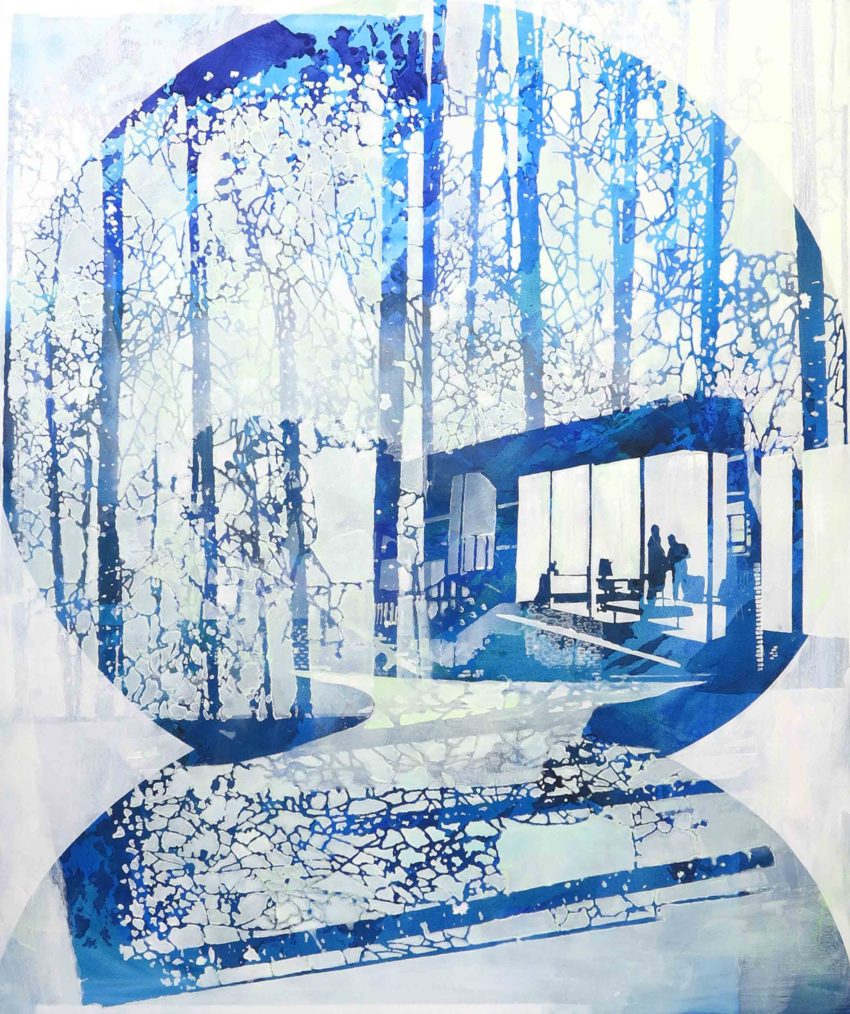 Your colour palettes are always interesting—how do you end up with such different colours in a piece when you can see the real ones in the photo?

I think that it’s all intuitive. So, I try to make the colours as incorrect to nature as possible, like blocking out the sky so that it’s green and then the pool will be pink or something like that, which doesn’t make sense but because its based on a photograph it’s still rational image, like the content makes sense but it’s more of an emotional, intuitive thing. And that’s really just trial and error, I don’t set out saying it’s going to be this or that colour. Because they’re painted in layers, quite often I’ll go through five or six colour combinations before I get to the image. And if you look closely in the work, you can see the previous layers that have been built up through that process.

Obviously your move to Los Angeles has heavily influenced your work—what is it about the city’s aesthetic that inspires you so much?

I like that it keeps tripping you up—you think that you understand part of it but then it just throws something else at you. I also like that it’s linear and sprawling, rather than vertical. The kind of idea that there are corners, and every time you turn a corner you see something new, and so that, for me, and I think a lot of creative people, is interesting because it presents different challenges. 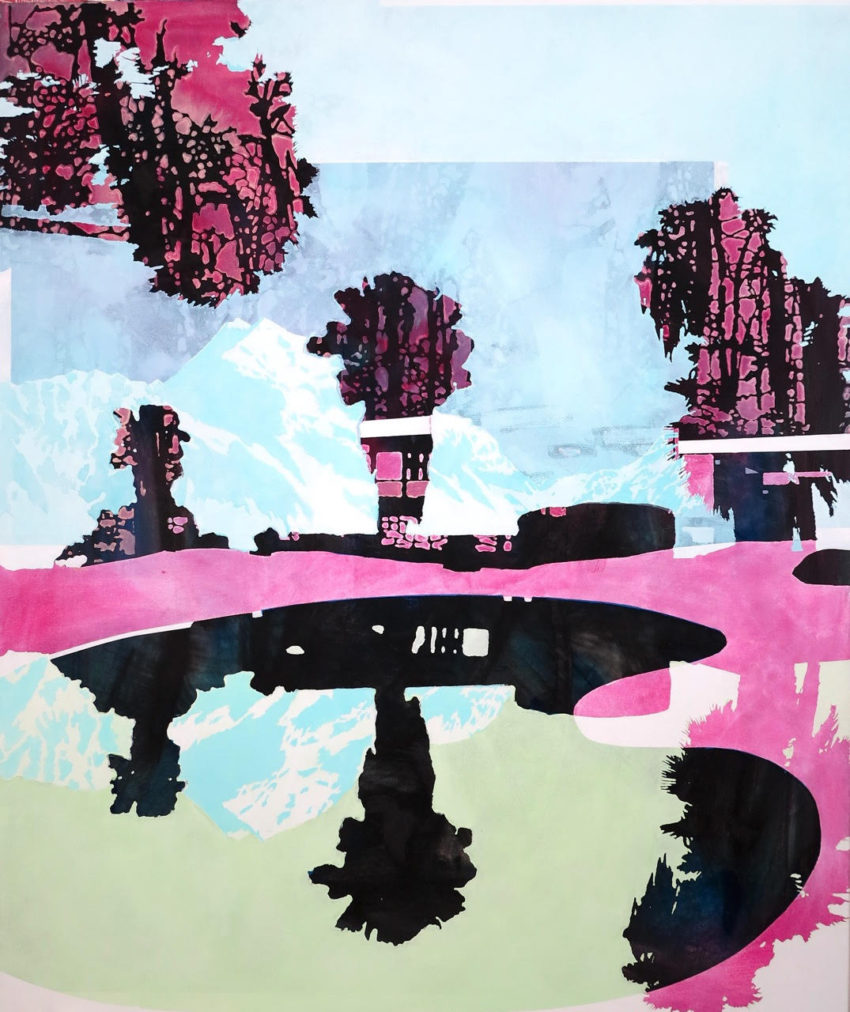 Have you ever painted your own house?

My mum lived in this house in Lismore for a little while and I painted it, but like all of the pictures that I do, it was a combination of elements—so I took a picture of her house and then I pimped it, basically. I added a pool, and put palm trees in it and mountains behind it.

Have you ever exhibited any of the photos that you take?

Not as photos themselves, but I have exhibited some of the cut out photos that I’ve used as the stencils for the paintings. So, I will hang the stencils up and they’ve got all these layers of paint on them because they’ve been used in different paintings, and that’s been a good way to show the process of the work, and also that it’s a photograph but then when you cut away all the negative space it stops being a two-dimensional thing and it becomes a sculpture. I actually studied sculpture at school because I failed painting. 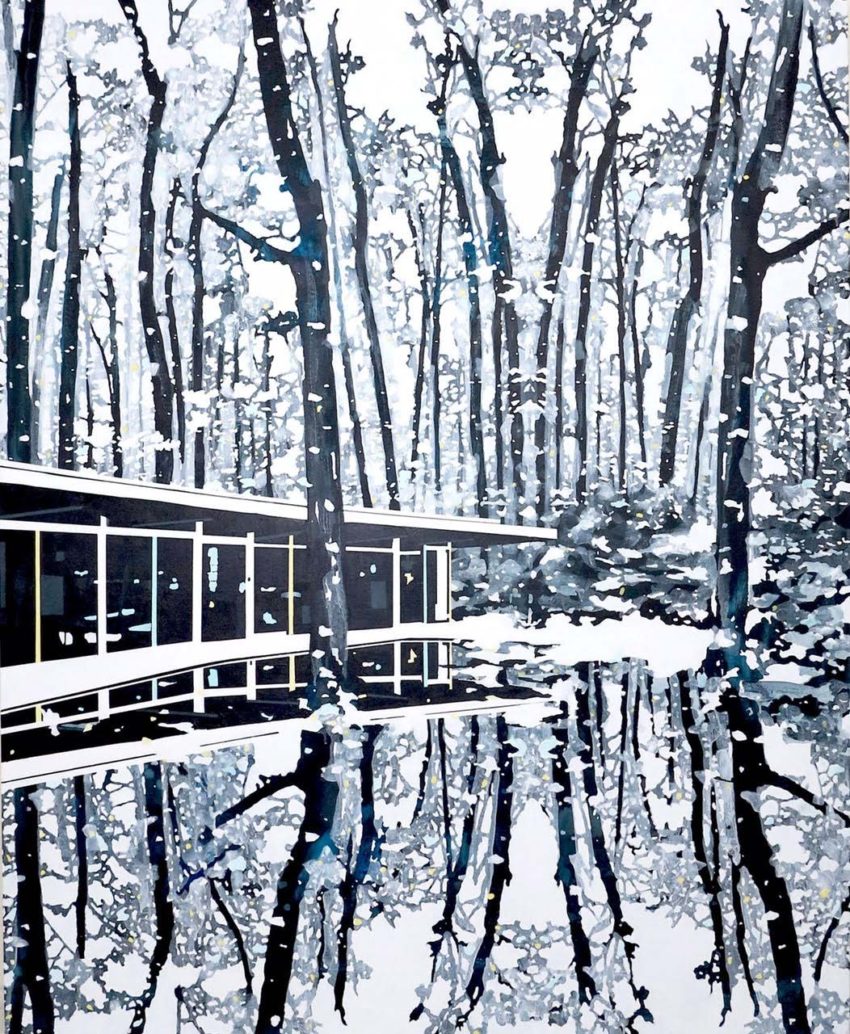 If your work is all about memory, what is one of your favourite memories from the last year?

My residency in Phoenix at Frank Lloyd Wright School of Architecture. That was for the whole month of February, and was where I did those photograms using the sunlight. It was amazing because they put you up for the month, and they award six a year so I was really lucky to be awarded one. It’s so hot up there—even though it was coming out of winter—and it hardly rains, and it reminded me of Australia as well. So I used that idea of being away from home and then being in a new place both having this really strong sunlight and I used that as the main point for those works where they were using sunlight instead of paint but still the stencil to make these works and I did one a day while I was there.

What time of day has the best light?

If I had to chose just one time of day, there’s a weird time when you’re down near the coast and you’re driving along—it might sound cliché, but along the PCH—sometimes there’s a haze there and they call it a marine layer, but it’s basically just fog and mist. But it sits there and then burns off during the day, but if it’s sunny and that mist is still there, it creates this really weird kind of filter over everything. If you’re down on the coast in the morning when it happens, that’s pretty cool.

The stencils you cut are really intricate; you must have such a steady hand. Have you ever tried to work hung over?

Ha! I try to avoid it. It just takes so long, and you need to get in the zone to do it, ’cause it doesn’t give back anything immediately, and that’s kind of one thing I like about it, that you start it and you just have to settle in and take your time, there’s no instant gratification. 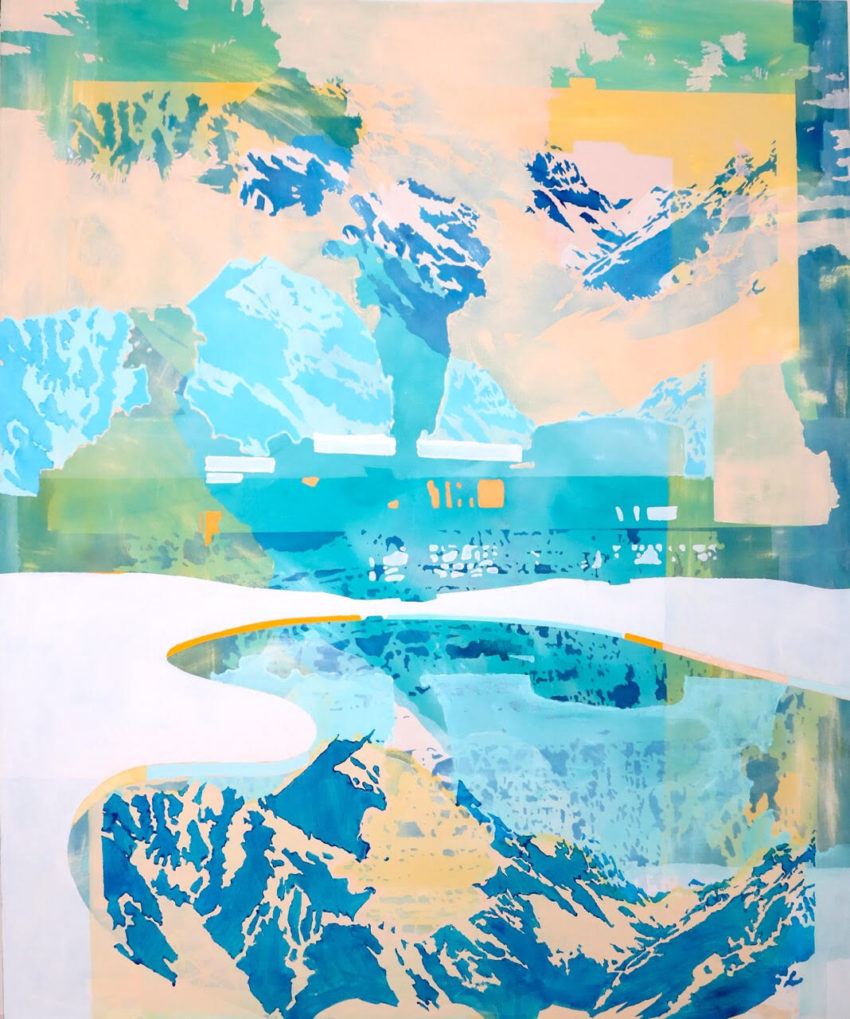