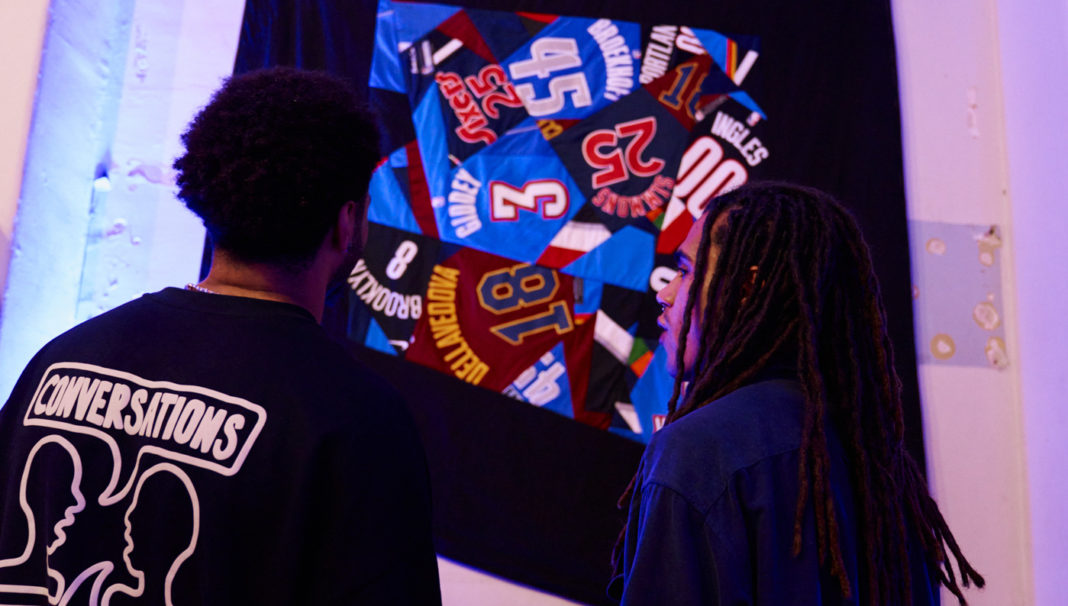 But that’s exactly what transpired when ‘NBA Gallery’, an immersive pop-up exhibition at the new EDDY space at Central Station kicked off last night. The exhibition celebrates the huge impact the NBA has had on culture as well as Australia’s not so insignificant impact on the league (Patty Mills, represent!), and features work by nine Australian and First Nations artists incorporating NBA iconography into their installations.

In basketball, there can only be one winner (for the love of God, please don’t be the Warriors again next season), but in this competition of artistic dunking there are two, and their names are Sonny Day and Noah Johnson. Sonny is a painter and installation artist from Sydney, currently based in Orange, NSW. Noah is a textile artist from Hobart, currently based in Melbourne, VIC. Both artists are exhibiting incredible work in the NBA Gallery pop-up, and although we’re not supposed to play favourites, we are, and surprise! They are our favourites. Want to know what they made, how they made it, but more importantly, who they think the GOAT is? Here you go. 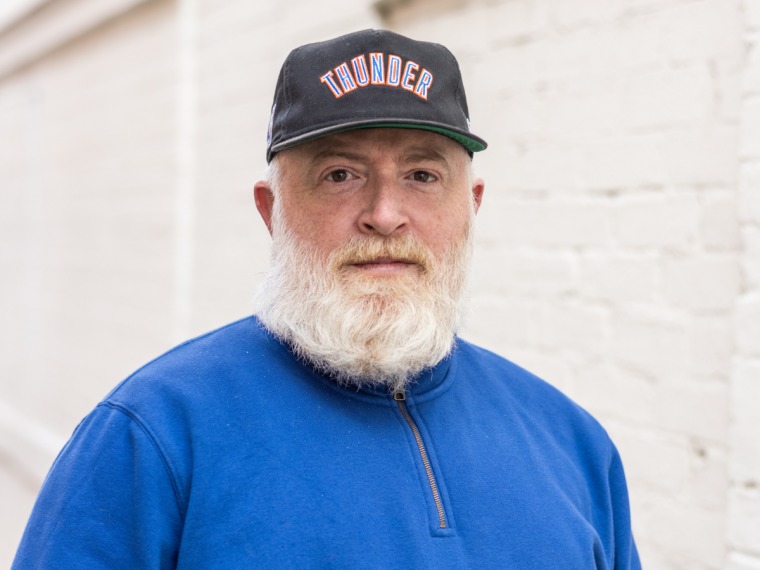 Hi Sonny! Big questions out of the way first: who’s your NBA team?

Well, thanks for getting straight into it. Based on the amount of jerseys I have of former players, I follow the Oklahoma City Thunder. Fandom can be a tricky proposition sometimes.

Until science proves otherwise, Michael Jordan is the GOAT. 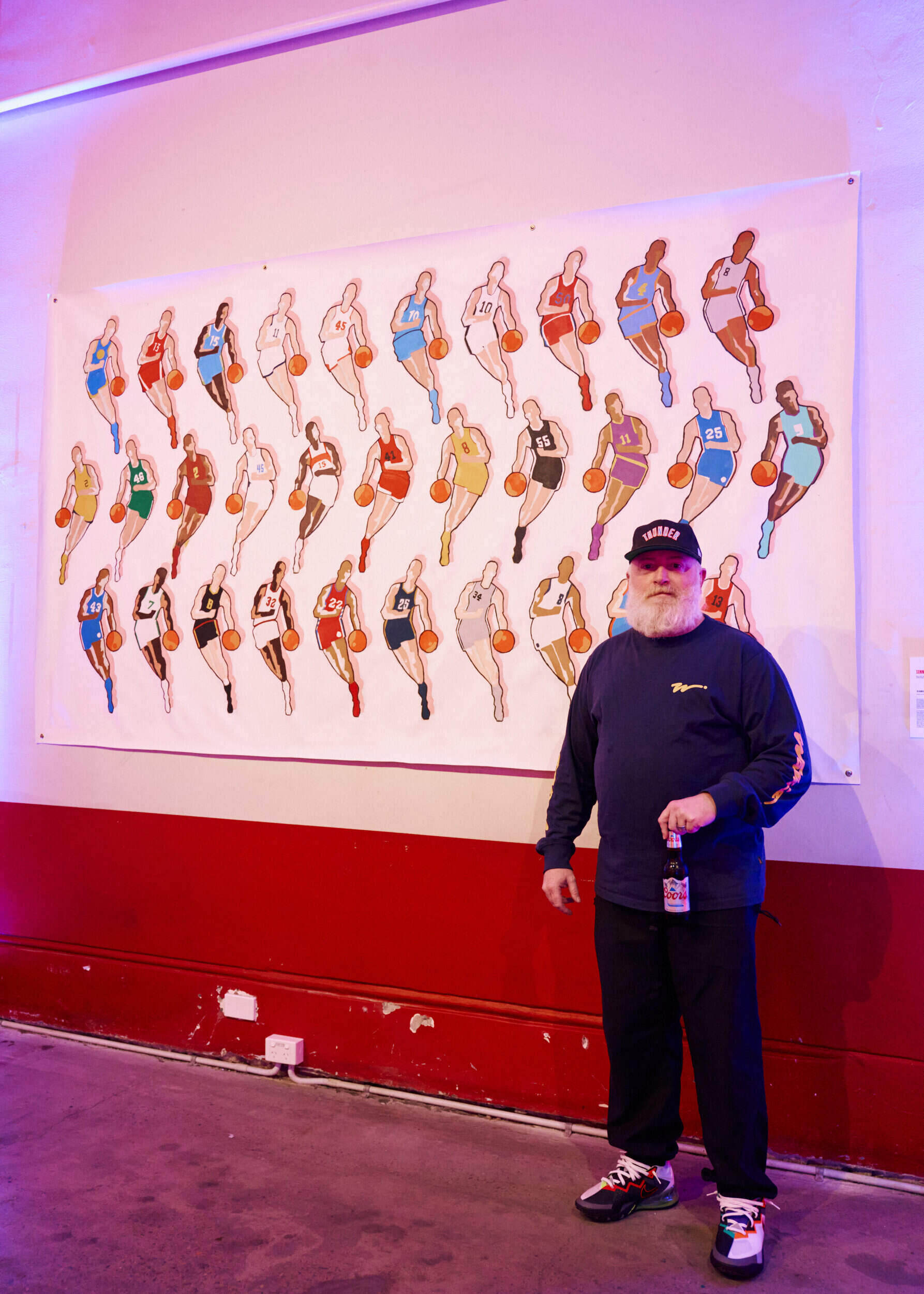 What impact do you think the NBA has had on art over the years?

I can’t point to one thing specifically, but I’d say how iconic the branding and the fashion has been. All of those elements bleeding into the mainstream, it’s cool to see the stuff from the 90s come back around. I think from a design standpoint, it was a big influence for me.

And what about the impact it’s had on Australian culture?

It’s aspirational, Australians have excelled in sports and have always made it to the biggest stages. It was incredible as a kid watching Gaze, Heal and especially Luc Longley make the leap. But right now, especially after the Olympics and the success of Josh Giddey, basketball in Australia is on another level. 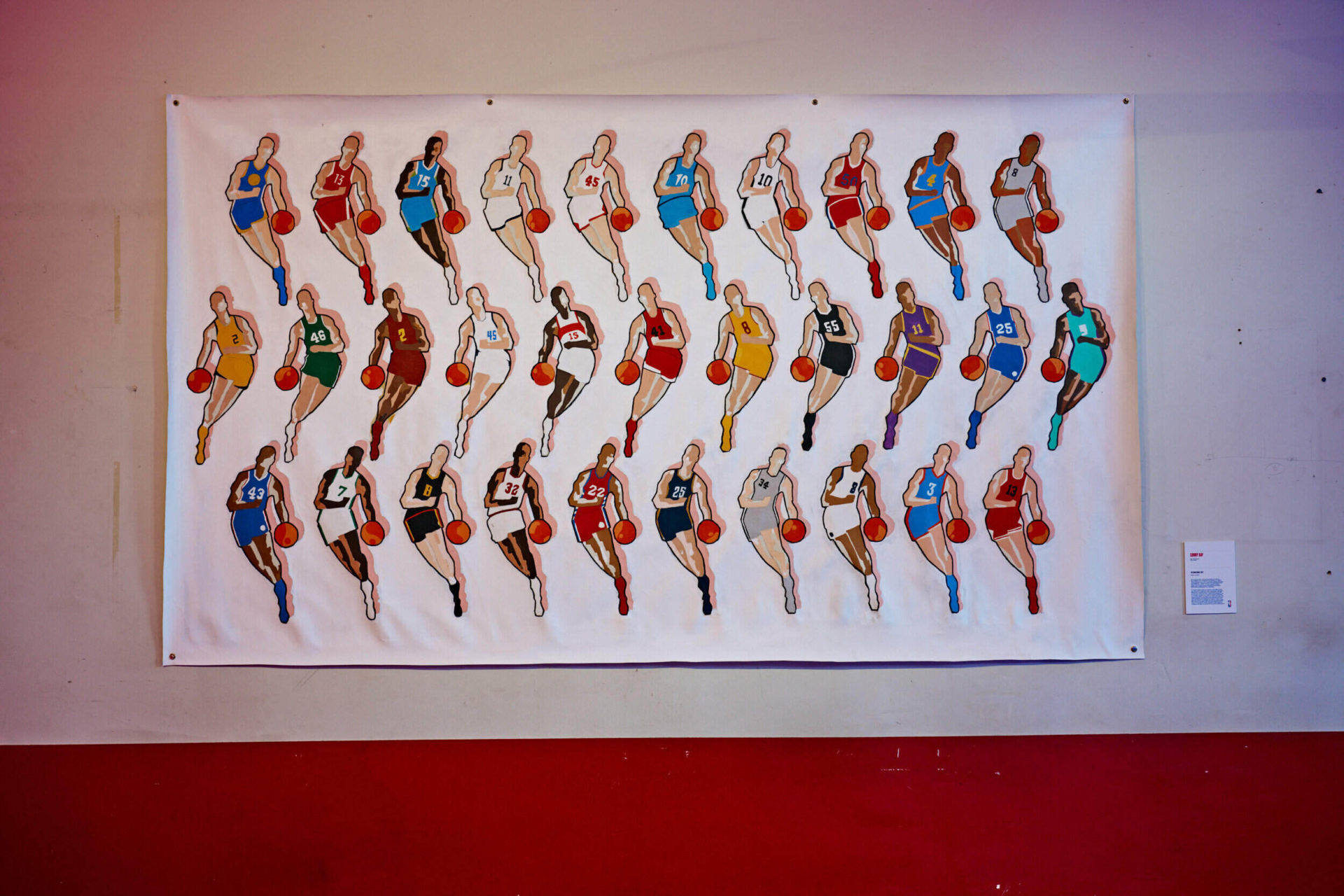 When you were commissioned for the NBA Gallery pop-up, did you immediately know what you wanted to do for it?

Well, yes and no. The work that got me on their radar was these customisable basketball jerseys I made for an event. At the time, the timings for the show didn’t allow me to go down this route, so I decided to still focus on the jerseys of the Australian players.

Can you talk us through what you created, and how it came about?

Well, it seemed like a good idea at the time. I’m painting the largest canvas I’ve ever worked on. It’s pretty straightforward concept-wise, it has representations of most of the Australians who made it to the NBA. For me, the best part of Australia is our diversity and how that diversity can inspire and motivate us to reach our best. Some of these players have reached the highest highs in the game, while others have played only minutes. The thing being, that no matter their backgrounds, they were good enough to play in the NBA. You know how good you have to be to play in the NBA? I think pretty good! 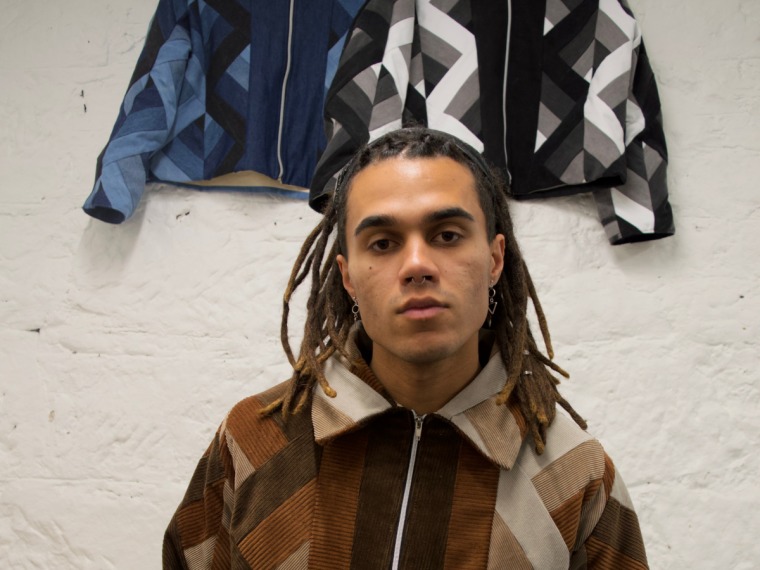 I’ve always been a Boston Celtics fan as that’s my family team, as well as the team my uncle, Dennis Johnson, won two championships with.

My favourite current player would have to be Shai Gilgeous-Alexander of the OKC. I just like his game, his swagger, and what he wears on and off the court.

It’s Michael Jordan. Not even a question. 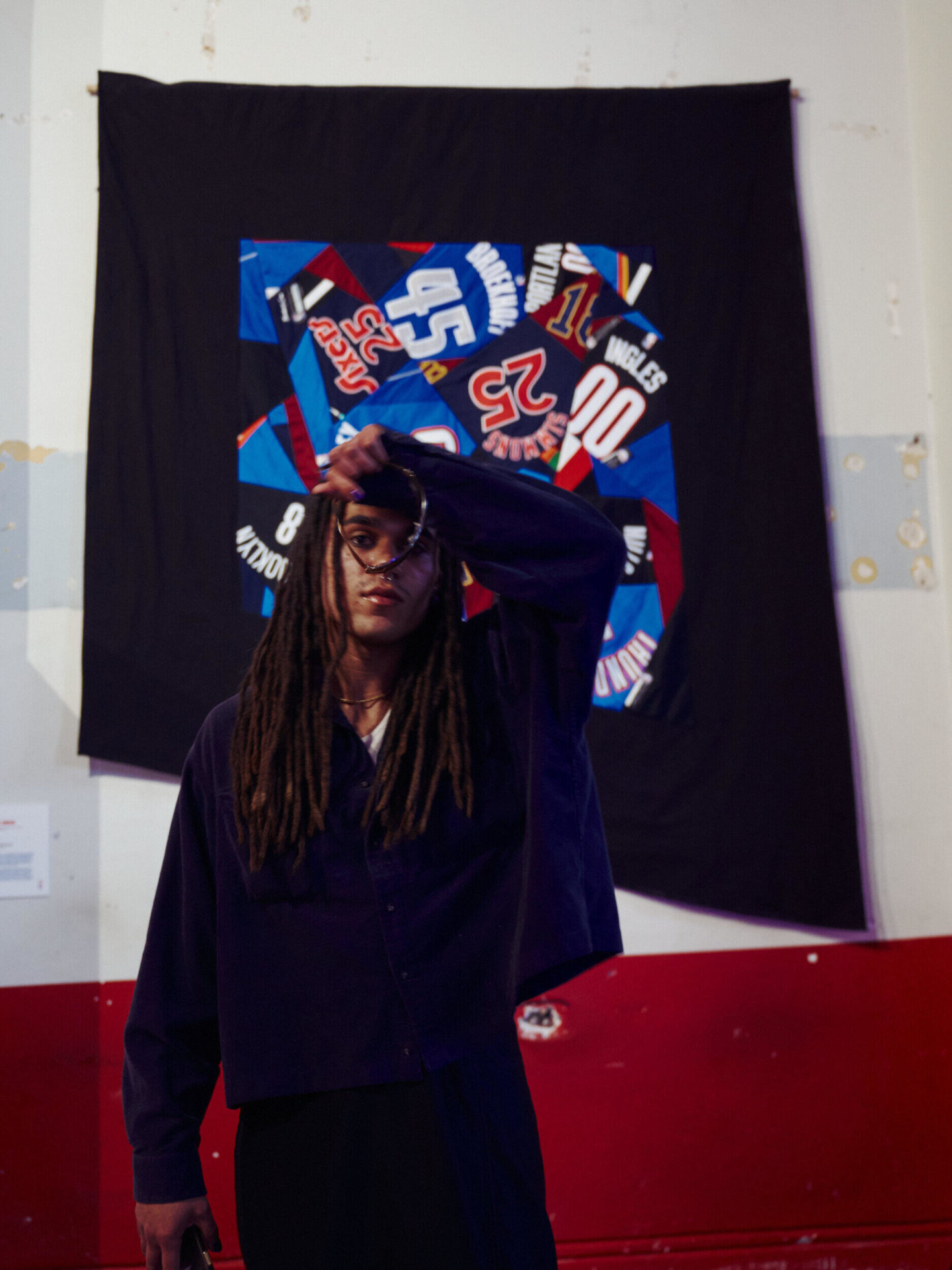 What impact do you think the NBA has had on fashion and design over the years?

I think specifically NBA footwear, be it shoes created or just heavily worn by NBA players, has seemingly reached the mainstream now. From the early beginnings of the NBA, players were wearing Converse Chuck Taylors, then to the Jordan line and the mainstream adoption of the Jordan 1 and 4, in particular. We’ve seen a lot of these models, colourways and designs be integrated into everyday people’s wardrobes instead of their basketball kit. Even Kanye’s inspiration for the Yeezy 500 sneaker came from a basketball shoe design, which I think is pretty spectacular because of Kanye’s influence on mainstream fashion and culture.

So much of what you do draws from the past. There are so many great eras of basketball to revisit—aesthetically, do you have a favourite?

I would have to say my favourite era would be the 80s to early 90s. The colours of the jerseys were unmatched, and I think the fit of their uniforms are my favourite to date. The more fitted jerseys (along with the short shorts) make me laugh, but I know for a fact I’d rock one of those uniforms. And to be honest, I see some of the current players rocking those shorter shorts the past couple seasons, and I mess with it. 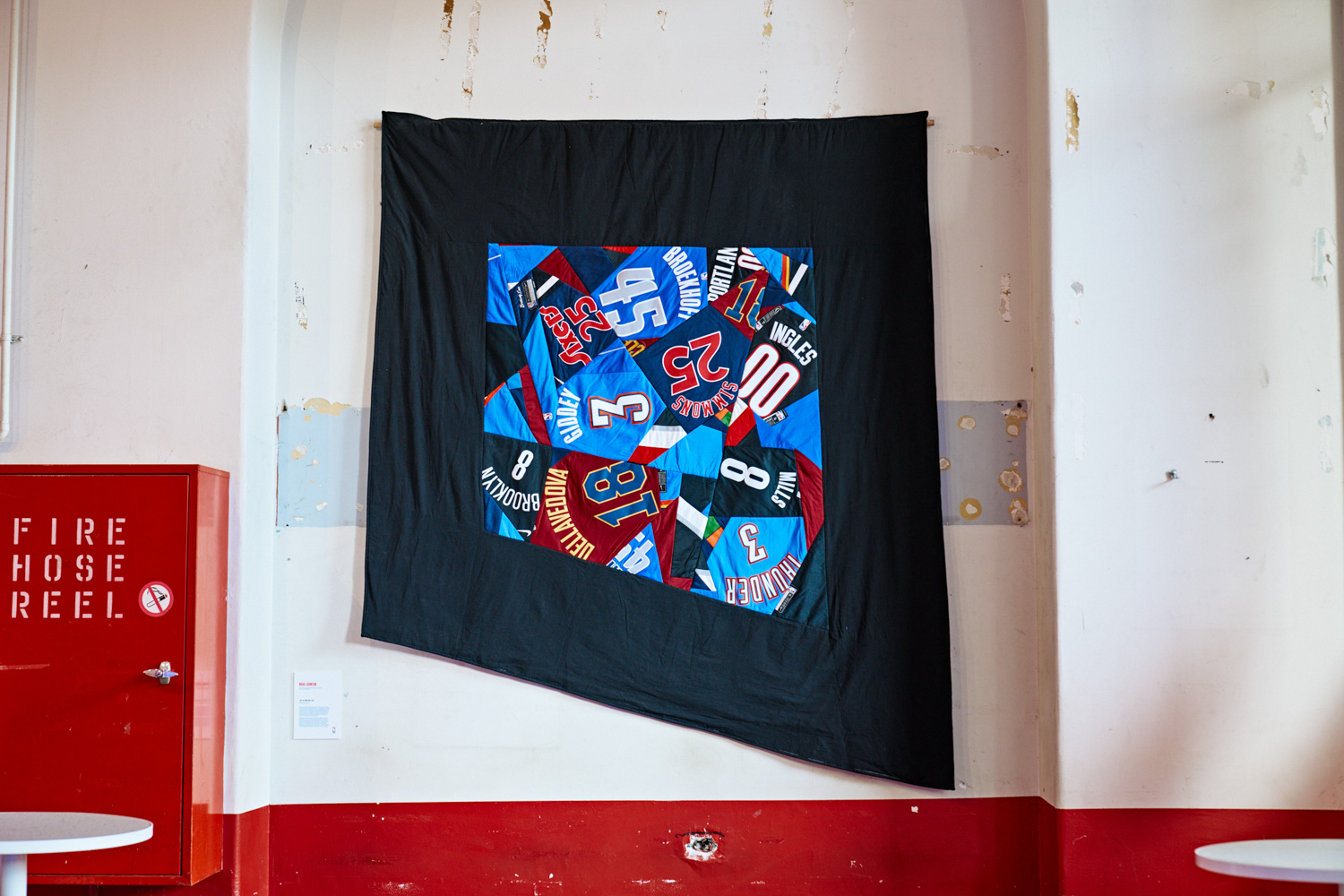 Can you talk us through what you created for the NBA Gallery pop-up, and how it came about?

I created a patchwork quilt made from Australian players’ NBA jerseys. Although I didn’t include all Australians that have been or are in the league, it still strongly represents the high achievers that are currently playing at that level. As well as just having an aesthetically pleasing patchwork quilt to either hang or put over your bed.

Finally, can you please tell us how to cop anything from your label, ONEOFONE ARCHIVE, before it sells out 0.01 seconds after it goes up?

I think the great thing about my label and how I create ‘slow fashion’ is that it gives a sense of rarity to my pieces, as well as urgency because they are one-off, so people really do have to be quick. I like to keep my brand personal and small and therefore me strictly making the clothes is something I like for my brand and want to sustain. 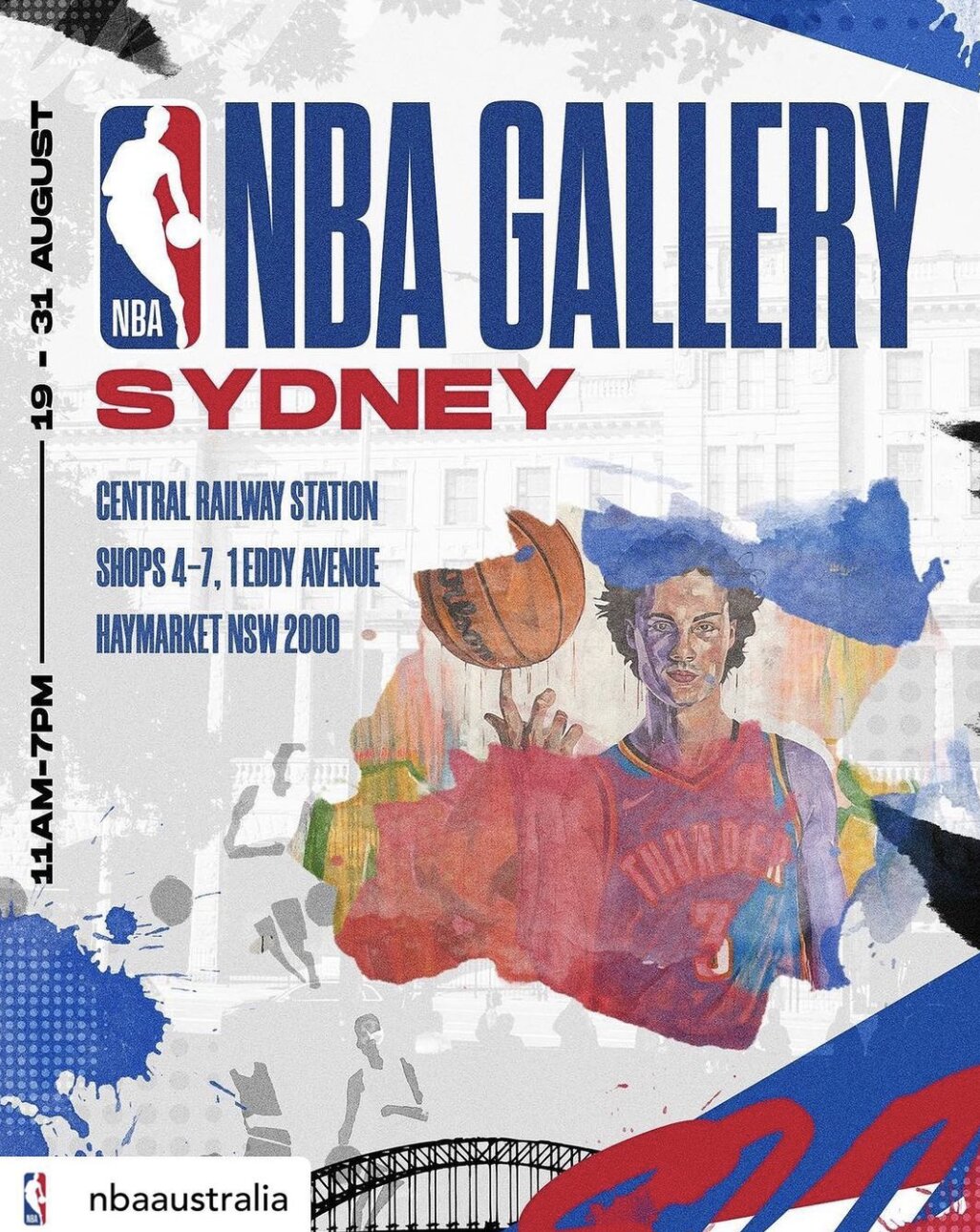 NBA Gallery at EDDY is now open until Sept 1.