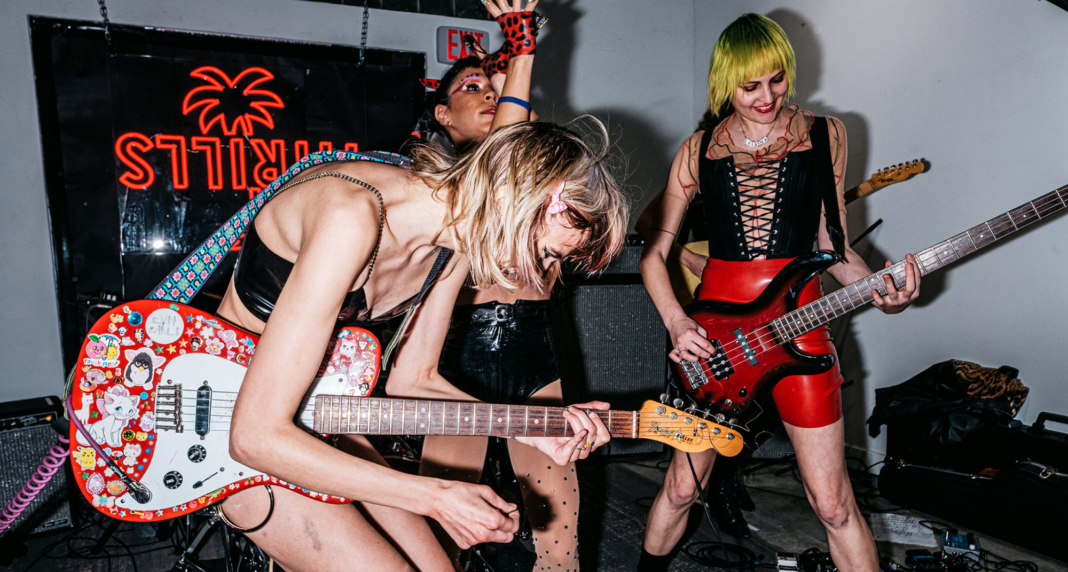 Scrolling through cumgirl8’s Instagram, it’s hard to identify exactly what I’m looking at.

Is it a feminist meme account? A hypersexual anarchist art collective? A page promoting sex workers’ rights? Turns out cumgirl8 are a lo-fi experimental punk band formed in New York by a trio of top-models: Lida Fox, Veronika Vilim and Chase Noelle. Or, as Lida puts it, ‘cumgirl8 is a superhero alien amoeba entity that orgasms to achieve enlightenment.’

As you might expect, Lida, Veronika and Chase are a posse of strong, outgoing women who have an instinctive ability for performance. Often clad in elaborate and unique homemade outfits, they’re wacky, outspoken, and empowered in their displays of sexuality. When I ask how they want to be perceived by their audience, Chase answers, ‘We want them to be turned on or terrified. Hopefully both.’ 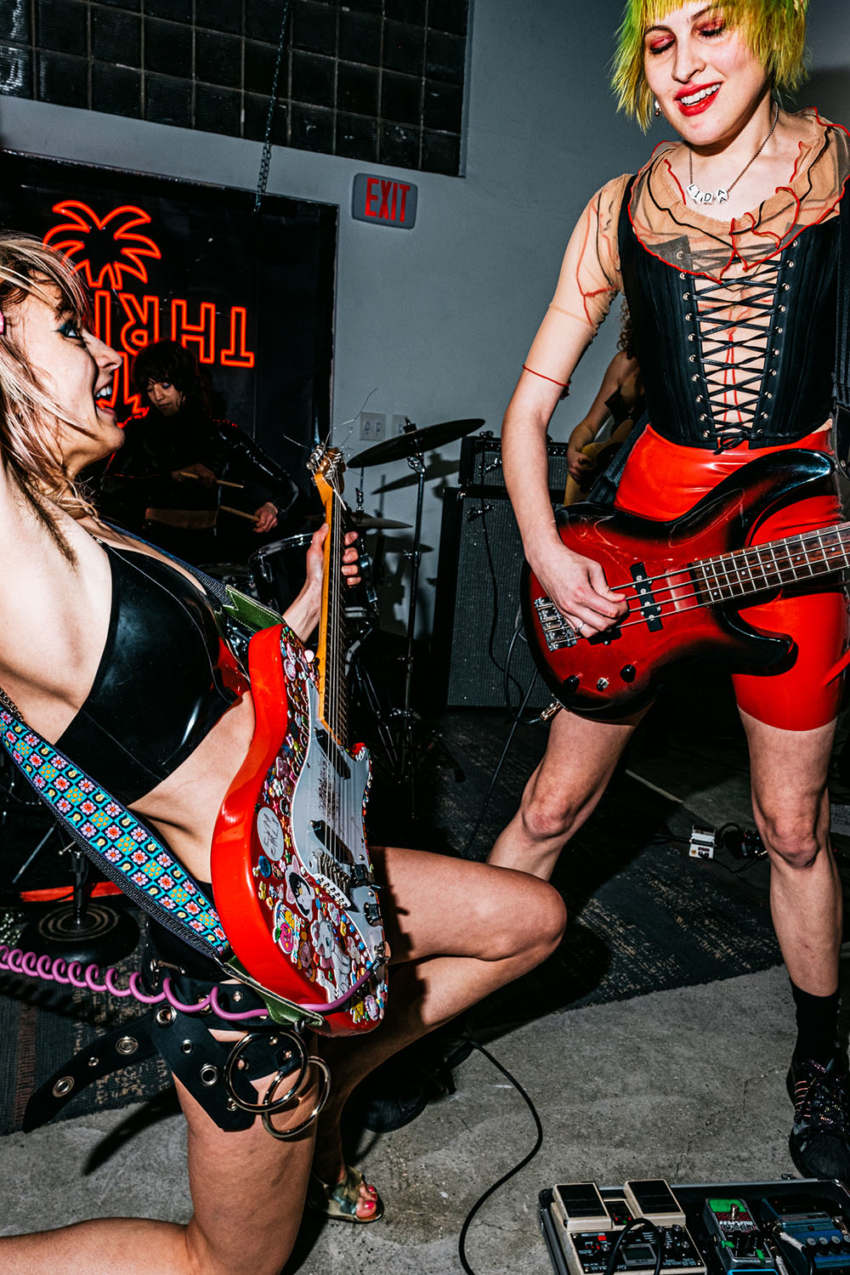 The band started as ‘a therapeutic project’ when Veronika and Lida got access to a friend’s jam space and started playing around on some tracks. It was a free and creative medium where they felt they could experiment and, Lida says, ‘also just dish on our issues and frustrations’. The pair met about ten years ago through modeling, working with big names like Hedi Slimane at Yves Saint Laurent, among others. Chase, who plays drums, completed the cumgirl8 lineup and, since meeting Veronika and Lida, has been doing more modeling as well. She describes it as, ‘an extension of performing and using my body and props to image our politics.’

The name, cumgirl8, is a nod to sex positivism and female pleasure, a playful take on the sort of screen name that a cam-girl might use on OnlyFans or OkCupid. Veronika explains that they toyed with the choices of smartgirl8 and gumgirl8 before settling on cumgirl8. ‘Then we all looked at each other and were like, actually cumgirl8, ‘cause gum isn’t our vibe. We’re more hardcore than that.’

Chatting to the three women who make up cumgirl8, it’s not long before Lida brings up Burger Records, the California indie label that recently shut its doors permanently after a groundswell of sexual abuse and pedophilia claims were made against bands, as well as management, at the label. The majority of claims came through an Instagram account called @lured_by_burger_records (content warning on that link), which published allegations from numerous women about a toxic culture of abuse at Burger. The label issued an apology, then one of the founders stepped down, then they attempted to change their name, and eventually, the label shut itself down completely.

The demise of Burger helps to explain the context for the song ‘Hourglass’, on which Lida sings, ‘Don’t think you can turn a blind eye to the things you’ve done/ Don’t think that you’re entitled to what’s mine for the sake of your fun/ Don’t try to walk around it, you’re the sand in the hourglass now.’ 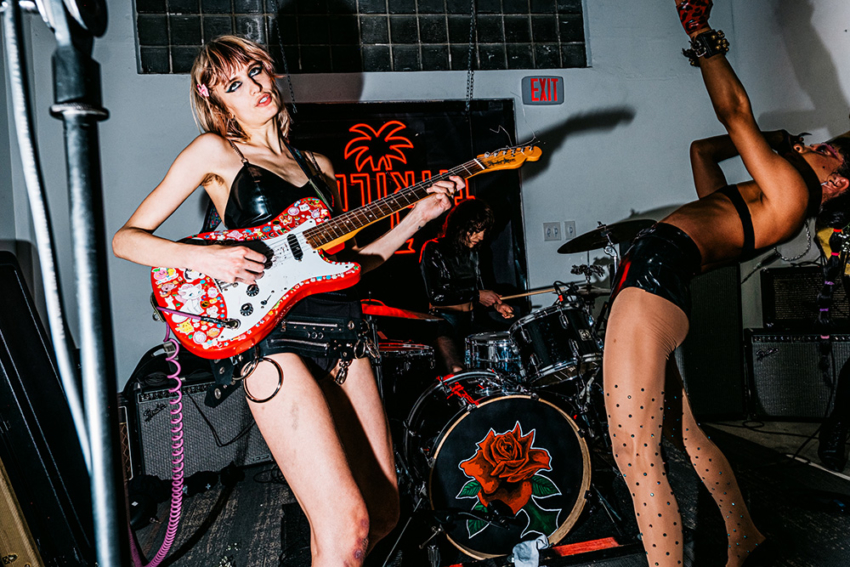 Lida tells me that those lyrics are directly related to that pocket of the music scene and abusive men in the industry more generally. She says, ‘Not Burger only, but in general, the type of behaviour I have dealt with from men throughout my life. I wrote those lyrics in 2018 after attending a show in LA [the band she saw wasn’t on Burger], and I was feeling defensive and overwhelmed by my cumulative experiences.’

She continues: ‘I admire the people coming forward to share their abuse; the reports are not surprising but relatable. I have some issues with cancel culture and public shaming but I think this action is necessary to pave the way forward. It was only a matter of time, and it’s only beginning… Sand in the hourglass.’

Sexuality is a big theme of cumgirl8, both with respect to abuse and empowerment. In a feature interview celebrating International Women’s Day this year, the band explained, ‘Some people think that because we call ourselves cumgirl8 and flaunt our bodies, that it gives them a pass to objectify us… They think that overt sexuality is an invitation to say crude things, cross social boundaries, or assume that we don’t respect ourselves. But we act like this because it makes us feel powerful. There is nothing degrading about being in control.’

Their responses are poised, irreverent and sometimes funny, like when Lida says she’ll shave her armpits for $4000. I ask if these messages were designed to satirise how men treat women on the internet but the girls clarify that all the messages were real. ‘People are crazy,’ says Veronika.

The 1-900 was also the medium through which they released the film clip (shot and edited by Adrian Hurtado and cumgirl8) for ‘Waffles’, a catchy song led by a deep bassline, wailing guitar noises and plenty of cowbell. Lida sings about all sorts of breakfast items and in the video, the girls are seen stomping raw eggs with bare feet, shopping for groceries and eating donuts, mukbang style. It’s a bizarre, visually arresting film clip and probably another comment on the many expectations put on women.

One of my last questions for cumgirl8 is about sex work. They reference it in their name and on various memes on their Instagram. It seems to be something they’re passionate about and Veronika explains that a lot of her friends are sex workers. ‘It really bothers me how there is no protection for them. It is real work and should not have a negative stigma around it,’ Veronika explains. ‘There will always be sex workers and it should be normalised.’

‘Sometimes I feel like just being female-identified and out in the world is sex-work,’ adds Chase. ‘There’s always some kind of transaction of power because of the power of the pussy.’ 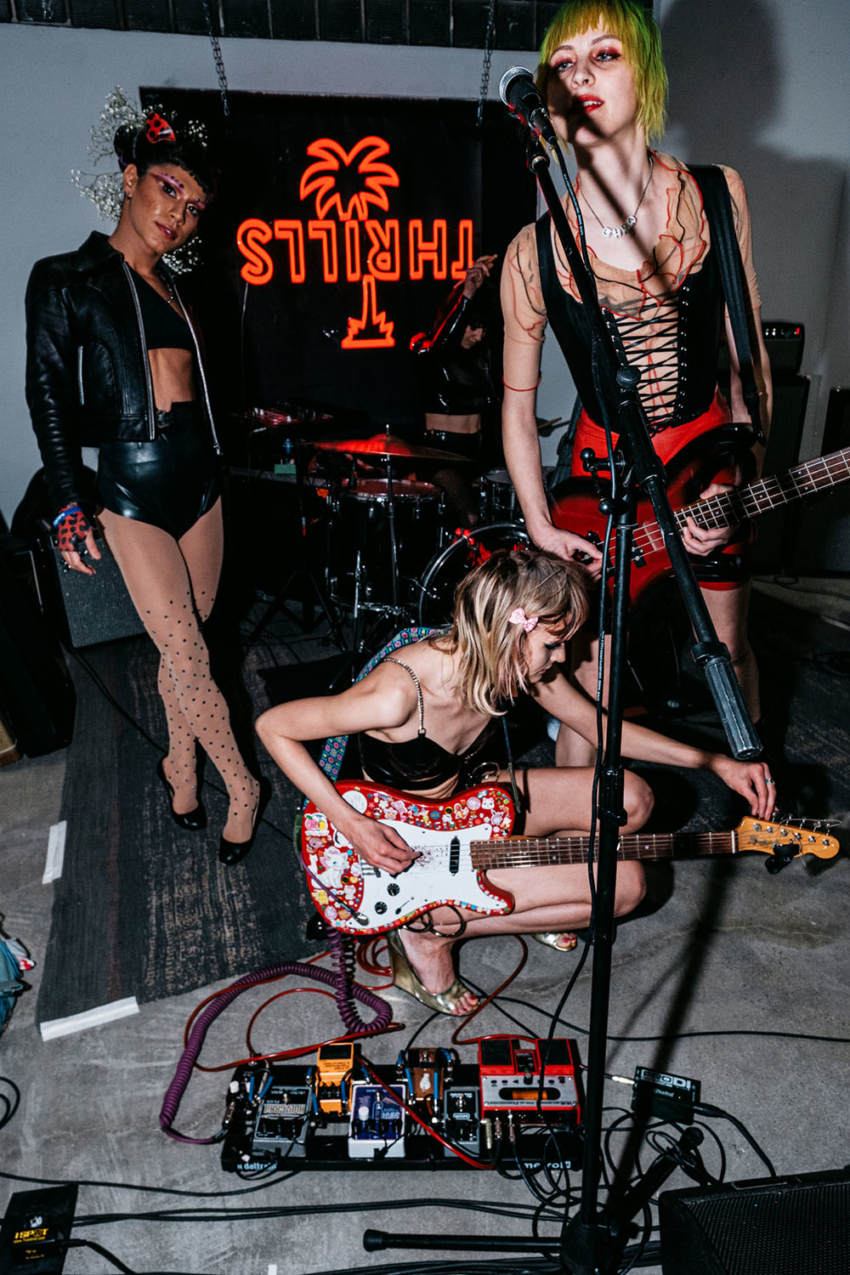