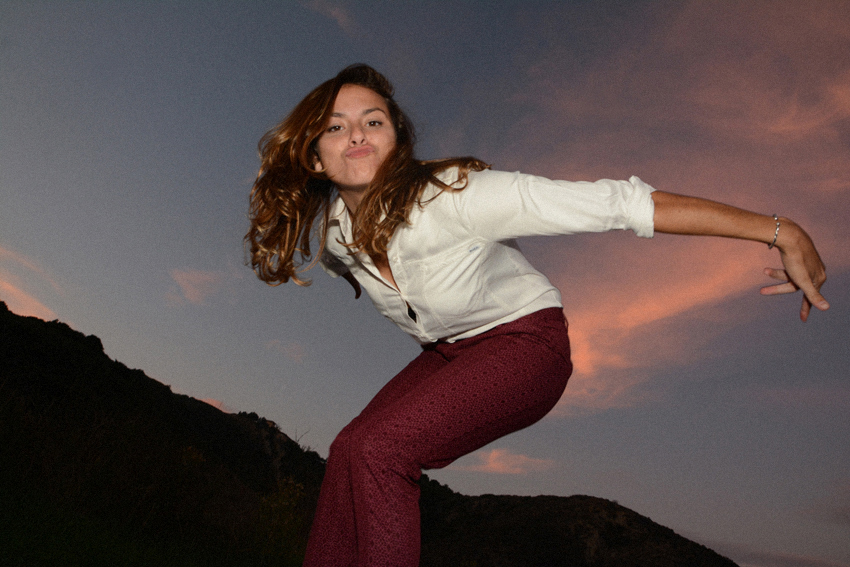 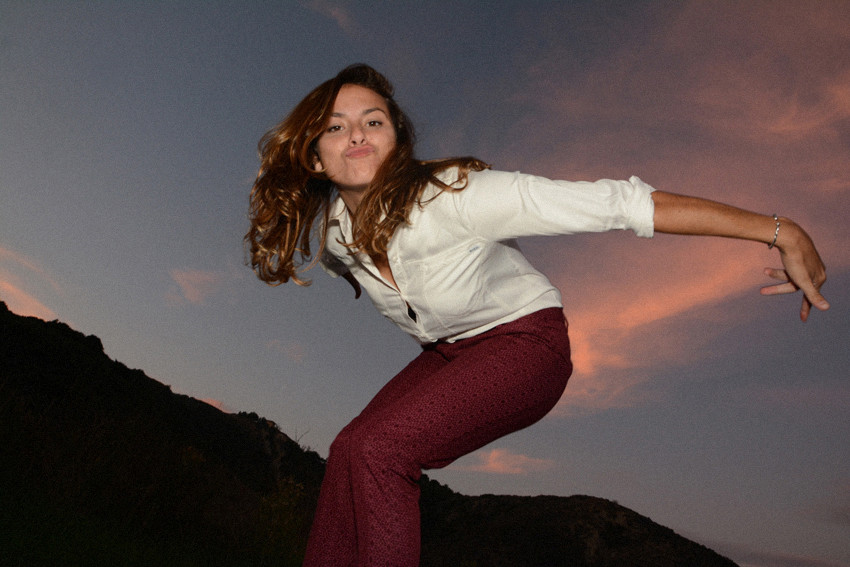 Nora Vasconcellos is constantly inventing ways to have fun.

I’ve seen her surf, go to work, skate a pool, film a part, climb a tree, cut a rug, and then paint a painting all in one day. She brought me hiking and almost immediately got hit in the face,  bleeding and laughing as the interview keeps rolling. Nora works smart, pushes hard, and is here to show So-Cal what she came for. It’s serious fun. 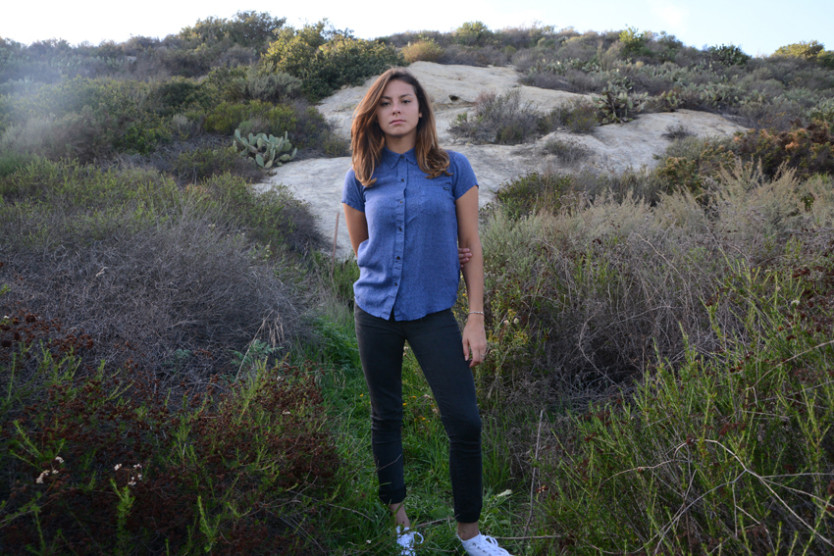 Hi Nora! Let’s start with your stats and sponsors?

You started skateboarding as an activity in-between surf sessions. Why else?

When I was growing up I used to watch Rocket Power on Nickelodeon. It was a cartoon about kids who did action sports and I wanted to be Reggie Rocket. She was the only girl, she was always right, and she was super good at skateboarding. I was really active as a kid and would watch the X games, but I wasn’t really into skateboarding myself until I was 12 or so. It was around that time that I was really into surfing, but because of where I lived, it wasn’t very accessible. I would drive myself crazy watching surf videos all day, then I discovered skateboarding. 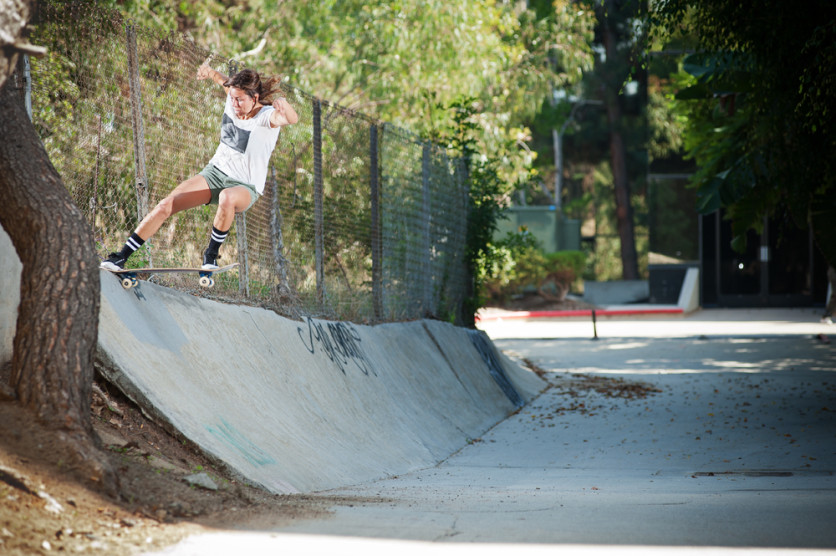 Tell us a story about your hometown?

I have so many stories from Massachusetts. When I was in high school I worked in the town over at a grocery store. Wednesday nights I had to pull the whole store which includes stocking items and making the shelves presentable. Luckily, I finished the job early and was up at the front. My friend on cart duty comes running and says “Steven Tyler just paid me $200 to stand outside and hold his dog!” So sure enough when I’m bagging, Steven comes in with his like, eight foot tall girlfriend and they come up to the checkout. It’s required to ask a shopper, “Do you want your meat in plastic?” and he was like, “Oh young lady… I wouldn’t expect YOU to ask me that” which was really uncalled for but he shared his pita chips with me which was sick. 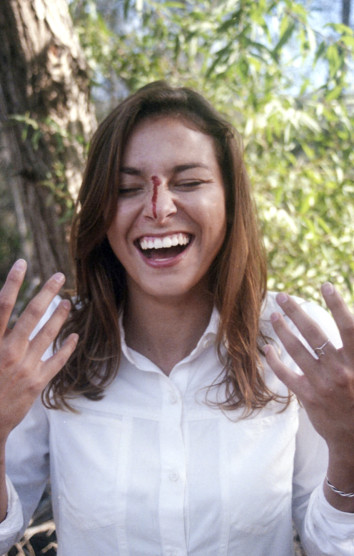 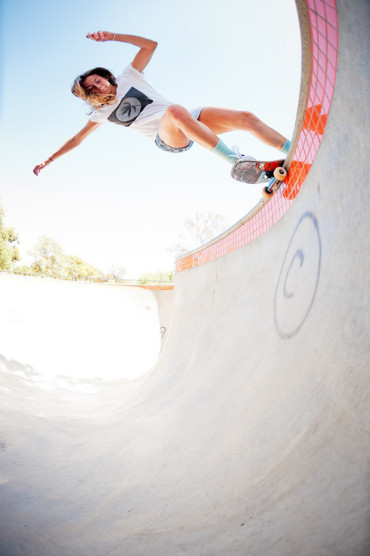 Coming from the East Coast, what gets you excited about the West Coast skate scene? Everything is here. Living in Southern California I feel like everyone I know knows someone either working in the industry or someone who skateboards all the time. It’s more of an everyday occurrence, whereas in other regions it’s not as common. 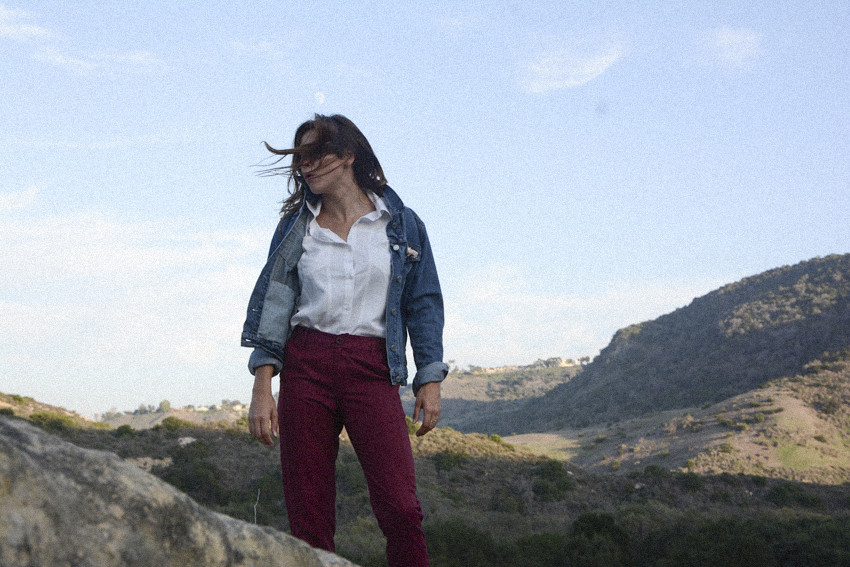 What is laughable or doesn’t make sense to you about SoCal skate scenes?
Everything! (laughs.  I find there are a lot of pretentious attitudes, even with kids who don’t skate, a lot of people come here because it’s the place to be. I think people take skateboarding way too seriously. It’s not supposed to be an elitist sport, at least it’s not that way for me. That’s what’s really cool about being in a place where there’s so many different people skating. It changes all the time, skateboarding kind of eats itself, creating this big weird circle. Styles go out and come back but there’s something for everyone to try and be into. 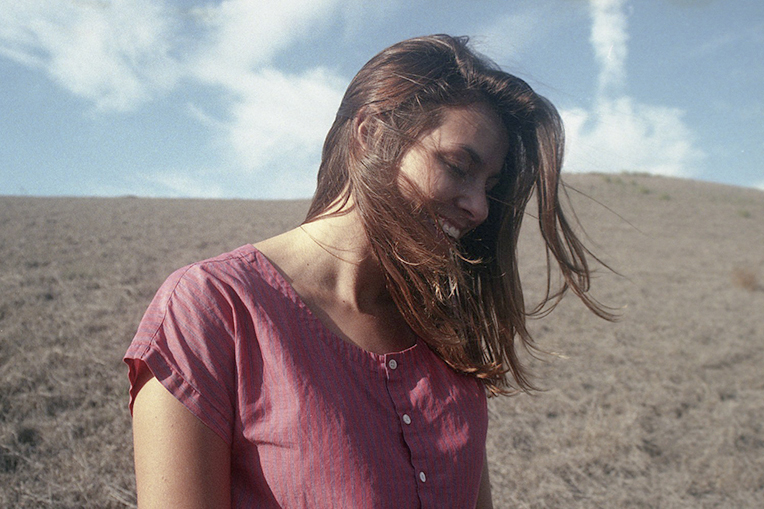 How does skateboarding influence the drawings that you make? Do you see any overlap?
Growing up there would be kids who said that they quit skateboarding or quit surfing and I never understood quite what that meant. You just don’t do it anymore? I can’t just not skateboard. It’s like when someone is artistically inclined and starts to go crazy if they can’t create something when they are so compelled to do so. When I go to a new spot to skate there’s so much to take in and so many things I want to try. Some tricks take me three tries and sometimes it takes two days of coming back to try and land it. The creative process is the same way. Sometimes I have this idea or drawing in my head and it happens instantly, other times it takes many attempts. I’m definitely the type of person who likes to approach things organically. That’s where the funny, ironic moments occur—where the magic moments and tricks you don’t expect almost always happen. I think surprising yourself is the best part. 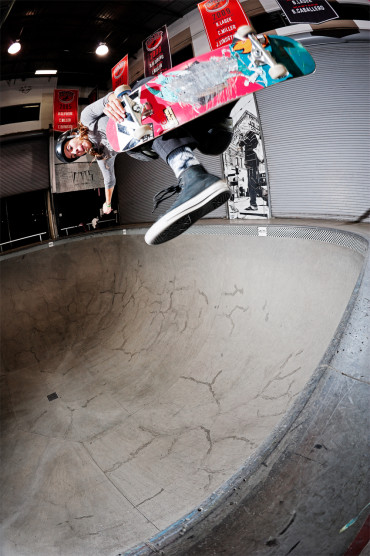 Whose style, either surf or skate, do you dig the most?

Dane Reynolds, Craig Anderson, Carissa Moore. I grew up watching way more surf movies than skate videos and I was always really inspired by free surfing, going on trips with friends and creating insane videos. As far as skateboarding goes, there’s so many people I admire. My boyfriend Daniel Vargas, I love his skating and would say that whether we knew each other or not. Grant Taylor is amazing and very cat-like which reminds me of Chris Miller. Chris will go out after not skating for months and blow your mind. Ben Raybourn. Ryan Lay. Evan Smith. The list goes on and on. 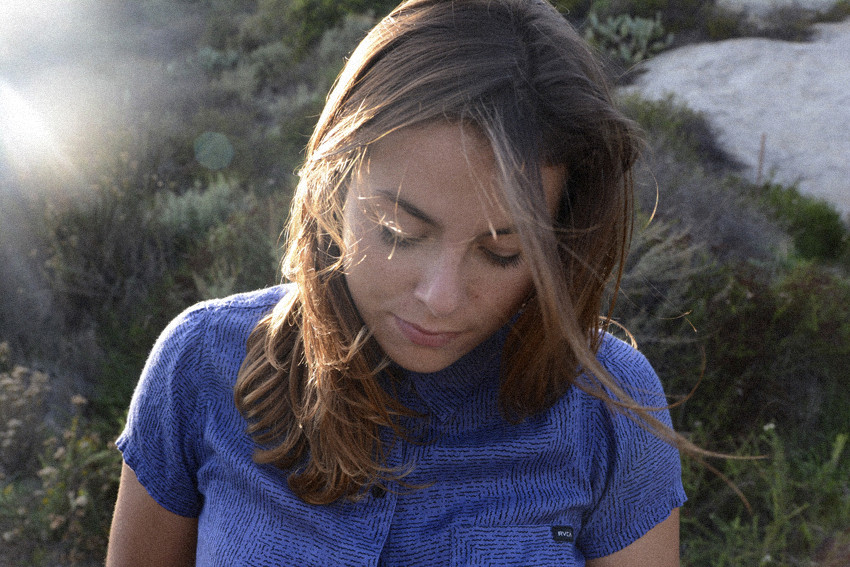 What do you find comes naturally to you?
I’ve always been comfortable with skating transition and that’s probably a result of being a surfer. I think I’m more naturally inclined as a surfer. I’ve always had to work harder in skateboarding. I was intimidated by the guys who would skate street at my local park so I would skate the bowl alone. I always felt like being in the water is familiar though. My mom was a sailor and I grew up being a water bug. There’s something ingrained in me from that familiarity with waves and the water.

You’ve traveled for X-games internationally. What was the most exciting trip so far?

Barcelona was really cool, I went in 2013. One if my favorites was a trip to Palm Springs with some girls who were visiting from Australia and Arizona. It was the first time we all went on a trip and explored as a big group. We lost a board in the desert and never found it, I’m fully convinced that aliens were involved. We swam in desert hot springs pools where I had like… a Smirnoff and a half. The water was really hot and I just lost it and became a total fool. I was the drunken water aerobics teacher. It was really fun, I love my friends. 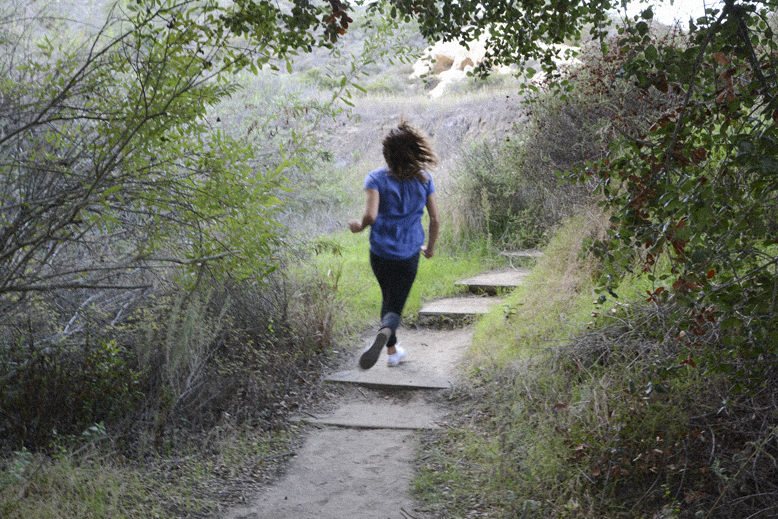 Let’s talk gender. What’s the most important thing you want to share about your experience as a female in the industry?

I think that, as with anything, it’s a matter of respect among individuals. This world is run by men and I’m not going to break this down into a feminist rant, but whether it’s people I’m sponsored by or people that I skate with, I’ve been fortunate enough to land in a place where I’m respected as a skater and not just a girl. I’m so lucky to have these people care for my skateboarding. I also think that it’s really important to be appreciative, as with anything in life. There’s a lot of entitlement in skateboarding and sometimes people act like skateboarding owes them something and I think that that is a terrible way to look at anything. I’m lucky I have friends who have the same principals as I do and are there to have fun instead of getting carried away with concerns over money or scoring free shit. Honestly no one actually needs me to sell their skateboarding stuff. They have guys to do that, and those guys are very, very good. I’m grateful that people care about me enough to do stuff for my better interest. 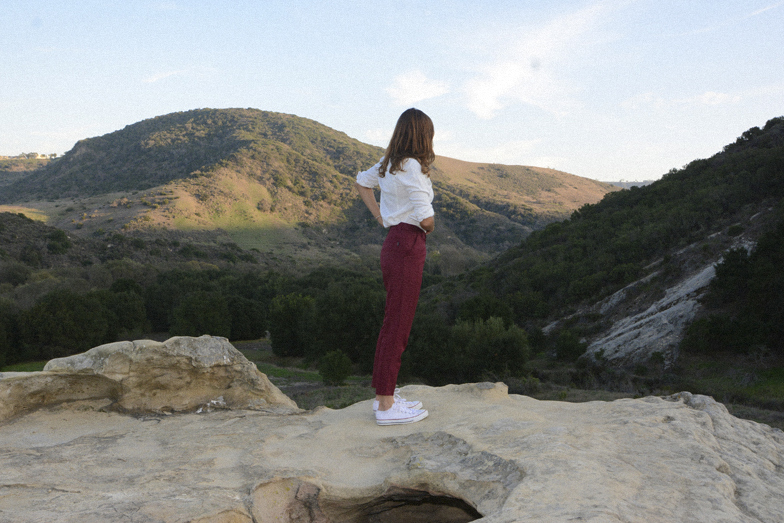 What skills or tricks are you pushing towards in sessions lately, no pun intended?

I get really excited about filming in the same way that I used to get excited about filming dorky home videos with my friends. I’ve embraced that side of myself so having my personality come through in skate parts is really important to me. It gets me excited to skate different stuff. Brandon Jensen from RVCA and I have been working on a part that’s going to be a total mix. I don’t think I’ve had the opportunity to show people exactly what I can skate in a single part. I think a lot of people knew me as the girl who works at Welcome but now it’s time for me to be a skateboarder. 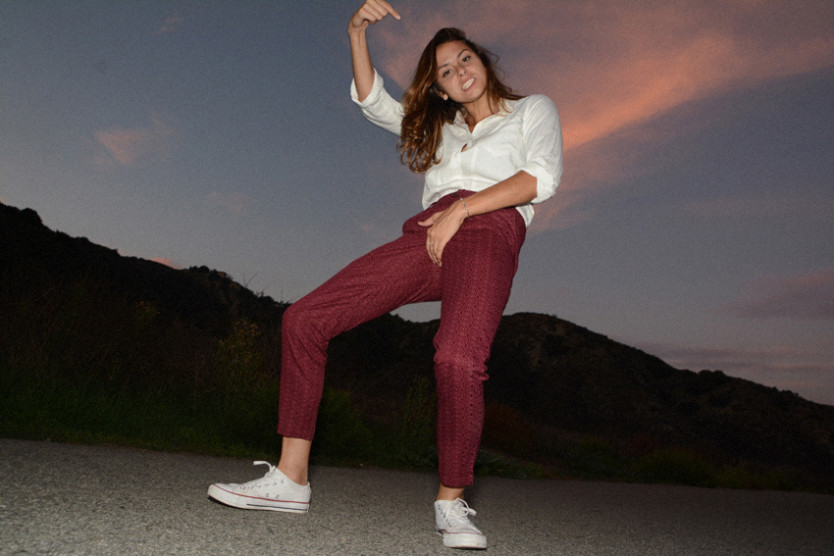