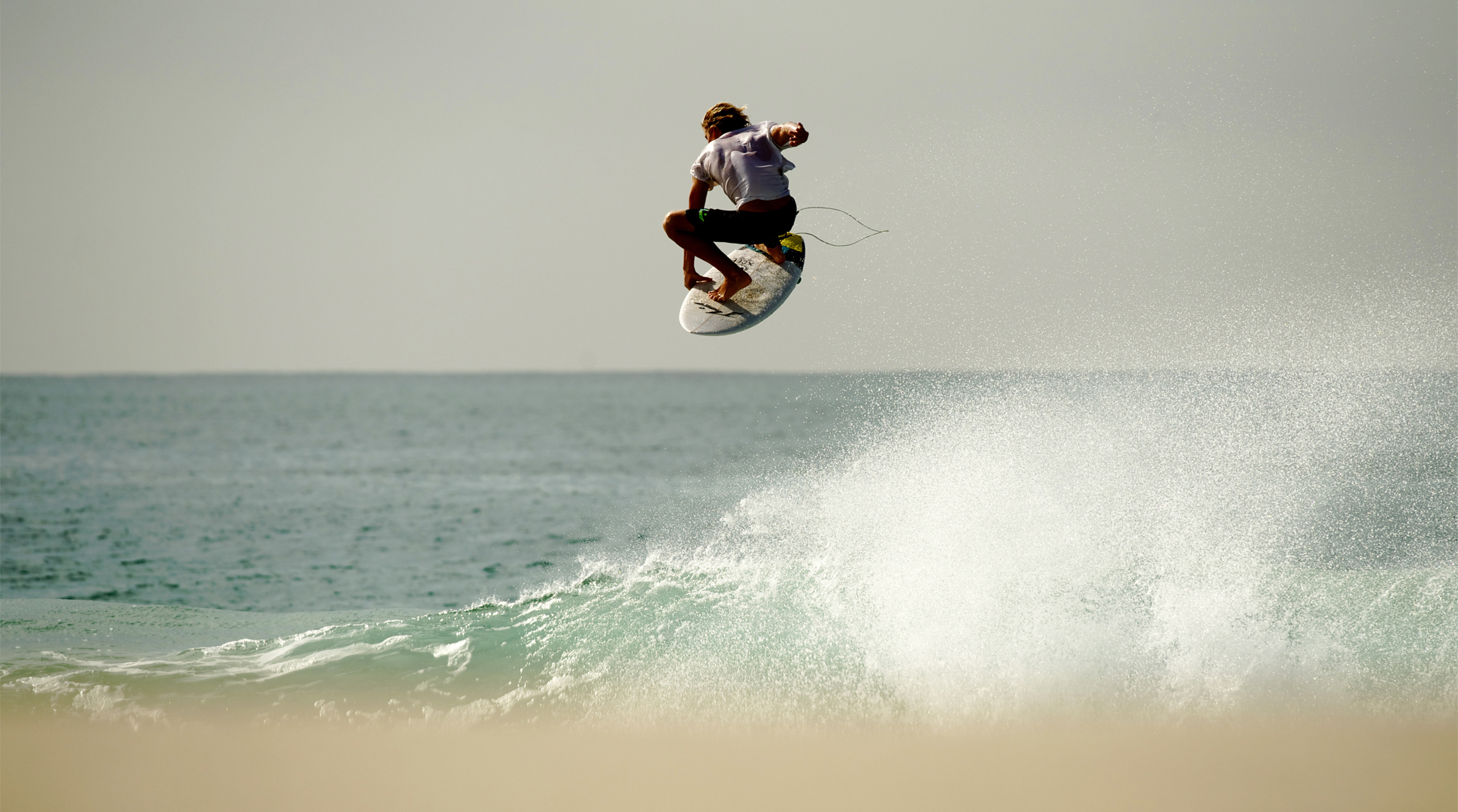 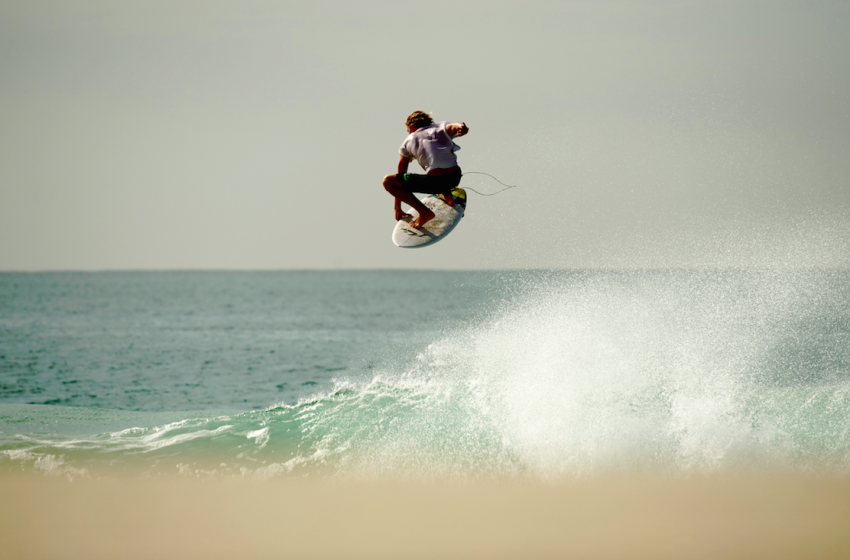 Hey, remember when Noa Deane said ‘fuck the WSL’ on stage live at the Surfer Poll in December? Remember when all that social media hate and critical surf media commentary spewed up at the 20 year old after that?

Remember when Cluster, the surf film of the year, premiered all over the world in early 2015 and Noa Deane took the final section, stomping his arrival as one of the world’s best surfers? Remember how Noa Deane stopped drinking for three months and went to all those raucous premieres sober? Such good memories! We gave Noa Deane a call so we could reminisce on all that together and he could explain what it’s like to all of a sudden be loved and hated and then loved again by surfers the world over. He was sick when we called him. He’d been sleeping all day and coughed up blood when he woke. What a guy! Cheers, Noa Deane.

MC: Alright, how has the first half of your 2015 been in comparison to the start of your 2014? It must have been a pretty strange beginning.

ND: Yeah, super weird. I felt like way more people were watching what I was doing for sure. Way more people, it’s gnarly.

Has that changed anything about who you are?

It makes me put more pressure on myself. Like, “Everyone’s watching, I better surf good.” Everyone’s gotten so competitive, too. Or they always have been but now people compare you to John John and stuff so you’ve got to really step shit up. That’s not a bad thing though, because he is amazing.

When did you find out you had the closing section of Cluster?

When I first watched it.

Kind of, because Kai (Neville) said something to me a couple of months earlier like, “You’ll probably get the last part because you’ve put in so much effort.” I thought, fuck, that would be nuts, but I still didn’t think I was actually going to get it. That’s crazy.

How many times have you been to Hawaii?

I’ve been to Hawaii about six times.

Are you self-conscious when you’re there? Are you watching yourself because… Hawaii?

Yeah. It’s the weirdest thing. You’re on your tippy-toes the whole time because you think someone is going to bash ya. And then you go out and do something like I did, and it’s like, yep, I’m going to get fucking killed.

So that night at the Surfer Poll: Strange Rumblings wins best film, you and the Globe team are up on stage and pretty loose, you make a comment on the mic, the room goes a little bit silent. Then what happens?

Yeah, it wasn’t a big deal. Heaps of people were coming up to me saying it was funny or that they loved it or whatever. And the next day no-one said anything about it. It was fine. The day after though, everyone started getting so eggy and then it brews up. Over there, someone does something and then it starts brewing until it boils over and you’re the worst person in the whole world. I don’t know why they got so uptight about it. I thought that, yeah, the dudes on tour are going to absolutely hate me, which I can understand because I pretty much said, “Fuck their set-up,” kind of thing. There was no disrespect intended towards them, which was really hard to get across once I said it. I couldn’t just go, “Oh I didn’t mean it against the surfers.” Everyone was still like, “Yeah fuck you.” But it’s so crazy how many people came out of the woodwork and commented on social media. I was like, “Is that motherfucker seriously commenting on this? Who the fuck’s he to say something like that?” Now I see them and they’re all super nice to me. It’s lame. If you write someone off then back your comment. Don’t jump on there, write someone off and then be mates with them in a month. That bums me out big time. Everyone was posting a photo of it going, “Oh these guys are so horrible, it’s such a shame to the sport, Noa Deane, is just horrible.” And then 20 other people would comment, “Yeah, that’s horrendous behaviour.”

What did you do once you realised that there was this swell of criticism and hate growing?

It was pretty gnarly. That next day I went surfing out front and it was about 80 foot and I was trying to do some airs. I could barely get out because it was so big.

Everyone was telling me, “Just letting you know, someone’s going to come around to bash you.” And I was like, “OK. Sweet. That sounds good. Cool.”

And then I’d see the odd person that would be stoked. I remember seeing Nathan Fletcher and he just nodded his head at me, when I was eating some food, and then walked away. He was kinda frothing… I think. Then I met up with a couple of local respected heavy dudes. They were saying stuff like, “Yeah, don’t worry about it. It will go away. Everyone has done shit around here that isn’t that good. Andy and those guys all did bad shit, it’s all about what you do with it now.”

Was that scary, going and meeting with the Hawaiian heavies?

Yeah, but they turned out to be the cruisiest people about it. They were like, “Give us a call if you get in shit because a bunch of young dudes will probably try and teach you some respect.” Because that’s the thing, slapping kooks, teaching respect, you know?

So you didn’t jet out of there, you hung around and kept surfing.

It’s sweet. But by the time I got home I could have punched a hole in the wall, I was so wired. I had thousands of thoughts running through my head. Kids writing to me saying, “This is the sickest, fuck everyone, fuck all these haters,” and then crew writing to me blowing up saying I was the worst, mums writing about me on Facebook, it was gnarly man. There must have been thousands and thousands of comments.

You’ve had a really quick rise, it’s only been the last three years that you’ve been getting properly noticed outside pro juniors and stuff. Now you’ve gotten the final part in Cluster and your comments on the WSL created a total shitstorm. Are you surprised at how much your comments reverberated and how famous you are?

I’ve struggled for the last six months to get my head around crew saying, “You’ve got to be a role model.” I’ve been like, “I’m not a role model, I’m just a kid. No-one cares what I do.” I’m realising now that maybe there are a few people who actually give a shit, which is hard to wrap your head around because then you’ve got to concentrate on your behaviour the whole time. To not be a shithead. It’s a really weird thing.

Do you regret it?

That’s a surprise. Why not?

I think it was a once in a lifetime experience that’s not going to happen to anyone else, it’s kind of cool in that way. That I went, did it, and then got blown up at by everyone. I’m not that bummed on it. I don’t see why it should bum people out that much. All the people whose opinions of me I care about don’t give a shit about it.

What about your sponsors? Were they quick to get in contact when it boiled over?

Yeah, all of them were pretty eggy. They weren’t super eggs but they weren’t frothing. It’s a bit of a stitch up when every photo they post of me for the next month will have people writing, “Fuck that guy!” or a kid saying, “Fuck the WSL” in the comments. Someone was saying to me the other day that it was like a bubble that had been waiting to pop with a statement like that. Kids have been spray-painting it on their boards and sending it to me. I’ve had like a hundred kids do it.

I think that a lot of those kids probably still watch the WSL, it’s just that they like you and they loved that something happened. Almost like it’s just something cool to yell.

I know, imagine how boring that whole thing would have been if nothing happened. I’m just getting over people saying to me things like, “You blew it, you won two awards, you could have won the other award and been the biggest legend.”

You’ve got to be so on your tippy toes all the time to be that dude.

So you’re saying that you’ve got to make mistakes.

Yeah, of course! Do it all the time. Every fucking day. Some are massive though. And some are small. I just ate a mint Cornetto and it was the shittest thing I’ve ever done, almost. Worse than the WSL incident. I’ve got the phlegmiest throat. I’m sick and I ate an ice cream. Idiot, huh? The biggest idiot.

Do you think you’ll go to Hawaii this December?

Yeah. I might get beat up, I might not. Hopefully the skatepark is done so I can go skating.

Are you drinking again?

Yeah. Just having a couple of beers. I don’t go as psycho anymore. I went out on Anzac Day and I came home at nine, which is unheard of for me. And then I was sweet to go to Straddie the next day except that was an absolute stitch-up anyway because it was so crowded.

Do you think this whole thing has made you grow up?

Nah! Yeah… Oh, I don’t think I’m ready to grow up. I’m only 20. But it has taught me a lot of things. You can’t really say what you want or else you get lit up and if you keep saying what you want all the time you’ll end up one of those weird fringe dudes that everyone hates. It’s just having an opinion, it’s a good thing, maybe keep it to yourself though.

Do you think there are people that still hate you?

And you don’t have to hang out and pretend to like each other.

Exactly. That’s the good thing about being hated.