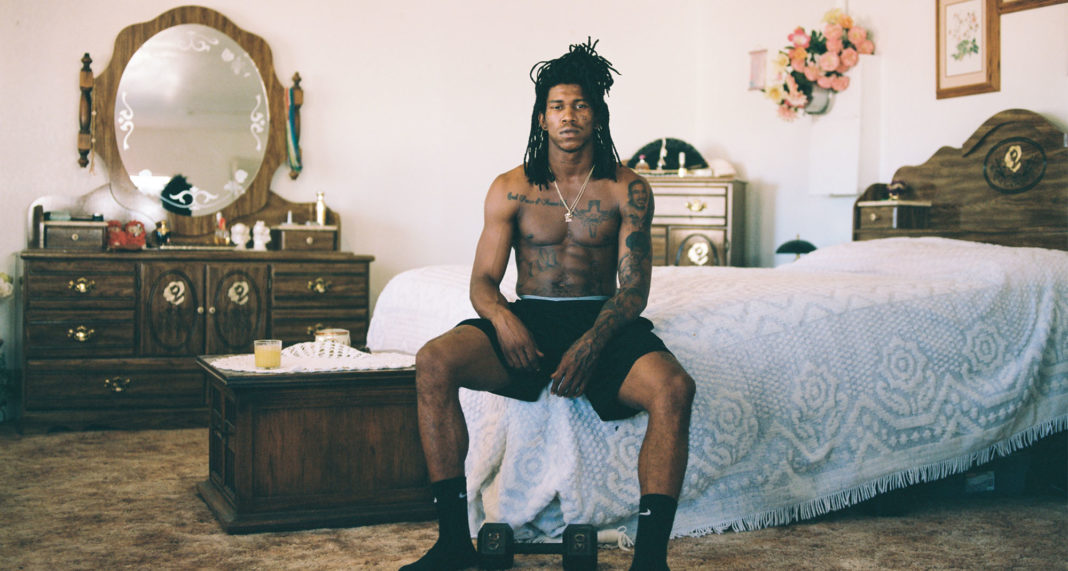 What do we leave behind when we die?

On a recent trip to a small desert town, LA photographer Nick Green came across a house filled with things and memories belonging to a recently deceased woman and decided to document what she left behind. The abandoned belongings—including a tiger shrine and some hidden knives—formed the basis for Nick’s photo series Grandma’s House, now on show at Mullumbimby’s Yeah Nice Gallery. We caught up with the talented lensman to find out more about getting kicked out of documentary class, blowing up a Mercedes and more.

Where did you grow up and do you think it affected who you are today?

I grew up in a small, blue-collar town called San Pedro. Opportunities felt pretty limited. The main jobs people strived for was dock work, fishing or construction. It’s a hard-working town. Everyone’s motto is, ‘Get your fucking ass up and get to work!’ Growing up there helped shape my work ethic and my drive to get out and do something different. 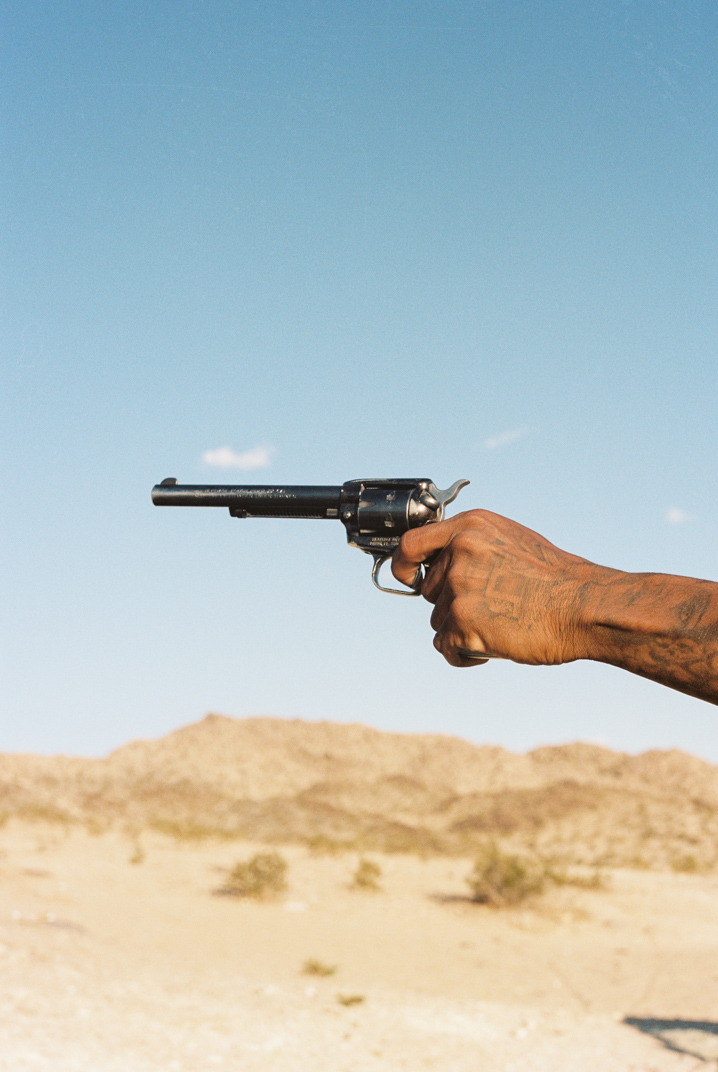 What was the first photo you remember being really proud of?

When I was 16, I had one of those Blackberry phones and I would take photos of everything. I remember one day I was riding the bus to Channel Street skatepark and saw this man passed out on one of the seats. He had his limbs all over the place. I’m not sure how he fell asleep in this position, but it was really something else. I immediately grabbed my phone to take his photo, but hesitated; I remember being so afraid to get caught. It was such a rush—capturing someone in a real moment. I wish I could look back at this photo. It was probably shit, but I think that was when I knew I loved photography. 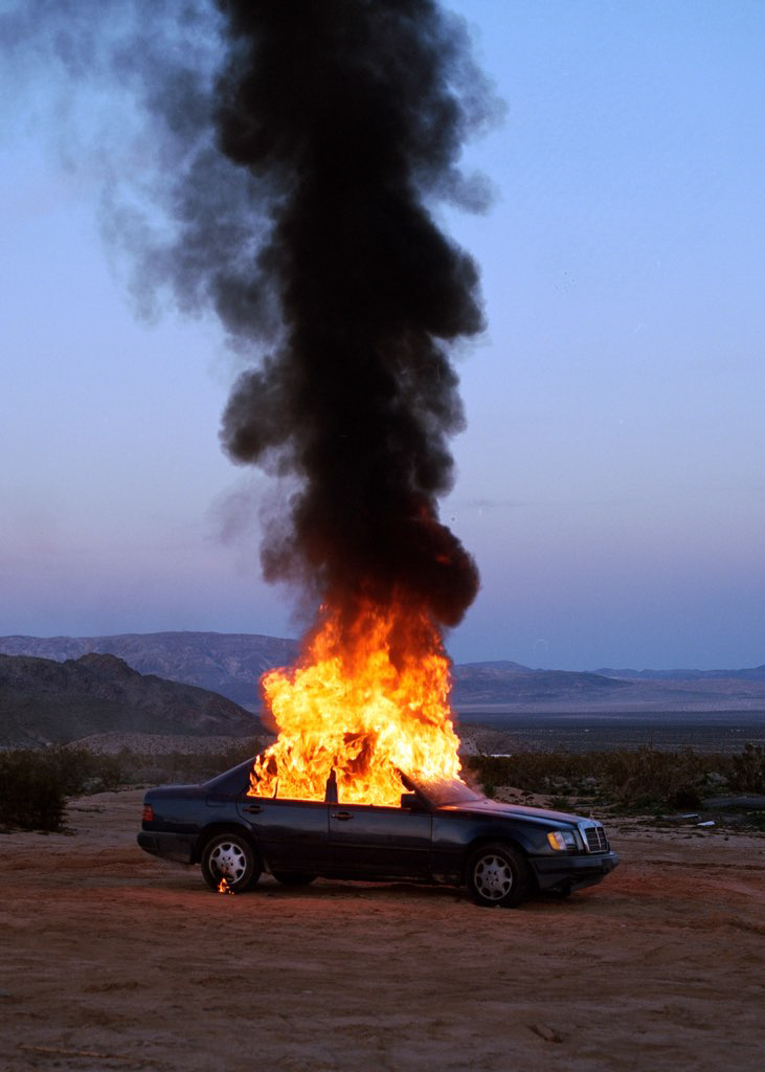 Can you tell us the story behind one of your favourite photographs in the show?

I’ve been spending a lot of time in the desert, just fucking around with friends and shooting. While I was shooting photos that would eventually become Grandma’s House, I saw this 1989 Mercedes e300 for sale. I call and bargain with this guy, and next thing you know, my buddy and I are towing the car back to his house. I bought the Mercedes for $130. The car was actually in pretty great condition for what it was. That didn’t matter that much, though, we were going to blow it up anyway. We got some gasoline, doused the entire inside of the car and set it on fire. The flames were so high that a bunch of neighbors came to check it out and eventually the fire department came to shut us down, but we were already putting the fire out. The whole thing was so laidback. The rules don’t really seem to apply out there in the desert. 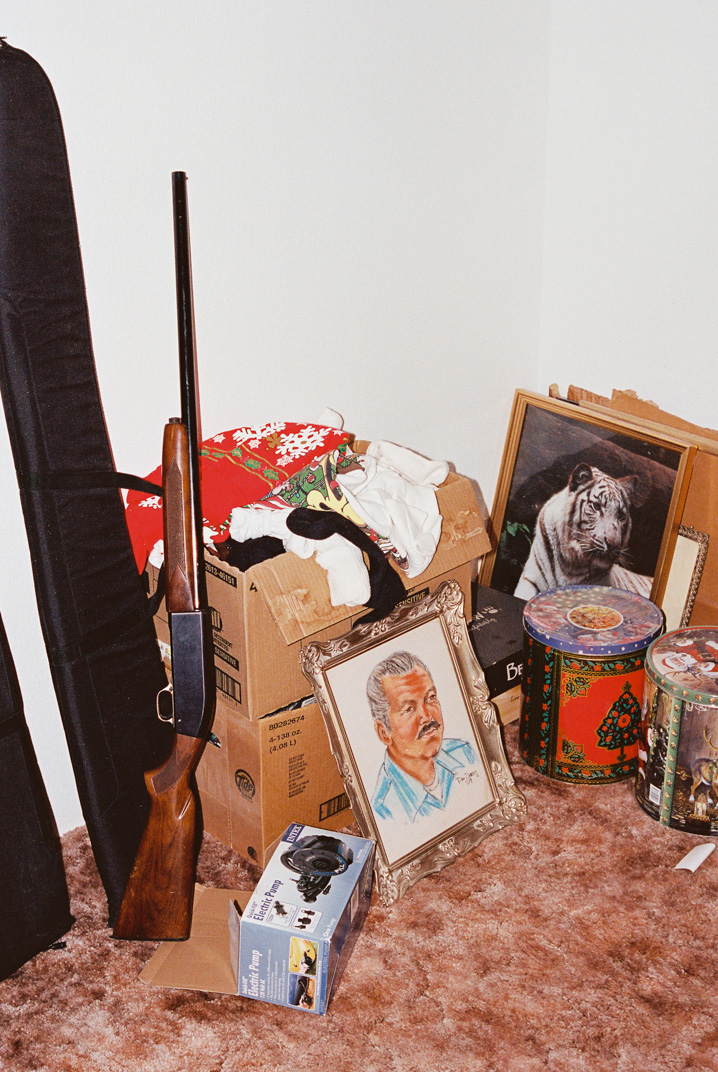 How did you select the images that makeup Grandma’s House?

At my recent show in Byron, I shared photos from this trip to the desert. My friend had bought this little house when an old woman passed away. Her family was supposed to collect her belongings but never did. When we first went to check it out, there were all these items from her life. The place looked lived in, almost like she was still there. It showed her personality. There were many framed tigers and some random knives hidden under her bed; the house had shag carpet throughout (even in the kitchen), and her bed was neatly made. I documented all of it, untouched. 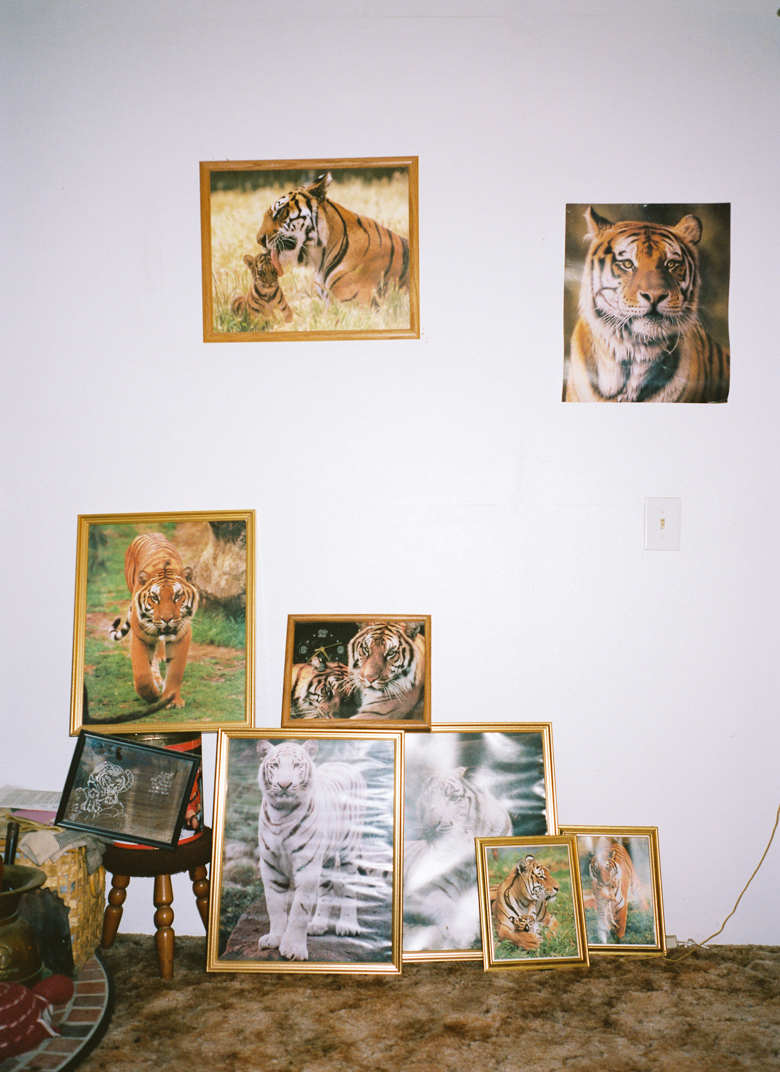 What’s with all the tiger pictures?

When we walked in the house, there was this wall covered in framed photos of tigers. Some were stacked and leaning against the wall and some were hanging. There was even a tiger clock. I think she really had a thing for tigers.

You also shoot a lot of really beautiful music videos. How did you get involved in filmmaking?

My very first involvement in filmmaking was in high school when I took a documentary class. At the time weed was still illegal. I decided to do my project on smokers and growers; I really wanted to show something people were actually interested in. When I showed the class the first cut, everyone loved it, but the teacher was outraged and kicked me out of the class. I never finished it, but being shut down for something I was interested in made me want to do it even more. I started making some of my own films and documenting people doing things I thought were cool, eventually turning it into a career. 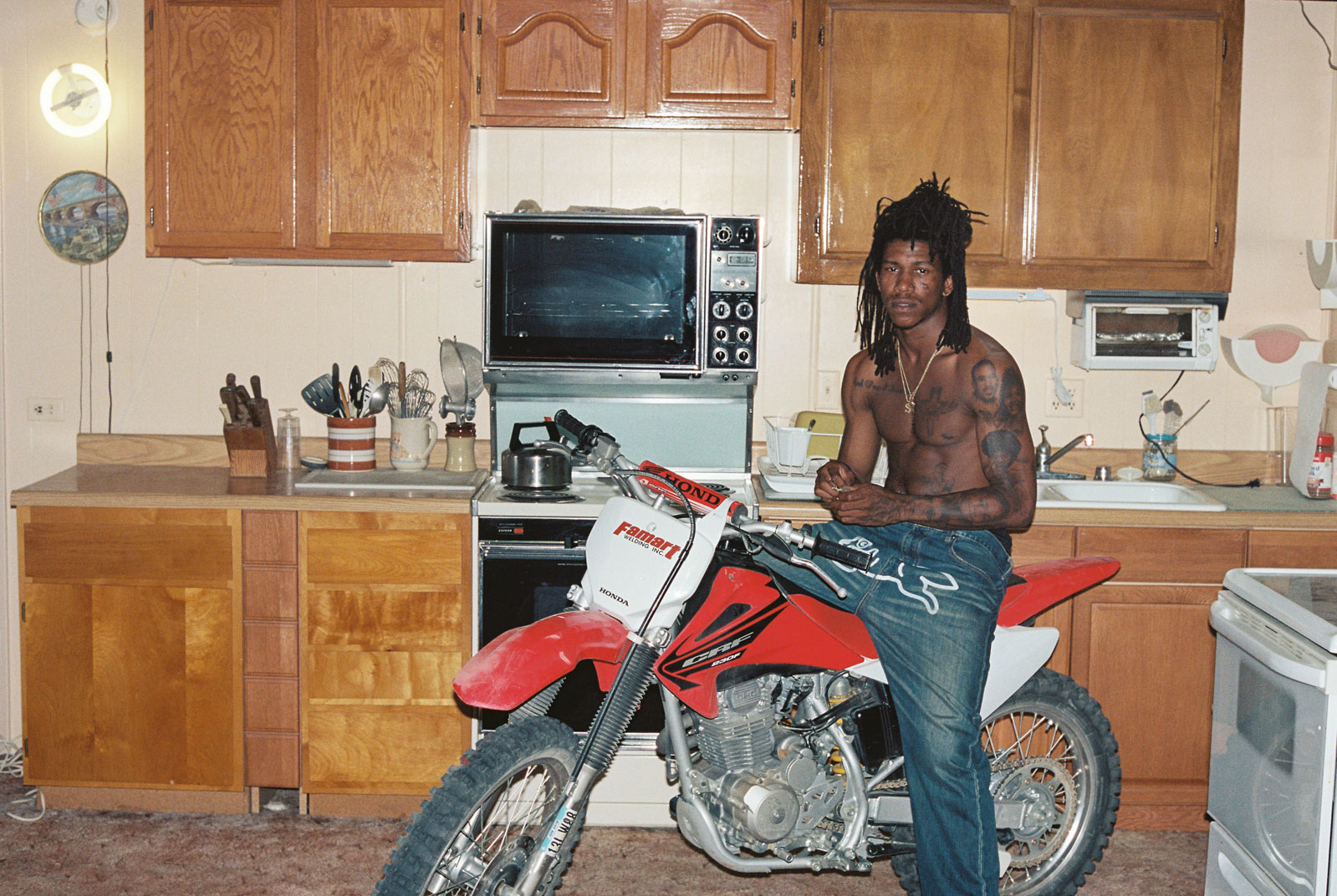 What’s been inspiring you lately?

Lately, I’ve been inspired by public transportation. Sitting in my car in LA traffic has become mundane. So, instead, I’ll take the metro to Downtown. Every stop has new life and ideas coming and going. We’re really all just trying to go somewhere.

Catch Grandma’s House until the 14th of April at Yeah Nice Gallery, 28 Mill Street, Mullumbimby, and see more from Nick on his website or Instagram @nickgrreen 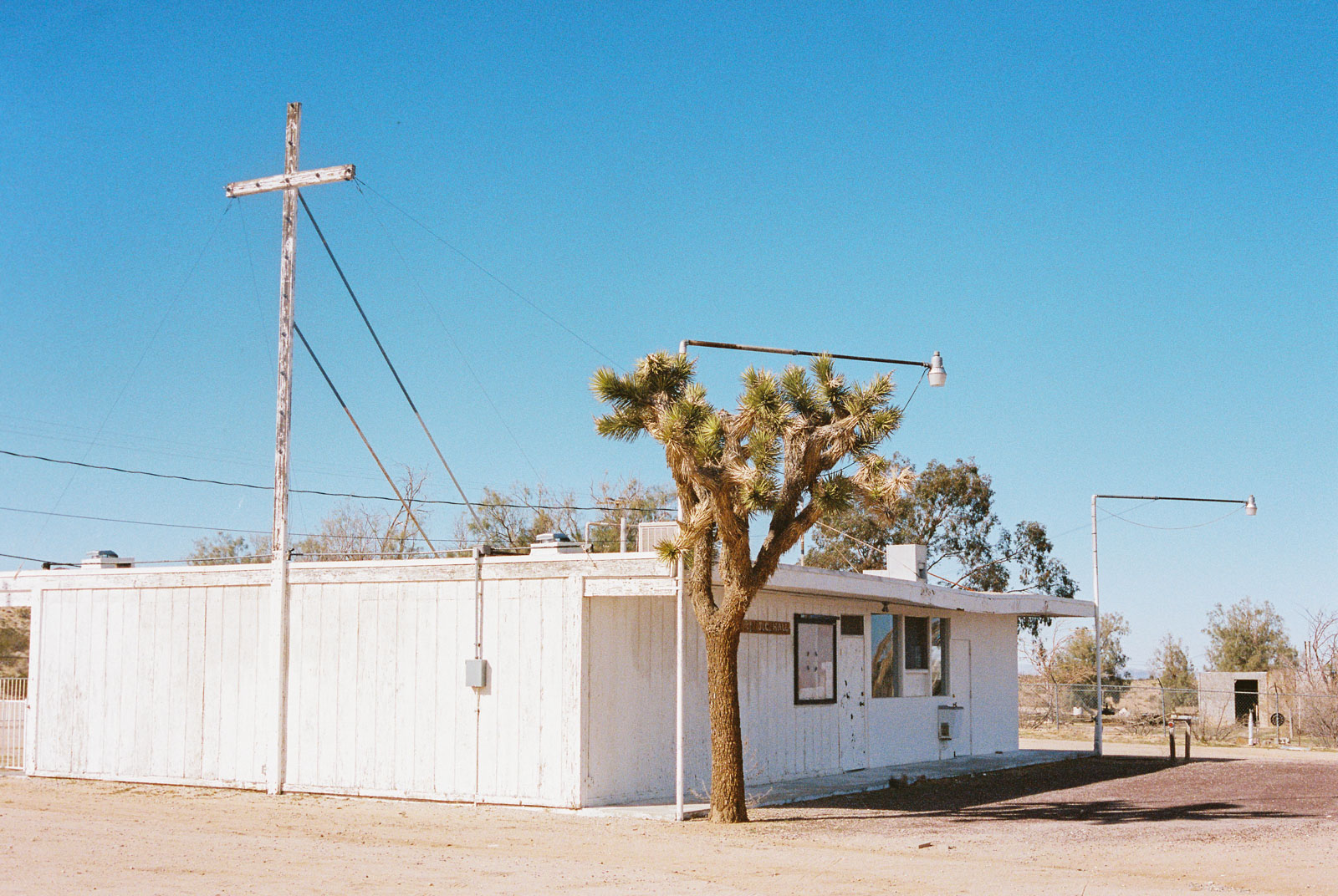