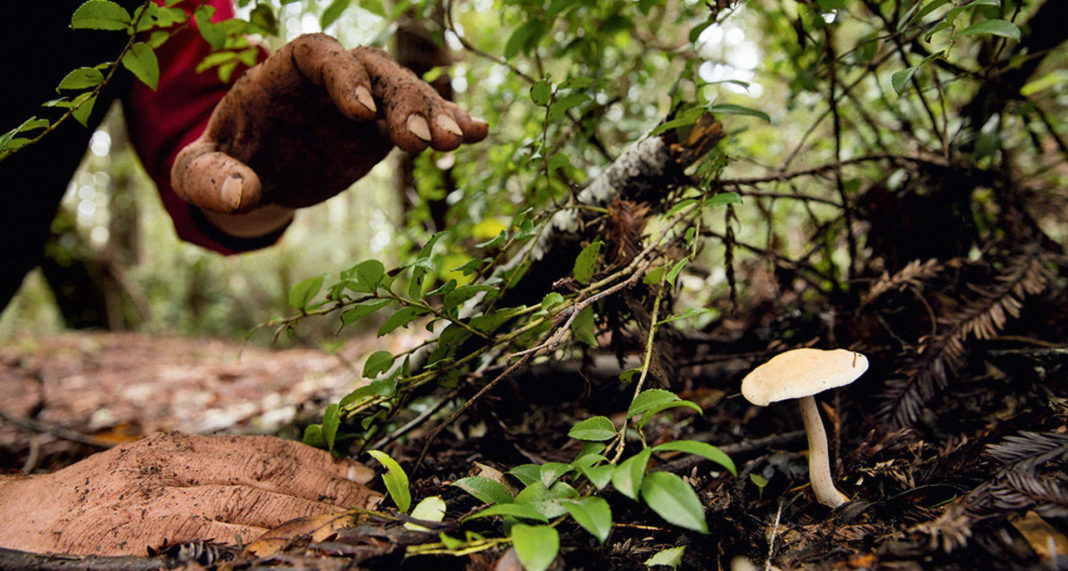 From making ragu to meeting interdimensional elves, mushrooms can be utilized in many ways.

However, because some mushrooms are poisonous, fungi hunting is easier said than done (and do not we recommend it). This is why the NSW emergency department saw fourteen cases of mushroom poisoning last month—a 25% increase over the previous year. So, if you plan on going hunting for some mushies, we thought we could at least arm you with a little knowledge so you don’t end up in the ER.

Typically, the best time to hunt for fungi in Australia is during the Autumn months, March, April, and May. However, given that we’re in a La Niña year here in Australia (a year where it rains an awful lot), and mushrooms thrive in these damp conditions, we may see fungi season stick around a little longer. Mushrooms will usually pop up a few days after rainfall, at temperatures roughly between 15 and 18 degrees celsius.

Australian mushrooms typically grow along the eastern side of Australia, from the top of Queensland down to the bottom of Tassie. You can find mushrooms in fields, farmlands, forests, and even backyards (though, for legal reasons, we don’t recommend you go scrounging around in strangers’ gardens.) Some types of mushrooms only grow in open fields, others only grow at the base of trees, and some grow out of cow dung. We’ll get to those ones…

Any aspiring mushroom forager should, at the very least, know how to identify a Death Cap mushroom. The death cap causes roughly 9 out of 10 fungi-related deaths in Australia, and by knowing what to look out for, you can remove any chance of consuming one.

Death caps typically arise in the autumn time around Canberra and parts of Victoria, and you’ll often (not always) find them near oak trees. Death caps have a cap diameter ranging from 4-17 cm with a white stem, white gills, and a green or yellow hue to their off-white cap. Research death caps thoroughly before even beginning your hunt, and if you or someone you know eats one of these mushrooms, call the Poisons Information Centre on 13 11 26 (They’re available 24/7).

There are at least 5,000 different species of mushrooms here in Australia, but to save you (and ourselves, mostly) the time of sifting through all of those species, there are three types of mushrooms commonly found in Australia with no toxic lookalikes.

Each of these mushrooms has a fairly distinct look, usually boasting a brownish to yellow-orange cap and yellow to orange gills. Slippery Jacks and Weeping Boletes can also be identified by their foamy-looking gills that more closely resemble a sponge than the gills you might be used to seeing from your store-bought mushrooms.

Each of these mushroom breeds grow near pine trees. So, if you’re looking to throw some freshly-caught mushies onto a pizza or in some pasta, it might be worth seeing if there are any pine plantations located near you and checking them out after a rainy week. Bring a small knife with you and cut the stem where it meets the ground when you’ve found one that you want to remove!

I’m sure that a good chunk of people reading this just want to take a trip to outer space and have a sit-down with some reptilians from another universe, and I can’t blame you.

Let’s start with Blue Meanies. Scientifically referred to as Panaeolus cyanescens, Blue Meanies are a smaller shroom with a cap size of roughly 1.5–4cm and a white stem. You can find these potent fuckers in grassland all along the Eastern coast of Australia after heavy rains in spring through summer, and you’ll also find them sprouting from cow dung.

Now, onto Gold Tops. Gold Tops can be found all throughout Australia, and are scientifically referred to as psilocybe subaeruginosa (rolls right off the tongue, doesn’t it?) Gold tops can be found from May through to August in Australia, with a yellow to orange-brown cap that’s 1.2-5cm in diameter.

Lastly, Liberty Caps. Referred to by nerds as Psilocybe semilanceata, Liberty Caps grow from August to November in Australia have a cap that grows up to 2.5 cm and can be found predominantly in cow dung in Victoria, New South Wales and South Australia. Liberty caps are some of the more potent magic mushrooms, so don’t say we didn’t warn you.

Pro tip: When trying to figure out if you’ve scored magic mushies, firstly squeeze the stem of the mushroom and see if it turns blue. If it does, it’s passed phase one of the test. From there, remove the cap of one mushroom and put it on a piece of paper, face down, overnight. During this time the mushroom cap should drop spores onto the paper, and if those spores are a dark purple, you, my friend, have got magic mushrooms

So there you have it, a quick primer on mushroom hunting. Now, we should reiterate, that if you aren’t sure about what you’re doing, you might be better off finding a paid mushroom foraging tour (these won’t help you to find magic mushies, though) so that you can avoid the risks involved with being a newbie mushroom forager.

Good luck, don’t do it, but if you have to—be SAFE!