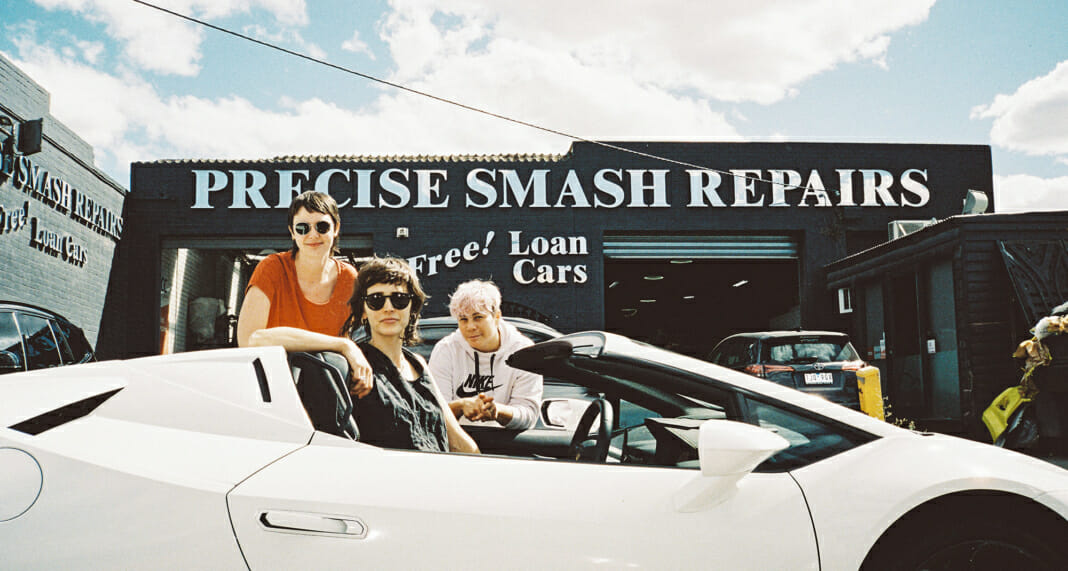 Erica Dunn is one of the best songwriters in Australia.

Her main project, Mod Con, has been compared to everything from Black Flag to The Birthday Party, a seeming torpedo of post-punk urgency that’s all too lacking in most contemporary music. She’s also got some serious rock music credentials: she plays in Tropical Fuck Storm alongside Gareth Liddiard and Fiona Kitschin, and her solo folk project Palm Springs is one of the most eloquent in Australia. But back to Mod Con. Ahead of their new album Modern Condition (out October 22 on Poison City Records), we caught up with Erica to chat about songwriting, the B-52s, and treading the line between simplicity and complexity.

With your new album Modern Condition, what’s the mode you’re working in? Like, there’s lots of anger and sarcasm—where does that all come from?

I think the main thing is we’re three old friends… the way Mod Con sounds is a reflection of the conversation between our three personalities. Without wanting to sound ridiculous and esoteric, by playing around with the bare elements of our playing and the sonic space that we each occupy, we end up with different sounds based on how we rearrange it. It comes out sometimes as like, pretty aggressive and stark, and that’s part of it. But there’s also a lot of lol’s and energy too. A lot of the sarcasm comes from that. We’re sufficiently comfortable that a lot of the lyrics are tongue-in-cheek or just jokes between each other. 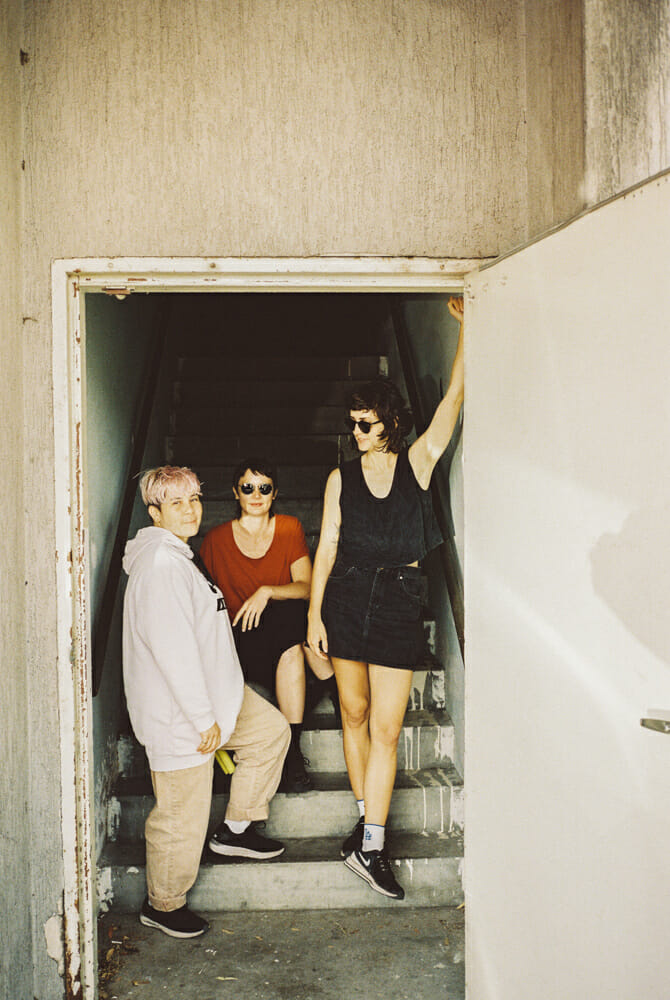 As far as the songs themselves go, what spurs any given set of lyrics? Is it contradictions you notice that you want to say something about?

It’s hard to describe, but they’re certainly constructed out of observations. Like, this album’s called Modern Condition and while the title is kinda tongue in cheek, it’s still like, ‘checkin’ the condition, the sign of the times, checkin’ out the status quo! Like, if you were checking an engine, you’re checking if it’s running ok, so it’s playing around with that. Checking in with the set of circumstances we find ourselves in, which happen to be completely bizarre.

And certainly, each song has its own bent. But there’s themes in common; scrutiny of relationships, a lot of the time I’m trying hats on and asking questions without necessarily answering them. I’m trying to do the flawed narrator thing—by exploring around an idea, something else becomes clear. But yeah, half of the album was written in lockdown, and it checks in a few of those dark zones. Like in ‘Ammo,’ the first lines are ‘morons and hard-ons, just time bombs ticking away.’ Just this frustration at the powers that be. And then ‘Learner In An Alpha’ is actually a climate change despair song, just a vehicle for screaming about it.

Mod Con songs seem to tap into this fucked Australian underbelly, is that intentional?

Yeah! I think it’s also just part of what happens when the three of us get in a room! It’s a real ruckus, the lyrics oftentimes come later. I might have a little bit of melody attached to part of a riff or something, but the lyrics seem to get matched to the music, y’know what I mean? Again, it sounds weird and esoteric but sometimes you catch a vibe from what’s happening in the actual playing as to what the song’s about. So, the intensity of that is something I have to match with the lyrics, and find out what we’re really on about. We did demos of a couple of songs where there’s no lyrics, I’m just yelling, but it still feels like what the song’s saying. So writing words is like filling in the gaps.

Oh, that’s a cute reference! Yeah! I mean bands like that are sort of in my genetic formula, just the building blocks of what I was listening to in my formative years. I love that stuff of the dual vocals that are like, in unison and then split away into a funny harmony. It’s magic. Tropical Fuck Storm actually played a show with B-52’s in Spain just before the whole world got cancelled and it was so sick. Katie Pierson is just such a lord.

If you sat down and just wrote what you were thinking, do you think it’d be good? Or do you think some insights are definitely more meaningful than others?

I think everyone needs an editor. I’ve been reading a lot of Clarice Lispector, she’s a Brazilian writer, and just your archetypal stream of consciousness thing. And it just takes this extra amount of effort to read, every sentence is like, ‘what the fuck are you talking about!?’ Like, she’s all about trying to capture the instant of writing, but I dunno. If I really get writer’s block, I’ll chuck the format of a song aside—a song is such a specific bit of Tetris, like, you’ve got your phrases where it’s down to the syllable, and sometimes you’re like, ‘how the fuck do I explain what I want to say in these syllables?’ or whatever. So if I get into a real spot I’ll try to write as long and detailed about a certain subject, and sometimes that helps, but I do not know if that’d actually be a good song in a large extrapolated form. I feel like part of the magic of a song is distilling away and filtering away, kinda capturing the essence of something. With Mod Con we’re about paring back, choosing essential phrases. Someone called us ‘efficient’. Our drummer Raquel’s really good with that, if she feels like we’re getting a bit indulgent, she’s got a punk ethic that’s like ‘shut up and say it.’

Do you reckon playing with Gareth has rubbed off on you?

A hundred per cent. The mentality of both Gaz and Fi has rubbed off on me,  they’re both people who have been musicians and nothing else for a long time, and they’ve made that life work for them. That’s something that I’ve taken in as a benchmark, I’m like, ‘fuck yeah, if you put the effort in and you just commit, and you just keep working hard, you can keep going,’ you know? That’s been a huge influence. But also his playing, I mean fucken oath, I think about playing guitar as a kid… then I think about when I look over at Gaz onstage or whatever. And even though I’m like, ‘that fucken guy is so drunk’ or whatever, he is still playing like a MADMAN! And it’s incredibly inspiring, he raises the level. I’ll never be able to shred for days like that, but just seeing him set that benchmark is pretty fun.

Listen to Modern Condition here on Spotify, or wherever you stream your music.