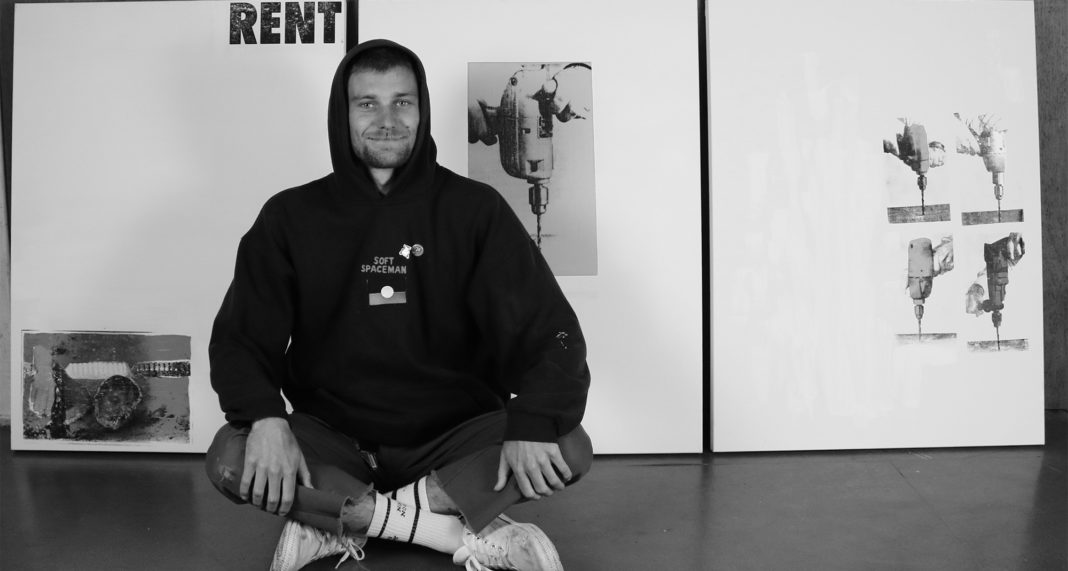 When I arrive at Jacob Boylan’s house in Suffolk Park, he’s sitting at a table out the front, sipping a tinny of XXXX Gold, watching a rugby league game on his laptop.

He’s got a Rodney Rude t-shirt on and a stubby cooler wrapped around his beer. He lives in a brick bungalow right near the beach, just south of Byron Bay, with his girlfriend and a few mates. There are about eight surfboards laying in a pile next to the fence.

It’s a Sunday arvo and Jacob has spent the weekend playing gigs with Mini Skirt, a four-piece garage punk band who arrived on the scene a bit over a year ago with a track called ‘Dying Majority’. The song takes a clever and incisive look at some of the paradoxes of Australian culture. On stage, Jacob is hyperactive and wild-eyed, thrashing his head around and yelling his lyrics with conviction. But this arvo he’s relaxed, winding down from a tour with Skeggs. He says last night’s gig in Brisbane was one of the biggest crowds they’ve played to, and it’s probably the last time they’ll play that set before getting into the studio and recording some new material.

While Jacob is best known as the singer of Mini Skirt, he’s also a visual artist in his own right, with a solo show called Butcher’s Hook coming up at Goodspace in Sydney on August 28. The show will set out to ‘assess, celebrate and critique the Australia he experiences today’, which is a theme Jacob has been exploring for a while now.

‘I see the band as an extension of what I do with visual art,’ Jacob tells me as we move to his garage, where he’s got a makeshift screen-printing studio set up. ‘Writing lyrics is a more direct version of what I’m trying to say with pictures.’ 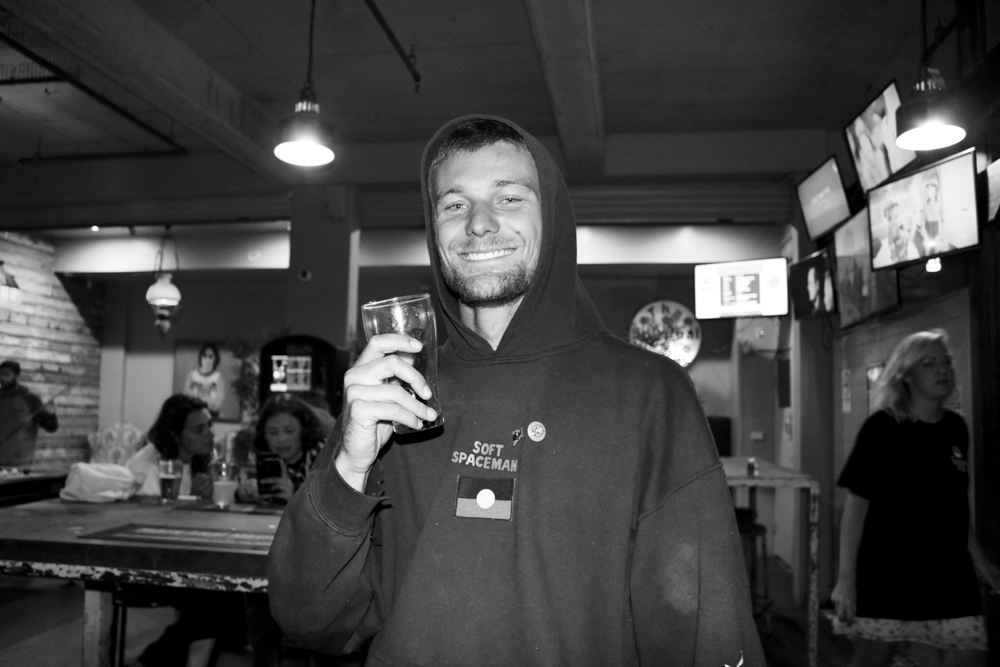 Visually, I can immediately see the parallels between Jacob’s art and music. His works are an amalgamation of screen-prints, image transfers and collage. Most of the imagery has been stolen from old Australian books and magazines with titles like, ‘The Pictorial History of Cricket’, or ‘Bowls, The Australian Way’. Sporting imagery appears alongside old school ads for tools or house paint. In his last solo show, at Yeah, Nice Gallery in Mullumbimby, he incorporated lengths of green and gold striped electrical tape, which is typically used in footy to keep your socks up.

It all points back to his interest and confusion about the Australian identity. Jacob explains that his art is partly about, ‘being a white Australian and trying to understand where you belong and where you sit because we’ve kind of displaced ourselves. Not in a woe-is-us way or anything but it’s just like, “Who the fuck are we?“‘

‘We’re just an amalgamation of so much other weird stuff in this land that’s not ours,’ he continues. ‘I think that when we are proud, it comes out pretty disgustingly. The people who are really proud, it’s not nice, it’s for no reason, they’re just proud. And it’s like, [proud] of what though? And I think a lot of it is this mass feeling of guilt.’

Jacob’s art practice generally starts with searching through reference images in the form of the old books and magazines from the ‘70s and ‘’80s about footy or lawn bowls or cricket. He routinely finds these books at op shops because nobody seems to have any use for them anymore.

‘I think it’s so hilarious that we have all these ridiculous books,’ he says. ‘I love them because they’re this cultural portal. I think it’s a big insight into our culture in general. They’re like relics.’ 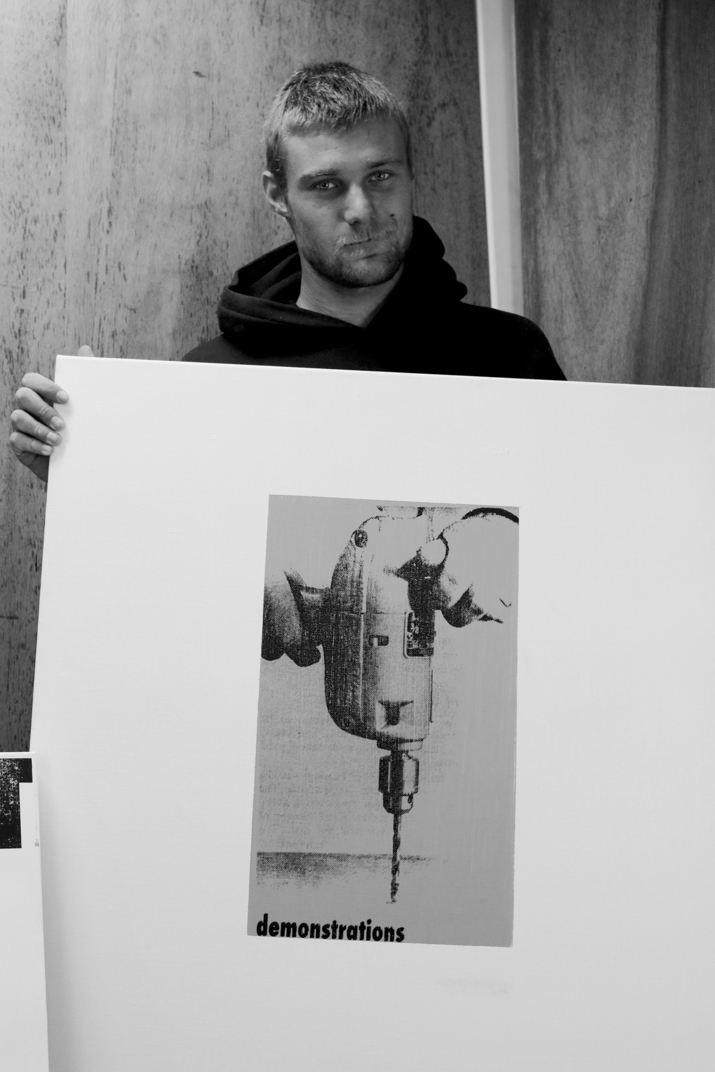 Sport is a theme that comes up again and again in Jacob’s work, but it’s a theme that is often considered incompatible with the fine art world. As Jacob puts it, ‘Artists hate sport.’ He grew up in Cronulla playing footy and still follows the NRL pretty closely, but he’s admittedly conflicted about it.

‘I grew up playing footy and then by the time I left Cronulla I absolutely hated it, because it was like, for jocks. Then I moved up here and no one watched the footy and I missed it. My thing of being at home was going down to the RSL and watching the Sharks play.’ He adds, ‘It’s just nice being weirdly passionate and weirdly patriotic about something that means nothing at all.’

Jacob’s own personal conflict about footy is partly reflective of a national divide between art and sport. ‘We’re like, “Australia’s such a sporting nation”. It’s so much a part of our identity in this weird way, which I hate and love at the same time,’ he says. ‘For the most part, art and music are entertainment. And sport is really just entertainment for people to watch. I don’t see them as two massively different things.’

In his art practice, Jacob abides by one firm parameter: he never Googles an image that he wants and then prints it out. For him, a large part of the process is scanning these largely forgotten archives and digging for the clues hiding in plain sight. Taking an image off the internet would be cheating his own methodology, so instead, he spends his time poring over old books and piecing the images together. ‘It’s like recycling, but with pictures,’ he says. ‘Instead of [creating] more picture pollution.’ 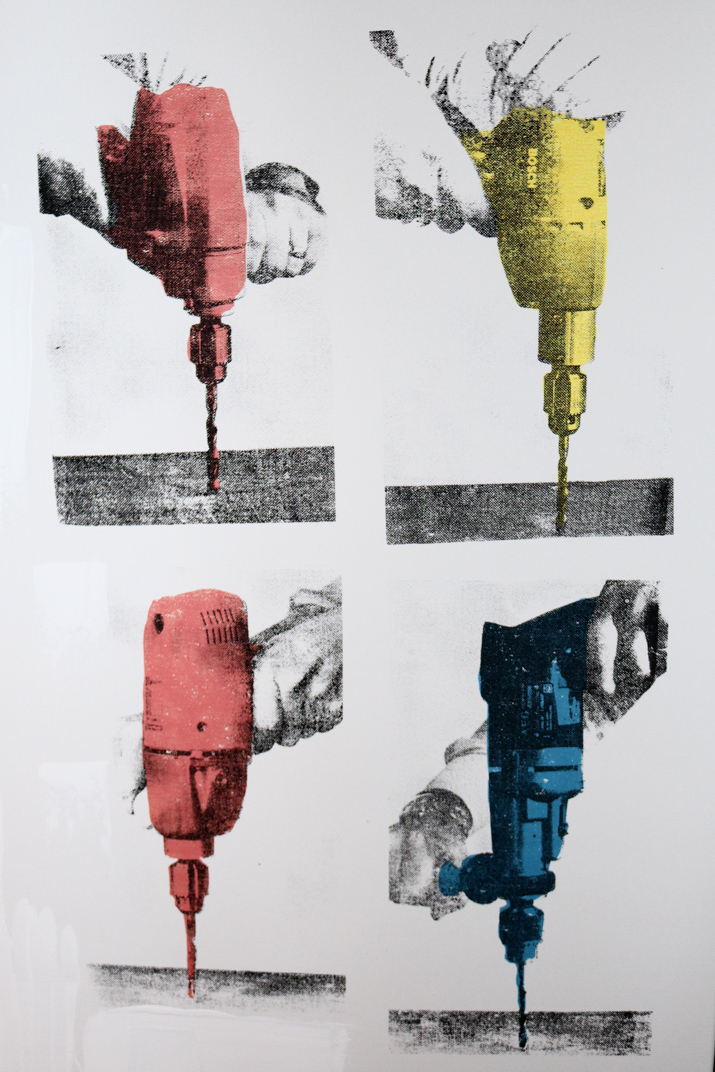 Recently, Jacob bought some second-hand screen-printing gear from a guy in Brunswick Heads named Johnny who had done some commercial screen printing work for a real estate agency. The bold type of ‘SOLD’ and ‘FOR RENT’ were still on the screens, so Jacob reused them and incorporated them into his work. Looking at these bold real estate words immediately sends your thoughts towards housing unaffordability and the intergenerational housing crisis that seems to be on the tip of everyone’s tongue here in Australia. ‘You kind of piece it together as the things come to you,’ he says. ‘I think going through this old stuff as reference material is kind of like, “Has this got something to do with who we are?”‘

And then there are the Aboriginal art books. They sit on Jacob’s bookshelf along with the others, but so far Jacob hasn’t been able to bring himself to repurpose them as reference material in his work. ‘See, this is part of the guilt that I’m talking about,’ he explains, ‘There’s these two really nice Indigenous ones and I can’t cut ‘em up or touch ‘em because I feel like it’s disrespectful.

‘And the book’s probably just made by some white person anyway. I don’t know, I feel weird,’ he says. ‘I can’t even scan them in.’

Maybe there’s an epiphany embedded in here about the conflict of our collective national identity. Or maybe there are no simple answers when it comes to national identity. Either way, it’s obviously a subject that is still compelling to Jacob. ‘It’s actually been amazing how long now I’ve been able to make works about [Australian identity],’ says Jacob. ‘Because I think it’s a problem that is very much ongoing.’

Butcher’s Hook is a one-night-only show at Goodspace in Sydney on August 28. 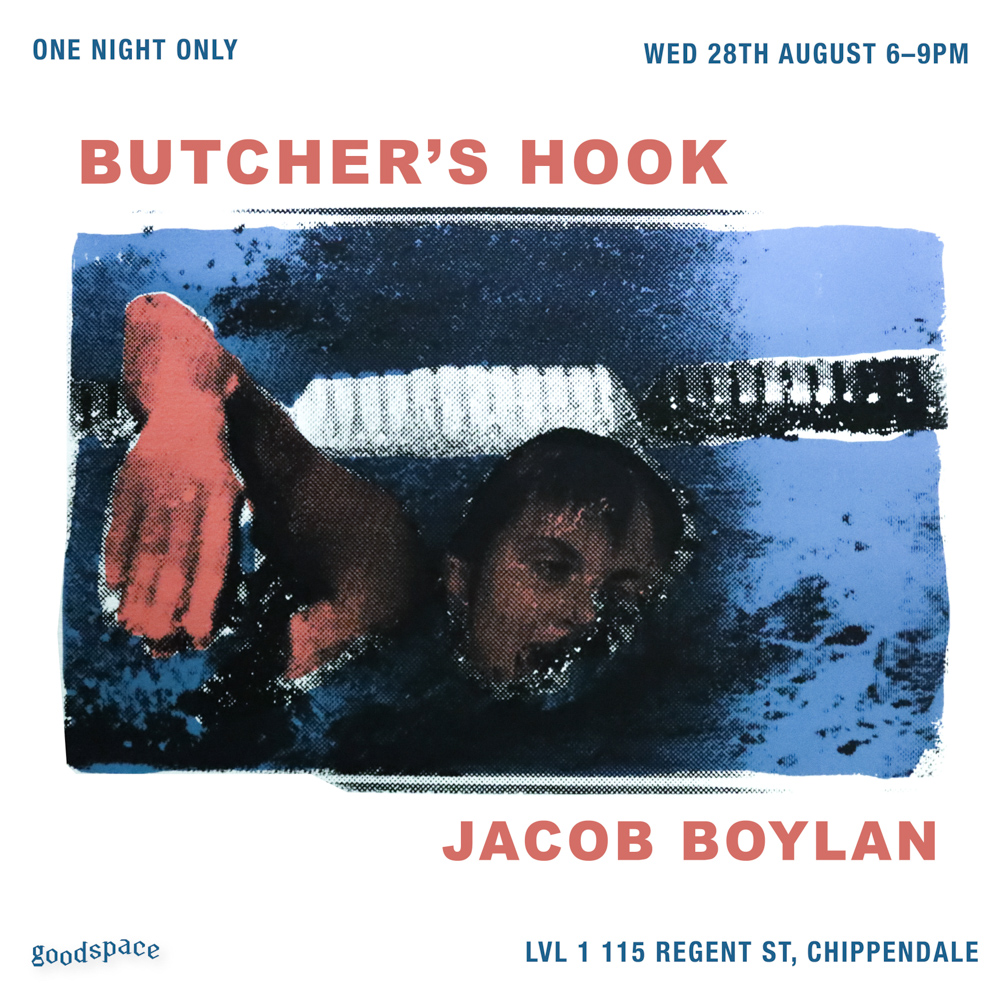