As I’m speaking to Miles Silvas, my head keeps thinking of Miles Davis.

My brain is a bit scrambled, as I’ve watched a recent video with Silvas, titled One Stop, several times where he skates through Koreatown in Los Angeles to a jazz soundtrack. The adidas Skateboarding produced video is a departure for both the brand and Silvas, as it offers a new feel and format. Silvas is an extremely gifted skateboarder, known for skating big obstacles, but in One Stop, he’s captured on the streets, throwing down difficult tricks at a casual clip. He doesn’t fall for the duration of the clip, uniquely filmed in a single shot, sans cuts, a rarity in skateboarding.

No one really skateboards around Los Angeles. Even the spots featured in the video are just that: Locations to arrive at and generally stay at until kicked out. This makes any footage of someone actually traversing the streets interesting, as it’s completely counterintuitive. The sparse footage throughout the video era of skateboarding where people are filmed skateboarding around Los Angeles is iconic for this reason. The gold standard being the “Amazing Rubber Boys” section of Powell Peralta’s Public Domain, which features a group of young men, presumably friends, skating through the city streets set to an anthemic McRad song. Later you had the next wave of Powell riders, and perhaps the most iconic example of Mark Gonzales’ section in Video Days, much of which is filmed in Los Angeles, as he scatters about to John Coltrane’s “Traneing In,” a stylistic first in skateboarding soundtracks.

Silvas’ 5-minute line is neither. In fact, it’s a sombre interlude, seemingly extracted from some day-in-the-life that we’re never privy to. Knowing the format and structure, it’s very much a social experiment, where he’s thrown into a situation and we watch the results. The 22-year-old Sacramento native riffs on unfamiliar territory, as Eric Dolphy’s “First Bass Line,” plods in the background. It’s a scene from Heat, meant to build tension, before the next burst.

We chatted to Miles Silvas about One Stop and what 2018 holds. 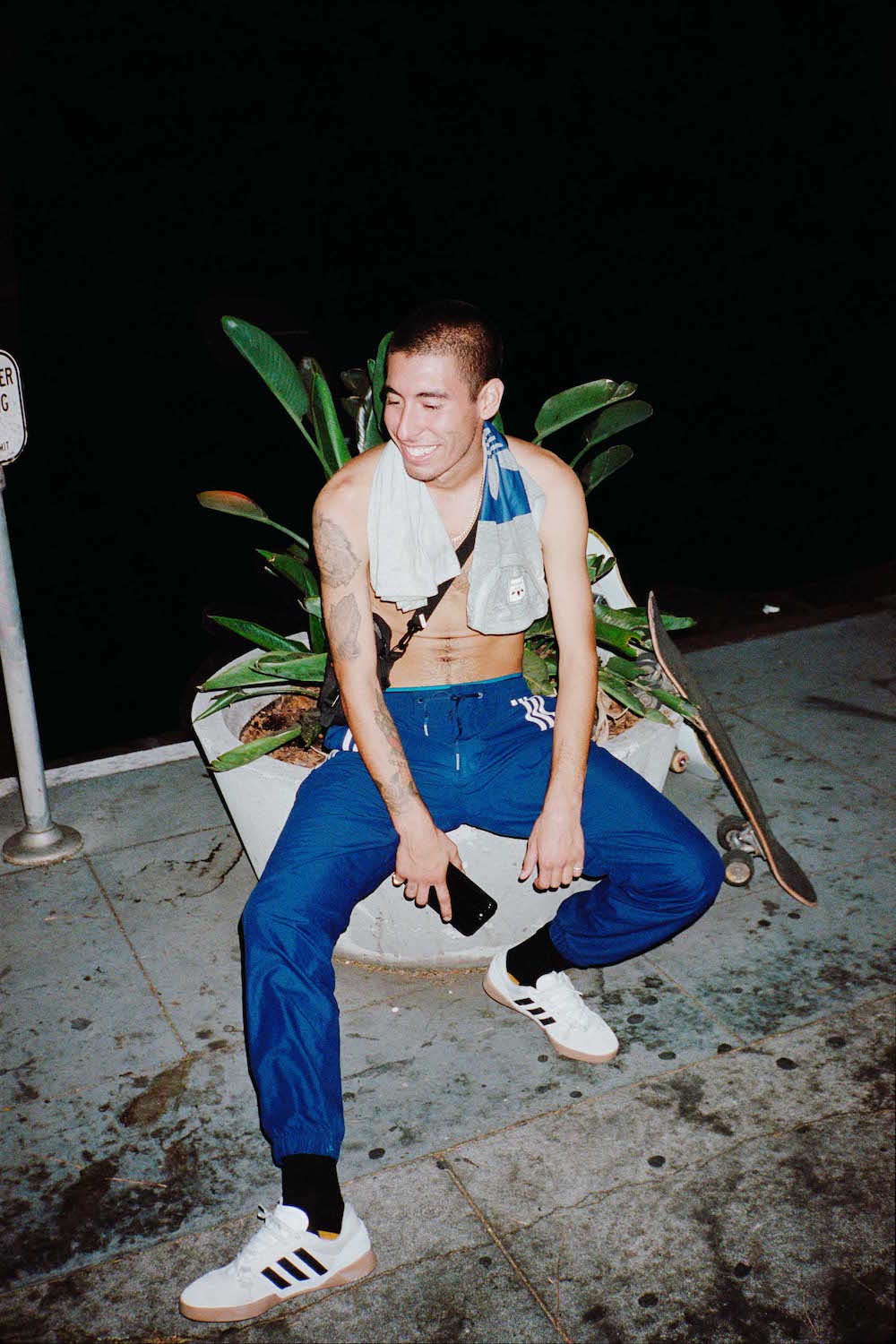 How’d you end up linking up with Numbers?

After Organika ended I didn’t really ride for anyone for about a year. There was some talk, but things were kind of quiet until Eric Koston called me up and mentioned he’d been keeping up with me and my videos. That was kind of crazy. I didn’t have anything going on and it just seemed like the right thing to do. I ended up meeting with him and Guy (Mariano) and it just worked out.

Had you even met them at this point?

I met Koston super briefly at the Berrics, but besides that, it was the first time I really sat down and had a conversation with him—he’s a pretty big dude in skateboarding.

You’ve mentioned that Rodrigo TX has been a big influence on you.

I traveled a lot with him and we shared so many sponsors over the years—been on a bunch of LRG and Official Hats trips, so when it came up with Numbers, I threw his name out there and it ended up working on.

Knowing that there was a lot of concept behind One Stop, how’d they approach you with the idea?

They had the idea and I had been talking to them about new shoes coming out. They were a bit nervous, because it was a big task taking on a big line like that, but I was down for the challenge. It was as simple as skating down the block; they had the locations in time, and then we mapped it all out. 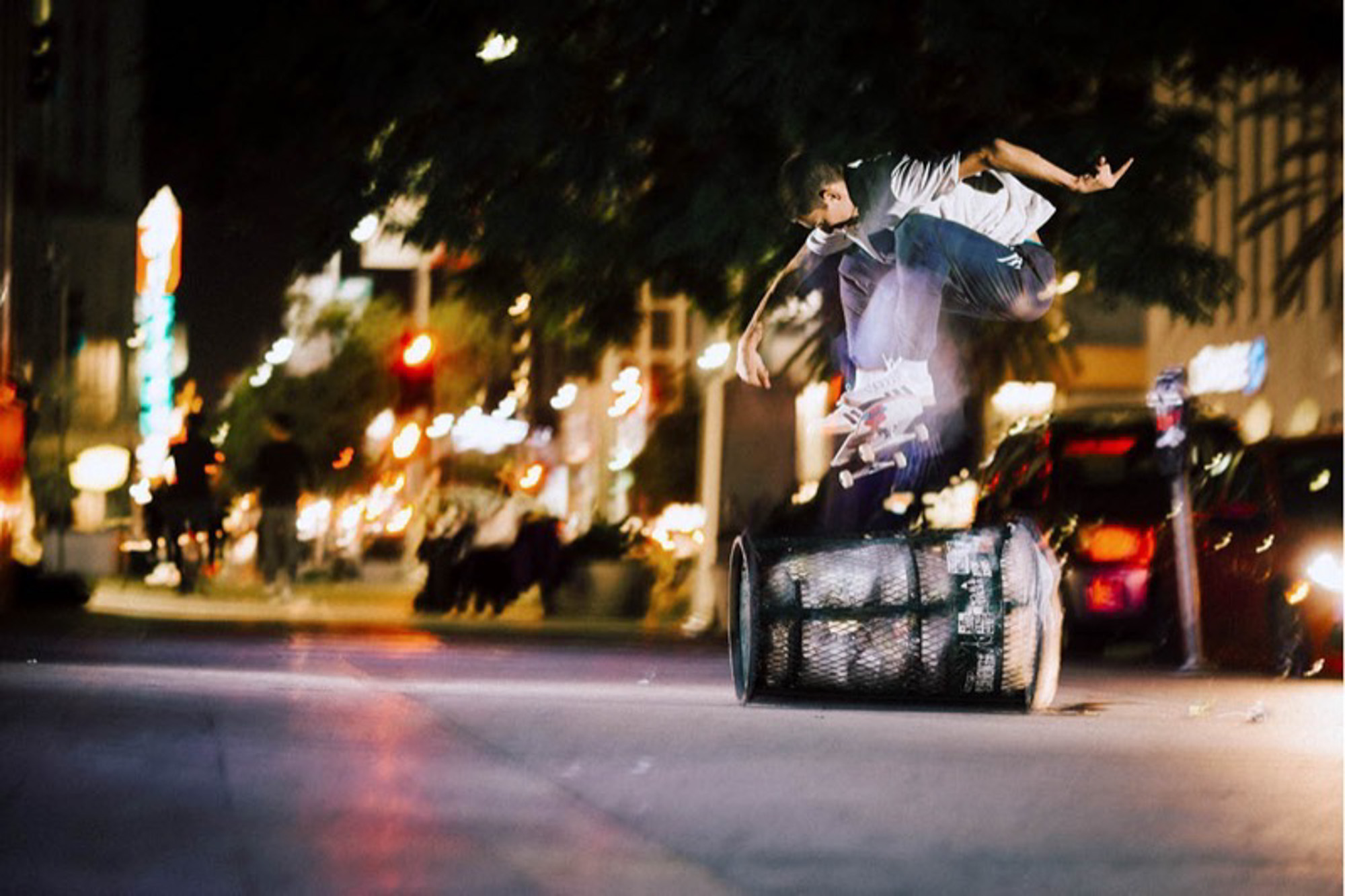 Was it tricky, not only going from spot to spot, but locations that are so infamous in skateboarding? You have to not only string tricks together, but be original at the same time, so as not to step on toes.

I had three camera guys filming me, so it was really calculated and planned. We did a few run throughs, so the camera guys could know where to be and get the right angles based on what I was trying. I ended up switching up the line a few times. In the beginning, I wanted to the craziest stuff, but as you’re trying to do it, you start to have people getting in the way, making it harder to do your tricks. I had definitely mapped out what I wanted to do though. It ended up being pretty fun.

Maybe unintentional, but I like how there are little nods to things throughout the part, like when you walk down the stairs and go to the front of JKwon—it reminded me of Dill in Photosynthesis. Then you’re going to this iconic gap-to-ledge where Guy had that switch back tail shove-it and Gino Iannucci went the other way doing a back tail. Was your switch back tail an homage?

That was just a trick I was feeling. I had actually never skated there before, but I knew I wanted to do something relatively good on that, even though it was going to be the end of this long line, knowing I’d be pretty cooked by the time I got there. Switch back tail seemed like the right trick for me to do. I’m psyched that it worked out.

In the same way that the Numbers edits have really shown the team actually out and skating around, I think the clip captures that. It makes you think of the history of those spots. Are there any landmarks you want to try to get a trick at?

There’s definitely spots in mind—OG spots that have a lot of history—where I specifically want to do something. Most of the time I just have ideas for spots, whether they’re iconic or not. There are some I keep on the list though that I want to do. I skated Wallenberg a little while ago and got really close on something, so I’m going to go back and try to do it. That’s one that’s in the back of my head. 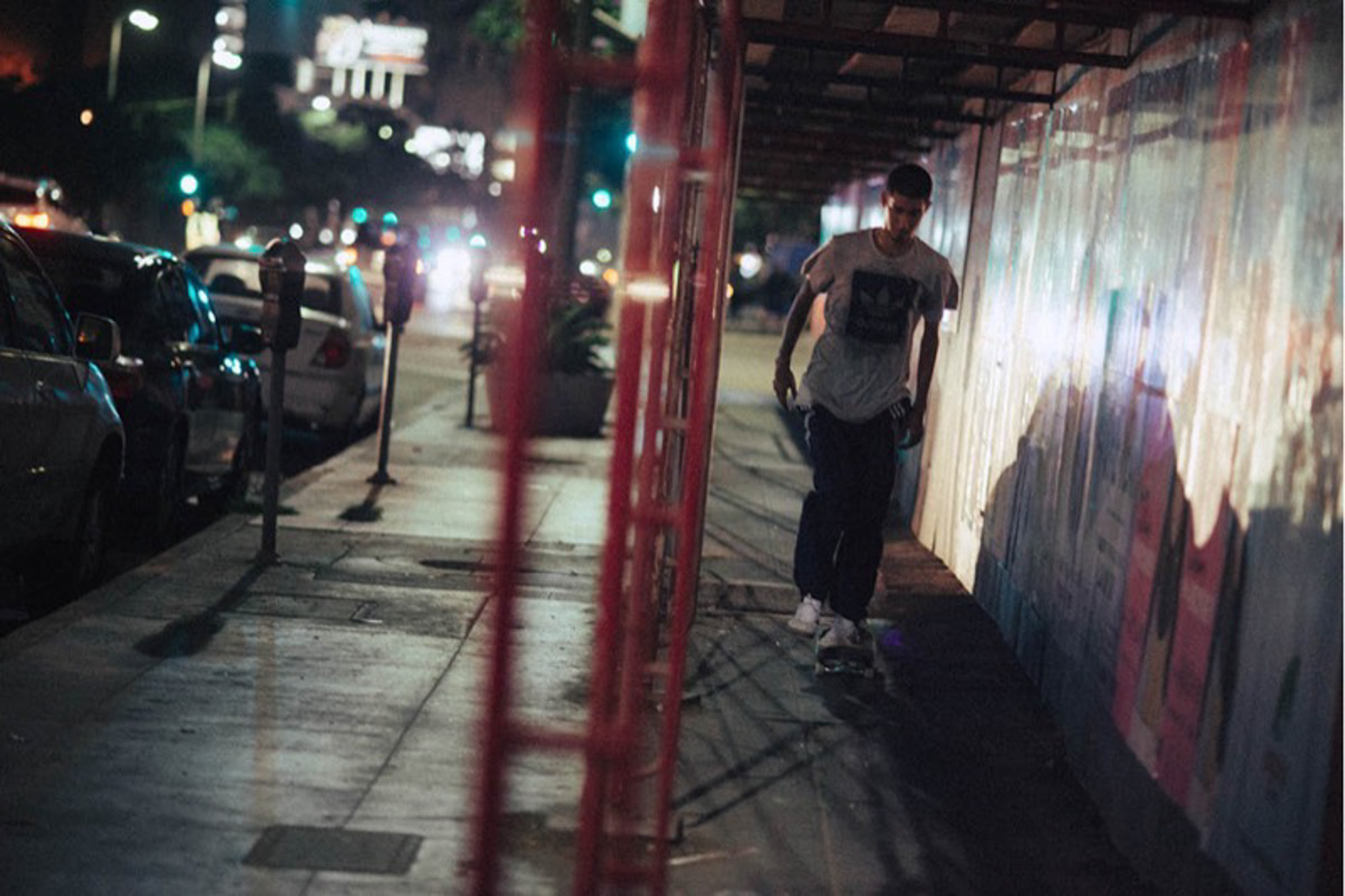 What was the hardest part of the line?

The hardest part of the line was just doing it and making sure people weren’t in my way. A lot of times I’d get to the end a bum would be posted up near the trashcan or someone would be sitting on the ledge at JKwon. I’d be like, ‘Fuck, I have to skate all the way back and start again. We had to film super late at night—you’re trying not to hit little rocks… there’s always something. It started getting tedious, but when it worked out it was sick. It took a few days though. The first night we just went and mapped it out, the second night I tried a different line with totally different tricks—I think I tried that one for two nights. I switched it up and ended up getting one I was happy with on the fourth night.

The launch of the new adidas Skateboarding City Cup shoe is tied into the video, as they both juxtapose heritage and modernity. How was it switching to the City Cup for such a different type of video?

I was excited to skate it when I first saw it a few months ago. For the edit, I had to skate it right out of the box. It took no time to break in. It felt skateable immediately. It has really good board feel but at the same time is pretty padded.

What can we look out for next?

I’m working on a Transworld part—it’s a ‘duets’ concept, so I’m sharing a part with my homie from Sacramento, Michael Pulizzi. Then we’re going to start working on a Numbers full-length, we’re already planning trips.

Before I go, I noticed you have a little madness thing going on with your chain.

[Laughs] Yeah, my gold chain—my shit has to be in the right place. 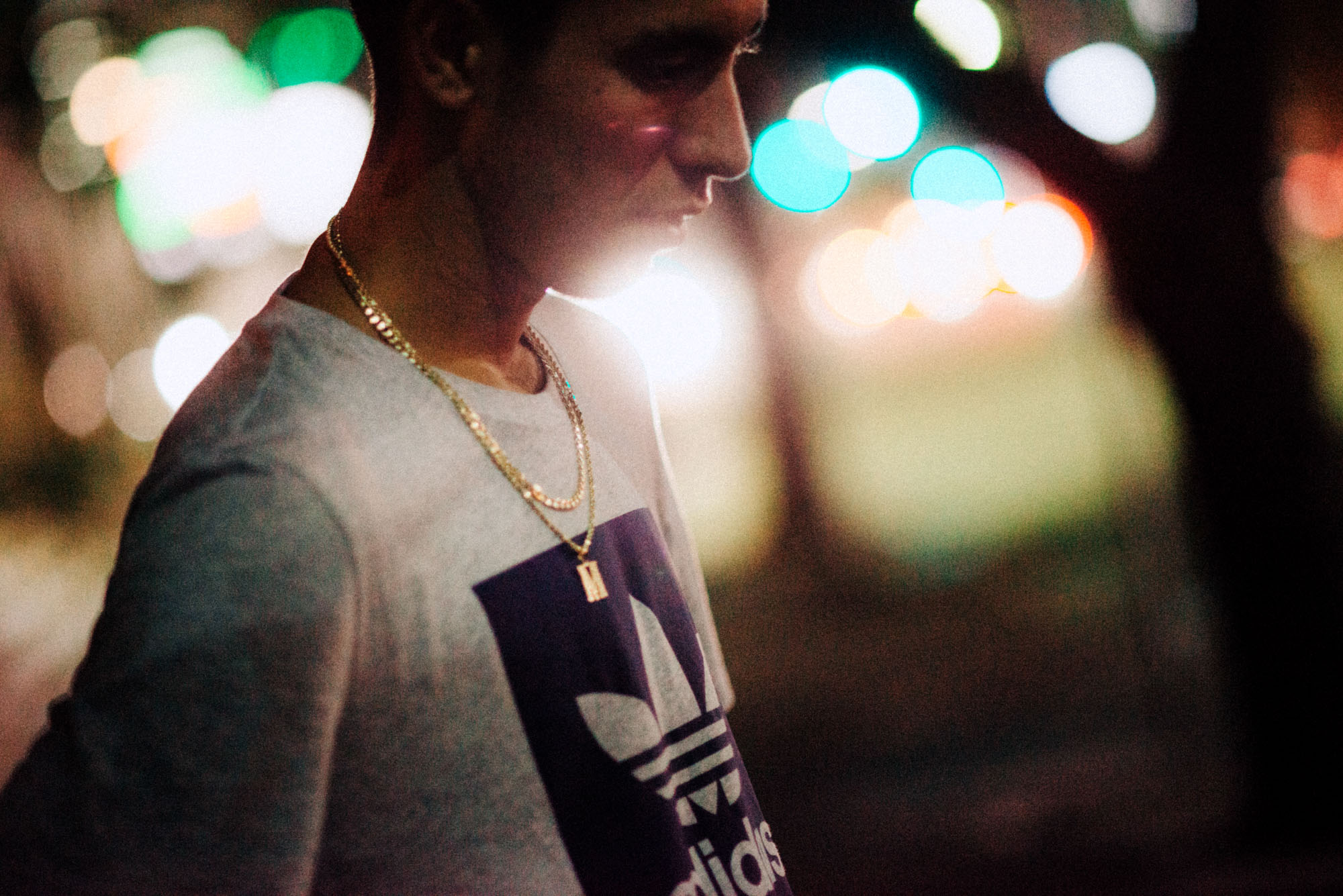