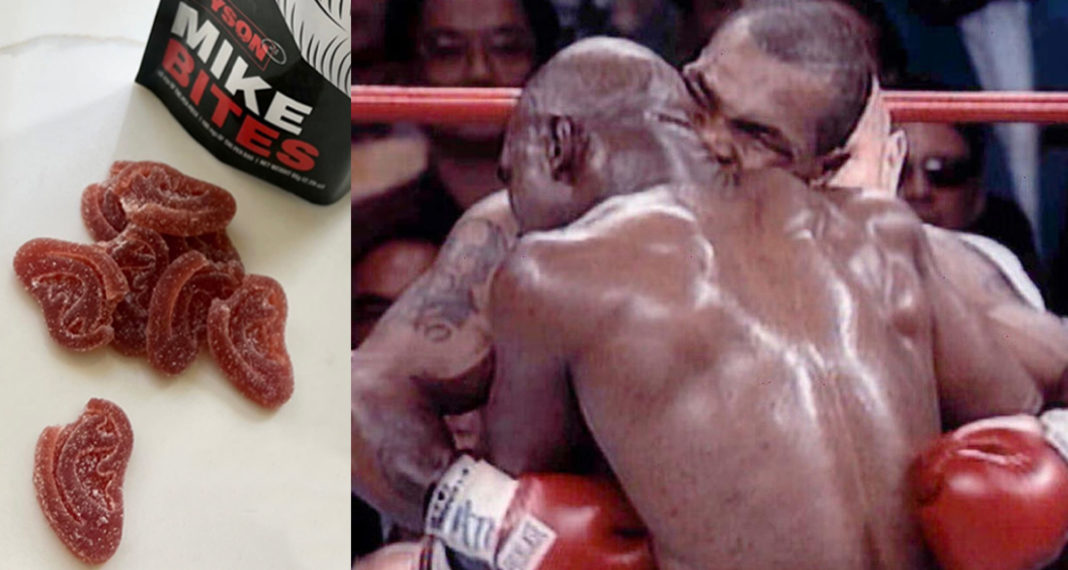 In 1997, heavy-weight champ Mike Tyson lost his cool in the ring and took a bite out of Evander Holyfield’s ear.

The sporting world was aghast. After all, boxing is a gentleman’s pastime, and you don’t just eat another gentleman’s face handles. The incident was bloody and horrific, and a few people in the front row did sick in their popcorn.

But that was 25 years ago now—which, when you think about it, is basically a quarter of a century—and since then Mike has paid a $3M fine for his behavior, and Holyfield has completely forgiven him. ‘Mike bit me,’ he said in an interview with The Daily Mirror, ‘—I say I bit somebody too. It just wasn’t on TV. I bit a guy in his shoulder, he dropped me, and I didn’t know when you had a concussion, you’ll bite too.’

So, now the smoke has well and truly cleared, Mike Tyson has decided it’s not weird at all for him to manufacture and sell ear-shaped THC snacks called ‘Mike Bites’. They even have a little bite out of them like Holyfield’s ear. Holyfield completely backs the product, so you’d hope he’s getting a kickback of some sort.

Tyson first opened the gates of his first 40-acre cannabis farm, Tyson Ranch, in 2018, and in 2020 it was reported he was raking in $1M per month in sales through Tyson 2.0 products